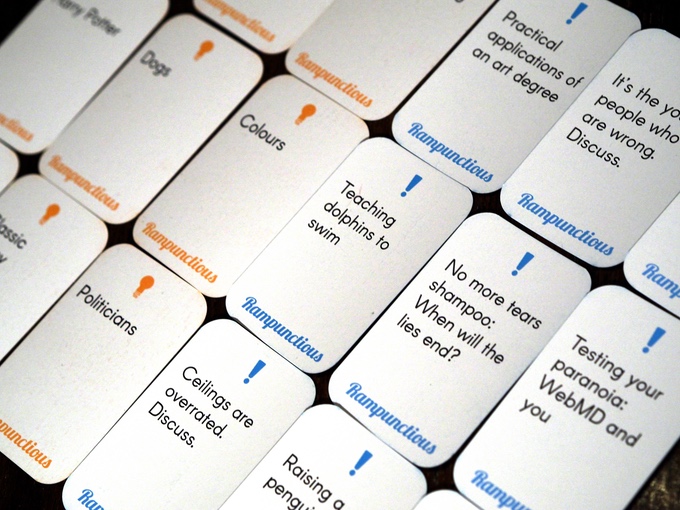 I take it as a point of pride that many people I know have an instinctive fear of my voice whenever the pun train starts rolling. Things get off track, the bad jokes are full steam ahead, and for a good few minutes everyone gets increasingly steamed up as my horrible wordplay keeps chugging along. For those of you that don’t rail against this foolhardy exercise of wit, Rampunctious’ Kickstarter would be worth a look. With a print and play already available for interested parties, there is a lot of fuel for gamers who want to explore their punnier sides.

The premise and rules of the game are both built for ease of access to groan-inducing one-liners. The game consists of a deck of 180 Topic cards, 50 Scenario cards, and 20 Cringe cards. The goal is to accumulate 10 of these Cringe cards, and the method is punishing, obvious, terrible, glorious puns. Scenarios are broad prompts that will ground your puns in rough parameters so you have some room to base your jokes on. These can be anything from Discovering a New Color to Ruling Antarctica as a Benevolent Dictator. The Topics are how you funnel those jokes, inspiring you with humor and the rest of the table with reluctant laughter or judgemental head-shakes. They are similarly wide-ranging all around such as James Bond, France, or the Hunger Games.

At the outset, each player gets 5 Topic cards, and play starts with whoever can make the best pun based on their own name; that person becomes that round’s judge, or Pundit in this case. That player flips over a Scenario card and lets everyone else have at it. They combine their Topics and the Scenario, punning away at will for as long as they can stay relatively on topic. Whenever a player makes a pun that forces everyone to recoil in disgust, the Pundit awards a Cringe card which, if you choose, can count as extra points at the end. The Pundit also grants the Scenario card to whoever they believe made best use of their resources, and then the round shifts to the next player. Once someone accumulates 10 points (made up of Scenario and possibly Cringe cards), they have won the game and likely lost some friends.

The prompts are creative, though niche to the point that not everyone you would want to play a party game with will necessarily recognize them. Discworld, for instance, is a powerful source of references, but only in the circles that are already familiar with it. Rampunctious also relies on its players more than anything else to create a fun experience, providing a rough framework in the hope that you can make something great out of it. You will find yourself surprised at how creative you and your friends get trying to combine Nicki Minaj, Monty Python, and the X-Men with the Decline of Mittens in Modern Society.

Where you don’t find creativity, however, you risk running through a lot of frustration. It’s very clear that not everyone will get a game based around puns, and not everyone will want to. Additionally, the more funny prompts are also at times the most specific, which limits your options greatly. (What exactly are you supposed to do with “No more tears shampoo: when will the lies end?”) Sometimes, you will sit there for a few minutes to scrounge something together just to end up with a few adequate jokes.

What is certain here is that the strange mixture of references and prompts will create a ton of variety. There are a few moments in this game that set off crashing waves of laughter when someone slots the right jokes together and someone looks like they are in physical pain. You will be surprised with the ideas people come up with, even if they have to play fast and loose with their topics to do it. Integrating the Cringe cards as a mechanic gets people to work that much harder to put their best foot forward to make the worst joke possible. It’s safe to say my first few rounds of Rampunctious left me with some jokes that will take me weeks to get over.

Those games, which took around an hour each, had some great highs and a few lows when people were trying to take time to make the most of their hands. Getting the most out of Rampunctious is not easy, and it takes the right kind of mind to see everything it has to offer. Most of the time, however, our games were fast-paced, unpredictable, and filled with ludicrous energy.

If this sounds interesting to you, or if you need an excuse to punish some people with your wit, check out the Kickstarter for more information. As it stands, it’s only physical production that Rampunctious needs to get into players’ hands, and a full print and play of the game is available right now.