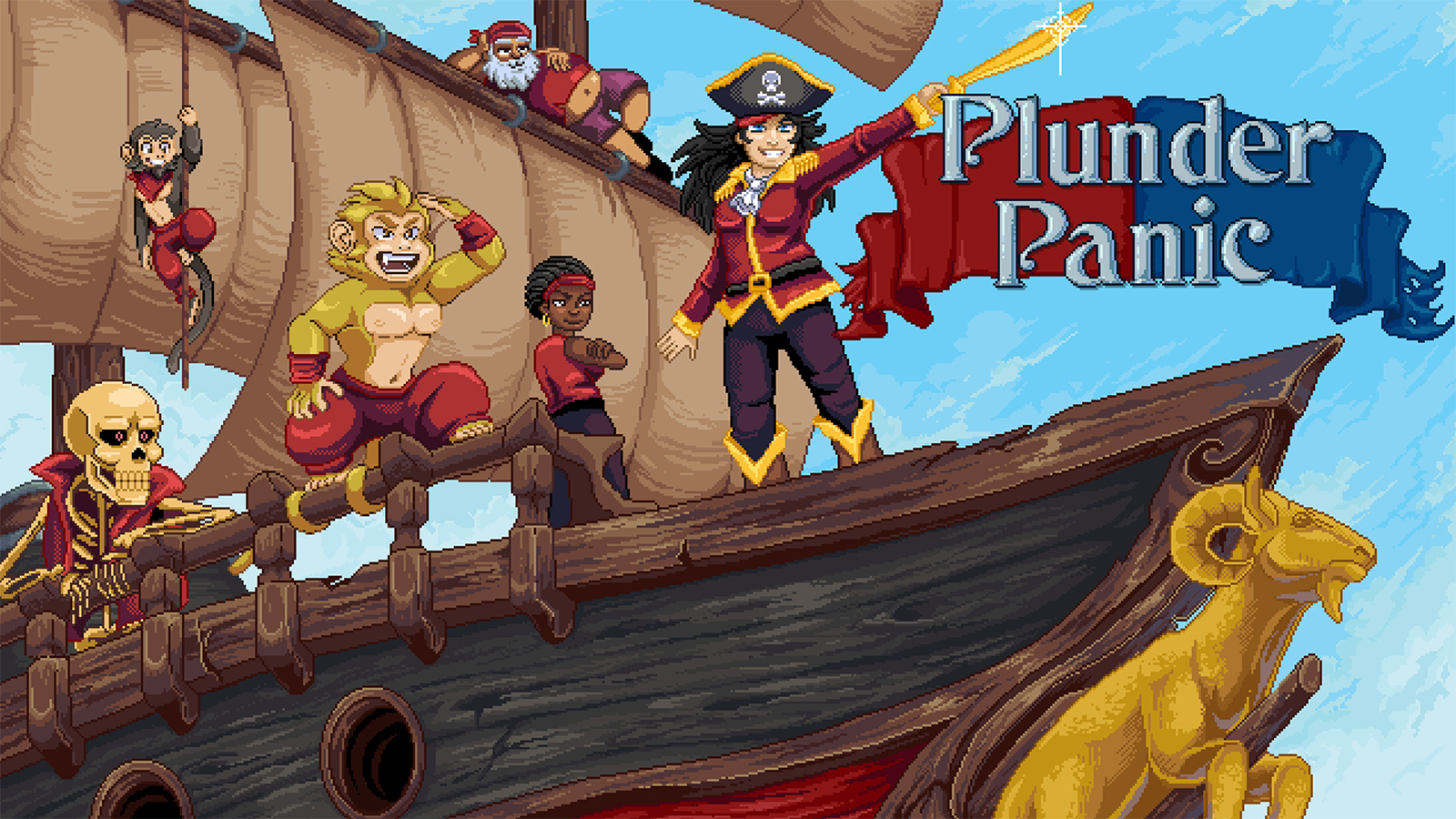 As I play Plunder Panic (say that three times fast), I’m reminded of the days I used to sit in my garage playing on my Commodore 64. There’s a simplicity about the way this Early Access 2D brawler looks, sounds, and plays, but it doesn’t feel outdated. It has 1080p support and I could crank the stable framerate to my monitor’s max of 144hz, but most of all, Plunder Panic lives up to its name. It’s a chaotic multiplayer with up to 12 people and has a competitive element that brings more strategy than you might expect. It could use some work with combat and hitboxes, but even just playing against bots, it’s a lot of fun.

The basic idea of Plunder Panic is to collect a certain amount of treasure before the other team. Each of the five maps has piles of gold on different platforms waiting to be collected, so you and your crew have to plunder the treasure and hop it back over to your treasure chest. If there’s no more treasure to grab on the map, both teams can invade the other’s ship and take the loot from their treasure chests. It’s a fun back and forth, but it’s intensified by the fact that there are three other ways to win the game.

While teams are running and jumping over each other trying to snatch gold, you can also grab cannonballs and load them into the cannon, which sets off a fuse. The enemy can stop it by cutting the rope, but if not, it’s going to put a gaping hole in the enemy’s ship. If you’re able to blow three holes in their hull, you win. Meanwhile, someone else could be after your Captain. Each team has one Captain who has a certain number of lives. If a Captain loses all of their lives, the match ends. Or, perhaps, you decide you want to hop in a boat at the bottom of the map that’s loaded with explosives. If you’re able to row the explosives to the opposing crew’s ship, that’s game. However, an enemy crewmate can hop in the boat and try to counter-row and slow you down or just get in and kill you. Everyone’s fighting over all of these win conditions at the same time, which is what causes all of the chaos. It’s a lot to keep track of and I lost a few rounds trying to keep the enemy from doing one thing, only for the match to end because I didn’t realize the team was dominating in another way. There’s no shortage of panic when you feel like everything is out of control, but it’s an energizing sort of panic, and it feels really good when you’re making the other team scramble because you have them on the ropes.

There are a couple of ways to sway matches in your favor. Captains not only have a certain amount of lives, but they also automatically come with a sword and can take two hits. Everyone else can only take one hit and has to buy a sword using a bag of loot, so the Captain can be more aggressive and attack defenseless enemy crewmates or try to take the other captain’s life. Or the captain can sit back and defend the ship if too many enemies are invading. But if multiple teammates buy swords, you can be way more aggressive. On the flip side, if you’re buying swords, you’re not banking loot. But maybe that’s not how you want to win, so you’re okay with spending treasure for steel. Or maybe you just want your Captain to go straight for the other Captain and win the game by dueling. All the either/or scenarios add genuine competitive depth, so while it feels chaotic, you can strategize to come out on top.

I am concerned about the combat, though. It seems like the hitboxes could use some improvement and the invincibility for Captains seems inconsistent between a real player and a bot. Jump-slashing at an enemy from below them is way too effective, and you can do a downward slash like Link’s Down-air in Smash Bros., but a few times I died from a bot that stood there and just neutral attacked at the right moment and killed me even though I was above them. There’s no way I should be punished for catching my enemy beneath me. And when a Captain is hit, they have a moment of invincibility indicated by their body fading and flashing, but when two Captains are hit at the same time and they’re slashing at each other while waiting for the invincibility to run out, I died even though my body was still flashing and ghosted.

If all the win conditions aren’t enough to create panic, throw items into the mix and it gets really zany. One item gives you wings to fly for a limited time which is really useful to plunder loot. Another item unleashes volcanic balls of fire down on the area it’s in, delivering an instant KO when touched. Another item looks like a Kraken doll that you can shoot at your foes and cover them in ink. That summons the actual Kraken who will track you and pull you into the watery depths if you’re not high enough to escape its quick grasp. 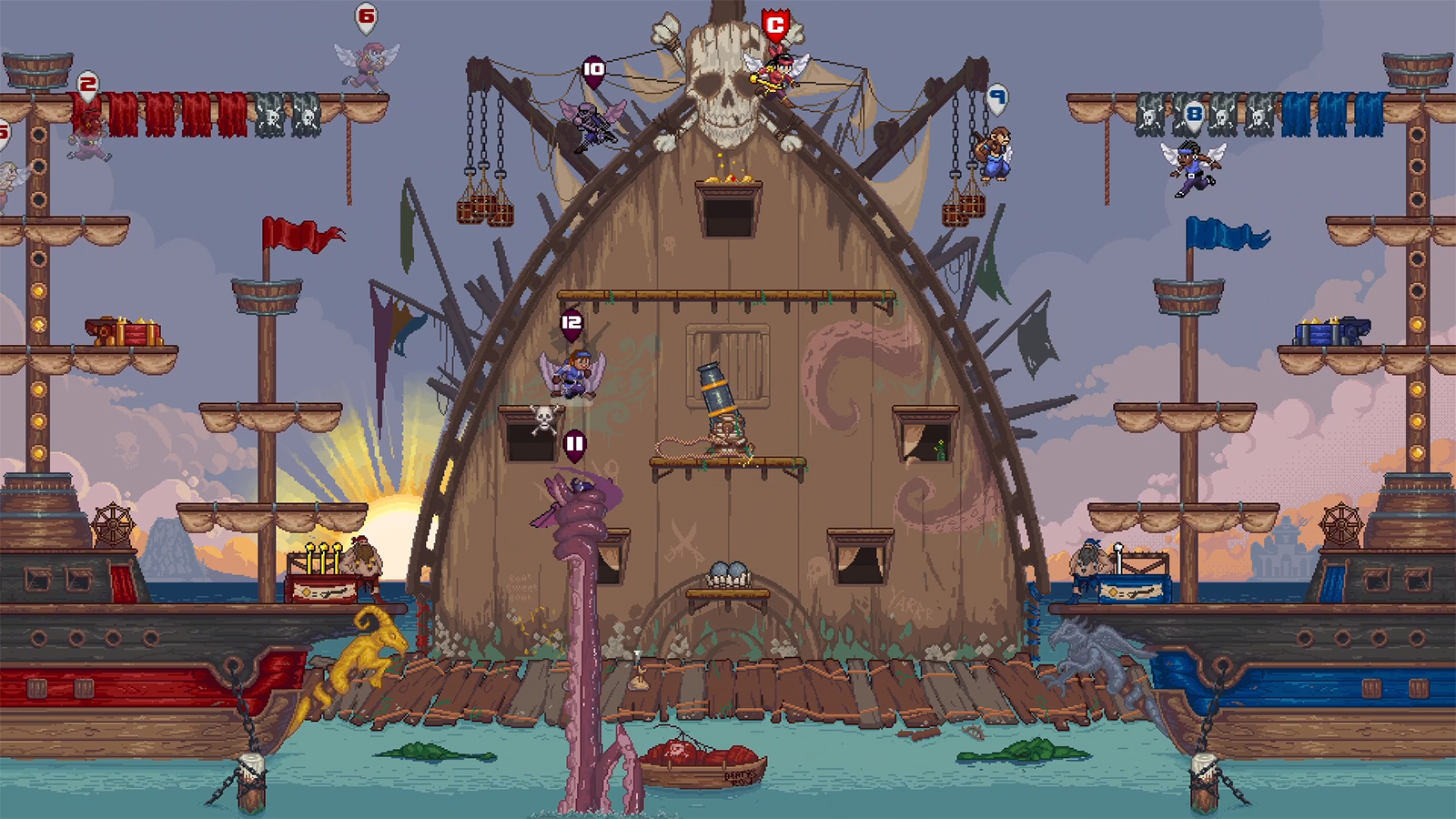 If you’re bored with the default way to play, there are other variants to mix things up. Normally only one person is a Captain per round, but you can choose a variant that picks a new Captain randomly each round – one of my favorites. Another one of my favorites makes no one a Captain, so everyone has to buy swords and dies in one hit. The different modes add variety and change how you approach winning each match.

I’m happy to say that Plunder Panic includes bots. I’ve played too many indie games that include multiplayer only to find out it’s exclusively couch co-op. But Plunder Panic has couch co-op, up to 11 bots, and will include matchmaking later, which is exciting.

Plunder Panic is shaping up to be a solid fun-with-friends good time or even a competitive multiplayer game. So far it has the right depth, it has the right amount of chaos, and it has a good amount of options to keep games fresh. I have some concerns about the combat, but since it’s in Early Access, there’s plenty of time to sort those issues. Plunder Panic is available on PC right now in Early Access, and it’s set to release on consoles in Q1 2022.