Your life is a toot. It’s such a toot that you’ve decided to completely upend it and move to Badgetown on the mainland, where the friendly creatures called Ooblets aren’t banned. Upon arriving with nothing but the clothes on your back, Mayor Tinstle gives you the local farm and a tiny shack to start your new life. You also join an Ooblet club and get a tiny dancing creature of your own. What adventures are in store for you in Badgetown? Let’s find out.

After that short introduction, you’re essentially left to your own devices. There are tasks to do for Tinstle, Tinstle Tasks, to unlock new buildings or areas but you can do all of that at your own pace. While part of the game is a farming simulator, there are no seasons or even a calendar of any kind so in turn there are no deadlines or rushing to get something done before a holiday. While this can make every in-game day feel too similar, it’s very relaxing to feel like after I’ve watered my crops for the day I can just talk to townsfolk and do whatever comes to mind until I run out of stamina. And there is quite a lot to do in Ooblets, from farming to battling you’ll rarely be wanting for things to do. There’s always new Ooblets to battle and grow, new quests to do, and new things to discover. 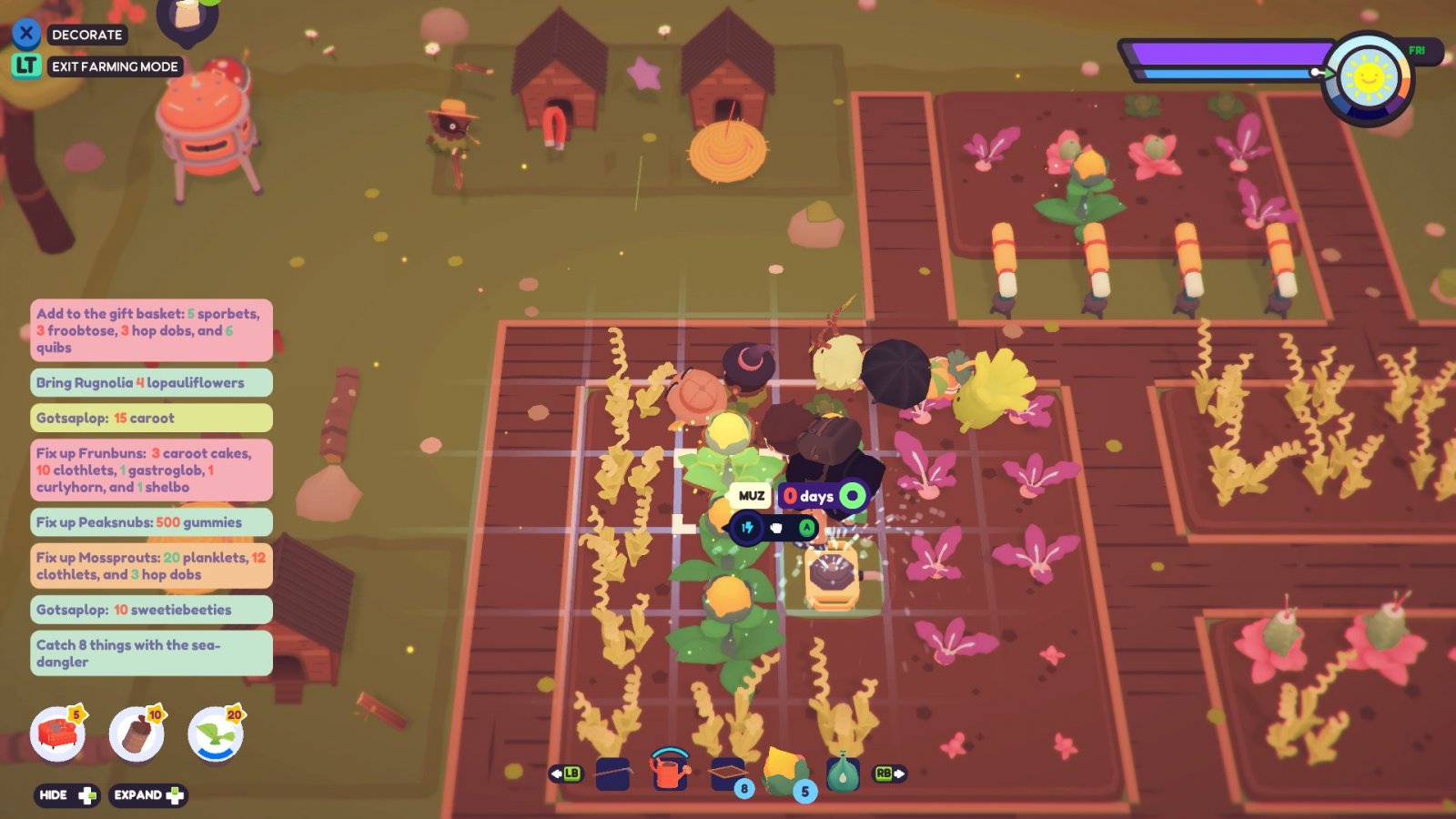 The other half of Ooblets is the dance battles. While the farming and life-sim aspects are inspired by games like Story of Seasons, the battles take inspiration from Pokemon. When battling, you choose a few creatures from your “Follow Babies” to be in your dance squad, usually the same amount as your opponent. The goal of battles is to earn a certain amount of points before the opposing team does the same. You do this by selecting dance moves in the form of cards. While there are cards that all Ooblets can use, each Ooblet adds their specific cards to your deck and gains more upon leveling up. For example, my little robot son whom I named Beans has a card that will make the next dance move occur twice. Each turn you’ll get a random new hand of cards, and you’ll have to strategize which cards to use in which order because you only have a limited number of Beats to spend on said cards. Once you end your turn, your opponent will do the same and that will continue until someone wins or you run out of time. It’s a simplistic battle system with a ton of customization and depth that makes it so much fun. It also helps that the game is super cute; I can’t get enough of these adorable plant/animal/robot things all dancing in unison or wearing funny hats. I do have a few criticisms of this battle system though. First of all, it’s way too easy. Outside of tournament battles, at no point did any of my opponents come anywhere near the point goal and the closest I ever came to losing a fight was running out of turns, though I always managed to win before that happened. I don’t mind the game being easy, far from it – I think it adds to the relaxing and casual vibe the game has going on, but I do feel a bit bad crushing everyone into dust. Only a little. Second the camera angles get very repetitive, it essentially always uses the same slow zoom out for all actions which can make battles boring to look at. And I want to see my cute lil’ babies dance from other angles. 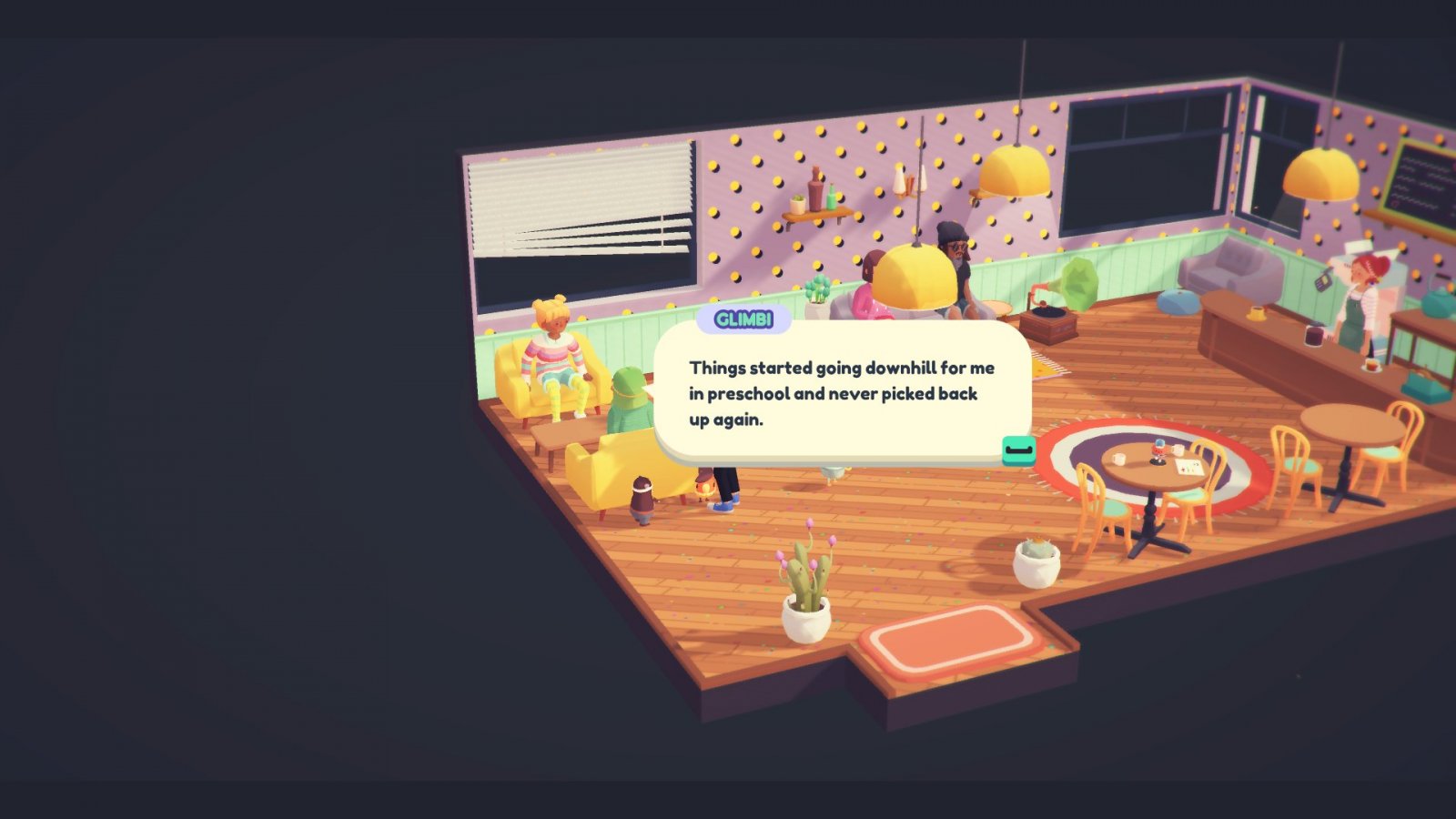 Ooblets is currently in early access, so that means you can’t progress past a certain point and it’s pretty glitchy. I’ve encountered glitches of all kinds from missing or placeholder text to getting out of bounds way too easily to softlocking the game entirely. Thankfully the game saves your progress very frequently, so none of these could ruin the experience in any way. If you enjoy games like Stardew Valley or Pokemon, you really owe it to yourself to check out Ooblets. It’s incredibly fun, charming, and hilarious if a bit rough around the edges at the moment.