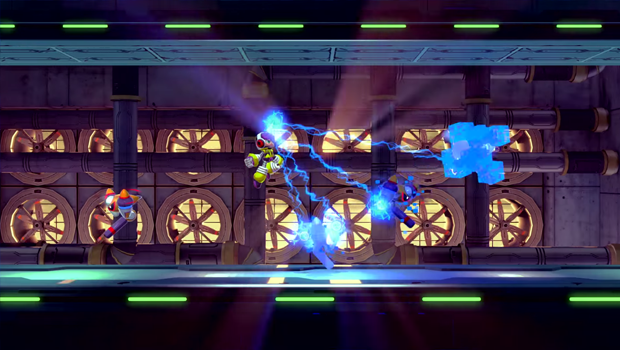 Mighty No. 9 is one of the original Kickstarter darlings, and it looks like we’re finally going to be able to get our hands on it.  I was able to get some hands-on time with the title at Deep Silver’s E3 2015 booth, and I have to say that, while it does come from Mega Man mastermind Keiji Inafune, it is far from a clone.

The core of Mighty No. 9’s gameplay is the dash mechanic, which has players dashing through wounded enemies to convert them into points.  The faster you dash into an enemy after shooting them, the higher the point value, and if you dash into enemies quickly and in rapid succession, you can build up a multiplier.

The depth of strategy is surprising in Mighty No. 9.  Not only does the game’s hero, Beck, gain skills from bosses he defeats, which allows the same varied approach to levels familiar in games like Mega Man, but also he gains more generic abilities from enemies dotted throughout levels.  For example, red enemies make Beck’s bullets travel through enemies, highlighting them for dash-destruction.

Levels are constructed so that you can keep enemies, but it takes some forethought.  Where my strategy of dashing through enemies as quickly as I could worked, one of the game’s developers showed me how planning which enemies to attack first and quickly deciding the best opportunity to dash can net a many more points.  Snap decisions and score chasing make Mighty No. 9 a chance for a competitive speedrun community to blossom, but it remains accessible enough for entry level players to blast their way through levels at their own pace.

Bosses present a challenging change of pace after the speed offered by the game’s lengthy levels.  Each one requires a combination of clever dashing, weapon usage, and pattern recognition with which any Mega Man fan is familiar.

Mighty No. 9 feels like the logical progression from the Mega Man games of old.  Polished gameplay and demanding but accessible level design perfectly balance and meet the demands of hardcore and casual players.