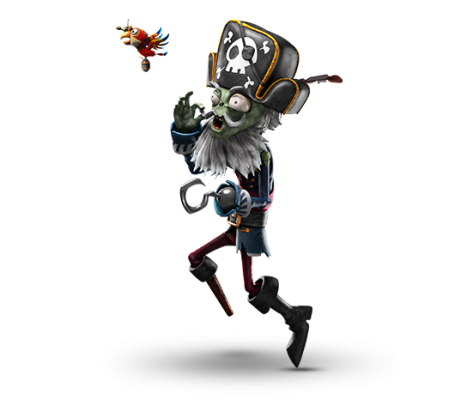 Plants vs. Zombies: Garden Warfare 2 introduces six new characters classes (three plant classes, and three zombie classes). The Imp, Super Brainz, and Captain Deadbeard join the zombie horde, while Rose, Citron, and Kernel Corn come to the plants’ aid. Here’s an overview of each of them:

Captain Deadbeard is a seafaring zombie with many unique tools at his disposal. He can use his parrot as a drone to dispatch enemies remotely, and can hide in an explosive barrel and detonate it when the timing is right. For a more direct approach, he can also fire a cannon at his opponents.

The Imp is a small creature, but don’t let his size fool you. He packs a punch with his insane area-of-effect pistol attack called “Impkata,” and his paralyzing “gravity grenade.” When backed into a corner, the imp can also use his “Robo Call” ability to call in a giant mecha, which turns the somewhat squishy class into an absolutely devastating tank.

In addition to having an excellent fashion sense, Super Brainz is all about dealing tons of damage over a short span of time. From afar he can fire a laser from his wrist, and up close he uses a barrage of melee attacks. His leaping abilities allow him to close large gaps fairly easily as well.

Citron is an orange from the future, with an arsenal of advanced technology at his disposal. His EMPeach attack can disable machinery, including The Imp’s mecha, while his energy shield provides him with added protection against incoming attacks. Citron’s greatest ability however, is in being able to to turn into a ball and roll around quickly. While in this mode, Citron also gains additional abilities, including a ramming attack that deals heavy damage.

Kernel Corn is a warrior with an arsenal of military weapons at his disposal. He has the ability to call in a hail of explosives from above with his “butter barrage” ability, and can fire grenades using his “shuck shot.” He also has a husk hop ability that allows him to jump into the air and shoot everything below him.

If you’re looking for a more versatile class, then Rose might be more your speed. Rose is a magic-user who can use her magic to trap enemies and leave them defenseless, and can become intangible and invulnerable for brief periods at a time. Most importantly though, she can turn opponents into a goat, which makes them nearly useless in combat.
There you have it! These are the six new classes you can look forward to playing in Plants vs. Zombies: Garden Warfare 2, which launches on February 23rd, 2016 on PS4, Xbox One, and PC.