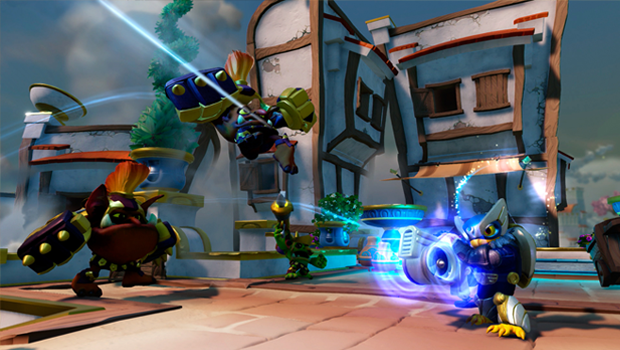 In SuperChargers, you play as a Skylander defending Skylands from the evil Kaos, who threatens the world with his “Doomstation of Ultimate Doomstruction,” which is capable of eating the sky.  With the help of Skylanders known as SuperChargers and all new land, sea, and air vehicles, the team has to protect the citizens of Skylands from Kaos and a returning foe, The Darkness.

The most groundbreaking addition to the franchise overall is the inclusion of vehicles.  Each vehicle type has two weapons as well as a special movement ability.  Cars can drift around corners, planes can barrel roll sideways, and boats can submerge themselves.  The 20 new car statuettes are highly detailed, many of which articulate in one way or another; the most intriguing of which was a car, which had wheels that actually rotate, turning it into a fully functional toy.  Unlike every other toy from the series, there’s no pedestal attached to the bottom of vehicles, so playtime is unhindered by discs.  Be careful handing some of the undersea vessels to kids, though — they aren’t waterproof.

Along with the vehicles, a new class of SkyLander, the SuperChargers, bring new attacks and unique interactions to the world.  These heroes, when paired with their own specific plane, car, or boat, can SuperCharge them, powering them up and altering the appearance.  SuperChargers can also customize their own signature vehicles, changing their stats and appearance immensely.  For instance, Hot Streak is a car that can be powered up and customized by Spitfire, a dragon-like creature that is mostly made of blue lightning.

Skylanders SuperChargers is compatible with the massive library of over 300 figures that have been made available over the series’ lifespan.  They won’t be able to power up any vehicles, but will be able to play through the game’s platforming sections and use any vehicles you may have in your collection.  Even traps from Skylanders Trap Team will have some use in the game.  SuperChargers will require the use of either an all new portal developed specifically for the game or an extension for your old one.

Vehicle sections do a great job breaking up the hack-and-slash gameplay offered by Skylanders SuperChargers, but they are completely unnecessary to finishing the game.  If someone wants to hop straight into the world of Skylands without a car, they’ll be missing a large portion of certain levels, but they’ll be able to hack and slash to their hearts content, as well as use any other boats or planes they do own.

Skylanders SuperChargers gives Portal Masters a whole new layer of depth which changes up the formula of Skylanders completely.  The new vehicle segments are an incredible way to change pace, and added customization will appeal to the more advanced kids who want some more depth of gameplay, but also still want to play with their Skylanders figurines.

Skylanders SuperChargers will be coming to PS3, PS4, Xbox 360, Xbox One, iPad, and Wii U, along with a complementary offering on Wii and 3DS in North America and Europe on September 20th and 25th respectively.  Check out our YouTube channel for gameplay footage later today.