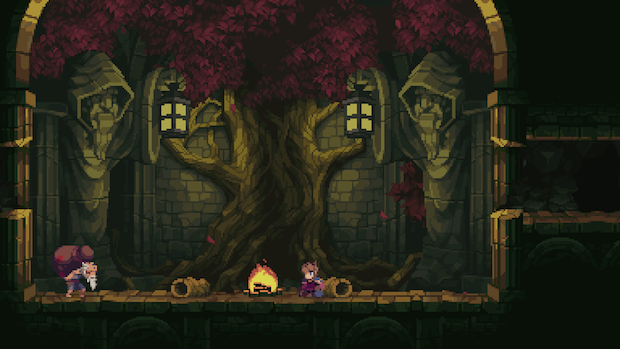 Metroidvania is a term that gets a little over-used. It isn’t very descriptive and demands knowledge of two games and their inner machinations to understand. However, it does aptly describe the relationship between this last year’s Axiom Verge and the upcoming Chasm.

“If Axiom Verge is more Metroid, then Chasm is more -Vania,” Dan Fessler of Discord Games told me before my demo. The two titles were essentially sister games, developing along similar paths but accentuating different strengths of the genre.

Chasm puts you in the shoes of a young soldier, sent to investigate a mysterious mine. As you descend deeper into the chasm of the mines, things get stranger and monsters become more numerous. There is a darkness in the chasm, and you’re the only one who can cut it out at the roots.

Those who have spent time with Castlevania will feel immediately at home, as Chasm emulates many of the conventions of the series excellently. You have your primary weapon and a secondary slot that consumes mana to use, like a magic bottle or throwing knife.

There’s a tinge of Megaman inspiration in the platforming, though, as segments require you to precisely move between single-block platforms while under fire or within a small timing window. One area had me jumping between blocks to climb a small expanse, but each block had a timed spike platform on it – one wrong jump, or any hesitation, and I was sent hurtling into the pit below.

It was difficult, but in the way that encouraged me to focus and try again. Chasm pushes you to adapt to new challenges on the fly, to use every tool available and sometimes make pixel-perfect leaps in order to progress.

This comes across even further in the level design, a strange mix of preset areas and procedurally generated sections. This mix, Fessler told me, would hopefully keep players coming back for new challenges after already beating the game once.

Enemies are a standard set of monsters: skeletons, bats, and the like. You can expect the usual suspects to appear, but they aren’t as easy to topple. Many hover in difficult spots to hit, or use abilities to damage you and dodge your attacks. Much like Castlevania, even normal mobs can give you difficulty until you learn to adapt to their patterns and style.

I had one brief run-in with the boss of the demo, a floating undead mage who could launch orbs of magic at me or make them rotate around its skeletal corpse. It was difficult, but rewarded those who experimented with the game’s tools. I quickly learned that my magic bottle could tick damage on the boss several times, so I went to work chunking jugs of holy water at it while dodging orb attacks. I failed to take it down, but I felt invigorated and ready for a second shot.

The art style of Chasm is also wonderful, using pixels but not relying on the simplicity of the format. Each area is lush and unique, a new sight and sound that feels very different from the one before it. Fessler, a background artist for Discord Games, told me that the team set “chromas” for each area and then built from there, in order to make each one feel unique and individual. The result: a game that brings up thoughts of “retro” and “pixel indie,” but in a way that looks gorgeous even by today’s standards.

What I saw was a small slice, but it showed a definite blueprint for something as engaging and exciting as Axiom Verge was this past year. Chasm isn’t just a -Vania title, but one that looks and plays like you remember them rather than what they actually are. It’s got a lot of potential to bring that style into the modern indie scene with gusto, and one to watch for those looking for their next dungeon crawl fix. You’ll be able to nab this one on PS4 and Steam sometime in 2016.