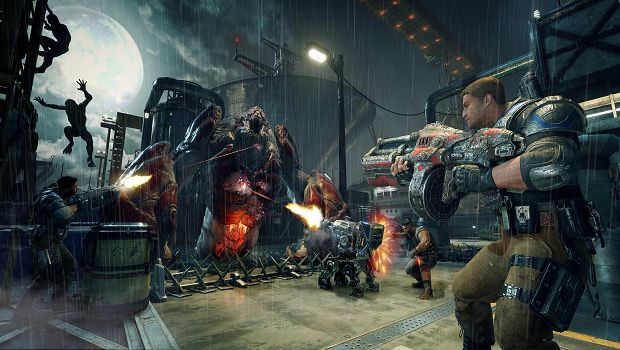 Gears of War 4 had been making me nervous. Knowing that Epic Games is no longer involved in the development of an IP that I’ve spent so many hours playing and have been so passionate about has made me apprehensive about its future. During PAX West 2016, however, much of this was put to rest. Although I didn’t get to try out the upcoming campaign, I finally did get to cut my teeth on Horde 3.0, and damn, did it feel good.

There are some new additions to Horde mode this time around. First up is the Fabricator. Before the initial round, you and your team must grab the Fabricator crate and place it somewhere on the map, providing it’s not against a wall. This crate serves as an HQ or a base of sorts, so it’s imperative to drop it somewhere that is strategically advantageous; it’s good to look for an easily defensible position with solid lines of sight. The Fabricator allows your team to purchase new weapons, fortifications, and defenses like spike strips and turrets. It’s also a drop off point for Power, the currency that you collect from vanquished foes and the resource that enables you to buy new equipment from the Fabricator. If one of your buddies is sawed in half or pulped by a Boom Shot, you can grab the COG tags from their corpse (or what’s left of it) and bring them back to the Fabricator. If you’ve got the currency, you can resurrect your friend and put them back in the fight.

Classes are the most obvious change in Horde 3.0. Before the mayhem gets underway, you get to choose from five distinct skill sets: Soldier, Sniper, Scout, Heavy, and Engineer. After that, you can further tweak things by deciding which Gear Cards to take into battle. Gear Cards have various perks like passive damage boosts, larger ammo capacity, greater active reload bonuses, etc. These two systems work extremely well within the heavily team-oriented boundaries of Horde mode. Whereas before, you could only differentiate yourself by aesthetics or weapon choice, now you can, and should, carve out a distinct role for yourself within the group in order to compliment strengths and cover weaknesses.

Pouncers, drones, robots, and other enemies are new to the experience as well. The Coalition has also introduced a few new weapons like the Enforcer, a close-range SMG, and a power weapon called the Buzzkill, and other firearms too. Thankfully, each of these additions fit right in with the franchise’s well established combat mechanics and overall experience.

Horde 3.0 did not disappoint. Chainsawing my way out of a corner, foolishly risking life and limb to rescue a downed teammate, or getting the perfect arc on your Boom Shot to reach out and touch an unsuspecting Locust across the map, are all fond memories I have of Horde mode. Whatever skepticism I had before going in has all but disappeared. Horde mode is back, and I’m happy to say it feels exactly as it should, with just the right amount of crazy.