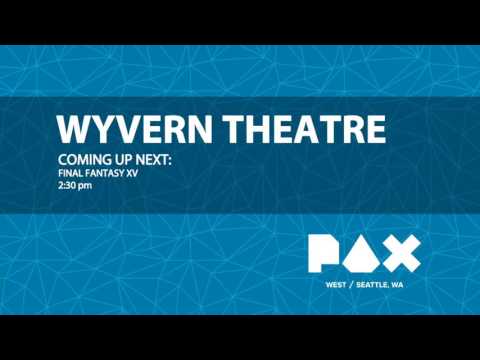 It’s unlikely that there are many games more highly anticipated than Final Fantasy XV. During PAX West, I had the opportunity to try it out for an hour. But before I go any further, I should admit that I’ve never played a Final Fantasy game before. Yes, you read that correctly—never. What this allowed me to do, however, was to come into the hands-on session with fresh eyes and relatively little bias.

Prince Noctis, with his entourage of Gladiolus, Ignis, and Prompto in tow, is on the way to wed his fiancée Luna when the car they’re traveling in breaks down. Not within easy walking distance of anything, the group is forced to push the car to the nearest town and await repairs. It is from here that my hands-on began.

Immediately, I was taken aback by the visual appeal of FFXV. Characters, especially during cut scenes, looked remarkable and real. The open-world that I traversed and fought in was gorgeous, and I spent a good portion of my allotted hour just appreciating the Duscaen landscapes, hoping to see as much of it as I could. This was helped by the autopilot driving option, which allows you to look around freely as your car is piloted by one of your team members to your destination.

While my three in-game compatriots and I were completing a hunting quest given to us, we fought a few different creatures, including some large scorpions and a big dino-rhino looking beast called a Two Horn. The combat was easy to pick up, and was very fast paced, with weapon switching, coordinated attacks with group members, and combinations being a large part of it. What made it so easy was being able to hold down the attack button and watch my character effortlessly string increasingly powerful attacks together, provided he was not interrupted.

As the enemies became more challenging though, I had to evade and retreat more often, which did add a welcome challenge. It also became readily apparent that equipping a weapon which attacked at a speed appropriate to the enemy I was fighting was key to winning an engagement. For instance, it was clearly unwise to use a slow moving, two-handed broadsword against a group of fast, agile enemies because it would make me highly vulnerable. It made more sense to go with the swift, one-handed sword. A great number of abilities, including magic, were available to unlock as well, which promise to bring more layers of sophistication to the combat system.

On the downside, dialogue between characters and NPC’s was lacking. The interactions felt forced and stale, and some of the accents that were chosen seemed not to fit their given character. Despite this, I did find myself laughing regularly at the absurd humor of the friendly banter and the quips thrown around during combat. Hopefully, the story will add more weight and significance to these tired interactions as it progresses.

As a first time Final Fantasy player, I was pleasantly surprised by how much I enjoyed the franchise’s latest installment. Although I only experienced an hour of it, I began to feel myself getting sucked into what seemed like a deep story and a grand adventure that would weave me through a rich and beautiful open-world. Square Enix has tried to make Final Fantasy XV appealing and approachable for both longtime fans and newcomers like myself, and in that, I think they have succeeded. It was not easy to get up and walk away.

Check out the Final Fantasy XV demo presentation from PAX West 2016 below: