Hunting has been a common practice for centuries now. People hunt for food and sport, with the latter practice becoming more popular in recent years. With the advent of technology, especially video games, those who want to hunt for sport without all the costs, energy, and gear required can do so in the comfort of their own homes. Hunting Simulator was one of these games, but next month its sequel, Hunting Simulator 2, will be available. You’ll still need to be patient and wait for the perfect moment to take down your prey, but it still beats how long you’d be waiting during an actual hunting trip.

As you might expect, the core gameplay revolves around hunting a variety of animals in different locales. After a short tutorial teaching you how to follow tracks, find your prey, line up and take your shot, and find the body afterwards, you’ll be sent off on your own. In this preview, I only had two locations available, but there will be several more in the full release; I could explore the Roosevelt Forest and Pawnee Meadows. Each location has certain animals that live there, which is indicated under the location name when choosing where you want to go hunting. Make sure you pay attention to what animals are in a certain location before heading out. You’ll want to grab the right gear so that you can actually hunt and bag your prey. 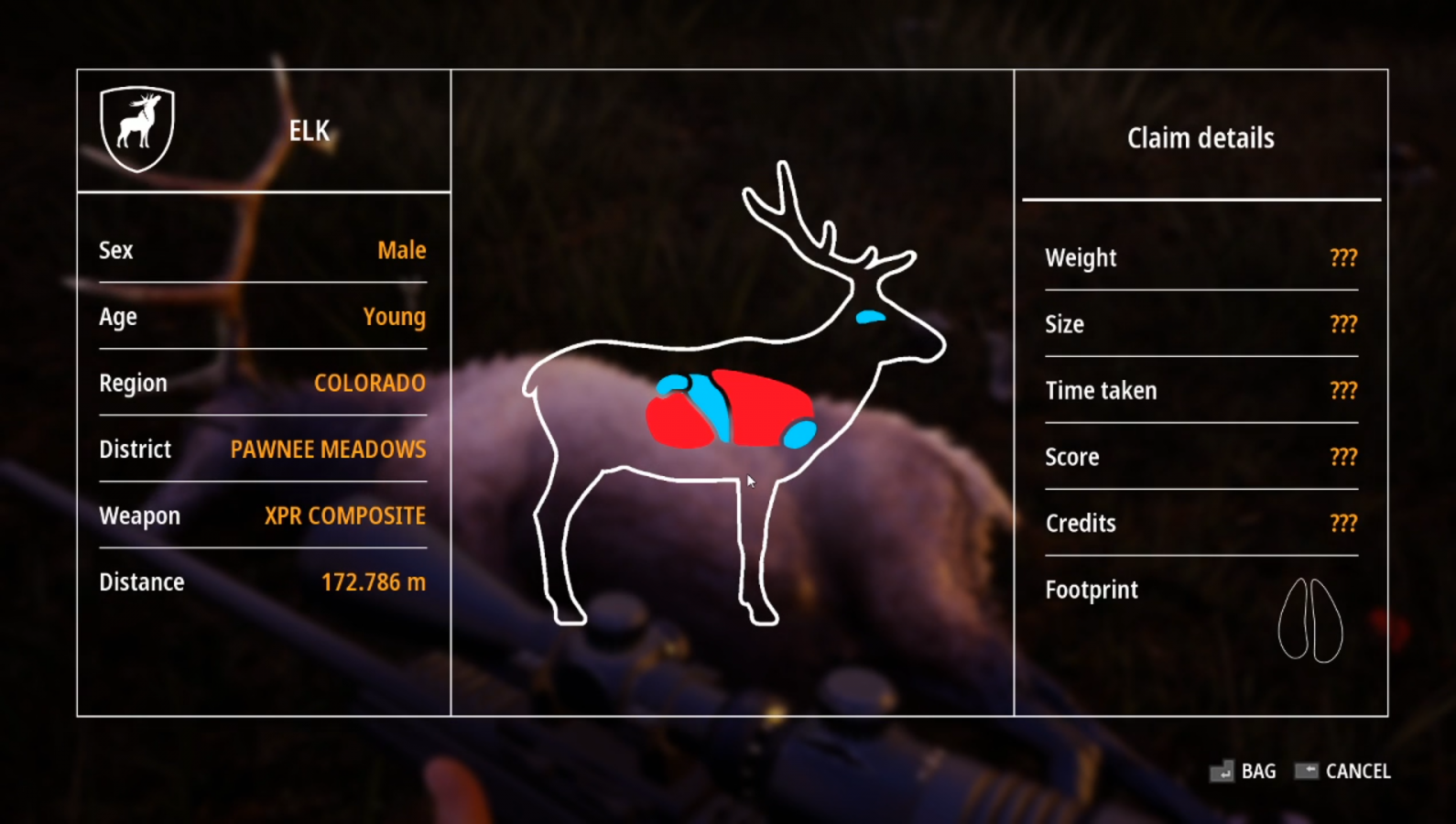 Before you head out, you’ll want to set up your loadout. This includes up to two weapons and six pieces of gear. Unfortunately, I was only able to use one of the weapon slots in the preview, so the second one must have been locked. I would’ve liked to test out how it felt to carry two different weapons that I could swap between easily, but it is what it is. You can carry sniper rifles, shotguns, sporting rifles, and bows. I personally preferred the sniper rifles, but some animals can’t be hunted with them. Smaller game like ducks and rabbits need to be hunted with shotguns and bows, so keep that in mind. Each weapon has multiple calibers, and every animal has a list of calibers that they can be hunted with. If you aim at an animal with a caliber not included in its list, then a warning will pop up to state that fact. You can still shoot and kill the animal, but you’ll be fined for breaking the rules. You will also be fined for killing female animals of certain species, but again, a warning will pop up to mention that. If you’re going to be a hunter, you need to at least follow some sort of code, right? In terms of gear, you have sprays that mask your scent, sprays that lure certain animals to a location, various animal calls, and more. These are useful to have if you’re having trouble finding animals.

Personally, I didn’t like having to adhere to the aforementioned rules; it meant that I could only hunt certain animals while holding a specific caliber. So I was left to either break the rules and be fined, or to let the animals escape until I went back to the cabin and swapped to the correct caliber. Don’t expect those lucky animals to be where you left them though, because they’ll likely wander off as soon as you leave. When you’re out in the hunting area, you start at a cabin before venturing out. The cabin allows you to change your loadout, refill ammo, claim your hunted animals, and return to the lodge to end a hunt. Make sure you claim all bagged animals before you leave or else you’ll lose out on them. Each bagged animal can be sold for money or turned into a trophy to hang up in your lodge. I opted to sell everything so that I could afford more weapons, gear, and licenses. 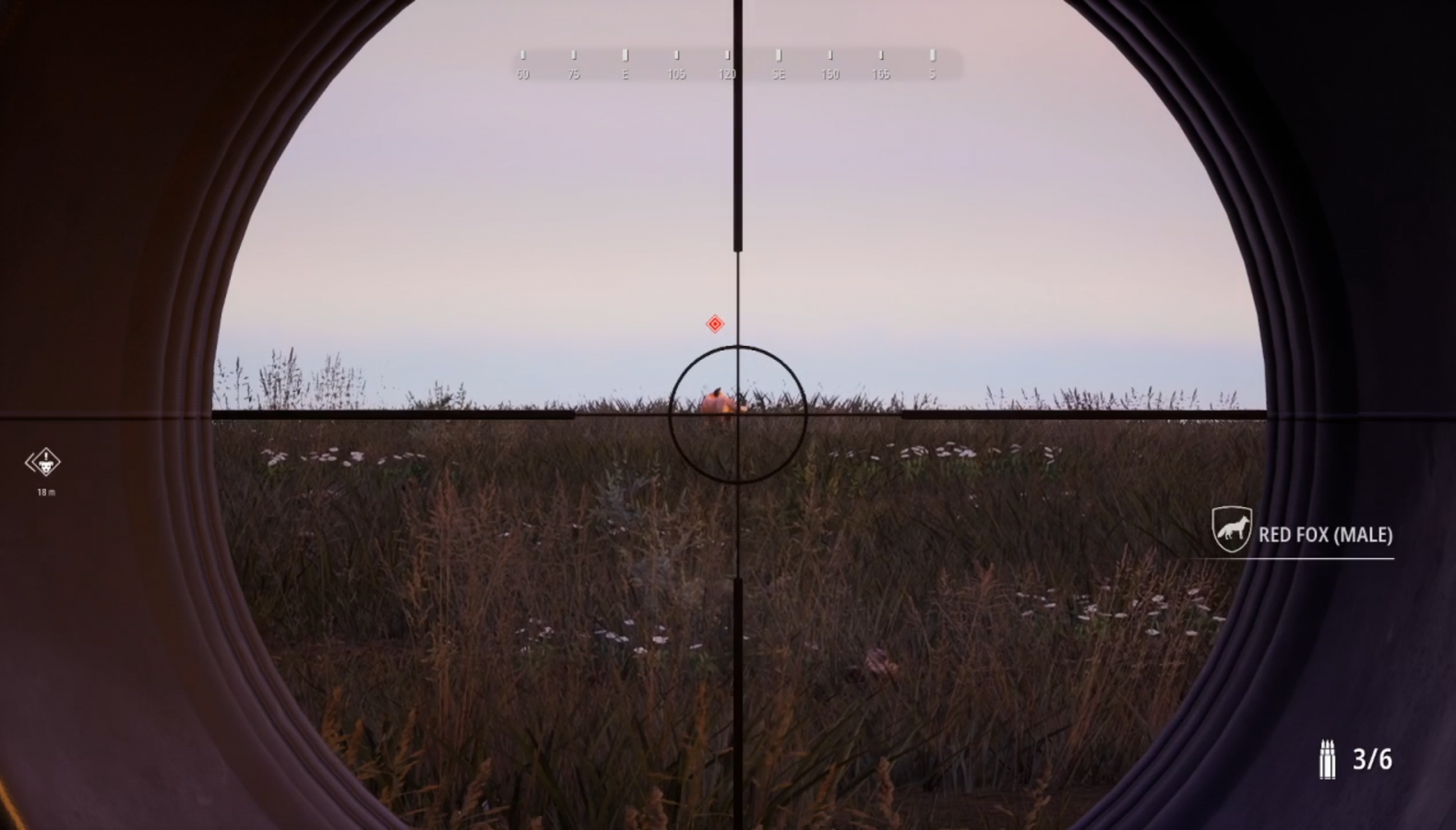 Speaking of licenses, you can only hunt animals that you’ve bought licenses for. Each license is good for a designated number of that animal, which means you’ll have to get a new license after reaching that goal. It’s an interesting system, although it’s not fun having to renew licenses. Thankfully, they aren’t too expensive, so at least there’s that. You can purchase licenses, along with weapons, gear, outfits, and more on the laptop in your lodge. Guns can get expensive, and you have to buy each caliber separately, so keep that in mind. If you want to get every caliber, it’s going to take a lot of hunting and selling in order to afford it all. If you want to do plenty of hunting, at least you have more of a reason to do so.

For anyone who’s played shooters on PC, you already know most of the control scheme for this game. Aiming and shooting are the typical controls, so don’t worry about that. As you walk around your hunting grounds, you’ll want to search for tracks in order to follow and find animals. You won’t have to do it alone because you get a canine companion. I only got the Beagle in the preview, but there will be a few other breeds available in the full game. You can tell your dog to follow tracks and help lead you to the animal. They will occasionally stop and point out tracks, which can be a bit annoying if you want to just keep pressing forward with them. You’ll want to go over and praise your dog in order to raise its drive meter once it stops. The higher the drive meter, the more they will search and be more useful as a result. You can then tell them to continue tracking, although you should keep tracking on your own as well. 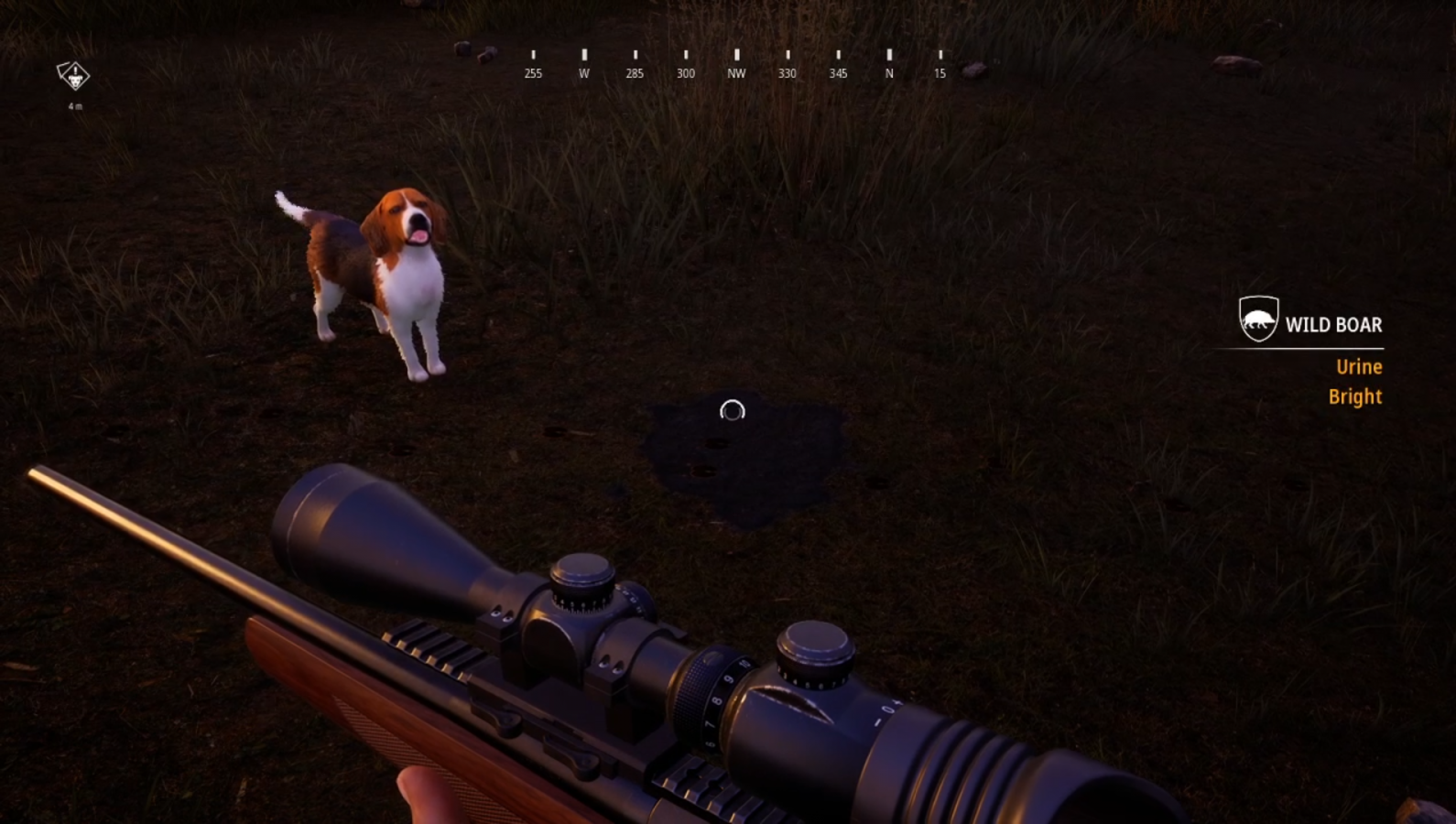 Why follow the tracks on your own instead of relying on the dog? Well, I’ll tell you in painful detail. I’ve had my dog get stuck in a loop of tracking the same two blood spots for five minutes during the tutorial, which led to me walking off to find the deer’s body on my own, with no help from my dog. During regular gameplay, my dog also got lost while following tracks multiple times, decided to follow completely different animal tracks, and even stopped during a hunt to just follow a butterfly. Yes, you heard me right. My dog stopped following the bear tracks to calmly follow a butterfly. At that point, I gave up on his help. If the dog wasn’t going to help me actually track animals, then why even bother with him? I did better following tracks on my own. I do want to mention that patience is key because if you move too fast too close to animals, then they’ll run away and you’ll likely never see them again. That can even happen without you seeing the animals and realizing that they’ve run away. Heck, that may even happen after shooting them once too. I followed a bear that I shot for about 30 minutes and it still never stopped or even came into my sight again. I gave up on that bear after realizing that it wasn’t worth my time. 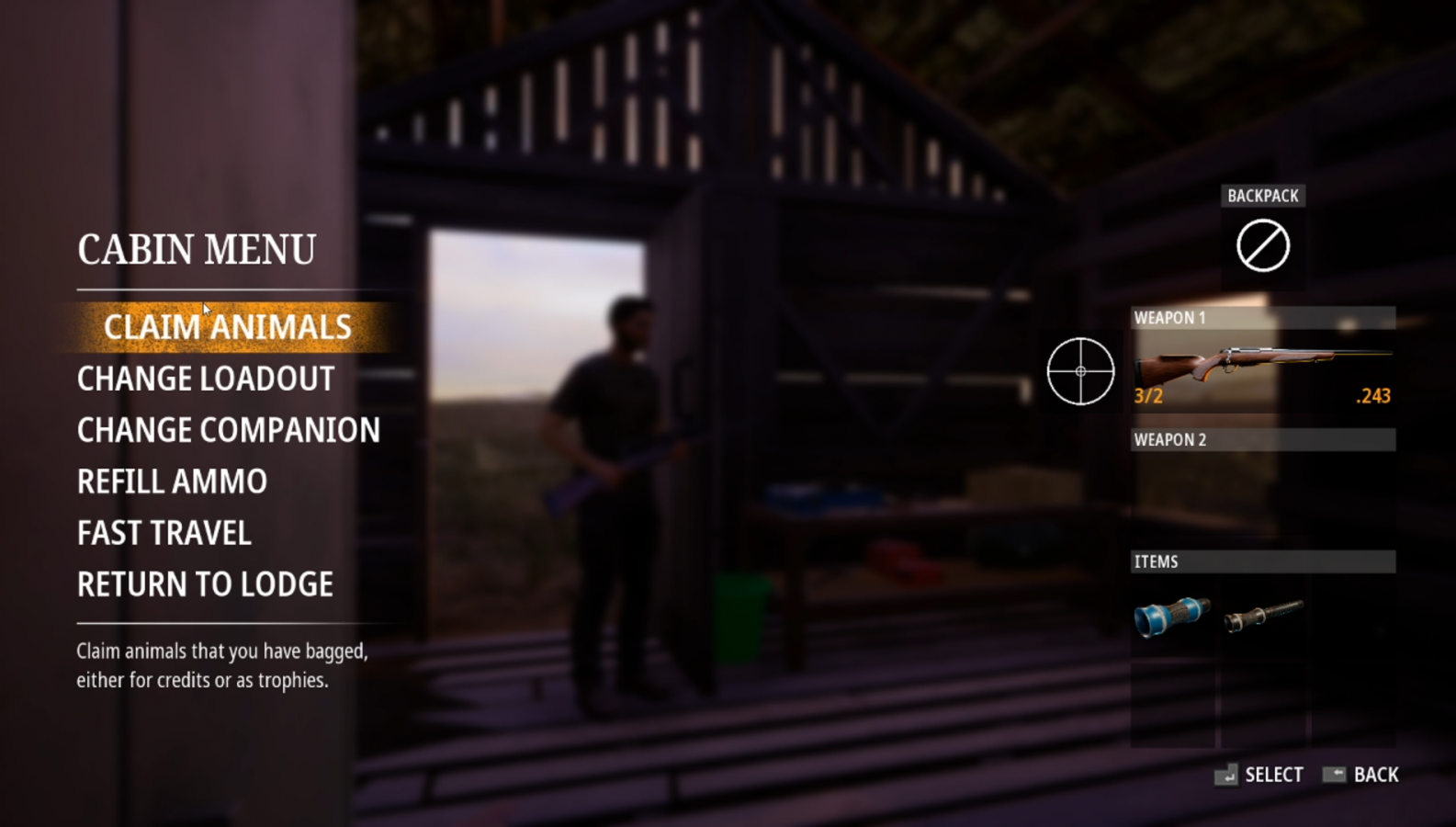 I’ve spent way too much time on this game playing it as a walking simulator than a hunting game. I get that hunting is supposed to be a waiting game and you need to be patient, but it’s boring as all get out to me. Some gamers may be into this style of play, but I unfortunately, am not. I don’t want to knock it for that, but if you’re looking for any sort of excitement, please steer clear. That, along with the dog feeling either completely useless or at best actually tracking an animal for a little bit before giving up, don’t make me want to keep going. Looking back, maybe the dog had the right idea when he got distracted by the butterfly? If the dog was more useful, then maybe hunting would be better, but not by a lot. I will admit that the visuals are really nice, whether it be the lush green trees, the clear blue sky, or even the animals themselves. It’s a nice world to walk through, but not so much for hunting. If you want to give hunting a shot, I’d wait to get more information on this game as the release gets closer. As of now, I wouldn’t recommend it, but hopefully at least some of my issues will get fixed by the time Hunting Simulator 2 releases next month.