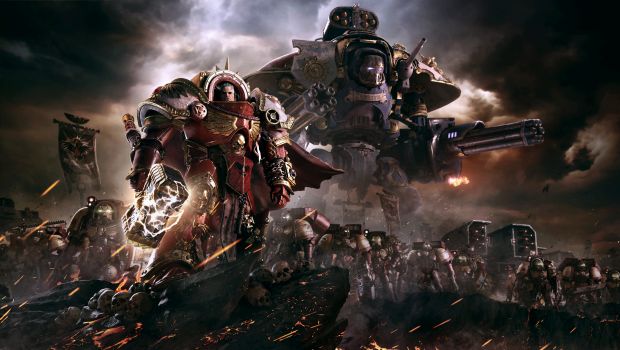 It’s been twelve years since the first Dawn of War rampaged onto PC, bringing the Warhammer 40k tabletop fantasy game to life in brutal fashion. I was a fan of both the original and the sequel, albeit for different reasons. They were two takes on the 40k universe, one centered on the massive conflicts and scale of warfare storied in the lore, while the other focused on hero units and individual squads, closer to the real-life game.

After what I saw at E3, I’m extremely intrigued by where Relic Entertainment is taking the third installment of the franchise. Frankly, the place it isn’t something unseen — it’s somewhere in the middle, splitting the difference between the two games without abandoning what made either so interesting. Base-building and massive armies meets skilled hero units, with repertoires of abilities and weaponry capable of annihilating wave after wave on their own.

More than anything, it sells the constant of Warhammer 40k: more blood, more carnage, all for the Emperor.

At first glance, Dawn of War 3 is recognizable. An omniscient top-down perspective lets you lord over the battle, issuing commands to units and moving across the field. As our demo (hands-off) continued, the returning Gabriel Angelos established a forward base against the Eldar. Calling in support, a number of unit production buildings and upgrade stations were produced, alongside a handful of Space Marines and the domineering Dreadnaught, piloted by newcomer Lady Solaria.

In discussing the game later with Phillipe Bowle, game director for Dawn of War 3, he explained to me the care taken to elevate the scale, while still keeping hero units meaningful.

“What we settled on was those big armies from Dawn of War 1, including base building [and] that larger battle, and then injecting the heroes from Dawn of War 2 into the middle of that,” said Bowle. “That created the kind of chocolate-and-peanut-butter of Dawn of War 3, taking those best elements together and making something new.”

Heroes are revamped a little more from Dawn of War 2, though. Instead of just having an Inquisitor or other similarly massive commander on the field, hero units can range from Solaria’s Dreadnaught to a specialized squad of Terminator Space Marines. With armies, Bowle and Relic look to allow players to define their playstyles, while also leaving some room for micro-managing “hardcore” players to utilize their troops in more specific circumstances.

Of course, when you talk Warhammer 40k, the book has already been somewhat written, over and over, in codices and handbooks that have been used for decades. The heroes, their weaponry, their possibilities all have been laid out already — so how do you innovate on that concept? For Relic, the answer is simple: you work within the limits, and find creativity within the spaces.

“The IP that we received from 40,000 and the heritage of Dawn of War has really been a strength for us, because it’s established some limits. If we’re going to do Space Marines, we’ve got to do them right,” said Bowle. “I actually find we thrive in that sort of creativity, where we have a sense of some of the end goals we’re looking for, but there’s a lot of creativity in how we get there.”

This time around, not only will the Space Marines be present for the campaign, but so will the other two races: the stoic Eldar, and the war-hordes of the Orks. Having the campaign jump between different viewpoints can be challenging, as it creates an issue of defining the protagonist. Who does the player root for when they’re playing every seat at the table? But Dawn of War 3 doesn’t concern itself with that. Like the universe it draws from, Dawn of War 3 is content to tell a story that has many shades of gray, many motivations, and no clear, defined “heroes.”

“There are no good guys in this dark future,” said Bowle. “The Space Marines do have a nobility about them, but they take no prisoners. I would not want to be a human being seeing a Space Marine, because there’s a good chance they’re going to wipe my planet out from orbit, or destroy my city while ‘saving’ it.”

From our brief glimpse at E3, we’ve seen that kind of destruction is already possible in the engine. Massive lasers rain down from orbiting ships, annihilating Eldar and Space Marine alike. Dreadnoughts unleash hell on foes, while melee units charge fearlessly into a hail of incoming fire, intent on razing their foes to the ground or to die trying. This is a dark universe, but with Relic at the helm, Dawn of War 3 looks to satisfy every need of fans new and old alike. This is the Dawn of War resurrection we’ve been looking forward to, and boy, does it look gruesome.

Look for more coverage on Dawn of War 3 in the months to come, right here on Gaming Trend.