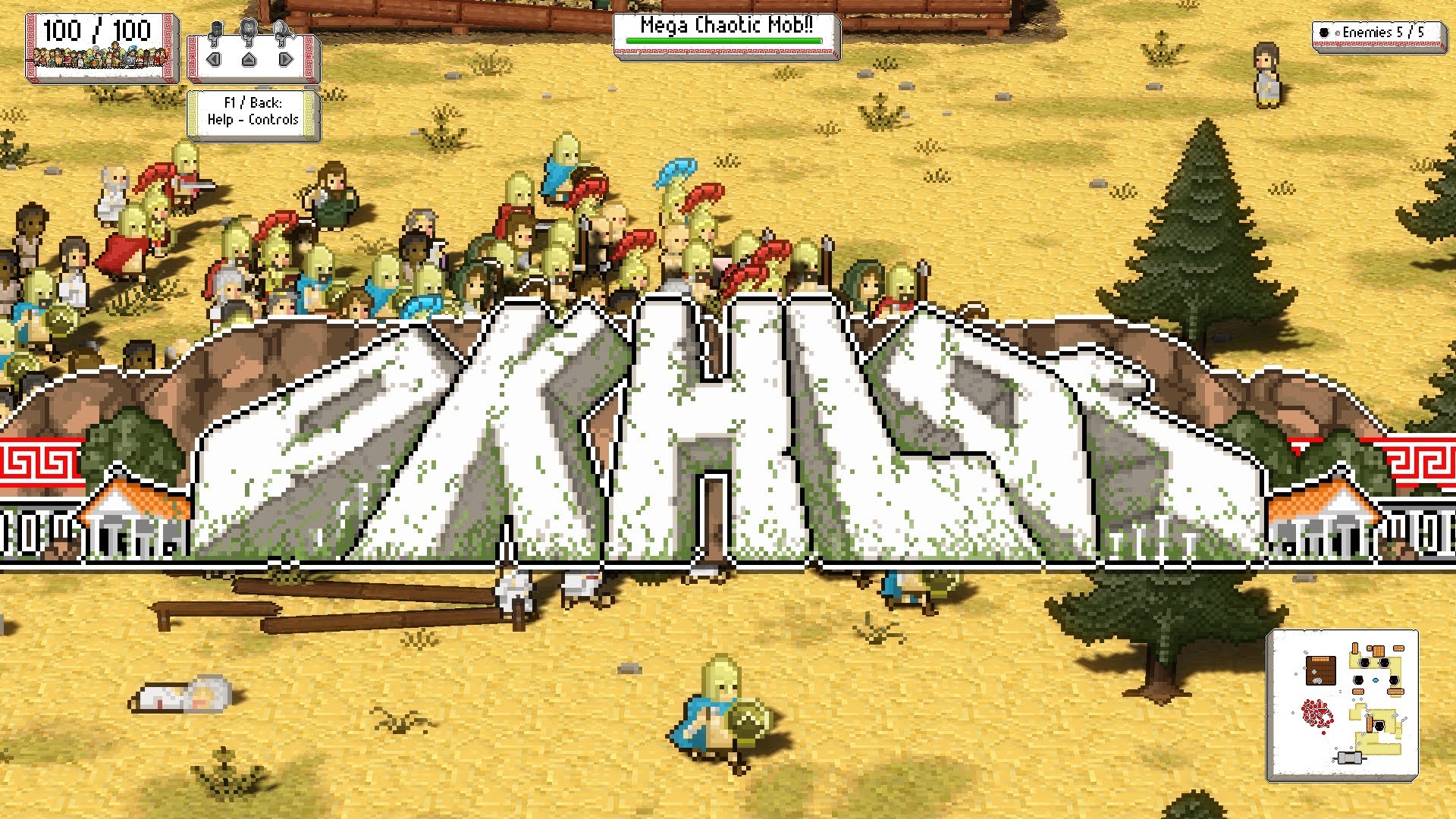 Okhlos reads like a tongue-in-cheek history lesson on Ancient Greece and plays like a surprisingly brutal roguelike that hinges on your ability to manage a horde of Greece’s more underrepresented and oppressed people. The fine folks over at Coffee Powered Machine have done their research on the societal quirks and intricacies of Ancient Greece. The narrator in Okhlos takes the form of Homer, of The Iliad and The Odyssey fame, and he’s written as a sort of sarcastic purveyor of gameplay tips and historical trivia. He even sports an eye scar and some curiously cloudy pupils which is a nice subtle touch regarding Homer’s oft debated blindness. The writing in Okhlos is fun and informative (I wish some of our history textbooks would adopt this tone) but the gameplay takes center stage and blends various genres together to create a chaotic, yet satisfying experience.

I won’t mince any words here, I’m kind of terrible at Okhlos. The game starts off deceptively simple but when you arrive at your first boss encounter (the bosses take the form of Greek gods and goddesses) you’ll get a taste of just how challenging the game can be. You can only control the philosopher class characters, which is another good nod to how Greek philosophy rattled the cultural foundations of its time and provided an alternative to the state dictated belief in the traditional gods/goddesses. But apart from your philosopher, you’re also tasked with controlling an increasingly large quantity of Greek citizens, ranging from guards and slaves to chickens and cows.

You control your philosopher with the keyboard and move your mob with a mouse. You issue your mob to attack by hammering on the left mouse button and issue a defense command by holding down the right mouse button which lets you effectively tank attacks. The effect of moving your primary character and the mob simultaneously had my brain doing context switching gymnastics. Perhaps I’m overstating that a bit, but Okhlos reminded me of trying to learn jazz piano and how difficult it can be to sync up a waking bass line with the left hand and improvising with the right. But after a little practice, I found myself having a blast with Okhlos multitasking. Figuring out the most effective way to tackle each level and how to properly maneuver my squad became almost second nature after about an hour with the game.

The term “roguelike” has been getting tossed around a lot lately. Okhlos embraces this approach to game design and resets you at the very first level regardless of where you meet your demise. This can make your ascent through the levels nerve fraying. This complete game reset made me play cautiously at first, but I quickly discovered that playing Okhlos fast and franticly (much like I would in Hotline Miami) felt better and made more sense within the context of the game. Mobs don’t generally plod along slowly and patiently wait while their pitchforks dull, they move violently and erratically. Okhlos embraces its chaotic pedigree and encourages you to play quick and loose.

I’ve always been of the opinion that music is one of the most important components in creating a good film, video game, theatrical production, etc. Okhlos has an upbeat mix of catchy electronica coupled with the humorous inclusion of slow jazz that drips over the in-game menus and mob trading shops. Did I mention that there are shops? There are five or six short zones before each boss fight and in between each zone is a merchant who will let you trade in members of your mob for stronger allies who will apply passive buffs, provide heals, and any number of helpful benefits to help you make quick work of your enemies. It’s a nice little feature that makes each run through a little different as the allies the vendor provides are completely random.

My only concern with the current build is that once members from your mob start to fall in a boss encounter, there are very few opportunities to replace them. I’m all for a good challenge, but when your ranks start to thin and you have to watch despairingly as the game over screen slowly creeps up, it can feel a tad unfair. But between Okhlos’ difficult, yet addictive gameplay, catchy music, and quirky writing I’m intrigued to see what the final product has to offer. Okhlos comes out on August 18th for PC, Mac, and Linux, giving you plenty of time to brush up on your Ancient Greek history during the wait.