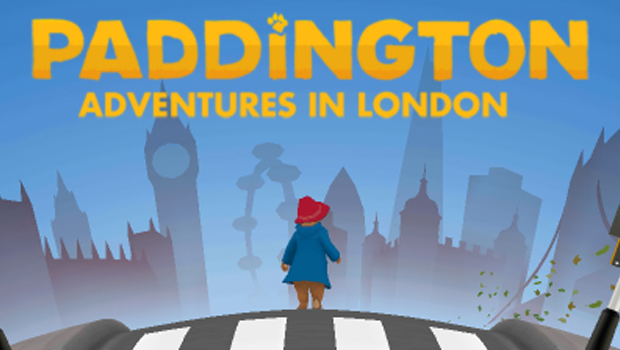 Movie tie-in titles, especially ones for children’s movies, are almost universally laughably unappealing.  They’re usually either reskins of other games or half-assed attempts at simply retelling a movie’s story.  Paddington, a point-and-click title for 3DS, is, almost astoundingly, not one of those titles.  While it doesn’t stray very far from the beaten path, it offers an enjoyable game for young Paddington fans who want to take the reins exploring London through the eyes of the lovable bear.

Paddington is a sidescrolling point and click that allows players to tap their way through London, hunting for marmalade sandwiches and helping the people of London as he fulfills his own quest of finding the renowned explorer Montgomery Hyde.

“Like in the movie, people will come and talk to you as you do good deeds,” Ryan Avery, product marketing manager at Deep Silver, told me as I cleaned up trash blocking my path.

Interspersed through the London streets are characters from the movie, who will assign Paddington tasks. Ultimately, the bear wants to meet his hero and become a true English gentleman, but mini-games and simple hidden object puzzles fill the space in between.

One mini-game had me balancing while carrying numerous suitcases down the sidewalk, while in another I was tapping pigeons away while Paddington was trying to eat his marmalade sandwich.  Nods to the movie don’t get in the way of gameplay while also ensuring that the 3DS game feels grounded in the Paddington universe.

“One thing about Paddington is that he’s everyone’s favorite bear… but we’re aiming for age five to ten,” Avery told me. While ten may be a bit old for Paddington: Adventures in London, I think four to eight year olds can have a great time exploring downtown London as Paddington.

Paddington is full of charm and “aww” moments along with some surprisingly fun mini-games to break up the point-and-click gameplay.  You can have the pleasure of becoming a true English gentleman playing Paddington: Adventures in London for 3DS on August 11, 2015.