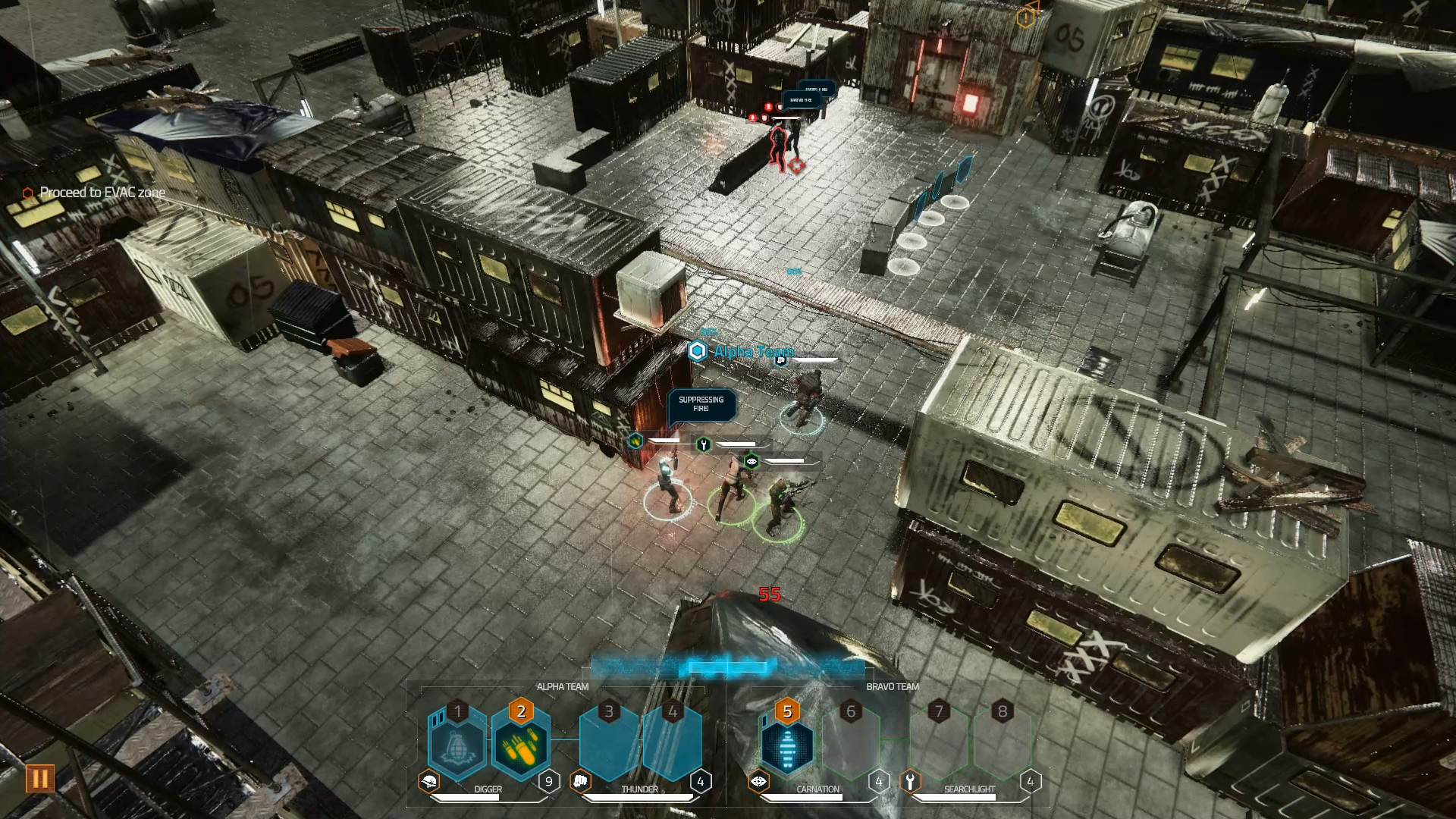 M.E.R.C. is a new real-time tactical shooter from TinyMob Games that released on Steam’s Early Access program earlier this month. Set in a not-so-distant dystopian future, you command a team of mercenaries who have been hired to uncover and eliminate the mysterious forces that are destabilizing Earth’s last remaining city, Neotopia. Rife with corruption and ruled by rival corporations, you must complete your mission in order to avoid all-out corporate warfare.

The influences and inspiration for M.E.R.C. are clear. Its skin and bones, the foundations of its gameplay and aesthetics, appear to be an amalgamation of the XCOM series, Syndicate, and Satellite Reign. The game’s real-time strategy, squad-based combat, cover system, and its dark portrayal of the future all bear resemblance to these tactical heavyweights. To be clear, I’m a big fan of all the aforementioned games, but unfortunately, M.E.R.C. just isn’t on that level yet (and yes, I understand this is an Early Access title).

M.E.R.C.’s meta-game is similar to XCOM 2’s campaign. You’ve got to complete story missions and side missions (which expire as time progresses) and the order in which you take them on is up to you, but the city’s impending doom, or “threat level,” (think XCOM 2’s Avatar Project) will increase if you skip or fail them. The side missions feel and look so similar that they become repetitive and boring—kill this guy, capture this guy, destroy this thing, or retrieve this thing—unfortunately. The meta-game concept is sound, and has worked in other games like XCOM 2, but it falls short of feeling significant without a more gripping story and better side missions.

I encountered one of M.E.R.C.’s biggest shortcomings during the very first mission: the camera is simply awful. Unlike nearly every strategy game in existence, you cannot separate the camera from your units; it follows your squad everywhere. You can zoom in and out slightly, but this is useless since you can only pan the view in a small circle around the unit currently selected. This means that you can’t see much, if anything, in front of your four-person team, you can’t plan a route, and you can’t effectively plan an attack or a defensive position—all of which represent the most basic and fundamental aspects of strategy.

The camera problem could be mitigated slightly with the inclusion of a mini-map, but that’s strangely missing as well. Without a mini-map or the ability to move the camera around, simply navigating a level is annoying at best, and a pain in the ass at worst. Enemies and objectives, unless currently on screen, are only denoted with arrows or icons at the edge of your view, but again, without a map, there’s no way to tell exactly where they are or how to get to them.

What little in-game strategy that’s left at this point is further ruined by a slew of other issues: enemies routinely fire through obstacles, enemies can spot you even when they are facing away from you, and your team members only fire once ordered, or when fired upon, never before.

Controlling your units, a fundamental part of any strategy game, needs some serious reworking. Your squad can be given commands as a whole, or separated into two-person teams, alpha and bravo. However, you can’t select either of them directly, and instead you must swap back and forth between them using the TAB key, something that is beyond frustrating in the midst of a firefight.

To make matters worse, in a world where right-clicking has become a nearly universal operation for ordering actions like moving and firing, and left-clicking is mainly used for selecting things, M.E.R.C. defies these deeply ingrained habits from years of consistency and instead has an infuriating mix of both. You right-click to move into cover, but left-click to move and open a crate or door. You right-click to move into the open, but left-click to fire at a target. You hold left or right-click down and move the mouse to pan the camera in a circle around your selected unit(s). During my first few hours I accidentally rushed my squad directly into the line of fire many times due to these easily avoided control scheme issues.

When my first soldier was killed, I’d expected and hoped it would be a permanent death—it was not. Instead, I could heal that soldier’s wounds over the course of a few in-game days. This just felt cheap and silly in a meta-game like that of XCOM. Death is, apparently, only an inconvenience in M.E.R.C.

To pour salt in this game’s wounds, the recovery system needs balancing.

Soldiers get injured very easily and healing them takes many days, and when you’re just starting a campaign with a grand total a four soldiers, losing one to a long recovery period is not an option. Hiring new soldiers to fill this vacancy is pricey and adds to your weekly expenses, and all too frequently there simply aren’t any new mercs available for hire anyway, so you’re stuck waiting it out. At one point, nearly all of my soldiers had Traumatic Brain Injury, which gave them a massive -50% to accuracy penalty and required a whopping 20 days to heal. It seems to me that permanent death, with cheaper, more available mercs and a more forgiving injury system would help smooth out this mess.

Somehow, amidst this title’s laundry list of flaws, there exists a foundation for what could actually become a decent game.

The soldier customization options and abilities are solid and I think the tactics would grow sufficiently deeper and more challenging if TinyMob is able to make some significant fixes and add more varied content. Throw in more than the two highly repetitive songs already on the soundtrack and M.E.R.C. could shape up nicely.

Hopefully TinyMob takes advantage of the Early Access period to engage with the community, to listen to it, and to make fixes, issue improvements, and add content so that M.E.R.C. can realize its full potential. Stay tuned.