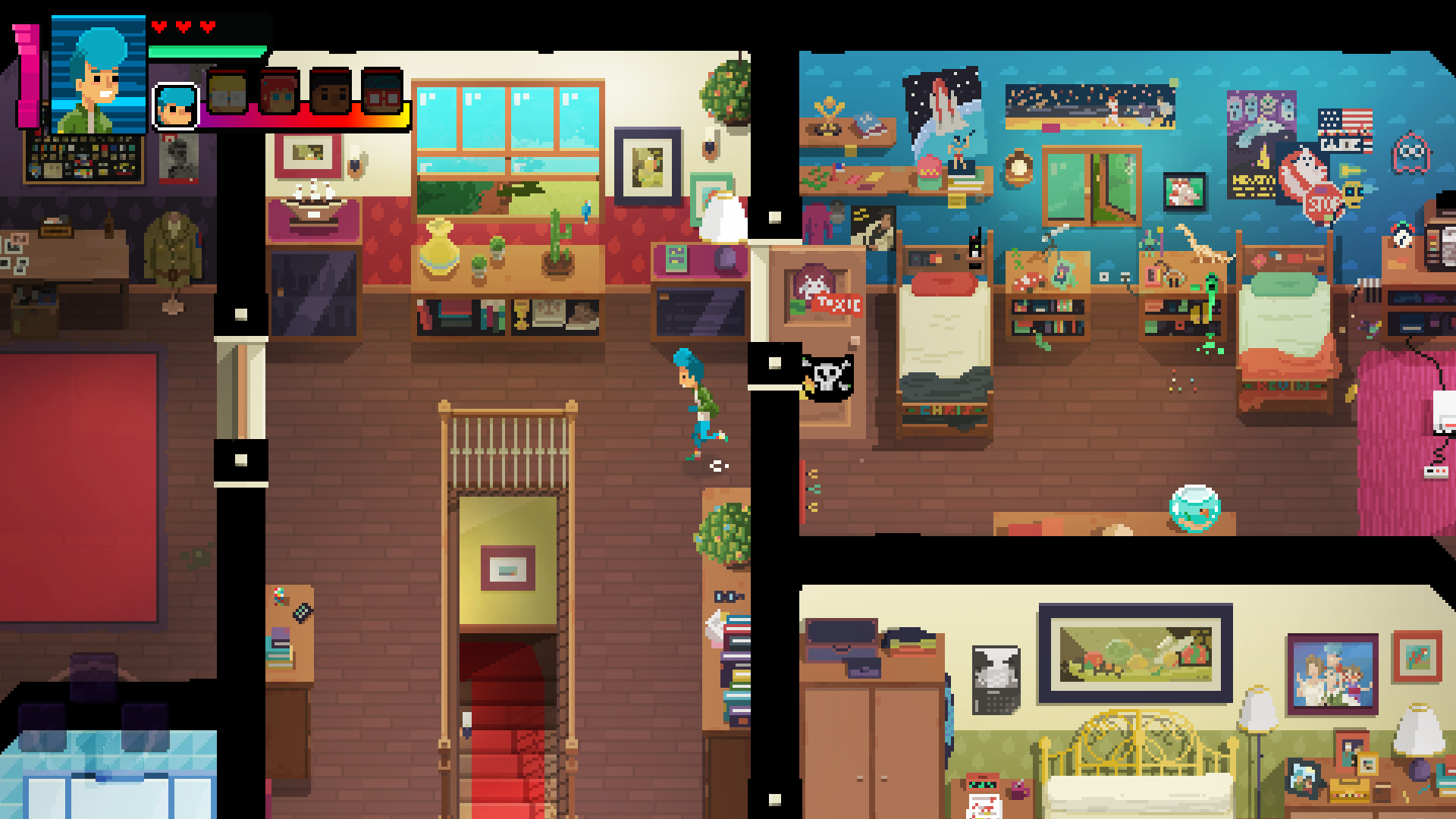 As a kid, summers seemed endless and overflowing with possibility. Movies such as The Goonies filled my adolescent head with dreams of grand, fantastic adventures under a cloudless summer sky. Indie developer Fourattic has brilliantly captured the sensation that the world is big and full of wonder in its retro-styled, pixel-graphic, action-adventure game, Crossing Souls. Described as ET and The Goonies meets Stranger Things, it tells the story of five friends who begin a summer much like any other, until an encounter with a strange artifact which allows them to travel between two different realms changes everything.

With 80’s nostalgia making a comeback in a big way, it’s unsurprising to find more retro-themed games making an appearance at PlayStation Experience. Crossing Souls has taken the theme to a hilarious extreme, literally bursting at the seams with movie and tv show references, celebrity look-alikes, and even a few outdated science jokes. The game overflows with humor, from the gang leader Quincy Queen, who looks suspiciously like Prince, and informs you that you are not to speak to Quincy Queen unless Quincy Queen speaks to you first, to the mobile home owner with the mullet who believes that he’s a superhero sent to save the world from drunkenness by drinking all the whiskey, I found something quirky and hilarious lurking in literally every corner of the demo.

The gameplay is what you’d expect of an action RPG title; you roam the city streets as one of the five playable characters, solving the occasional puzzle, and fighting bad guys by mashing the X button. Each character has their own weapon and fighting style, with Chris swinging away with his baseball bat, while Matt, who disproportionately reminds me of Egon from the Ghostbusters cartoon, blasts enemies from a distance with is ray gun. Switching between characters is as easy as pushing a shoulder button and, just to add to the novelty of this delightful game, characters will react differently depending on which of the five heroes you’re playing as. Nerdy Matt might be blown off, but Big Joe, the bruiser of the team, could just intimidate someone into providing some useful information.

Players can expect to complete the story of Crossing Souls in 8 to 12 hours, and while the story is linear, the world is pretty open, and intended to be explored. Hunting for hidden pop culture references, completing every puzzle, and hunting down each character-specific bit of dialogue should add several additional hours to that total. Crossing Souls will be PlayStation 4, PlayStation Vita, and Steam on February 13th. Learn more by checking out the Crossing Souls website and the Steam store.