Electronic Dance Music has taken over Vinyl City. The company NSR and their top artists now have control over the city’s power generation and distribution and they’re hoarding all for themselves. After being rejected from a live TV audition, Mayday and Zuke of the rock band Bunk Bed Junction set off to confront NSR and bring rock back to Vinyl City. Oh, and I guess set in motion some much needed systemic change along the way.

No Straight Roads is a Rhythm Action game. You control both Mayday and Zuke, in either single player or local co-op, and fight, platform, and rock your way to victory. While the two control similarly at their core, they both have key differences to make them unique and suited to certain situations. Mayday hits much harder with her guitar while Zuke is much quicker but doesn’t do as much damage with his drumsticks. The typical character action combos are split up between the two as well, as Zuke can cancel out of most of his attacks to dodge or perform a finisher with the top face button while Mayday can perform a big finisher after any hit in her combo by holding the attack button. Both characters can also hold the top face button to activate nearby objects to help out in some way, Mayday can transform objects into turrets or missiles while Zuke can turn said objects into treadmills to move faster or invincible safe zones. In single player, you can swap between them with the left bumper and whoever you’re not controlling will slowly regain a portion of their health, which is crucial for surviving some of the more difficult boss battles. 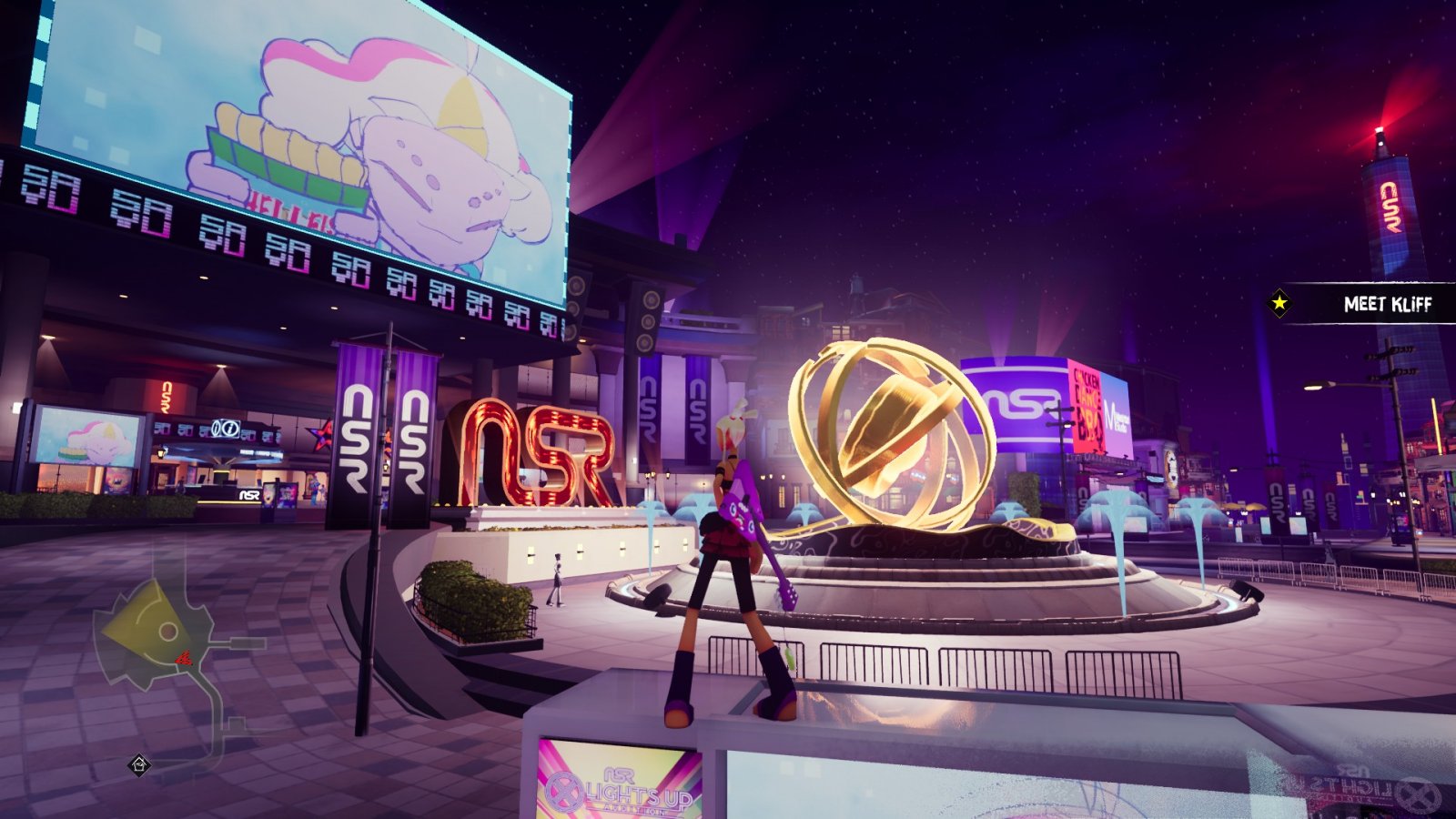 In this preview build, we got to take on two of the game’s bosses: DJ Subatomic Supernova and the vocaloid mermaid Sayu. With the game’s focus on music, all enemies’ attacks are in time with the soundtrack: for example, some hazards in Sayu’s stage will only move along with her vocals. While it’s still important to look at the screen and see what’s happening, it’s much more important to listen and move along with the music as attacks can go off much quicker than you can visually react to them. In a neat little touch, the music can shift between an EDM version and a Rock version depending on how well you’re doing, the guitar or drums you can play when holding the top face button seamlessly integrate into the music as well. As you would hope for a game with rhythm elements, every single tune is excellent including boss tracks and just the jams when just exploring Vinyl City. Sayu’s boss theme in particular is absolute ear candy with beautiful vocals that slowly become corrupted as you do damage.

If you’ve read any of my work here on Gaming Trend, you know that I love video game music, character action games, and platformers. In the understatement of the year, you could say I was very excited for No Straight Roads and jumped at the chance to try out this demo before release. I went in with very high expectations, but somehow the game surpassed them all. It feels so good to just feel the music and destroy enemies without a scratch, which is much easier said than done considering how floaty the dodge roll can feel. However, on my PC at least there were many performance issues that made the game tough to play at times. Instead of dropping frames or stuttering, the game will actually slow down if your hardware is having trouble. The music unfortunately does not also slow down so you might be blindsided by some attacks in particularly intensive areas. Like in the hardest version of DJ Subatomic’s fight available in the demo, instead of launching a few planets around the arena he’ll launch all of them at once so quickly you can’t see them and your only option is to parry the ones with purple markings below since you’ll still get hit when dodging for some reason. As you can see in the video above, I eventually turned down the graphics to as low as I could make them just so the timing wouldn’t get messed up by performance issues. In other areas, the frame rate would actually increase when turning the graphics settings UP strangely. Aside from these issues, there are also some visual inconsistencies in attacks you can parry. As I said before, they’re supposed to be colored purple but, as the Sayu video shows, I parried some of her red and white attacks as well. While the developers at Sold Out have plenty of time to fix these issues before the game releases on August 25th, I still adored the short time I got to spend with the game. The combat and platforming are extremely fun, the story and voice acting are charming and cheesy, and the music is absolutely astounding. Needless to say, I need this on Vinyl stat.