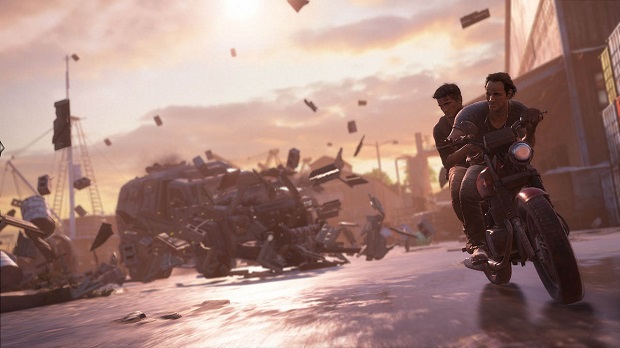 In a time where games often fail to strike a balance between being cinematic and maintaining player agency, Naughty Dog showed me in an extended version of Uncharted 4: A Thief’s End’s E3 demo that it understands how to craft exhilarating set pieces while still making a point to involve the player in ways that other games don’t.

While the first half of the demo focused on the car chase that everyone saw at Sony’s presentation on Monday, what followed immediately after showed Naughty Dog’s dedication to never taking the control out of the player’s hands if it doesn’t have to, as well as giving the action sequences of Uncharted 4 a level of flair that even the previous games never quite reached.

This extended demo began just as the one shown during Sony’s conference did, with Nathan Drake and Victor “Sully” Sullivan entering a city looking for Nate’s long-lost brother Sam. Having already gotten into it with the enigmatic antagonistic group gunning for the treasure they’re after, Nate and Sully end up in a firefight with a group of thugs, with an emphasis on verticality and aerial melee takedowns that make the combat more dynamic. Naughty Dog continues to flex its technical prowess by filling the entirety of the environments with painstaking detail, and that detail seen in your surroundings extends to melee combat, as Nate can break through plenty of objects and structures in the environment during a fist fight.

This was followed by the Uncharted series first driving sequence (unless you want to count the Jet Ski segments in the first game), and there appear to be multiple paths to take as you plow your way through the lower areas of the city.

All of this eventually leads to the moment the original demo ended, which had Nate grappling onto a truck that was in pursuit of the motorcycle-riding Sam, only for the screen to cut to black just as he was about to collide with a wooden structure.

But once Nate breaks through the structure and is dragged through water and mud, Uncharted 4 kicks it into a whole other gear, and you’re left to hold on for the ride. While Nate is being dragged through the mud by a truck, you’ll still have to make him climb upward and shoot down enemies that are on other trucks, all in real-time. Never once does Uncharted 4 sacrifice action-packed cinematic set pieces for player control, or vice versa. Naughty Dog has found a way to not make the player feel like they’re in the eye of the storm, merely covering and shooting their way through the spectacle as previous Uncharted games have done in the past.

The car chase goes on until Nate eventually catches up to Sam’s motorcycle, jumps on the back, and has to lay down cover fire as the two attempt to escape their pursuers.

Attempting to describe the velocity of this entire sequence does it no favors, and hopefully Naughty Dog is planning to release it in the coming days, as there has been nothing that has sold me more on what it means to bring Uncharted into the next generation than this sequence that the public has yet to see.

Uncharted 4 is a game that makes no compromises in the sequences it wants you to experience and keeping you in control. There’s a common belief that being cinematic and keeping the player involved are two mutually exclusive concepts in games, but in less than 20 minutes, Uncharted 4 absolutely flipped that perception on its head.

Studios looking to create cinematic experiences that are also rich in gameplay need to look at Uncharted 4 when it comes out next year, because it looks like Naughty Dog already has an incredible head start.