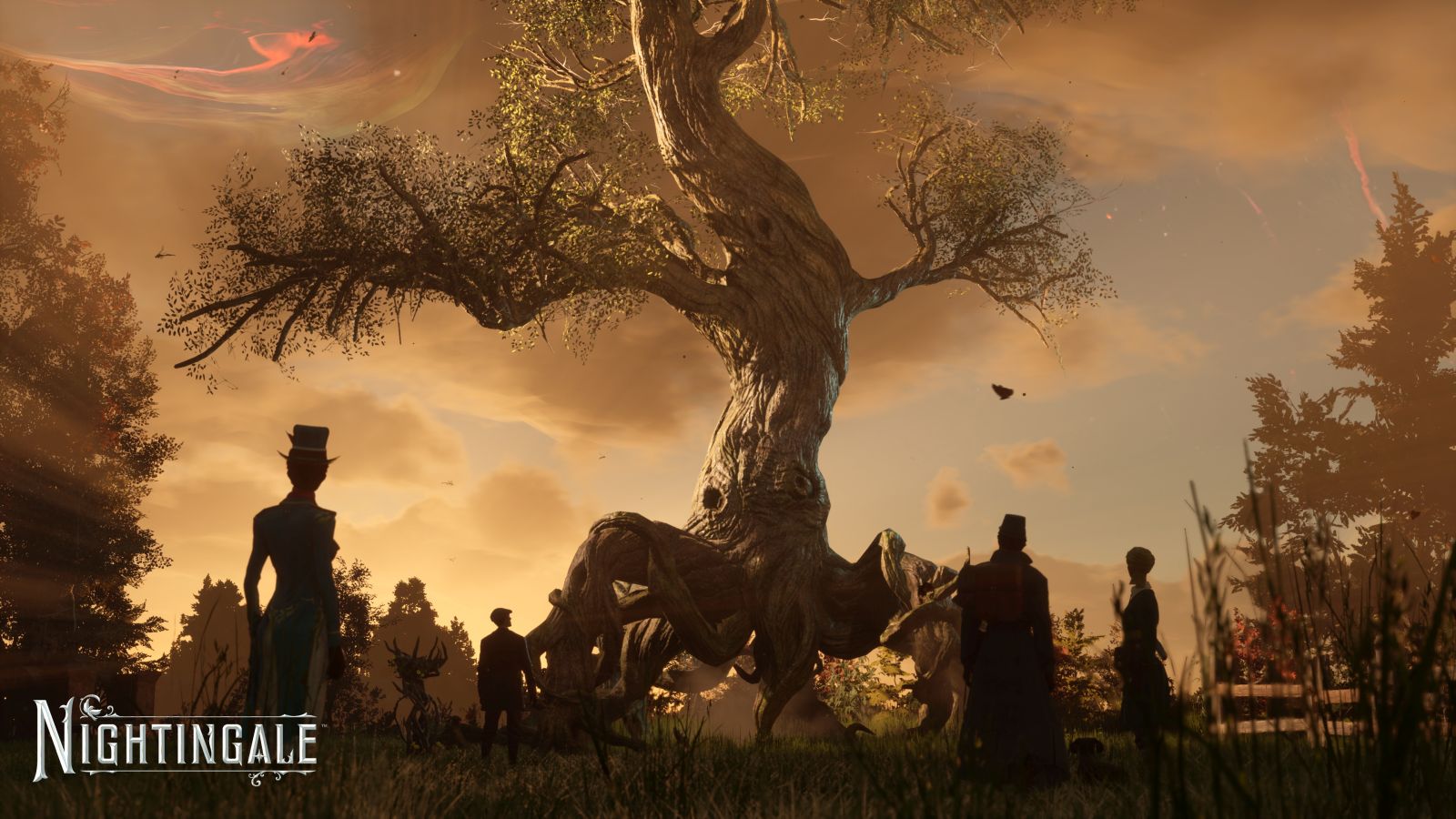 When I saw the reveal trailer for Nightingale, with its fae neo-Victorian gaslamp aesthetics and a horror twist, it had my immediate attention. When I realized what they were showing was a survival crafting game where portals would allow them to effectively introduce world after world after world, I knew this was going to be the game that consumed my life on release. Just ahead of the release of the trailer you just saw at The Game Awards, I got to sit down with Aaron Flynn, CEO, Neil Thompson, Art Director, Leah Summers, Director of Production, and Dave Holmes, Gameplay Designer, all of whom work at Inflection Games Studio to find out more about Nightingale just ahead of its release into Early Access. It didn’t help me lower my expectations in the slightest, and I suspect I’m not alone. 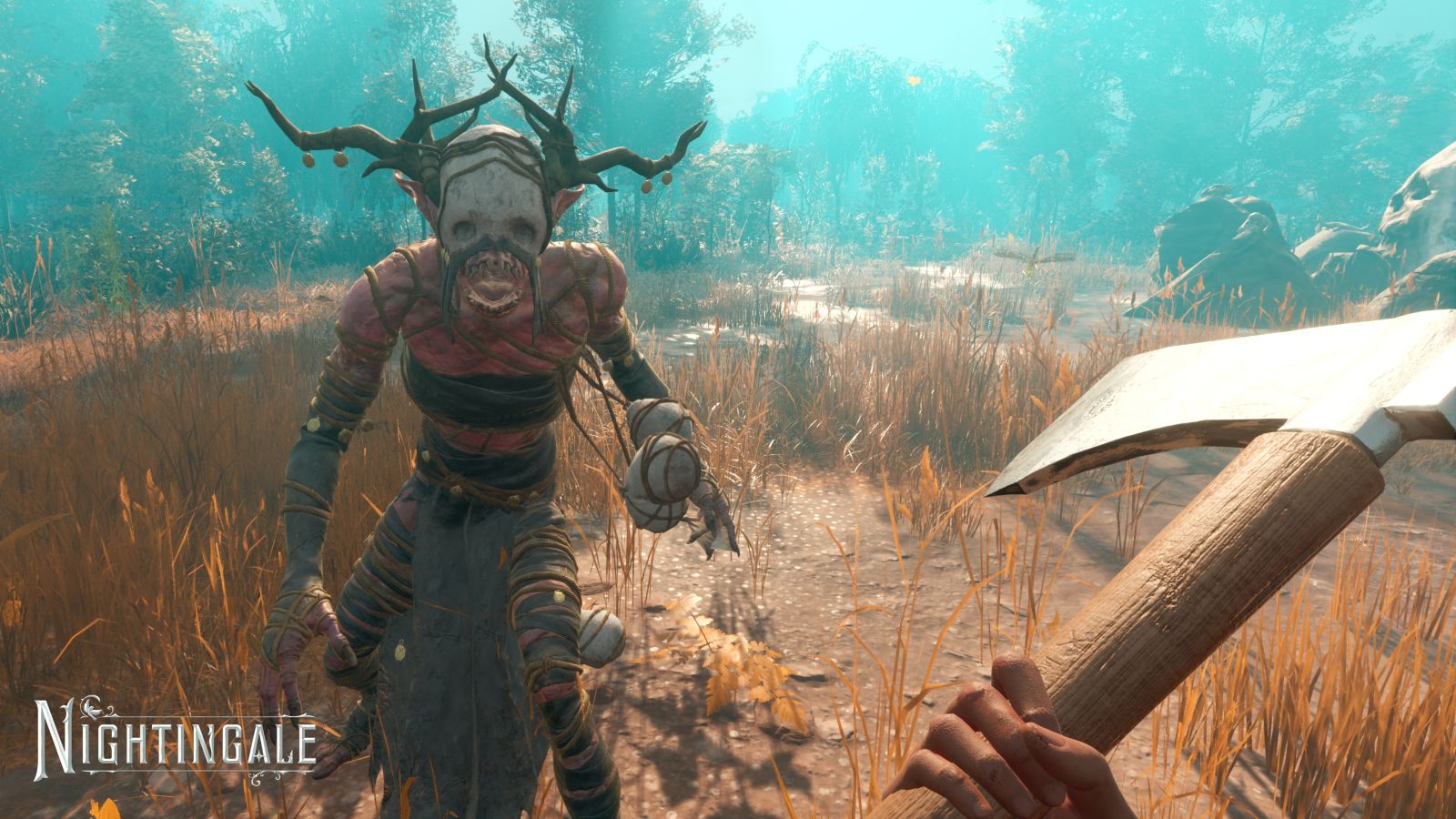 Before we get into Nightingale, it’s worth noting where this team comes from. Based in Edmonton, Alberta Canada, it should come as no surprise that the team is full of ex-Bioware alumni, along with a great many other AAA luminaries. As such, it’s already clear that the team is focused on a narrative-first approach to gameplay. They want each world to tell a story, but also provide the player (or players) as much agency as possible within that story. The primary mechanic used to provide that player agency is survival crafting. 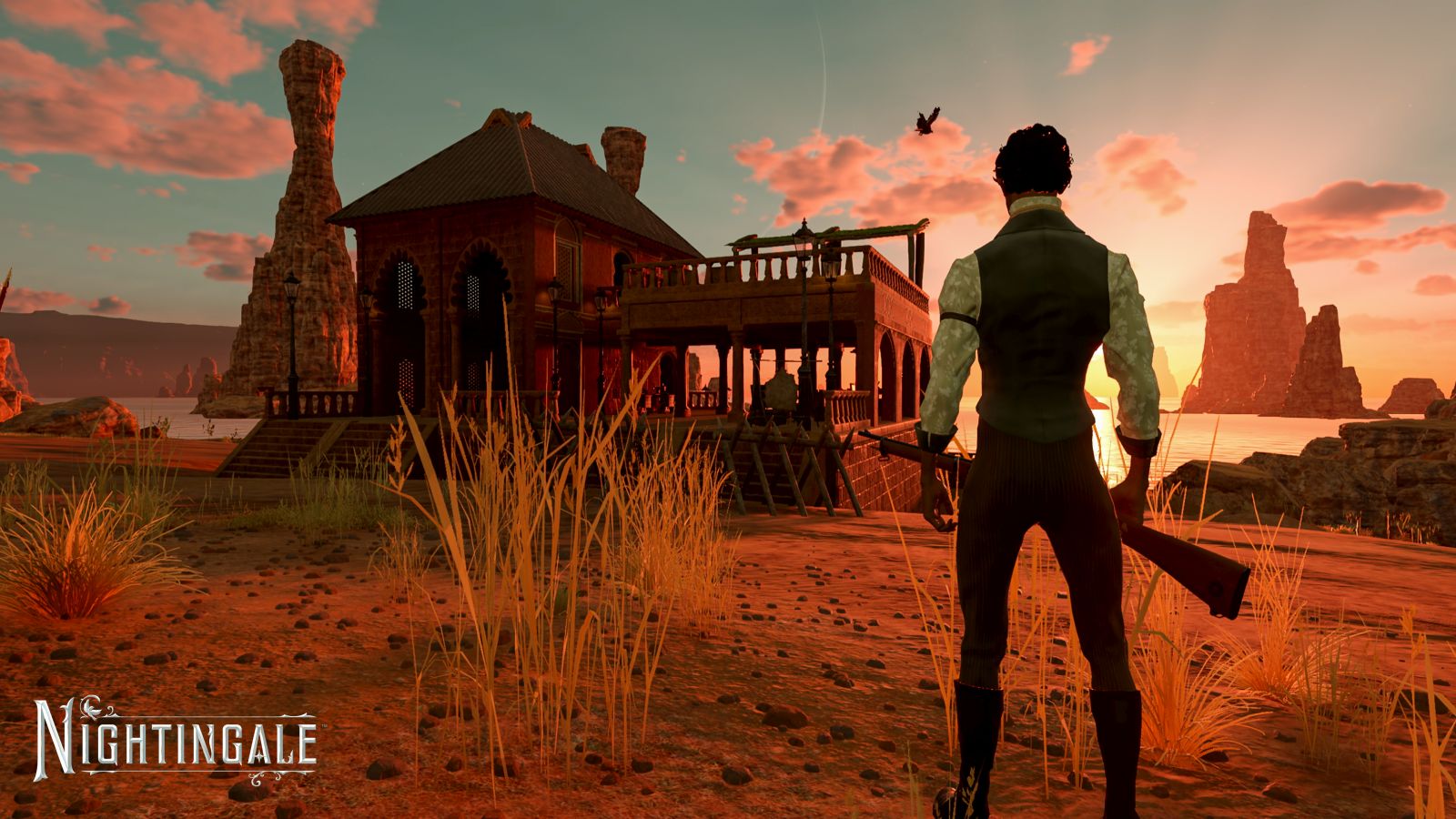 Unlike other survival crafting worlds, you aren’t alone. There are NPCs in the world of Nightingale that will provide quests and offer up special resources, schematics, and other rewards. Cooperation between players is still the best way to craft, farm, build, and survive, but that decision is entirely up to you.

The story of Nightingale is one set in an alternate version of Victorian history. For thousands of years humans have coexisted with magical beings called the Fae. With the power of Fae magick, humans have achieved the same progress we’d have otherwise accomplished on our own, but it has always been a somewhat uneasy alignment. A city called Nightingale grew into the center of magical studies, and is the birthplace of Realmwalkers – adventurers who can use and control Fae portals that can take them to, you guessed it, other realms. In the year 1889, a cataclysmic event occurred. The Pale, a mysterious and deadly miasma, has overtaken the Earth, collapsing the Fae portals in the process. Millions of people who were mid-travel found themselves stranded with no portal network. You are one such remnant human. Can you survive, become a Realmwalker, and find your way back home to Nightingale? 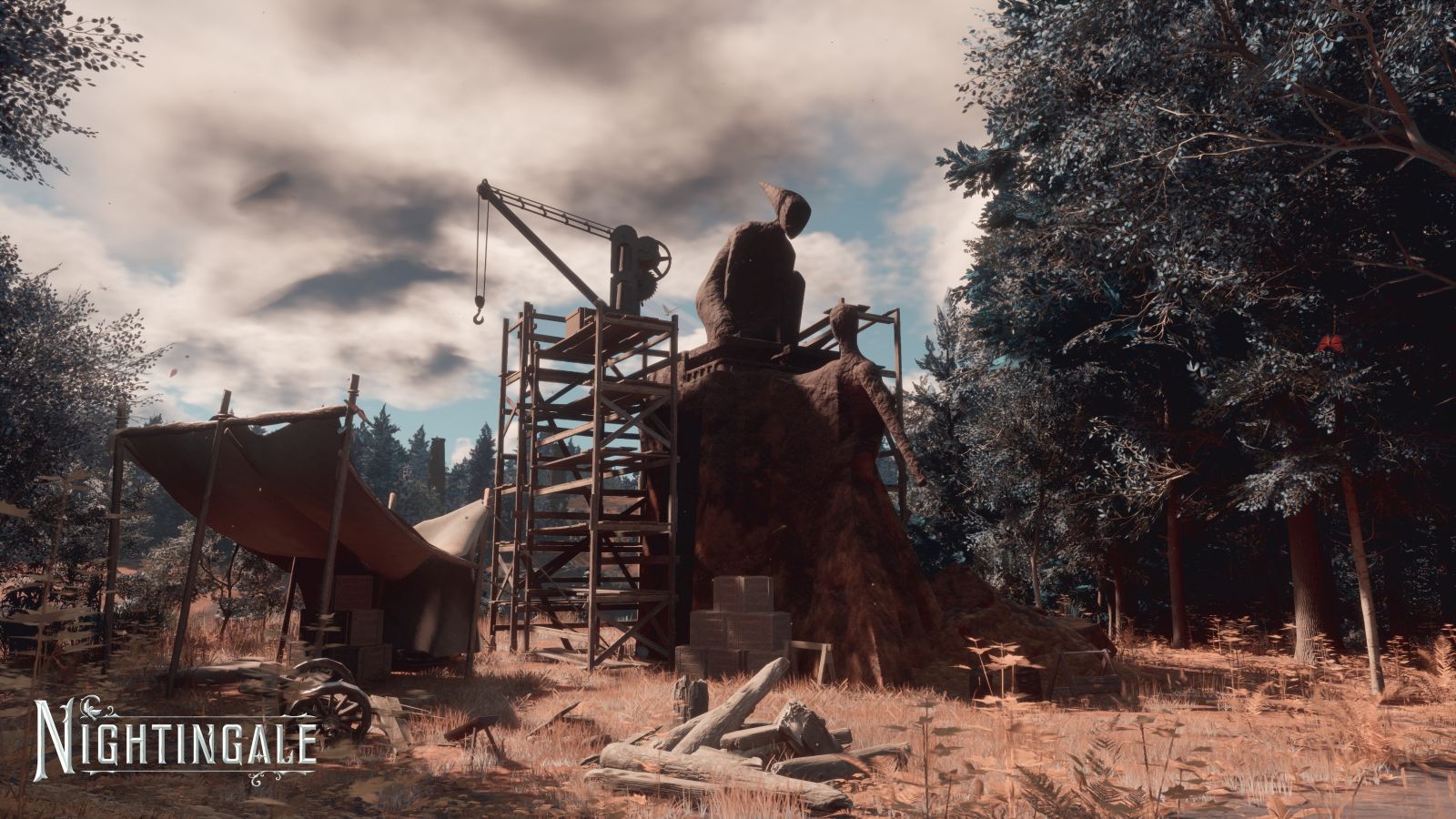 The team wanted to take a different approach to the survival genre. In games like The Forest, Valheim, or other similar survival games you are dropped off in the middle of nowhere with the rags on your back. In Nightingale you are dressed to be outside. Draped indecent Victorian fashion, you can at least look the part before you start. As the game heads into Early Access, you’ll already be able to dress in various costumes (much if not all of which are gender neutral – poofy sleeves and waistcoats for everyone!), and equip yourself with better gear to grow your character. The team really wants people to be able to express themselves, so I’ve got my fingers crossed for a full transmogrification system to let me do exactly that.

If you watched the reveal trailer for Nightingale you might have seen a historic figure and not even known it. The team wants to blend real-world historical characters into their narrative, and the woman in the trailer is an alternative version of none other than Ada Lovelace, real-world famed mathematician who performed work on what would become the first computer. While she was taken early by “consumption” in the real world, here she’s alive and well and has become the head of Calcularia – the scientist faction of Nightingale. Similarly, Allan Quartermain, the subject of the 1950s book King Solomon’s Mines, is the head of the Explorer’s Guild. The team is also bringing to life their own blends of some of these characters. Lady Macintosh heads up the NCTC, a company that performs trading between and within the realms. Henry Hyde is a mashup of both Jeckle and Hyde. Other fiction and non-fiction luminaries are sure to join the list, so it’ll be exciting to see these literary giants come to life. 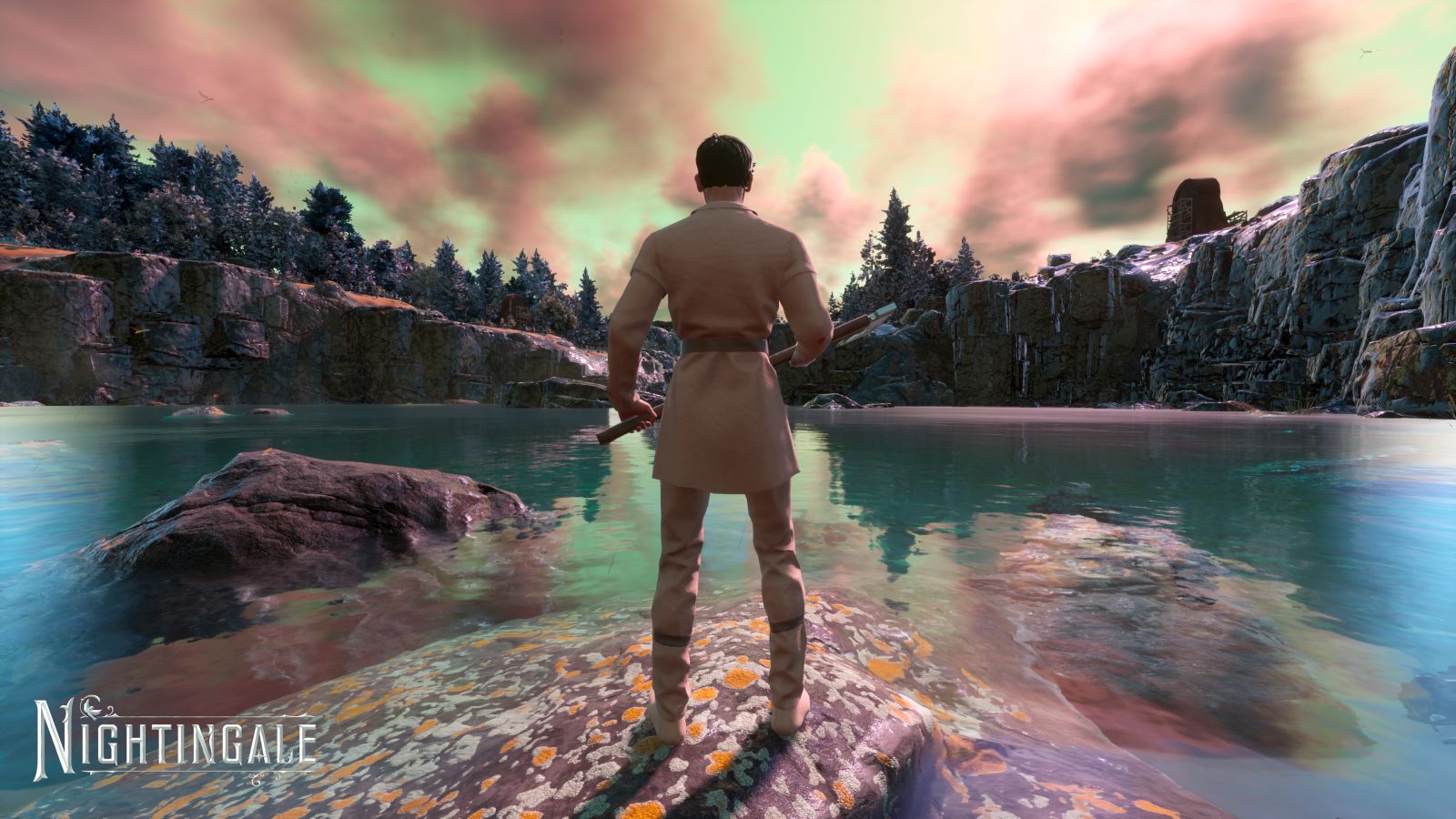 In our conversation, the team also talked a bit about how the Fae, the magical humanoid creatures in the game, are organized. At launch there will be two factions called “Courts” – the Summer Court and the Winter Court. It’d be easy to see them as some malevolent force, but that’d be reductive. Instead, think of them as powerful entities that are simply above your petty human needs and desires. The analogy was Superman and Commander Zod fighting it out high above the city – you are the citizens dodging the rubble as titans far bigger than you unleash havoc above. It’s not that the Fae aren’t interested in you – it’s that you don’t matter.

A giant world is nothing without something to populate it. As you establish yourself in the world you’ll face plenty of dangers, but even the most mundane of creatures can pose a threat. Wolves in packs are just as deadly as any giant. Beyond native fauna and the occasional mythical monster, you’ll also run into a faction called the Bound. While you might negotiate an uneasy peace or even earn rewards from a Giant, the Bound will have none of it. 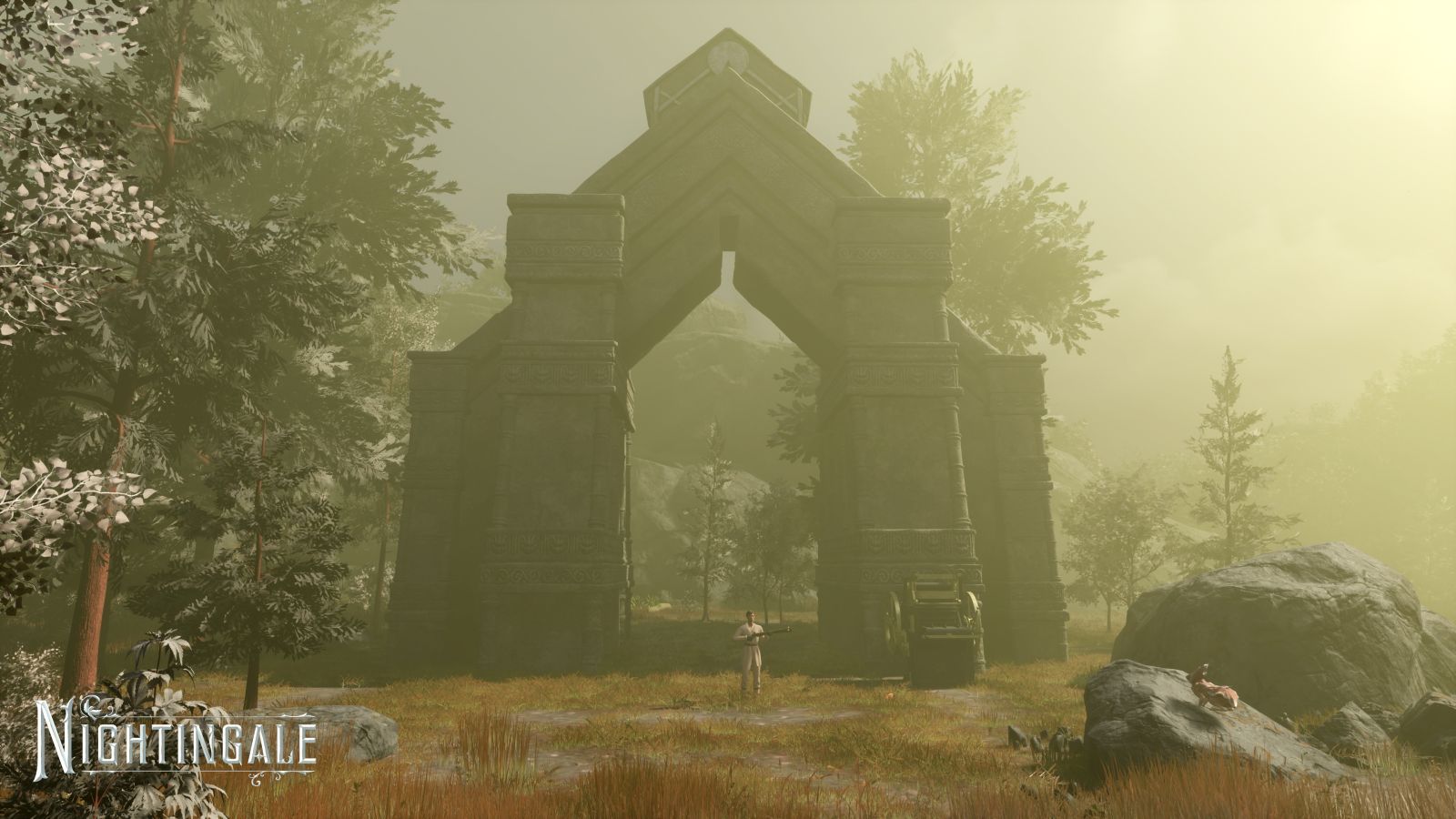 To help you escape the creatures you can’t quite dispatch, you’ll appreciate the climbing in the game, as well as your ability to safely ride an umbrella (or “Brolly” as they’d say in England) from heights.

Being a Realm Walker, you’ll be able to visit a nearly unlimited number of realms as the team adds them, but you’ll want to declare one of these to be your home. Dubbed your “respite realm”, this is where you’ll respawn when you die, and it’s where you’ll build your biggest base. You’ll spend a great deal of time here building and upgrading, though you’ll likely establish forward bases as you explore the realms. 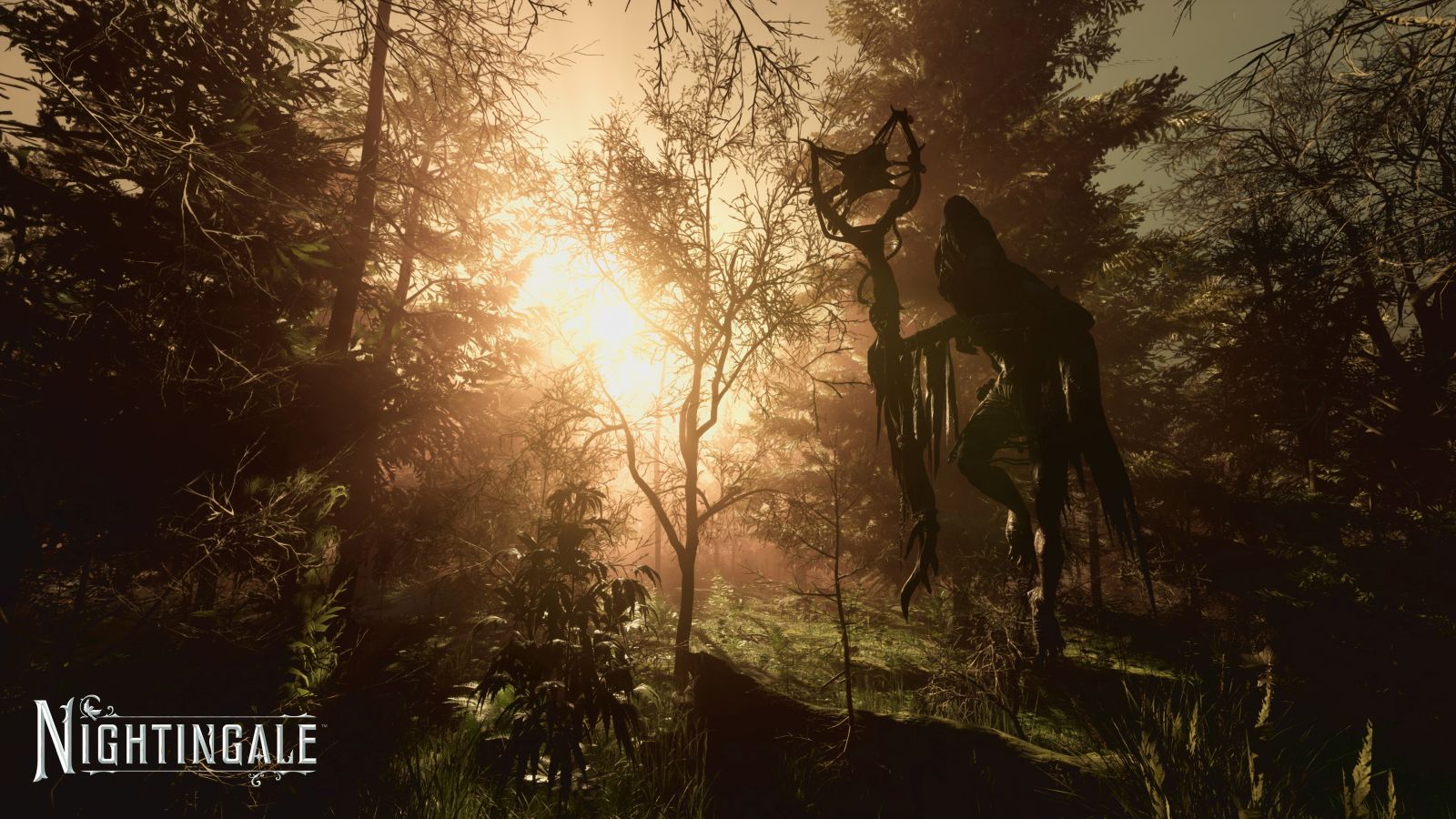 Nightingale is gorgeous – something you can plainly see in this new gameplay video. Last year the team pivoted from a proprietary engine to Unreal Engine 5, and it shows. From a technical perspective, the team is currently running the game entirely in the cloud, though it’s very likely they’ll look at decentralization after Early Access. The goal is simple – they want every single realm interconnected. You can always play, with or without your friends, and the entire universe is at your fingertips. To get to these other realms, however, you’ll need both technology and cards. 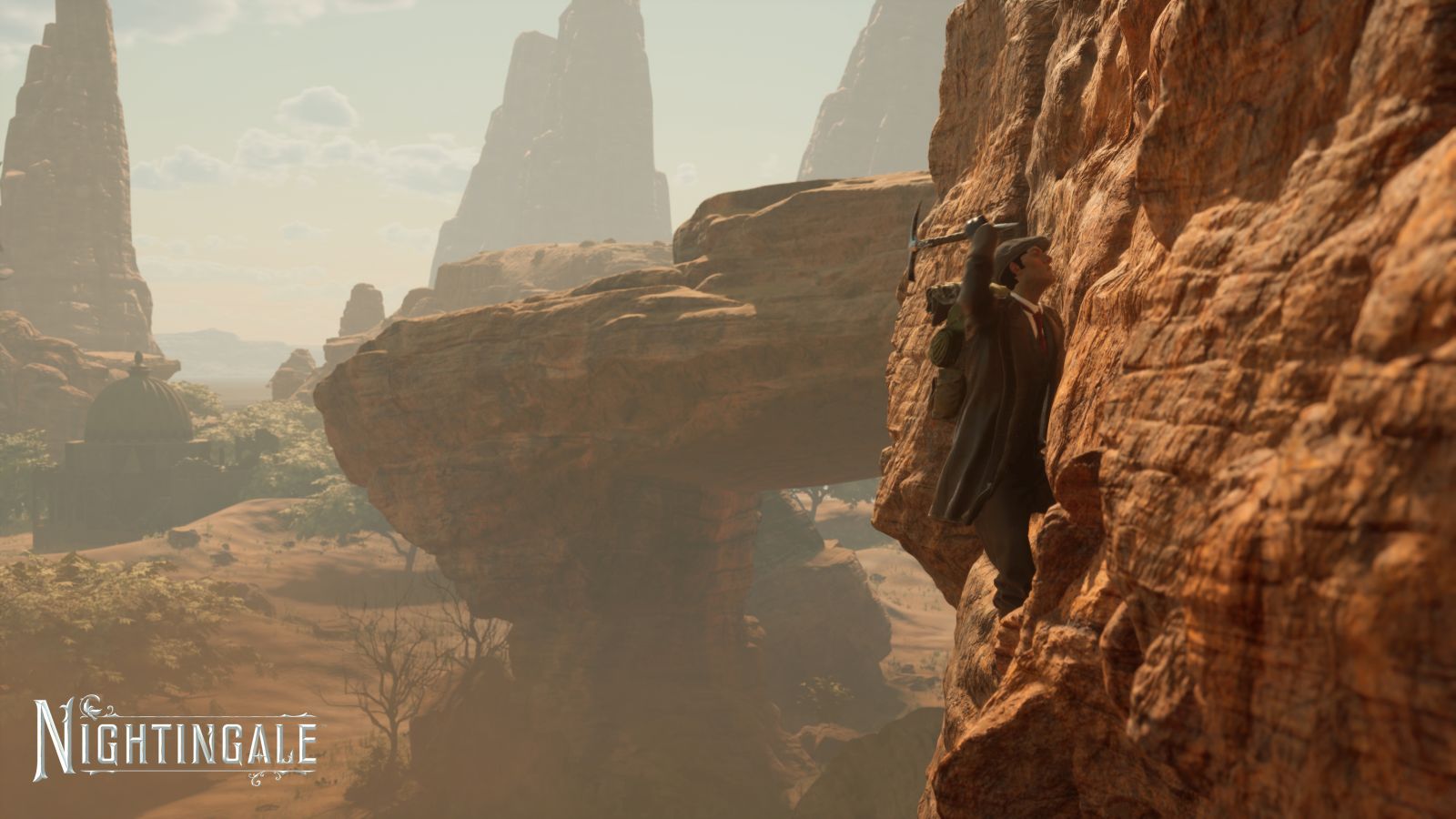 As you progress through the game you’ll eventually find realm cards. These are your key to other realms, and in each is a small chance to control where your next realm portal will take you. Through a small window you’ll see a potential realm target on the other side, allowing you to see if the biome, creatures, and whatever else lies ahead without entering. Instead you’ll be able to make some choices that will impact the outcome, such as influencing the environment, weather, creatures, resources, and much more. These realm cards represent the ultimate modifier for the game as they can be combined to create an even greater challenge. You can play with up to six players per realm, so bring more friends when you tackle bigger challenges.

Looking ahead, the team has an eye on how Early Access will play out. Currently they are running limited Closed Alpha testing, with seasonal content being added. In early 2023 this content will be ready to launch into Early Access. From there, the team is looking forward to working alongside the community to help build the most engaging game they can possibly make. 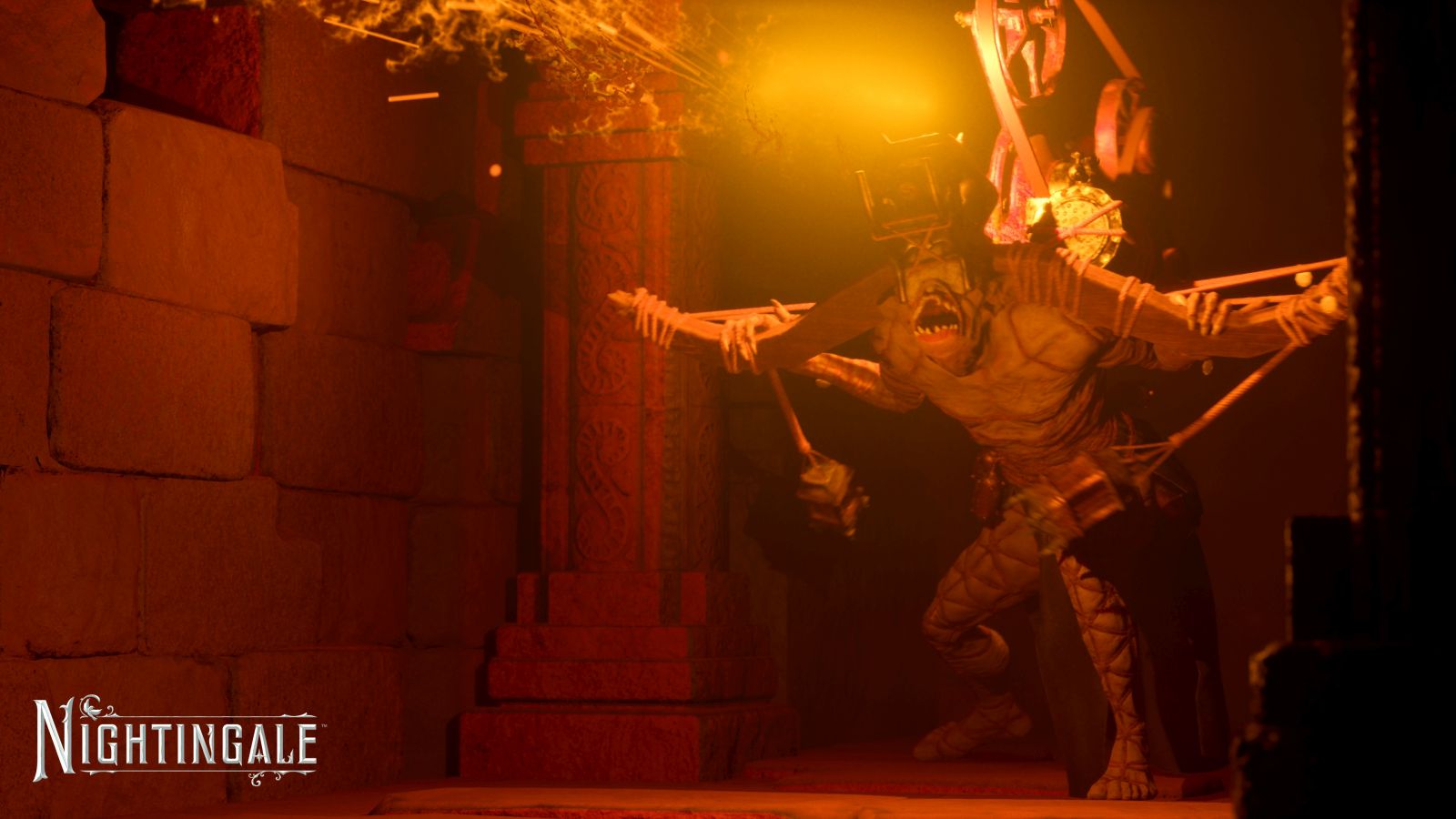 Stay tuned here to Gaming Trend – we are just as excited to play Nightingale as you are, and can’t wait to share the Realms with you.