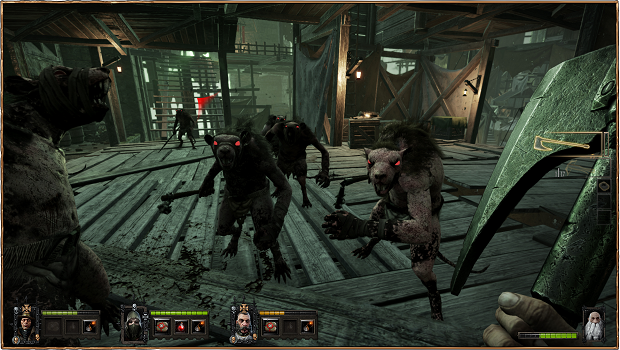 In the midst of towering booths, colorful lighting and thunderous sounds, you can often find smaller, niche game makers scurrying about the E3 convention center, eager to show off the games they’ve been toiling away on. For a variety of reasons, discovering these games are my favorite moments of the show –  they tend to convey unique ideas, or at least are not a sequel, and they invest in concepts that fall outside of the military shooter/RPG/open-world sandbox status quo. It’s a breath of fresh air, in other words.

One such moment was during a brief demonstration of Warhammer: End Times – Vermintide. It’s a first-person melee combat game, although you’ll have access to ranged weaponry as well, which challenges up to four players to make their way cooperatively through hordes of enemies. If you need a reference point, think of Left 4 Dead.

The bulk of the demonstration was done via pre-recorded video, it was here that I was introduced to the game’s gorgeous world which, by the way, is the first time a game in the Warhammer universe will be played in first-person view. The world design looks fantastic and appears to faithfully recreate the gritty, gothic architecture Warhammer is known for. The combat looks intense as you wield the likes of massive axes and blunt weaponry to dismember the army of enemies between you and victory.

By the end of the video I was longing to actually play the game, so much so that I was able to convince the empathetic developer to let me play the alpha build of it. “I just want to get a feel for the weapons”, I pleaded. There was no question in my mind that Vermintide looked cool, but I had to know what those big weapons were like to swing around. With the game booted up and some code executed via the command line, I was on my way to doing like the Queen of Hearts, taking heads clean off their shoulders. I can report that even at this early stage the melee combat, and the shooting as well, feel solid.

While an individual is free to break away from the group, the developer explained the importance of not venturing off too far. There will be instances where on your own you will become overwhelmed and require assistance. For example, you might encounter an enemy powerful enough to pick you up and pin you against the wall. If no one comes to your aid in time, it’s lights out. Additionally, while the game does encourage you to play with human teammates, if you want to play alone you’ll be paired up with bots.

The demo was short and sweet, and it left me extremely excited to get my hands on the game when it launches on PC, Xbox One, and PS4 later this year. Head over to the game’s website to sign up for the beta.