Here it is. Another Super Smash Bros. knock-off. This is MultiVersus, where Warner Bros. characters fight in friendly, cartoony, chaotic brawls. Batman and Superman are in it. Bugs Bunny and Tasmanian Devil are here. Shaggy and Velma are participating. Tom and Jerry, Jake, Finn, Arya, and many others join the fray. It’s a good list so far and more will come, but I can confidently say this about MultiVersus even though it’s a closed beta: MultiVersus will be the Smash knock-off.

Fighting feels like a mixture between Smash Bros. Ultimate (good) and Smash Bros. Brawl (bad), but balanced in a way that adequately combines the best from each game. There are multiple air dodges, there’s minimal hitstun, strong directional influence, and attack decay. Additionally, there are only two attack buttons and only three “Smash” attacks. There are major differences though: no blocking, which means no throws, except for characters with command throws; everyone has the same floating jumps, players can’t grab ledges but can stick to walls; but to counter the easier recovery, every fighter has a spike attack (meteor smash in Smash terms). Most notably, some special attacks have cooldowns. These additions and omissions make fighting frenetic and naturally encourages fighters to get in each other’s faces. I haven’t seen the kind of spamming and stalling like I’ve seen in Smash and it’s refreshing. People are having fun hopping around, looking for stylish, acrobatic combos.

Each character has unique attacks that fit their personality. Shaggy grabs a sandwich from the ground and uses it as a projectile. Batman utilizes his various gadgets. Jake is stretchy and can turn into houses and cars. Wonder Woman snaps her lasso of truth at her enemies. Bugs Bunny drops safes and generates cartoon ACME rockets from thin air. I haven’t seen a character and think “That doesn’t look like something they would do.” It’s evident Player First Games took the time to make sure each character fights and moves in a way that’s consistent with their personality, particularly in an animated sense – Arya feels great in animated form, for example. 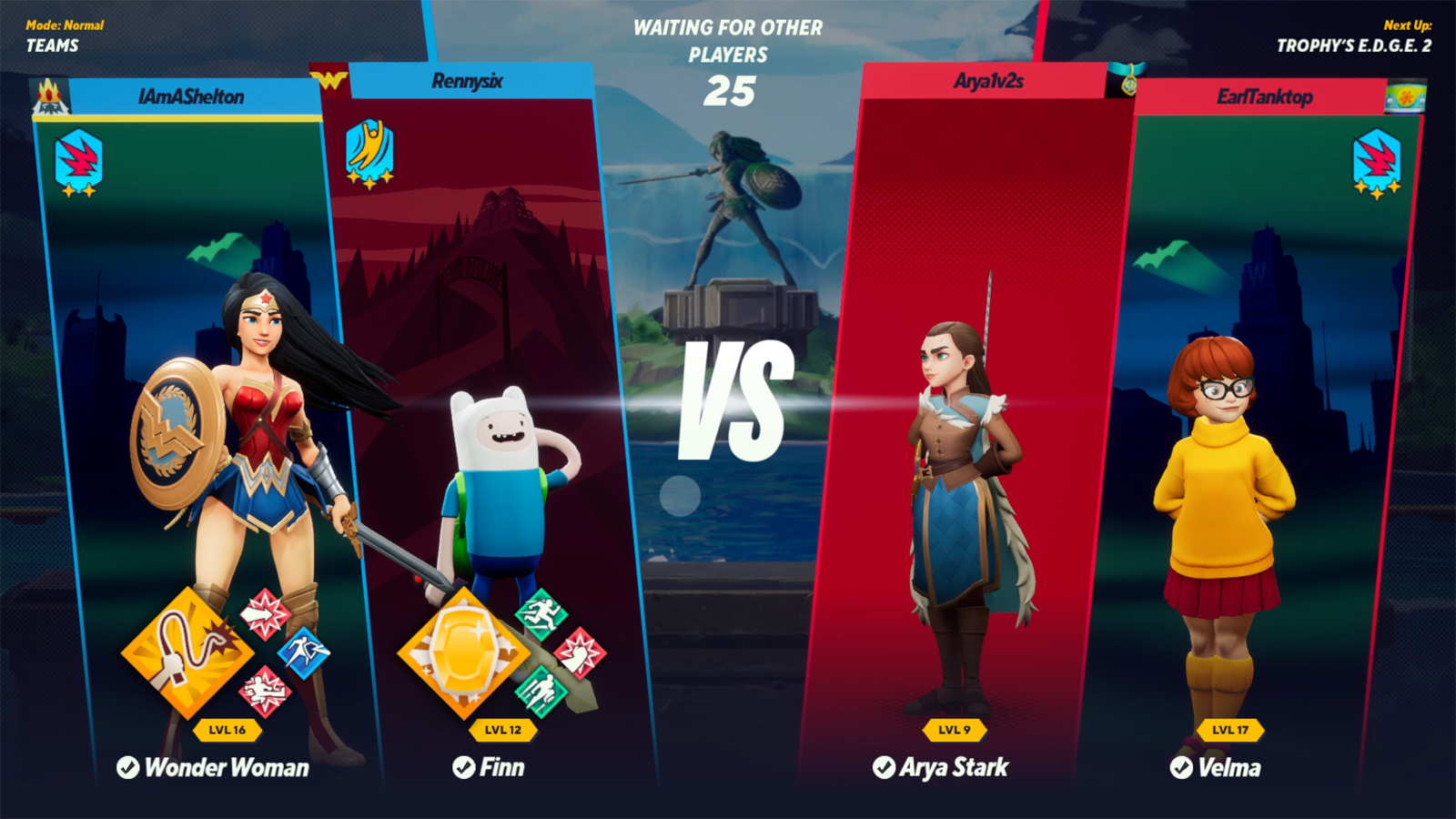 2v2 is the featured mode for MultiVersus, though it comes with a 1v1 and a four player free for all option. You can also fight against bots, which is useful if you’re starting with a character and want to learn attacks and combos in a virtual environment. If you want to get deeper into combos, attack priorities and the like, The Lab allows you to practice with adjustable parameters. It’s nice to have that during a closed beta. All of us could use it.

Characters have roles similar to Overwatch or MOBA’s. Wonder Woman and Superman are tanks. They have attacks and utilities that help them absorb damage for their teammates or create space by pushing threats away. Batman and Tasmanian Devil are bruisers, focused on getting in people’s faces. Arya and Harley Quinn are assassins, who use different projectiles and debuffs to add damage. The point is to create synergies between roles. On paper, the way role-based teamwork functions makes sense, but it’s harder to discern the impact of your role during a match. I’m hoping it will be easier to understand why you should pick one role over another.

What I’m concerned about are perks. These are customizable buffs that help you with different aspects of a fight. You can buff horizontal knockback by a percentage, choose a perk that gives you three jumps instead of two, and so many more. If your teammate uses the same perk, they stack and provide bigger bonuses. Here’s my concern: Usually when games have perks, it creates greater imbalances between characters, and some perks become what everyone should use, limiting player diversity. Thankfully, the percentage buffs are small – 4%, 10% — and you can only equip three, so you don’t feel the impact of many perks unless they’re stacked. There’s even a battle pass challenge that rewards you for fighting without perks. I’ve finished that challenge multiple times, and each time I haven’t felt like my team lost because I didn’t have perks. But I’m unsure if the perks available will be the perks that make it to the final release. So far, it seems perks won’t be oppressive towards player choice, but I’m not holding my breath. 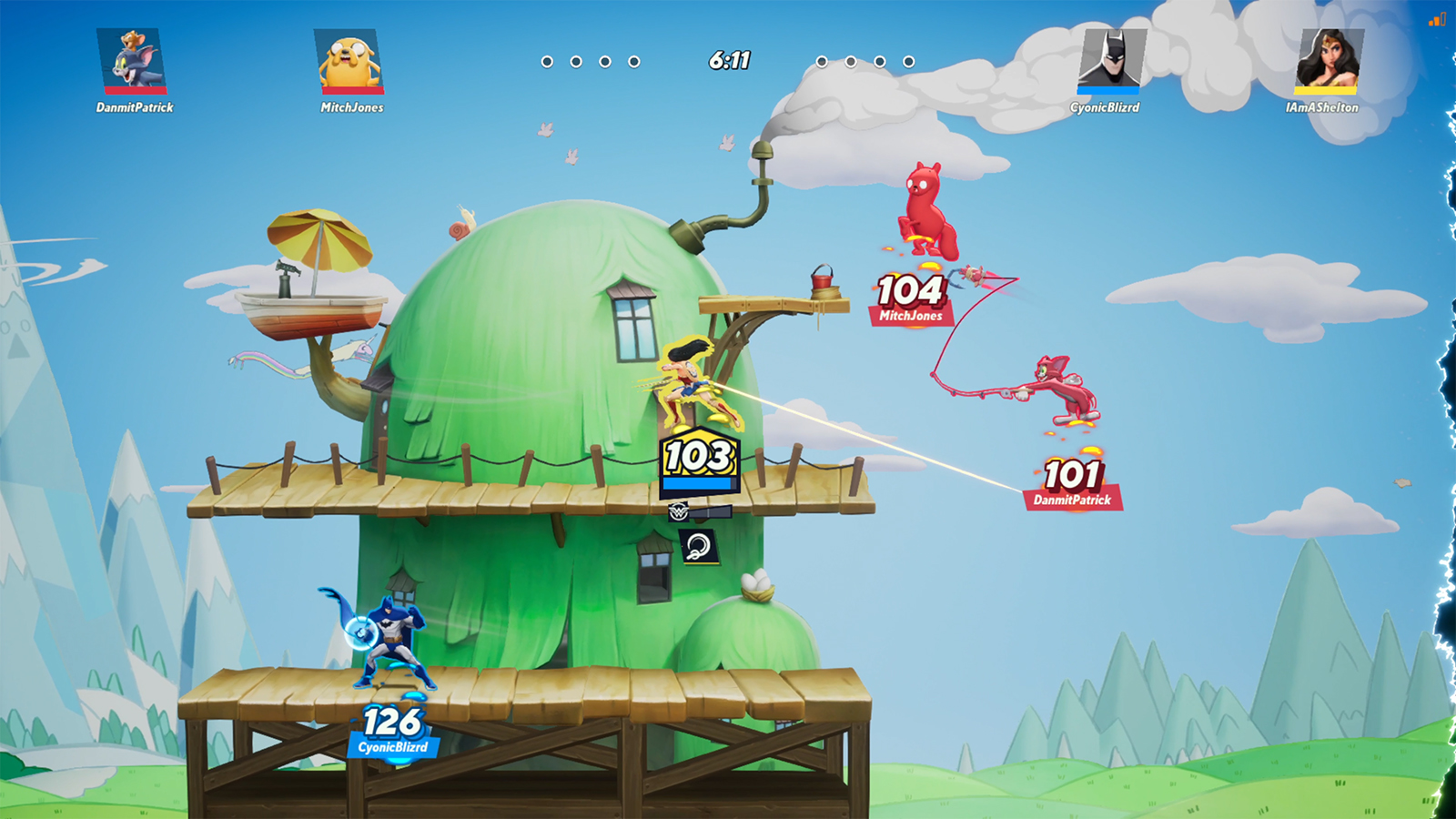 Where you fight is as important as who you fight with. No one has control over what stage is chosen per match, but you can see it before a match begins and choose your character and perks accordingly. Some stages are flat, some have platforms, and others have enclosed spaces that allow for lots of wall-bouncing. They don’t have stage hazards as disruptive as Smash, but they’re fun to look at. I’m always excited to fight inside the Batcave, for example. I get pumped by the Batman music that sounds like it’s from the animated series.

Online is the engine that makes MultiVersus go, and it’s smooth most of the time. Player First Games made it a point to use rollback netcode, which is a wise choice for fighting games. On a good server, the matches feel like you’re playing with friends on a couch. Thankfully, few games have had poor connections. My worst experiences commonly occur late at night. Otherwise, it happens infrequently. Nevertheless, connections are so good that I forget I’m playing with people on other platforms.

As a free to play game there is a battle pass, of course. There is nothing here you haven’t seen before. It’s a two-tiered battle pass with a free and premium tier. There are new challenges every 24 hours that give progression towards the battle pass, and every reward is cosmetic – skins, voices, banners, icons, etc. You also earn gold which you use to unlock characters, and you’ll be able to spend money to buy more gold. In about 14 hours of play, I’ve earned almost 8,500 gold, and I’ve spent about 600. If I wanted to, I could buy nearly every character right now. And that 14 hours whizzed by. You can also use your gold to buy toasts – not glasses of champagne raised in celebration, they’re slices of bread. Toasts convey cheers for a well-fought battle or respect for a helpful teammate, but they also give 25 gold to the player. You can toast anyone in your lobby after a match, but you have a limited amount. It sounds like a great idea because you’re giving value instead of a purposeless vote like Overwatch. It’s not much but it stacks considerably over time. I’ve received almost 400 gold in the form of toasts in my 14 hours. Will people spend their gold on an item that’s meant to give gold to other people? It’s an interesting experiment.

MultiVersus is coming to PC, PlayStation, and Xbox in 2022.