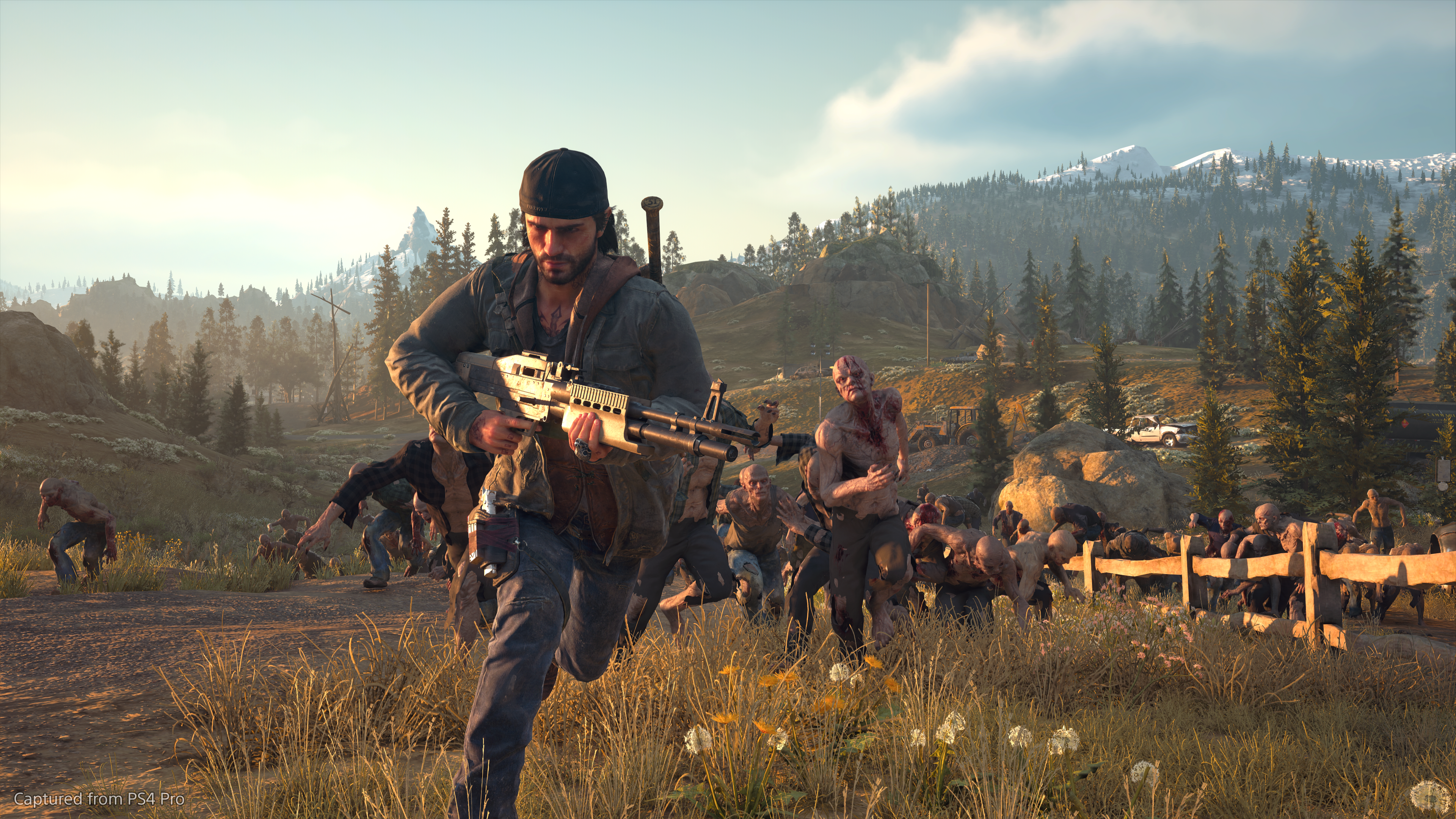 There were no shortage of zombie games this E3, but Days Gone may well have claimed the prize for the most number of zombies present in any one demo. This PS4 exclusive title puts you in the shoes of Deacon St. John, a drifter and bounty hunter who’s trying to scrape out a living in a zombie infested world. Days Gone is both bleak and beautiful in equal parts; hideous, decaying zombies and puddles of polluted, stagnant water stand in sharp contrast to the pristine wilderness and hazy mountains in the distance.

My demo opened as I rolled into a town on my motorcycle and received a request from the locals: clear out a massive horde of zombies that has gathered nearby. A massive horde, huh? Sure, fine, whatever. I’ve played zombie games before, bring it on. Confident I could handle whatever was waiting, I hopped onto my motorcycle and headed toward the abandoned construction site, where the zombies were allegedly gathering and found… an actual horde of zombies! Like, a literal terrifying number of undead bodies just standing around. I was expecting ten, maybe twenty of the undead creepers, but this was a zombie collection on a whole other scale. I later found out that there were more than 250 of them all gathered in that one small area… and this was considered a ‘baby’ mission; future missions would have far more undead shuffling up to try and eat my brains.

So, just how does one single-handedly take out hundreds of zombies? The answer turned out to be a careful combination of laying explosive traps, aiming well while running like hell, and no small amount of luck. The zombies in Days Gone are, fortunately, not the most alert creatures, and will happily remain huddled together in a swarm of decaying flesh so long as you don’t make too much noise or start actively blowing what remains of their brains out. This gives you plenty of time to scour the area for resources, lay traps, and craft goods, such as stamina boosting drinks and molotov cocktails, to help increase your odds of survival.

The good news is, Days Gone allows you to plan and set up your attack any way you want. There are plenty of trucks and barrels filled with flammable material scattered throughout the construction site, and you can place explosive devices anywhere you want–literally, anywhere. There are no ‘attach here not there’ restrictions, and no limitations about what you can try to blow up. Be it a tanker truck filled with explosive chemicals or a cliff wall that you want to bring down on top of a wave of zombies, if you can get to it, you can place the device and blow it up. The bad news is that the zombies all have a kind of hive mind, unpredictable artificial intelligence, and they may not decide to walk into even the best laid of traps.

This mission was incredibly difficult for everyone who attempted it. I watched one woman shake the controller in frustration as the horde managed to find an entirely new path out of a pit she had gathered them all into during her third attempt. One man had done a good job of eliminating most of the group through a well-placed series of explosives and was using his motorcycle to kite the remainder out, picking the fastest off one by one as they caught up. He missed hitting an explosive device he’d planted on a tanker truck and was attempting to double back and try again, when a wave of zombies came at him from the side, physically hurling themselves against the bike, and throwing him to the ground and a very, very messy death. While I was unable to eliminate the horde during my demo, I wasn’t alone. It was great fun watching others try to tackle the mission, and apparently only three people had managed to beat it that day.

Days Gone will be coming exclusively to the PlayStation 4 on February 22, 2019. Check out Gaming Trend’s continuing E3 coverage for more previews, hands on, and a whole lot more zombies.