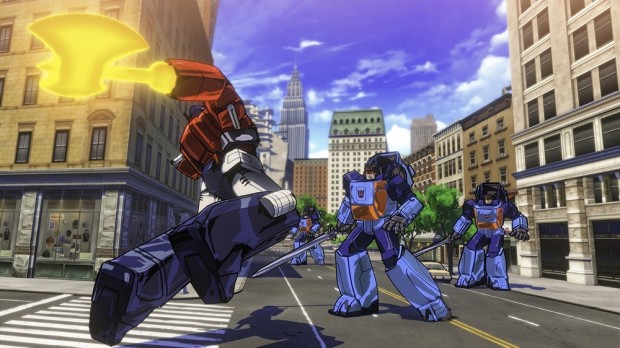 When it comes to Transformers games, the quality tends to be mostly hit or miss. There have been some high points in the franchise, but with just as many uninspired cash-ins, many Transformers fans become rightfully cautious whenever a new game gets announced. It’s hard to say how Transformers: Devastation will turn out, but if it’s anything like the brief hands-on time I experienced at E3, fans can temper their concerns.

Easily the most notable feature of Transformers: Devastation is its visual style. Taking inspiration from the popular 1980’s cartoon and IDW comic series, Devastation takes on a cel-shaded look, including thicker outlines and brighter colors. This isn’t your ordinary cel-shading, though; there’s a deeper level of detail, with each Autobot showing a higher level of sheen and shadow, resulting in one of gaming’s most appealing visual styles in years. Coupled together with the fact that many of the major original voice actors are reprising their roles and you have one of the rare examples of a game that seeks to respect and capitalize on its license. Like the Batman: Arkham games, this will appeal to many people, but fans are the ones who will enjoy it the most.

Also helping to provide confidence in the title is the fact that it’s being developed by Platinum Games, the team behind beloved action titles like Bayonetta, MadWorld, and Metal Gear Rising: Revengeance. As a third-person brawler, Transformers: Devastation captures the same essence as these aforementioned titles, coupling fast-paced, combo-oriented gameplay and applying it to the Transformers universe.

In Devastation, players can transform from Autobot to vehicle at any time, and Platinum made use of this ability by implementing it directly into combat. Players will be able to perform a few quick melee attacks, followed by an instantaneous transformation to run your opponents over, then back to Autobot again to deliver a final uppercut, all within a single combo chain. It made for some awesome flowing attacks and feels so natural for a Transformers game.

Playing as Optimus Prime, my hands-on time took place in a city under attack by Devastator. The towering Constructicon was several times my size and posed a massive threat. After firing off a few rounds at my gargantuan opponent, it became apparent that his weak point was his head. I grew closer to Devastation and began to pound away at his feet, slowly chipping away at his health bar in the hopes of toppling him. Before long, he had fallen to his knees, where his head was within reach and vulnerable to my melee attacks. After a few well-timed punches and follow-up combos (including a truck to the face), my opponent had been defeated, leaving Optimus victorious; an awesome fight indeed.

The next area showed Bumblebee as the playable character, who played noticeably different than Optimus. As a smaller character, the yellow Autobot had quicker attacks, but did not hit quite as hard. It was at this point that I witnessed Bumblebee’s rush attacks, where he reached full speed as a car, impacted into several Decepticons and immediately continued the combo with some melee attacks. It’s obvious that the game is playing up these combos as a way to make combos fresh, with emphasis on chaining vehicular moves together for maximum effectiveness.

Licensed games don’t always fare so well, but Transformer: Devastation shows huge potential. The visual style is both gorgeous and nostalgic, and the combat transformations are unique while still feeling distinctly like Platinum. With three other playable characters that I did not get to sample — Grimlock, Sideswipe and Wheeljack – the game shows great potential to be a fluid and varied brawler. If the full release maintains the same level of quality seen here, Transformers fans may have a hit on their hands.

Transformers: Devastation is set for a Fall 2015 release. For more on Transformers, as well as more E3 coverage, check back to Gaming Trend for more hands-on impressions.