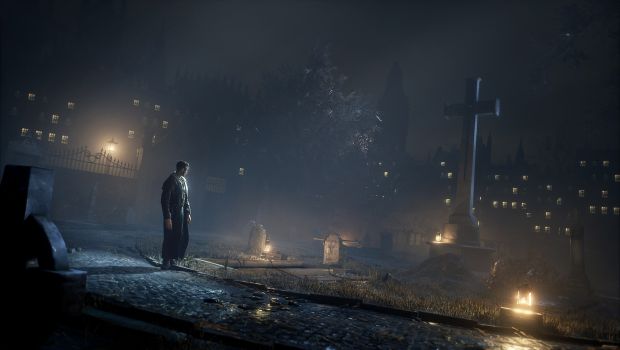 You need to feed. That’s how the demo of Vampyr started, in our time at E3.

Then again, that might be a misnomer. Playing as Jonathan, a doctor lost amidst the backdrop of a falling 20th-century London, you always need to feed. That is your infliction, as a man plagued by vampirism — you have a hunger growing within you, and it must be sated at some point.

It’s a strange departure, for the team behind last year’s indie time-travel story Life is Strange. Wheeling from a thoughtful, somber tone to the melancholy and dark, you wouldn’t recognize Dontnod Entertainment’s fingerprints right away, but when the wheels start turning they become readily apparent.

As Jonathan, you are inherently split between your duties as a doctor, a man sworn to protect the sanctity of life, and the price of being a vampire. To progress, you must feed; often, to do good deeds, you must perform equal or greater evils. Through the demo, you can already see this dichotomy, as your better angels give way to crushing choices. At one point, you must feed to advance, and you are given free reign to choose who it will be. The indebted shopkeep, who took out more loans than he could handle? The loanshark, a drunk single father who inflicts misery onto the whole block? Implications branch out from all of them, and your choices shape London as you continue on your journey.

Beyond dialogue and choices, there’s elements of exploration and combat similar to Dontnod’s previous effort, Remember Me. The combat looks much cleaner and simpler this go-around, but will likely be necessary throughout the game. Vampire hunters roam the street, and performing actions that reveal yourself as a member of the living dead can mean the difference between bloody combat or passing like ships in the night.

What piqued my interest was the adherence to the vampire mythos. Though you have many powers like super-speed, incredible strength, and the ability to analyze the blood of others, you are also subject to the limitations of being a vampire. In one segment, a developer showed that as a vampire, you must be invited into a home to enter it. Regardless of the player carrying out tasks for a character, they were still wary, and refused to invite the good doctor into their house. (Probably the right choice.)

Because of this, the developer was forced to use his mesmerizing abilities to force the other man under his will, then lead him to a dark corner to “extract” his blood. As the doctor fed on the poor sap’s neck, a sort-of Assassin’s Creed segment played out, where the victim shared some final words before passing away. He mourned his death, wondering who would look after his boy now that he was gone, and lamented his mistakes, wishing he had been a better father.

It’s not out of the question to assume there was some waterworks being held back in that demo room, a feat surprising for a demo at a show as loud and grand as E3. But this demo really affirmed that Dontnod Entertainment might be moving in new directions, but this team knows where it is going. Regardless of the success of Life is Strange, or the less-stellar receptions the studio had in Remember Me, Dontnod is at least prepared to breach some new ground, while delivering the same meaningful, emotional moments of choice that has defined previous titles.

Look forward to more on Vampyr as we approach its release in 2017.