We got to sit down at PAX Unplugged to play a game of Meeples and Monsters. This simple-yet-complex bag building game is set in the city of Rowan, which is both underdeveloped and surrounded by monsters. In the early game, players focus on building a force of meeples, building resources, and upgrading their pool of meeples from peasants to clerics, warriors, mages, and knights. The late game sees players scrambling to one-up each other in completing missions, slaying monsters, and trying to secure the lead spot on the point board.

The number of actions you can take is determined by the number of meeples you have in your tavern; meeples who took actions during the last round have to spend time in the inn recovering their energy. Early on there’s just simply a scramble to get peasants, indicated by white human-shaped figures, into your bag. You can then send your peasants to study to become a more powerful class, construct buildings, fight monsters, and more. 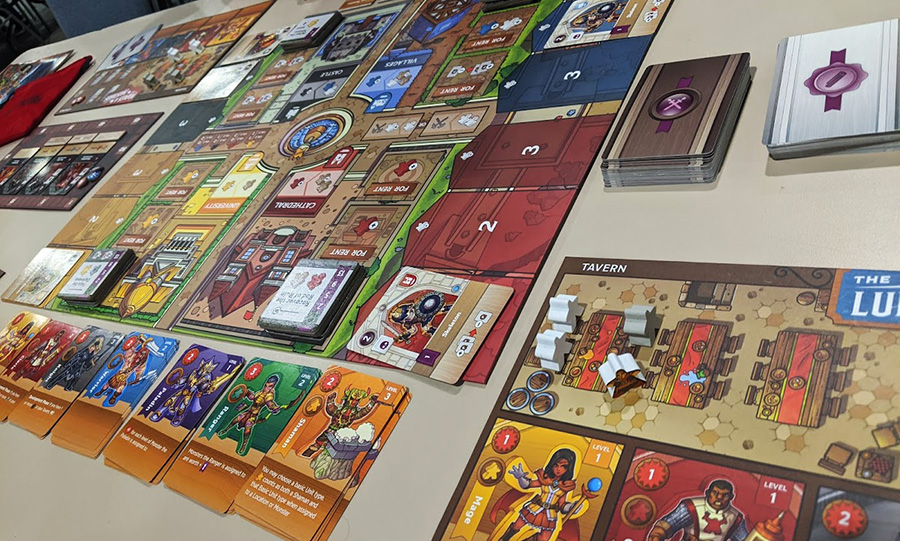 Picking up the flow of gameplay is easy, but the various quests, tiles, and king-of-the-hill mechanics add no shortage of complexity to any given game. Monsters appear on the board at the end of each round, and defeating them earns you monster card trophies as well as victory points, which allow you to advance up the leaderboard. You also have a set of quest cards, which reward you with victory points for achieving various requirements, such as having a certain number of classes in your tavern, defeating a certain kind or level of monster, etc. Completing these quests will also award you victory points, allowing you to move up the leaderboard, making the late game a mad-dash of trying to one-up your fellow players. 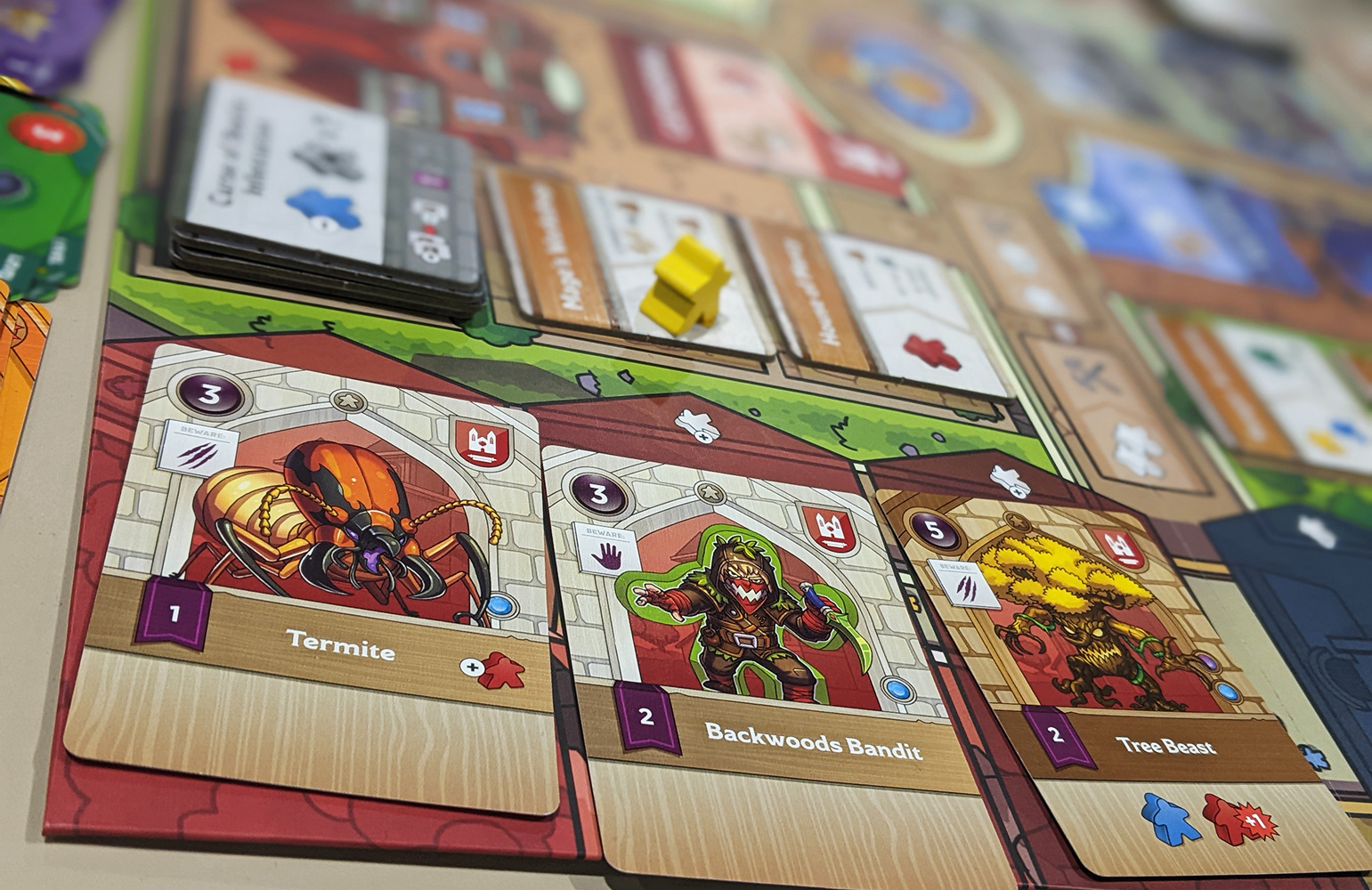 While having a big pool of meeples is important, having the right kind of meeple is vital to accomplishing your goals. Peasants are easy to get, but they’re not terribly strong, and can quickly overwhelm your forces; at the start of your round, you’ll draw between 4 and 6 meeples from your bag, depending on how far you are into the game, and having a tavern full of nothing but meeples can leave you with few options by the middle of the game. 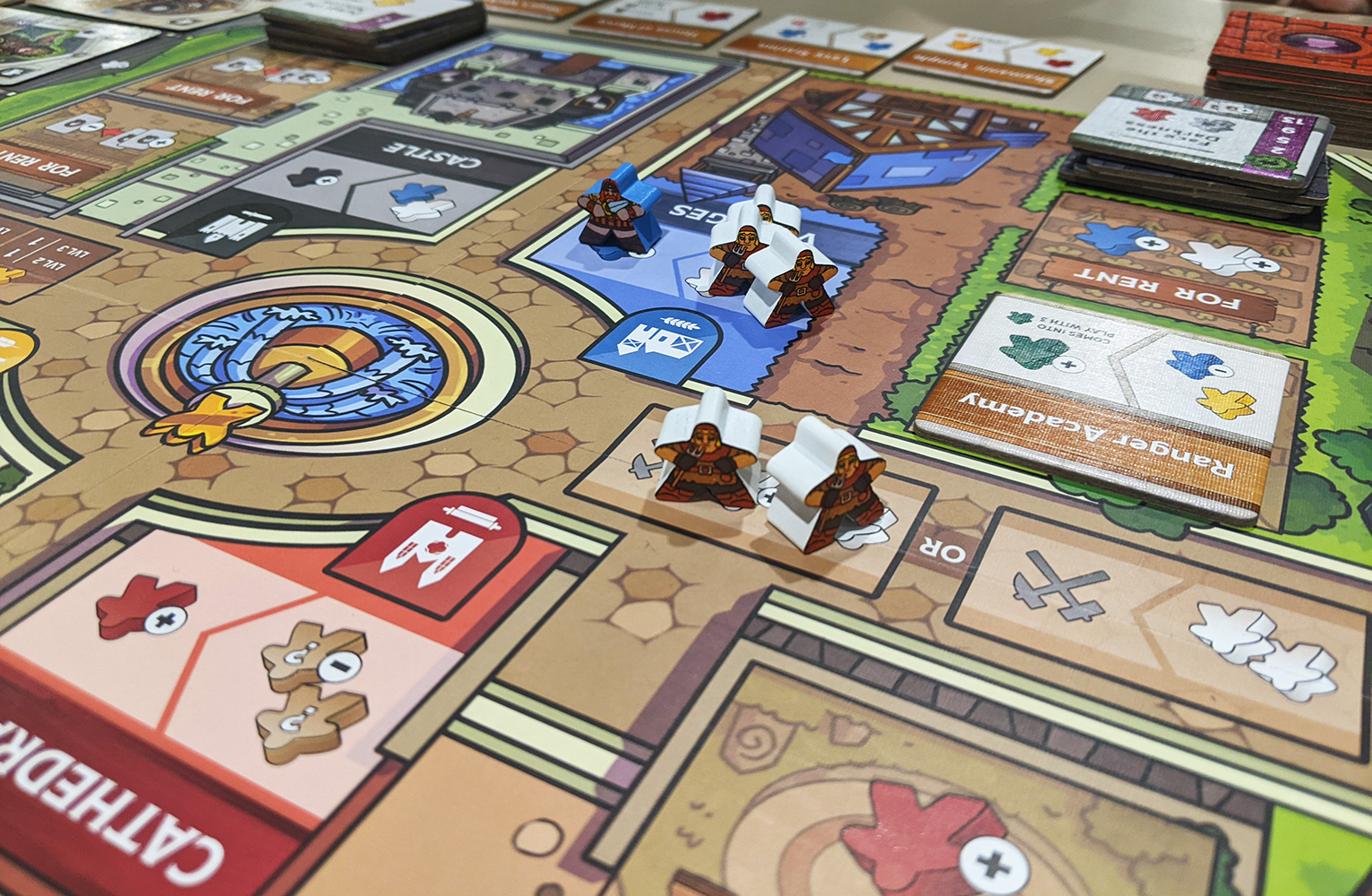 Once you’ve unlocked different classes, you can spend time and resources to upgrade them, but even these upgrades should be approached strategically. Some classes require you to give up victory points and move down the leaderboard, and not all upgrades are the same. Some upgrade cards are printed with bonuses which give class bonuses to that particular player; some upgrade cards have more powerful upgrades, while some have no upgrades at all. You’ll have to grab the top card from the deck for each class when upgrading, which can spark a mad dash to upgrade a class if a powerful card is on top, while a card without additional benefits will find everyone at the table stalling on that upgrade, hoping someone else will break down and claim the less powerful card. 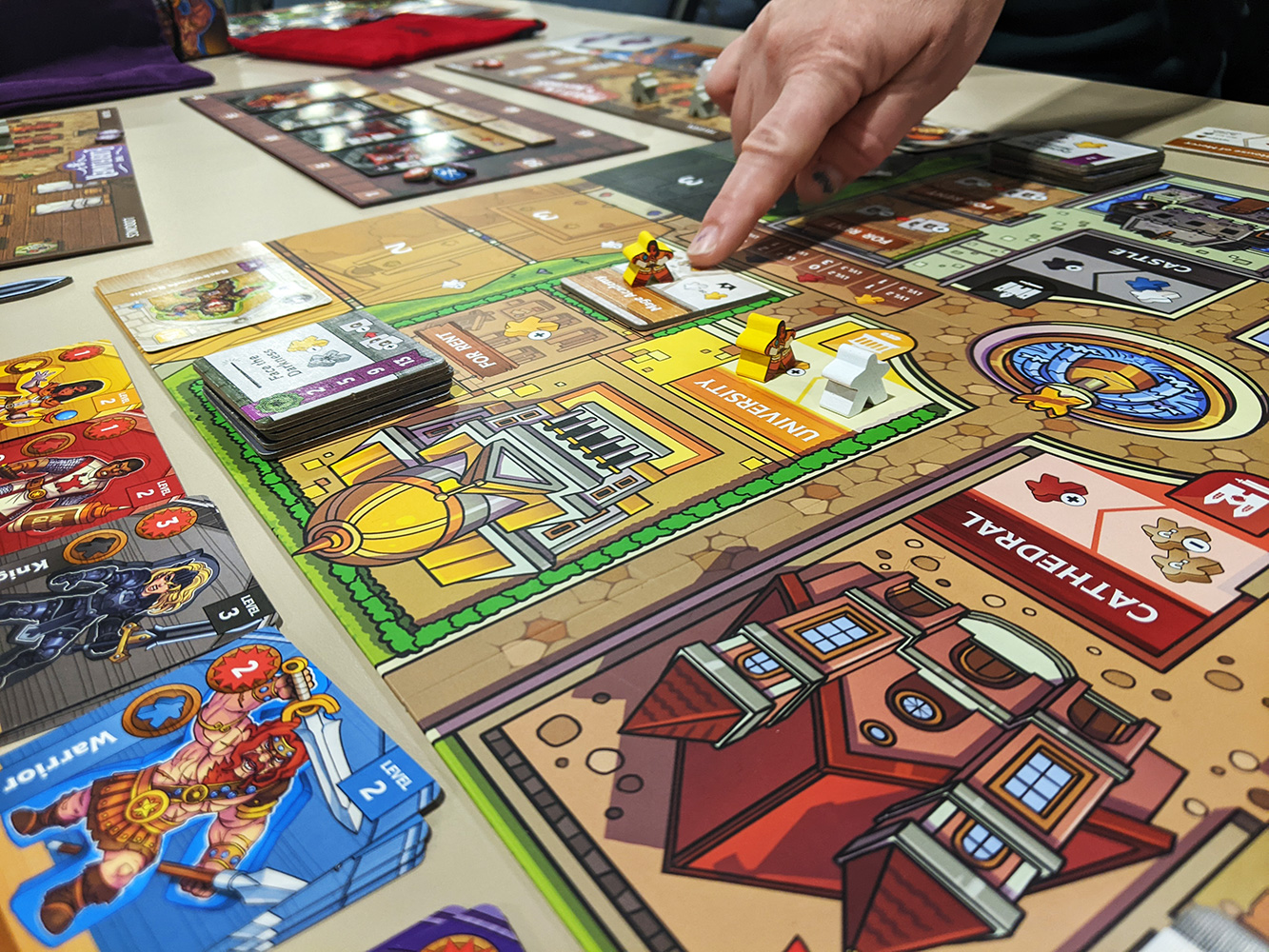 Meeples and Monsters can be played solo or by up to four players. Meeples & Monsters ran a successful Kickstarter campaign in March of 2021, but if you missed out, not to worry! Retail copies will be available in spring of 2022.