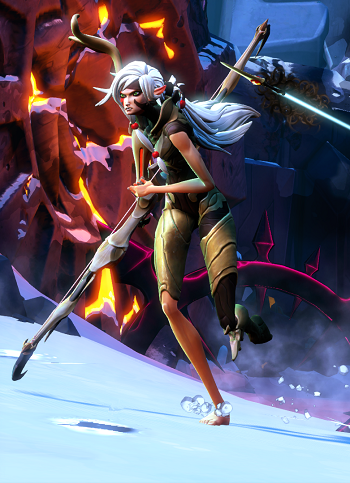 While much of Gearbox’s marketing of Battleborn has gone into showcasing the shooter’s expansive roster of distinct playable characters, in the several hours I was recently able to sit down and play the game I found myself constantly gravitating towards only one of them.

That’s not to say that Thorn, the Eldrid archer that I played as the entire time, was inherently more viable than any of the other characters I had to pick from; I had just spent my first match learning the ins-and-outs of Thorn’s abilities, strengths, and weaknesses, and was eager to play another match with my newfound knowledge of the character. This phenomenon went on for several matches until I realized that I was doing with Thorn what I’d done with characters in dozens of fighters and class-based games before. Thorn was becoming my “main.”

It’s been close to ten years since I actively played a competitive shooter. I played Halo 2 on a pretty regular basis with my friends, but it wasn’t often that I’d be able to make it ahead of the ones who spent hour after invested hour playing on each map, knowing exactly where every power weapon was hidden, and had honed their skill to know exactly how to take out me with all my lesser experience. There was always a feeling to me that while we were all on a supposedly equal playing field, as long as I was fighting over ownership of the best weapons in each match I would never be able to excel at the game. The setup felt to me like something that while equal, lended itself to those with the fastest reaction time and the greatest knowledge of the map.

Which is why Battleborn, and the way that I gradually latched onto Thorn in the same way that I would Ryu in Street Fighter or a Mage class in an RPG, has me more intrigued than most competitive shooters ever do.

Battleborn hones in on my interest in fighting games, because playing it requires an intimate understanding of your character. Since I played as her for many hours, I’d become accustomed to approaching situations and certain foes in very specific ways, ways that complemented Thorn’s talents and drawbacks. As an Eldrid character, Thorn doesn’t possess a shield, but rapidly regenerates health. She doesn’t have the brute force of tank-like characters such as Montana, but if I ever found myself overwhelmed, using her above-average speed to retreat to a less populated section of the map would allow me enough time to heal and then start picking off people with my bow from afar.

When I found myself facing an enemy like the rapier-wielding Phoebe, I would have to keep my distance to avoid being quickly taken down by her strikes, and constantly be wary of her teleportation ability that would help her close in on me.

These are the same types of things I think about when playing fighting games. Knowing your character, and knowing how to best handle others, is key to excelling in those games, and the same is true of Battleborn. Which is why, despite 14 other currently-available characters to pick from, I stuck with Thorn through all my time with the game.

Along with learning how to best approach certain situations, knowing a character helps inform decisions you’ll make with the game’s buff and debuff system. Using in-game currency you’ll buy equipment packs of varying rarity, which will allow you to add passive stat increases like movement speed, health, and damage. The wealth of options will help you compensate for some disadvantages, but only if you know your character well enough to optimize your loadout. As I learned more about Thorn, I was able to customize my equipment loadouts to her strengths and weaknesses. Thorn doesn’t have a shield, so using one of my three open slots for upgrades, I gave her one, and used all my equipment slots to increase its power.

Battleborn may have a roster of 25 unique characters, but what excites me most going into the game is the idea of mastering only one. Whether I stick with Thorn or not will be determined in the coming months, but I’m interested to see if investing my time in a character as I’ve done in so many other genres will help Battleborn give me a new appreciation for a competitive shooter that I haven’t felt in quite some time.