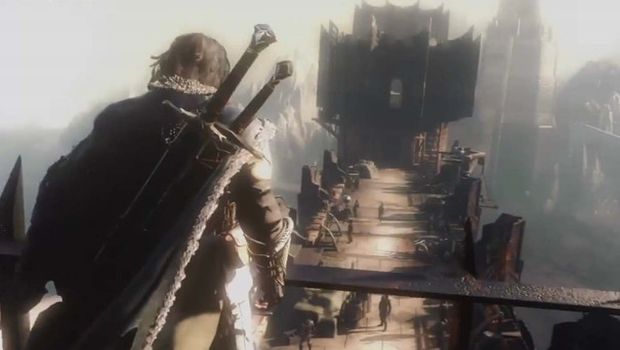 Ever since Peter Jackson’s Lord of the Rings trilogy took the world by storm, Middle Earth has had a place among the world of gamers. LOTR has had many different incarnations over the years, but the newest addition to the franchises divergent catalog is by far the most daring. Shadow of Mordor is an entirely new story following Talion, a human warrior feared among the dark of armies of Sauron due to his deadly cunning, terrorizing martial skill, and supernatural connection to the Wraith world, the place one enters when they wear the One Ring.

In the time we had with the game we were able to traverse the lands of Mordor before they became barren wastes, and where Talion fulfills his duties as a ranger of Gondor, harassing the activities of the Orcs and other remnants of the dormant dark lord’s  previous army. Shadow of Mordor’s territories are truly vast, and filled with random events and encounters reflecting how dangerous the world of Middle Earth truly is beyond the boundaries of the Shire. From the point where we began, Talion is tasked by a mysterious old mystic that he must dominate the mind of an Orc commander in order to further unravel the nature of his unique wraith abilities. As Talion sets off, he enters a land of rolling fields, blanketed in swaying tall grass and lonely trees. The charred and broken skellingtons of ancient forts litter the hilly terrain, serving as makeshift camps for wandering bands of Orcs or tired peasants.

Even at this early stage, there was plenty to interact with and Talion’s controls were fluid and natural. The ranger’s superb agility allows him to move pretty freely past obstacles, climb up and atop ledges and walls all with a few button taps, yet it never feels floating or out of control. A couple of times on my journey to possess my targeted orc commander I was discovered and quick set upon by a patrolling group the black-blooded fiends, and while their assault wasn’t particularly well organized, they certainly knew when to take advantage of an opening and land spear thrust or arrow. Talion’s balance of attack and defensive skills lead me to victory in most cases, but there was a time or two when I needed to flee or risk being overwhelmed. The amount of opponents that the game can support at once was certainly impressive, and while Talion’s capabilities allow him to be a one-man-army in the hands of veteran, there is more than a little wisdom in picking enemies off with a combination of fast assaults against small groups and stealthy one-on-one kills.

Altogether, between the size of the map and the occasional enemy intercept, it took me the majority of my time with the game to even reach my target’s location, about 20 min; a solid chunk of open world gameplay for a demo. Now the actual act of placing the Orc commander I’ve selected under my control isn’t going to be as direct as I hoped. After interacting with the event indicator the game flags a message across the top of the screen stating I need to defeat 30 Uruk-Hai before the commander will reveal himself. I also need to accomplish this task without being struck once.

Pressed for time, I decide to dive into the fray and take my chances. A first few minutes go by smoothly and savagely, and I manage to pilot Tailon to a kill count of 28 behind a series of parrys, counters, and decapitations. But eventually one of Mordor’s denizens deflects my attack with his tower shield and jams a halberd into the hero’s chest. The challenge flashes as “failed” across the top of the screen and I shallowly curse with the feeling of time wasted, but the monsters work isn’t done. Now staggered and surrounded, the combination of Orcs and towering Urak-Hai begin to pile on the damage, and in seconds Tailon has fallen. This in itself isn’t the end of everything, Tailon’s connection to the Wraith-world allows him to resurrect at spiritual towers scattered across the map, protecting him from the true grasp of oblivion. However, in way of a penalty not only has my progress been pushed back a ways, the status quo of my enemies has shifted as well.

A cut scene showing the enemies command structure begins to shift in response to Tailon’s failed raid. Some orcs receive prestige and influence, gaining control of more forces and slaying those who before stood in their way, and in other areas foes before unknown rise to fill the gaps in the ranks. Now when Talion arises, the patrols, events, and options are a bit different than they were before, as well as the challenges the Mordor forces now present. For fans of not only Lord of the Rings but fantasy games in general, Shadow of Mordor was a striking addition to the open-world genre. While not exactly a new IP considering its roots, it is a new approach to a brand which had grown shy to the idea of challenging itself. This game has a lot of potential and is well deserved front-runner for 2014’s jam-packed October release slate.