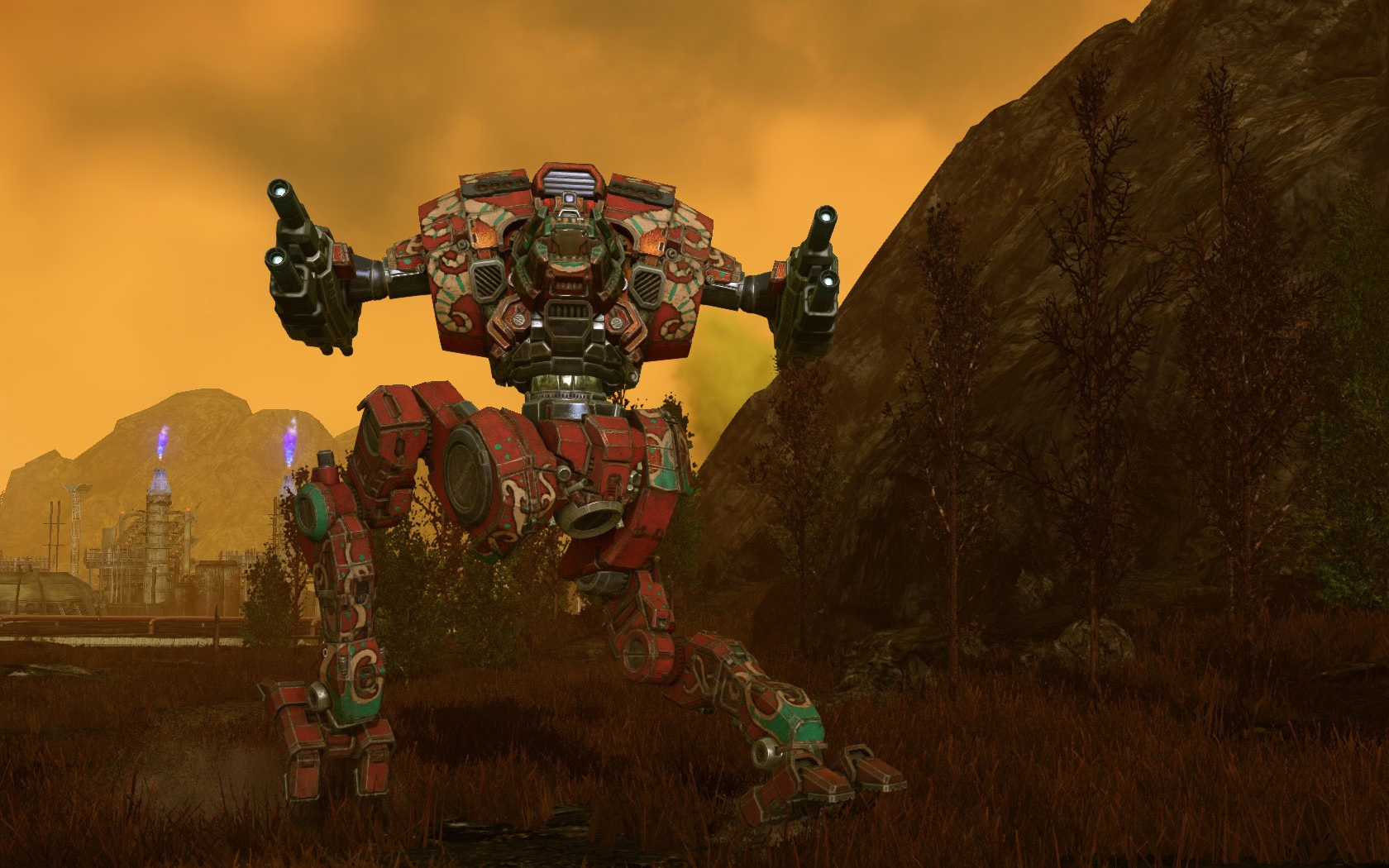 The year in the MechWarrior universe is now set to 3057. Although Piranha blurs what is considered canon for the established timeline, it will be interesting to see what could come of the game if they adhere to the reformation of the 2nd Star League in the next few years. A united Inner Sphere defense front against the Clans could make for interesting game play if done properly, especially if they maintain Clan Nova Cat breaking ranks and joining forces with the IS, leading to Clan retribution.

Out of the box, the Uziel is in the top ranges of overall speed when contrasted with other Medium mechs. Its default acceleration, torso turn and base turn rate outpace its peers as well. This is good because its standard armor layout is lowest of all medium mechs so you will need all the agility you can muster to keep alive.

This Uziel is focused quite heavily on an energy-centric loadout as only 2 of its variants allow for energy based weapons to be outnumbered by other offerings. Weapon hard points are evenly distributed so you won’t need to concern yourself with losing most of your firepower should you suffer a critical hit and be walking around with one less arm.

You will find yourself adopting light mech tactics of hit and run, but unlike a light mech, the Uziel can pack a respectable amount of firepower to leave a memorable sting. The Uziel’s biggest concern in combat with light armor and a reliance on energy based weaponry is overstaying your welcome and overheating.

Weighing in at 100 tons, the Annihilator is a proper assault mech sporting the heaviest energy loadout available to the Inner Sphere. Although some Annihilator variants allow for what can be some rather punishing ballistic configurations, it has the most energy hard points in an assault class available to the IS. When contrasted with the Kodiak that has lasers mounted on lasers it falls a bit short but if you aren’t clan, this is as good as it will get.

Solo play with the standard Annihilator is a veeeery bad idea as it has the dubious honor of possessing the slowest speed of all assault mechs with exception to just 2 of its variants. Coupled with a less than stellar default armor rating, you will provide a Locust driver with a good chuckle as you are given an unwelcome prostate exam if wandering around by your lonesome. Communication with your team will be key to ensure you aren’t inadvertently left behind. Acceleration, torso speed and turn rates are identical to that of the Dire Wolf so there is even footing with other assaults. One interesting option on the 1E chassis is the redundant AMS system hard point which can literally be a life saver given the Annihilator’s sloth-like speed.

As nearly all components of the Annihilator offer modifiers to base armor, it is quite advantageous to scurry off to the mech bay to increase the armor tonnage which will allow you shrug off the inevitable punishment destined for slow lane travel. Speed can be increased to be on par with other assault class mechs by upgrading to a class 300 STD engine from the default 200 but that will add weight that has to be taken away elsewhere. Gameplay with the Annihilator will have to be more thought out to allow you to slowly maneuver into firing position without taking too much damage. Once you are engaged in a fight, you are committed as you will lack the speed to run away so you will need to be quite careful in whom you engage and travel with suitable support.

The Cougar is a light clan mech that owes a debt of gratitude to the Inner Sphere Panther for saving it from being the slowest light mech in the game. The Cougar is an odd addition, as I was scratching my head to see what benefit it adds from the other mech choices. It isn’t the fastest by far, as my beloved Locust still holds that title while I patiently wait for the release of the Firemoth. (Piranha, that is a not so subtle hint. FYI.) The weapon loadout doesn’t offer any benefit over other light mechs. In fact, other light mechs actually outpace the Cougar for hard point availability for all weapon types. All mobility stats for the Cougar are on par or lag behind the other lights mechs with exception to some of the short bus Panthers. The armor rating and component enhancement bonuses don’t do anything to put a shine on this one. I suppose if you want to challenge yourself, you can give the Cougar a go and see what you can do with it. If you excel in this mech, you are a cut above the rest!

The Mad Kat MKII is a 90 ton assault mech. As it is not a true 100 ton assault, it slightly lacks in its armor rating when compared to the Dire Wolf or Kodiak but it does possess the fastest base speed possible for an assault. Less tonnage does allow for faster acceleration, torso twist and turning when compared to 100 ton assaults. One draw to the Mad Kat MKII is the variety of weapon configuration that can be put into play. All but 2 of its variants allow for a relatively even count for ballistic, energy and missile platforms. That kind of customization will keep the other team guessing what you are bringing to the battlefield.

Overall, I don’t feel that the Mad Kat MKII has anything to offer for the clans that isn’t already provided by the Kodiak. The extra speed is nice, but it isn’t any better than the Kodiak which has a higher armor rating and far better weapon platform options. Overall, the Kodiak may not allow for a similar range of weapon type configurations in a single chassis but the KDK-4 can allow a player to use at least 2 of each. One benefit that the Mad Kat MKII has over the Kodiak is a slightly smaller profile that gives the enemy less real estate to shoot at.

The new pack includes changes to the weapons which was desperately needed to add some new flavor into the game. The Inner Sphere is playing catch up with Clan tech as they now have their own variants of the LBX and Ultra autocannons along with ER lasers, SRM streak pods and targeting computers. Other Inner Sphere additions include specialization of existing weapons by creating light and heavy classes. This will include the gauss rifle, PPC and machine gun. The general rule is that a light variant has greater range with less damage whereas heavy variants possess a shorter range with increased damage. There are also dummy missiles that fire salvos of unguided rockets. Some of the more interesting options are the snub nose PPC that serves as a kind of “medium” PPC when contrasted with the light and heavy versions. It consumes the same number of slots as the light PPC while doubling its tonnage, damage and heat. On a fast light mech, these can cause havoc. Other new items for IS tech include stealth armor that will shield the mech from all sensors so it can only be seen by direct line of sight but generates heat while in use. AMS defensive capabilities have been improved with the laser AMS that exchanges ammo for heat generation.

Clan machine guns now also have light/heavy variants while the ER and pulse lasers have been miniaturized on a scale beyond even small lasers. While weighing half as much as small lasers, damage for micro lasers are not halved so that 2 micro lasers will do more damage than a single small laser but generate more heat in the process. Heavy variants of small, medium and large lasers are now available that follow the same rule of shorter range with increased damage. Light TAG and the light active probe are similar to their original versions with the exception that they are lighter with less range. The Advanced Tactical Missile (ATM) is an interesting addition as its damage is based on 3 separate range stages to your target. Fired in the closest stage, full damage is delivered but damage drops by 1/3 for each range stage beyond that. As with the Inner Sphere, the Clan also have laser AMS.

New mechs are always fun but the focus on this release should be the tech. By enabling new weapons and supporting gear to be incorporated into the game, it changes what can be a stale experience by allowing new chassis loadout configurations. Lighter tech will allow for more robust options for the light mech classes while the heavier options will bring a new level to heavy and assault class brawling. This in turn will force new strategies and tactics to maximize the impact of this tech. I was hoping for more quick play maps for a change of scenery but it seems that for whatever reason, that is something Piranha is not interested in despite the cacophony from its player base. I am looking forward to seeing how this patch will impact gameplay going forward.