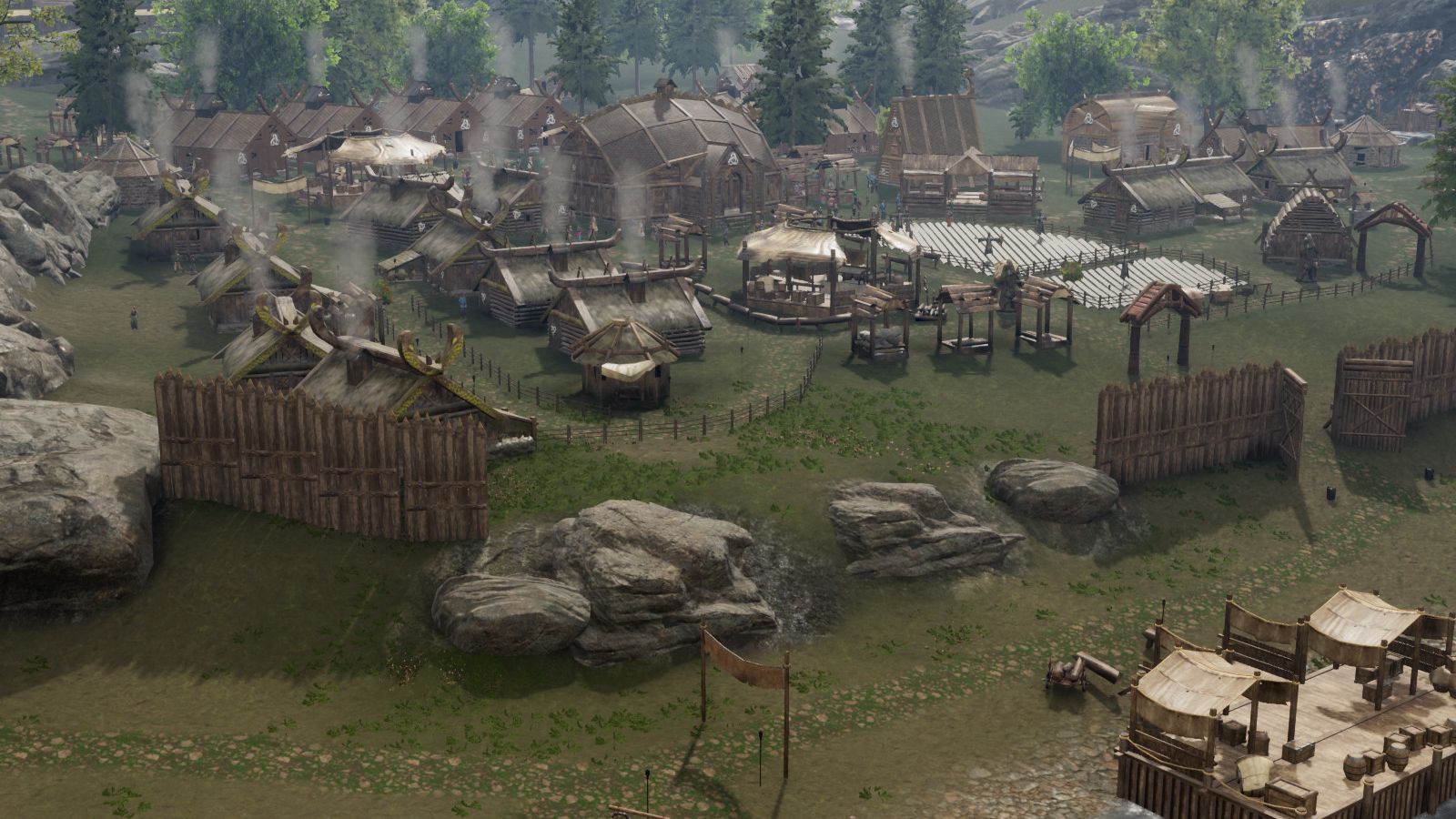 Land of the Vikings released into early access this week on November 8th, and I was thrilled to check out how far it had come since the awesome demo I played a month ago. In this Norse city builder, you are the almighty and wise Jarl charged with building, providing for, and defending your small group of Vikings. If you’re lucky, you might survive the brutal (that is no joke) winters and thrive to become a prosperous village.

While this game is a much needed breath of fresh air in the genre, I have to point out what really makes this game shine: there is no grid, so you can build everything in your village at any angle. Read that one again….NO GRIDS! It’s something one or two other games have managed to get out the door in recent years, but it makes a city building game so much more fun when there are no restrictions.

This freedom includes other aspects of the game like roads. You can curve and weave them through your city however you like. The farming system works in the same way. You don’t have to plop down a square farm, you can customize your map and fit things in as you see fit so you don’t waste any space. Trees also grow back quite quickly as long as they aren’t built over. 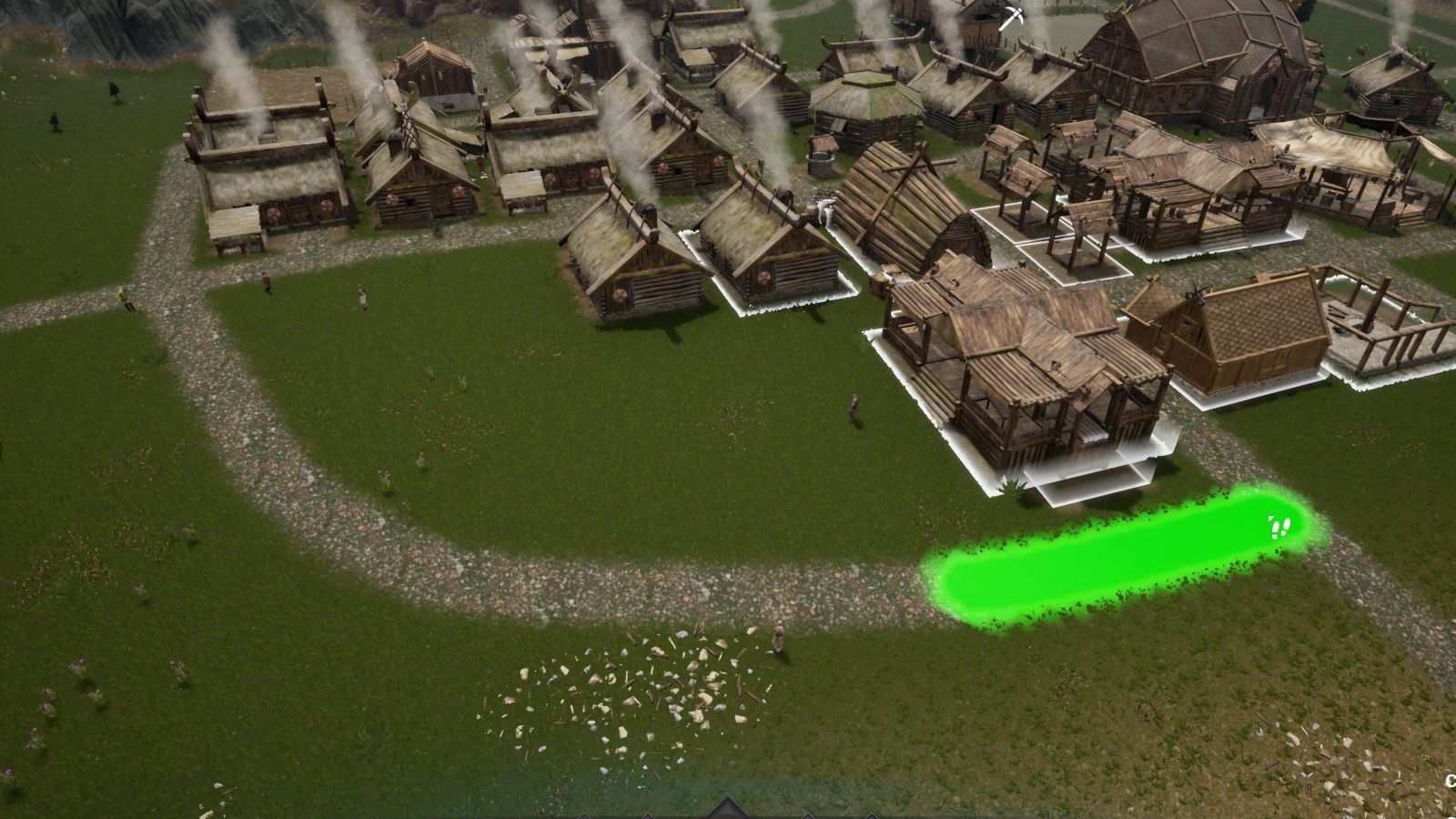 Build your roads however you see fit! Turn your buildings at any angle. It’s amazing!

Another highlight of this fantastic game is that harvesting resources is a breeze. Your mouse turns into a highlighter that you just sweep over trees or rocks which your villagers will go gather. Your hunters and gatherers will automatically retrieve their own resources if placed in the appropriate area with no intervention, as long as you pay attention to the percentage of the particular resource when placing the building. Try to get it as close to 100% as possible for maximum efficiency.

My first playthrough went horribly wrong because I didn’t understand how in-depth the Viking citizens were. Each individual has its own strengths and weaknesses, and some are clearly cut out for certain jobs more than others.

Now, I know what you’re thinking…that this sounds like a lot of micromanaging, but yet again, Land of the Vikings surprised me with how easy it is to task your Vikings with jobs. A simple click on the building will show you the skills that are most important to make the service function at full capacity, such as speed, luck, strength. Below that the game displays all the villagers who are available for work, and a simple click of the skill will filter them for you. It’s a breeze to manage, so don’t overlook it, as placing the wrong Viking in a job can have devastating effects on production.

One other thing to keep in mind, which I failed miserably at the first time, is the distance from their home to the job. Your Vikings will very quickly become tired and even sad if they have to walk too far from their house to get to work. I didn’t quite catch this the first time through, but once you understand all of it, managing your village is super easy.

You must also pay close attention to the seasons and always be preparing for winter, which is absolutely brutal. Your crops won’t grow in the winter, so you need to make sure you have enough bread made. If you grow your village too quickly, you will soon be out of much needed food. Build a woodshed early on to get logs for the fire stored up. It’s definitely a balancing act in that first year, but I found once I overcame that first winter and knew what to expect next year, it was much easier. 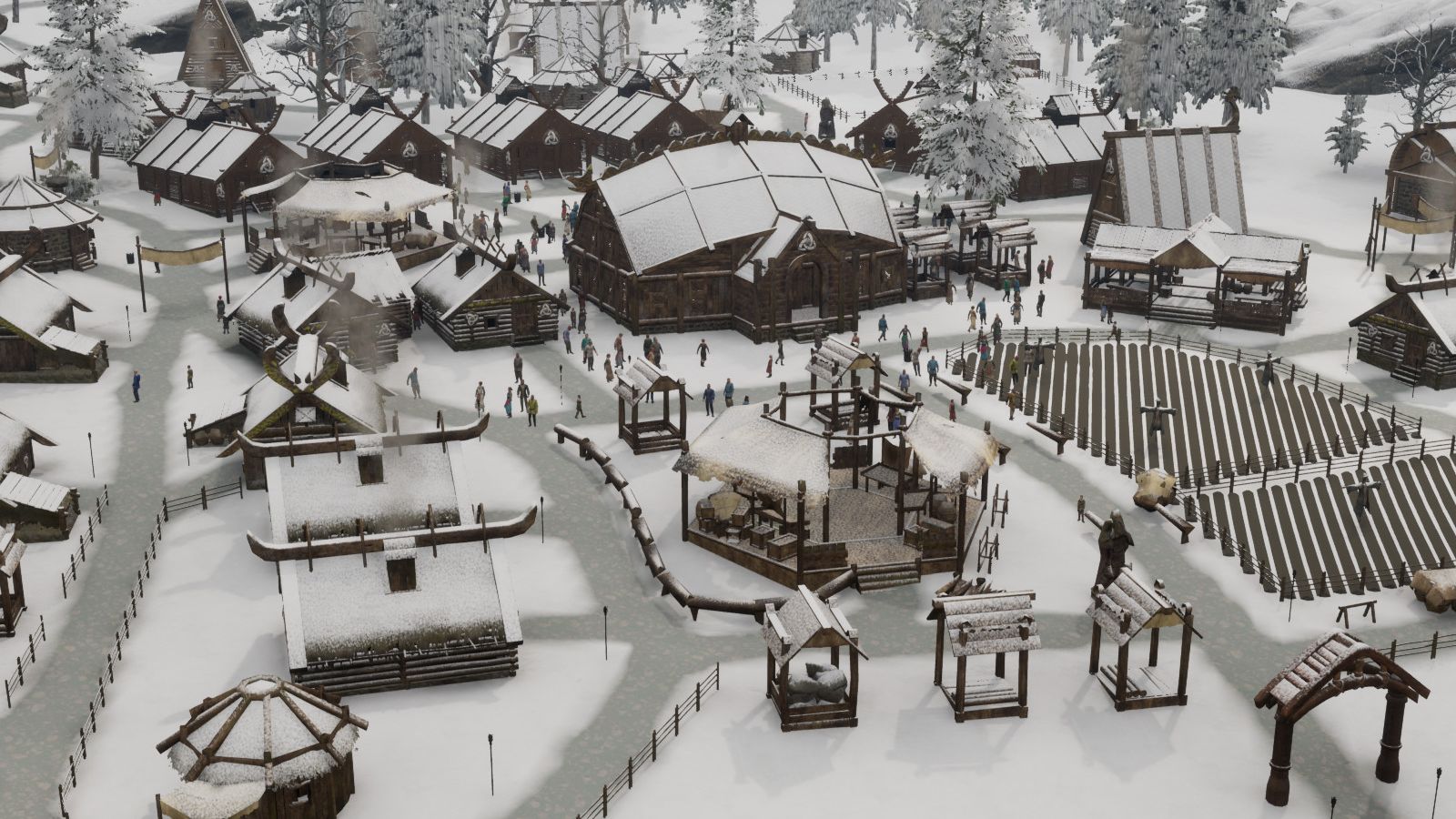 ALWAYS be planning for winter, it will kick your ass if you don’t!

A slight issue I had was with the tutorial and trying to get my feet wet in the game as there didn’t seem to be enough warning when things were dangerously close to failing. I did have a playthrough where I thought everything was going fine, and then I suddenly lost. After watching a couple of videos I realized what I did wrong, but I should not have to seek out external help to figure this out. An alert of when things are going south before a total failure would probably help new players figure out what to focus on. I think happiness was a major issue for my Vikings, and I just wasn’t paying close enough attention my first time playing. An end of game wrap up of what you did wrong (and right for that matter) would be very helpful so we could learn from our mistakes.

Now, with that said, the tutorial does a decent job of explaining your building priorities to you, but I’d suggest branching out a tad too, especially in the Tree of Life, which is Land of the Vikings skill tree. This is where you unlock new buildings and can boost the quality of life for your Vikings. Early on, taking a point or two in speeding their work up and making them happier really helps. The Tree of Life is huge, and I have only tapped into the surface of what it has to offer, but I very much look forward to unlocking exciting new things to make my little band of Vikings thrive.

Very early on you will start to see events popping up, such as a band of homeless Vikings wanting to join you, but it will require housing and food. In another scenario, someone stole something and they are blaming another Viking, so you are tasked with choosing either to exile him or make him pay a fine. Basically, these are small things that tweak your fame and villager happiness here and there, although something major may happen out of them as well. Choose wisely when taking on bands of homeless Vikings in the first few days of your game; if you don’t have enough food or lodging for them, you will lose the entire game. Not that I would know anything about that… 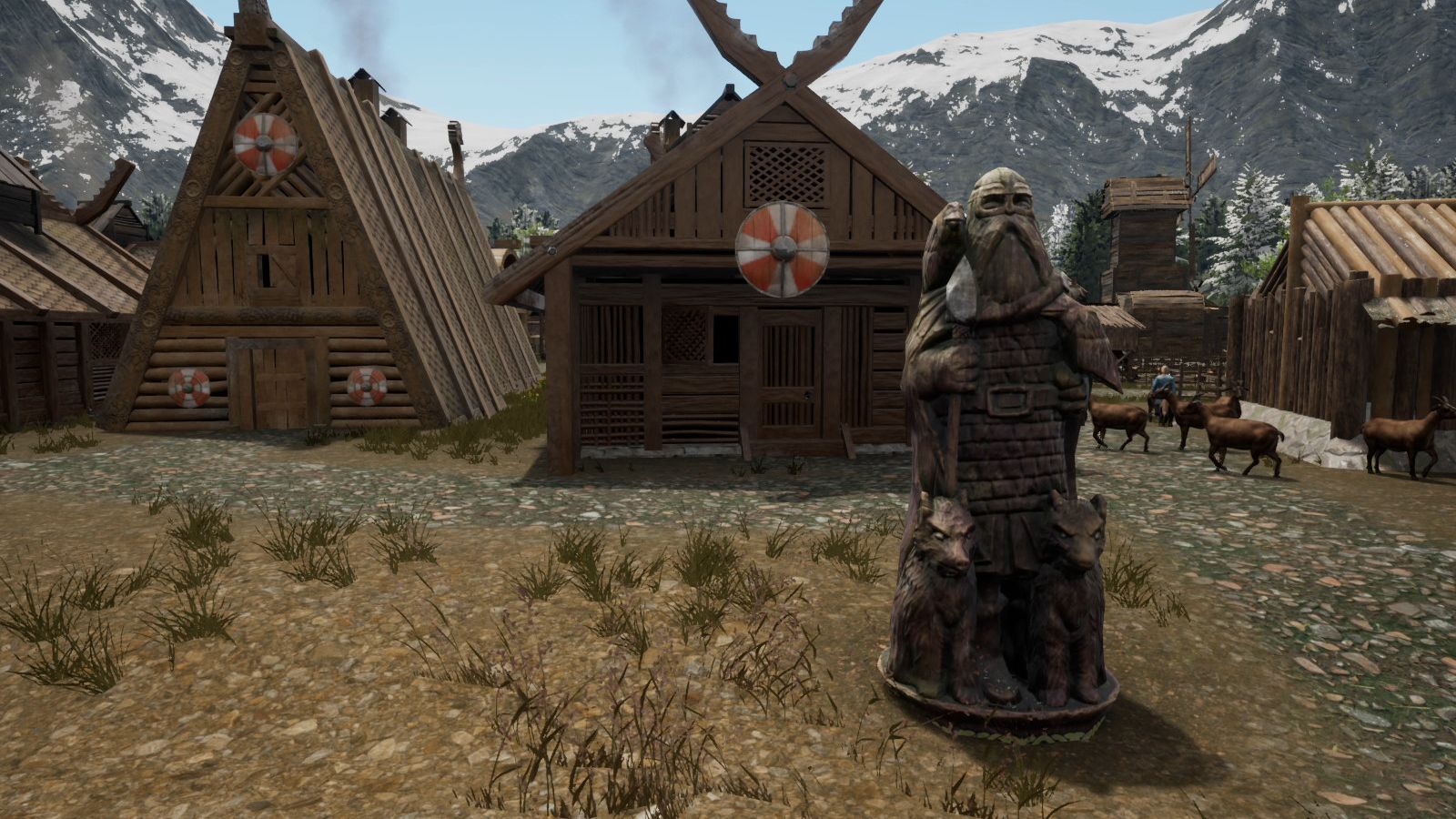 The attention to detail is just stunning. Be sure to zoom in close on your village and villagers.

Keeping your Vikings happy is always a priority. Building roads for them to get to their jobs, and even to the stone and trees helps to achieve this. I like that decorations serve a purpose here, such as a scarecrow in a crop field yielding more harvest, or placing carts around the town speeds up villagers. Putting certain crates or storage containers increases how much your warehouses can hold. Most of these items increase village happiness while also serving a secondary purpose.

In my final few minutes of playing this evening, I encountered a savage thunderstorm, complete with devastating lightning. This literally destroyed about 60% of my housing, and a handful of production buildings. Thor was unhappy with me apparently, and I had several options on how to proceed presented before me. My strong Vikings overcame this tragedy and we rebuilt stronger than ever. 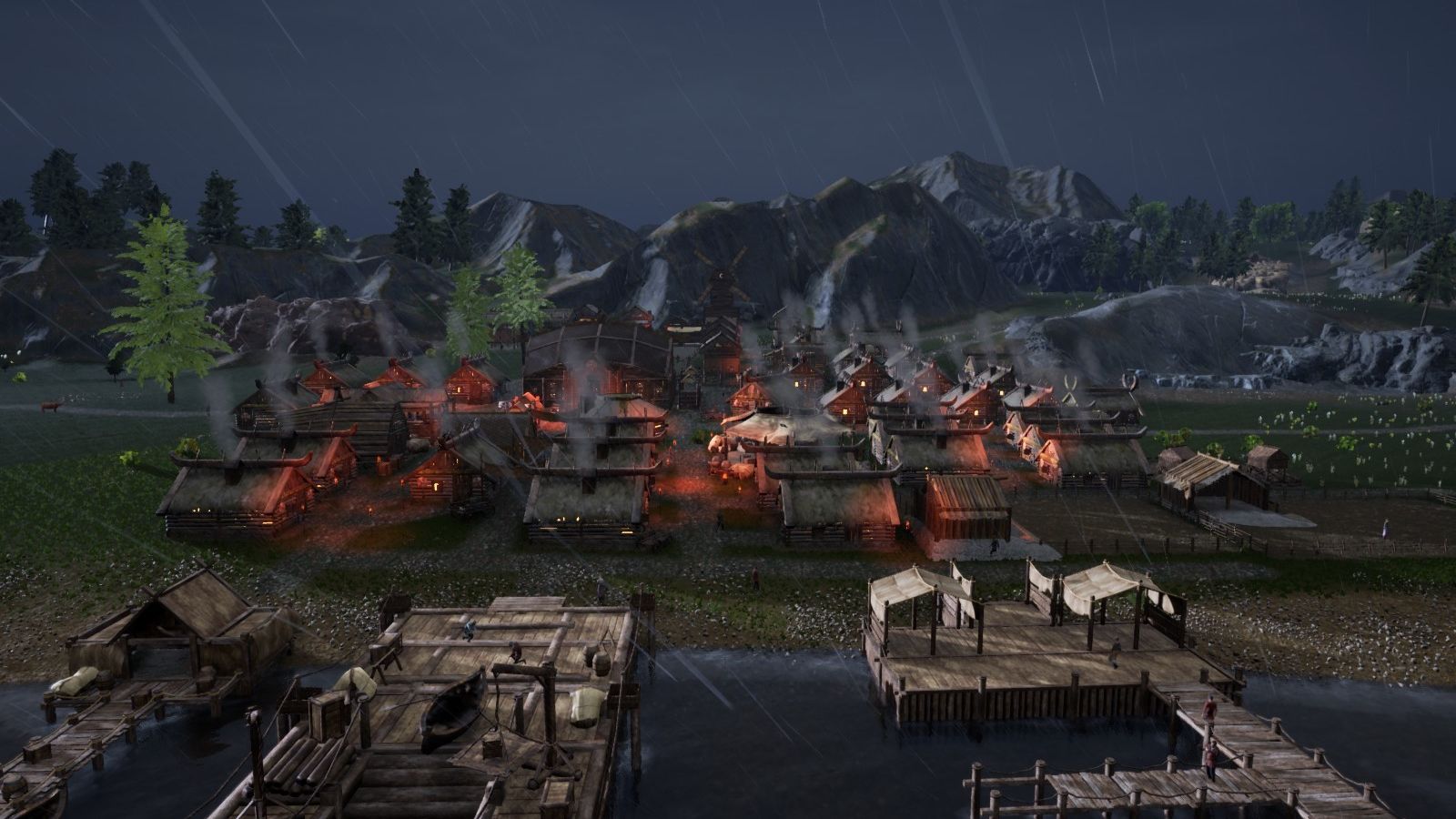 Things may be peaceful for a time, but beware not to anger the Gods!

One last thing to touch on is how peaceful and beautiful this game is. If you zoom in close on your villagers and the buildings, there is a remarkable amount of detail. I often talk about the game Pharaoh from back in the 90s in my reviews, it’s still one of my favorite games of all time, and it was because of the reasons mentioned above that it really stood out to me. It felt real, like each villager had their own life and daily business, and you could watch them do it. Land of the Vikings is the same, from watching the butcher in the chicken coop preparing chickens to be sent to the market, to watching the carpenter shape logs, it just feels so real and full of life. The attention to detail is astounding and very much appreciated by this old time gamer.

I am very impressed with Land of the Vikings so far, and can’t wait to see how this game develops. You can find it on Steam for -10% off until November 18th for $17.99 USD.