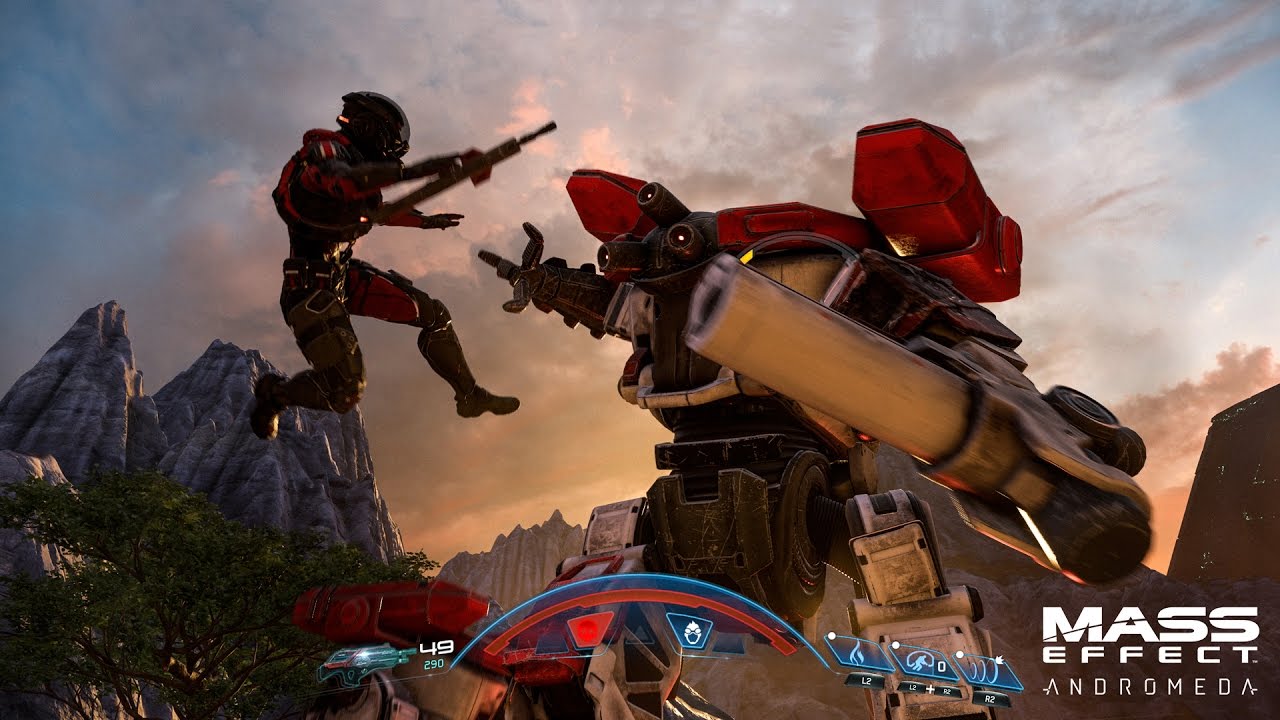 While Mass Effect has dabbled in online multiplayer before, the series is known to most for its story-based single player mode. Because of this, it’s a little strange that the PAX demo I played just showcases the multiplayer. In spite of some expectations, however, the team-based cooperative multiplayer of Mass Effect Andromeda is a lot of fun with a surprising amount of variety when it comes to enemies and objectives.

The demo booth had four different Xbox One consoles, each of which had one of the four classes and races from the series. I ended up playing as the Krogan Vanguard, a hefty, tank sort of class with a kit based around getting up-close and personal, with a charge that teleports you to far away enemies, an area-effect burst, and a mighty headbutt. This moveset was a lot of fun, and I got the gist of it almost immediately. Other classes included an Asari sentinel, which seemed to be a support class, and two humans, an adept and a soldier.

While I had to choose from four characters, there will be more in the future. That said, I’ll probably keep playing Krogans.

The gameplay of Andromeda is surprisingly fast-paced, with an emphasis on vertical height. Each character, even my weighty, slower Krogan, could leap about a story into the air, which is really handy when enemies are firing at you from all three levels of the map. Other than that, combat is fun, if missing a little punch. Enemies didn’t seem to react to standard gunshots, instead just standing in place under fire until their health bars ran out and they crumpled to the ground. The lack of enemy reaction, along with the fact that I couldn’t really hear the gunfire over the ever present drone of the crowded convention hall, meant that a lot of the fighting lacked impact.

Despite this, the enemies are greatly varied and make great use of the Mass Effect universe’s assortment of interesting foes. Salarians, Krogans, humans, and other alien baddies all made an appearance, each with their own unique AI behavior and skillset. The Salarians, for example, tended to sneak around, taking potshots at me and my team from behind cover, while the local alien fauna, which looked like a sort of giant lizard, had a tendency to climb up walls and corner us.

The team-based structure of the missions is a lot of fun, even with complete strangers at a convention.

Structurally, Andromeda’s cooperative multiplayer takes on a wave-based structure with a few occasional changes in gameplay. While most waves were a simple “kill all the baddies” horde mode, different challenges popped up in between, such as controlling certain areas of the map or searching the abandoned structures nearby for items. It’s the little things that make the rounds feel less like a deathmatch and more like an organized mission, with multiple objectives that need to be completed in a timely manner. Overall, there wasn’t a huge amount of variety in the objectives, but they forced me to explore the entire map, a three level outpost on a rocky cliffside.

By the end of my time with the fairly lengthy 20 minute session, I was having fun and laughing along with my team. We argued over the best way forward, congratulated each other on kills and yelled for help whenever one of us was downed. The final wave in particular was the moment that really sold me on the potential of Andromeda’s multiplayer. While we waited for the evac ship, with less than thirty seconds on the clock, the enemies had the entire team pinned down. The entire final encounter felt like the climax of a movie, as my teammates were quickly overwhelmed by the increasing firepower. My Krogan, the lone survivor, just had to reach them to revive them with just second lefts and little ammo, but, sadly, fell with two seconds left in the game, marking the end of a failed, but still incredibly fun, mission.