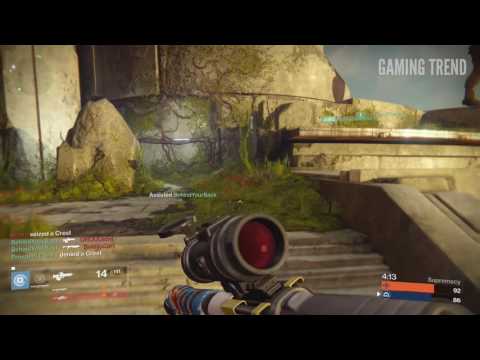 September marks the start of the third year for Bungie’s popular shared-world shooter, Destiny, and the upcoming expansion, Rise of Iron, will serve as its vanguard. With the spotty first year behind them, and in the wake of a very successful second year, Bungie is setting out to give Destiny a proper farewell, before the all-but-confirmed sequel next year. I had the opportunity to play a bit of Rise of Iron’s PvE content, and a whole lot of PvP; here’s what I can share:

Rise of Iron is all about the Fallen, and their new-found powers.

Rise of Iron pits players against an all-new threat called SIVA, a Golden Age technology that was sealed away to keep it out of the wrong hands…but the Fallen have many, many hands, and they’ve uncovered its power. By working with an NPC who has been around since the beta, Lord Saladin, players will explore the mysterious Plaguelands, fight off the Fallen, and reclaim a new social area that was once a stronghold for the Guardians.

What is SIVA? Well, we don’t know much, except that SIVA was supposed to be a nanotechnology, but it didn’t work out so well, and the Iron Lords thought it best to seal it away. We also know that it’s spreading like a virus, and is the very  same plague that gives the Plaguelands its name. Furthermore, the Fallen are controlling this technology, and augmenting themselves and others to create enemies that can do all kinds of messed up shit.

According to Steve Cotton, one of the lead designers for Rise of Iron, “the focus was all about providing more content,” and in terms of PvE content, there is quite a bit to be found. Rise of Iron features an all-new story mode, three strikes (one original strike, and two that are remixes of existing strikes), and, most importantly, a raid.

The new strike is called “The Wretched Eye,” which you can watch me play here. The first thing that players might notice is that Destiny is more beautiful than ever, most likely due to the fact that Bungie no longer has to build their game to support the Xbox 360 and PS3 versions of the game. Snow blows fiercely, fire crackles, sending embers into the air, and the world feels more detailed than ever before.

“The Wretched Eye”‘follows a similar formula as the rest of the Destiny strikes, but has the unique trait of changing slightly each time you play it. some Of the objectives appear in different areas, and enemies spawn in different locations as well. It’s a small change, to be sure, but one that should make replaying strikes less dull.

Rise of Iron has new maps, and an all-new game mode called “Supremacy.”

Rise of Iron has four new maps for PS4 players, and three for Xbox One users. I had the opportunity to play on two of them (Icarus and Floating Gardens), and you can watch me get my ass kicked by some Destiny all-stars here. The new maps that I saw are some of the best to appear in Destiny so far, with intricate layouts, chaotic choke points, and plenty of delicious verticality.

The new multiplayer mode is called Supremacy, and is reminiscent of game modes like Call of Duty’s “Kill Confirmed” mode. In Supremacy, players not only have to kill the other team, but also collect a “crest” from the fallen enemy’s corpse. If they don’t get the crest, they don’t get credit for the kill. To complicate matters, the enemy team can pick up their allies’ crests before you do, denying your team the point.

I found Supremacy to be a breath of fresh air for Destiny PvP, even if I wasn’t particularly good at it. Since simply killing the enemy can very likely not earn points, teamwork is absolutely necessary. It also completely invalidates the idea of “trading” kills with the enemy, since nobody remains to collect the crests if people are going playing like lone wolves.

Oh, and Bungie has confirmed that Supremacy will be the chosen game mode for the first Iron Banner event post-launch. Start honing your skills, people!

This does not mean that players will be able to design custom game modes, however, and Bungie did not comment on whether or not that would be coming down the line. Bungie has been a big proponent of custom game types in the past though, with games like Halo, and private matches is an important first step in the right direction.

Artifacts will change your world.

Rise of Iron has eight new artifacts with incredible special abilities that are absolutely game changers. One artifact allows the player to see enemy characters through walls in PvP when they’re low health, or have their supers charged up, while another gives the player a more detailed radar, even when they’re looking down the scope of a primary weapon.

Whereas The Taken King’s artifacts were more-or-less just another armor slot, the role of artifacts in Rise of Iron is exciting, and invaluable to the player. All eight of the super-powered artifacts are obtainable via questlines as well, which means players will have plenty of loot to meticulously hoard.

The Festival of the Lost, and sparrow racing are coming back.

The second year of Destiny featured several seasonal events, and Bungie confirmed that these will be returning in year three. Bungie also alluded to some new events, but stubbornly refused to give me further details despite my repeated attempts to bribe them.

Gjallarhorn is every bit as glorious as you remember it.

Gjallarhorn makes its triumphant return in Rise of Iron, and I was lucky enough to use this weapon at length in PvE and PvP during my time with the expansion. I could go into detail about how the weapon works mechanically, and perhaps give some helpful insight to our readers, but instead I’d like to offer the following GIFs to express my thoughts:

Rise of Iron is available on the Xbox One, and PS4 on September 20th, and all those who pre-order will receive the Iron Gjallarhorn, and the Iron Gjallarwing sparrow. Until then, you can keep up with all of your Destiny news on Gaming Trend, and keep an eye out for our review!