One of the first games we had the fortune of previewing at Gen Con this year was Kapow! Published by Wise Wizard Games, Kapow is a zingy, modular, asymmetric, 1v1 dice slinging duel. Two players sit opposite each other divided by huge player screens. After rolling their dice, they assign them to a plethora of action slots on their playerboard before revealing. Players resolve their chosen actions which include attacking, defending, and powering up. The first player to knock their opponent’s health down to zero wins!

Each die has a multitude of symbols which are used for assigning dice to actions. Some actions require die to have certain symbols on top. Kapow also has what it calls ‘action dice,’ which start with 6 blank sides. Throughout the game, players obtain action dice and die faces to press into them. Crafting action dice this way can be crucial to Kapow’s strategy! 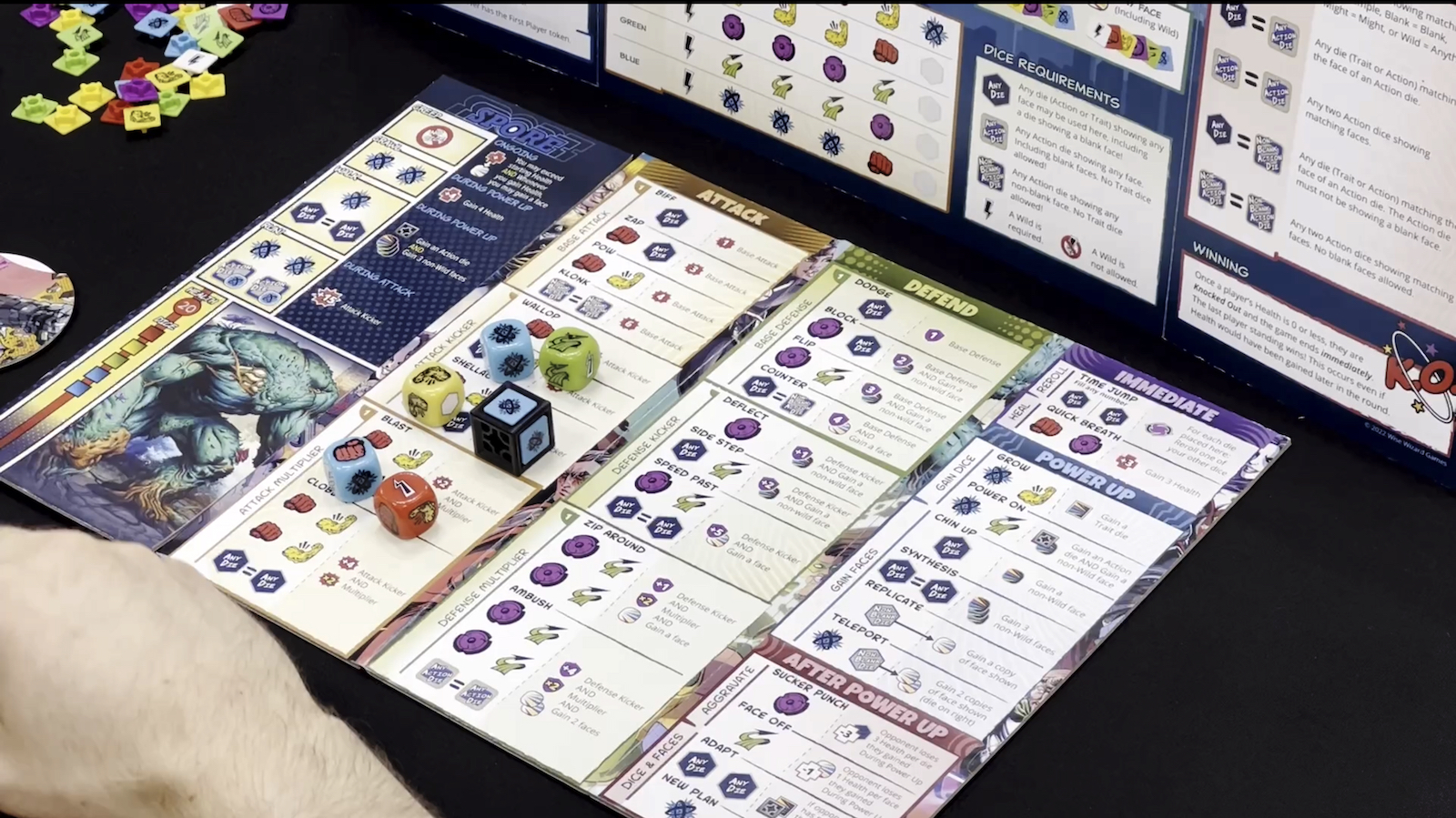 A player’s turn reads through three phases: attack, defend, and power up. Attacks consist of base attacks, kickers which add to base attack values, and multipliers. Yes, kickers apply before multipliers. Defends reduce incoming damage and some grant nice small bonuses like collecting die faces. Power ups give new dice, die faces, heals, or re-rolls. Additionally, each player selects a unique character at the start of each game and adds their tile to the left of the player board. Each character starts with a unique hand of dice and arsenal of unique abilities!

While sneaking a peek at some folks playing the demo I noticed one of them won with a particularly powerful, but hard to pull off, attack. So, being the creative original that I am, I copied the victor’s strategy during my demo. Right out the gate I gunned for action dice and filled them with as many die faces as I could grab in hopes of using my super special super attack as soon as possible. This particular attack required I have two action dice with a blue die face, and two regular dice with blue faces. Thanks to a bit of luck, I managed to pull off this attack by the fourth turn for an insanely quick win! Kapow! I certainly had a blast.

Speaking of blasts, Wize Wizard has one explosive deal right during Gen Con only. Kapow and Robot Quest Arena are currently only available through pre-order and, during Gen Con only, pre-orders for Kapow are 28% off and pre-orders for Robot Quest Arena are 25% off! And, free shipping is included! Both games are currently in the factory and will be released next spring! If you don’t want to miss out on this generous deal, pre-order from Wise Wizard now!