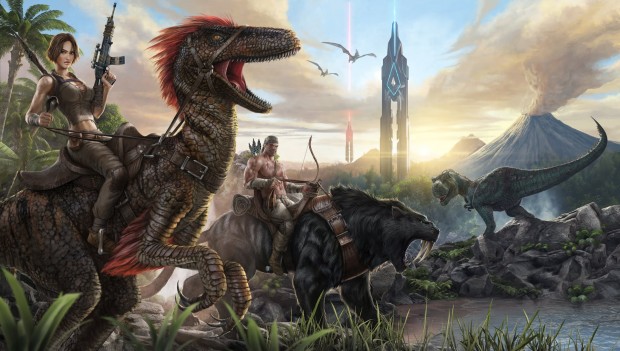 Games with dinosaurs can often be a difficult thing to develop. With some dinosaurs that tower over a human player, finding game mechanics that feel balanced can be hard to achieve. After all, when a T-Rex needs to be tamed due to its potential to end a fight in a single bite, how does a developer still make the fight interesting without completely taming the reptile? Sometimes the best solution is just to embrace a more unrealistic approach and let gamers create their own dinosaur adventures, even if they’re not entirely action-heavy at times.

This is exactly what Ark: Survival Evolved feels like. An open-world online dinosaur survival game, Ark feels more like a prehistoric sandbox rather than a serious affair. The overall tone comes across as a much more social experience where players opt for the adventures they create themselves rather than scripted sequences that drive gameplay. After a brief hands-on demo at E3, I can say that the game definitely feels unique and creates an atmosphere for some seriously entertaining online interactions.

My session was played on Xbox One where I was dropped into the game as a level one hero. Upon scoping out the nearby scenery on the game’s island, the first thing I noticed was just how huge the world of Ark is. Various forests, mountains, beaches and lakes were spread out in every direction, some of which were quite far away, but still within reach. Pterodactyls dotted the skies in the distance, likely searching for their next meal. Several smaller creatures were hiding behind rocks nearby, potentially enticing me to learn the basics of combat. With the potential for some sort of activity in every direction, this really is a game where players are encouraged to visit and explore wherever they desire.

This element of discovery drives Ark’s multiplayer sessions. Sadly, because I was playing on the E3 show floor, this demo was not online-enabled and so I was the only player roaming this massive island. It unfortunately felt rather lonely, especially given how empty some of the territory feels when there aren’t dozens of other players nearby. With up to 70 players online at once (at least on PC), this loneliness will likely be nonexistent in the final game, but for now I was only able to explore the potential that Ark has for multiplayer parties.

Starting out the adventure with little in terms of supplies, my first priority became gathering items to defend myself. Opening up my inventory showed that a hatchet weapon was craftable once I had gathered some flint and rocks. I walked over to a nearby bed of stones, where I found the small rock ingredients I needed, but still required flint. All this required was some slicing away at a giant boulder using my small knife and the flint had been acquired. I quickly returned to my crafting menu and with just a few selections the hatchet had become mine. The crafting was relatively simple and it’s great to know that lower-level supplies are usually right nearby for some quick crafting. Now armed with a slightly larger weapon, I continued to press forward into the forest.

My quest soon took me to an area that featured several lower-level Dodo bird-like creatures. I decided to take this opportunity to get the hang of combat. Items can be equipped to each hand, and much like Skyrim, a simple pull of the left or right trigger will use the weapon in that hand. The Dodos themselves were admittedly only fodder to my attacks, but they were enough to provide me with a quick introduction to combat before my next encounter: a dilophosaurus. Taking more inspiration from Jurassic Park’s entertaining interpretation rather than from scientific accuracy, Ark’s dilophosaurus featured a neck frill and the ability to spit poison at players. Sadly, the AI in this demo still seemed to need some work, as the dilophosaurus barely moved, let alone attacked, allowing me to quickly dispatch the dino. My encounter was unfortunately only a short one, but seeing the dilophosaurus was exciting nonetheless and left me hoping for more refined sightings in the game’s full release.

Perhaps the most exciting aspect of Ark came from my next discovery: riding on dinosaurs. After finding a group of dinos that the previous player had already tamed, it was just a quick press of a button to hop of the reptile’s back. (It should be noted that while I was immediately able to ride them, taming Ark’s dinosaurs won’t always be so easy, requiring attributes to be at a high enough level before hopping on.) My choice of mount was a brontosaurus, whose long neck towered high into the trees. After getting the hang of the controls, there’s definitely a powerful feeling to riding such a huge dinosaur. This is admittedly a much slower dino, but there’s definitely excitement in watching trees fall with your movement, while the ground shakes (and controller vibrates) with each step you take.

There was one glaring issue I had while playing Ark, though, and that is that quests were not particularly clear. Ark’s missions come from giant floating obelisks that are visible in the distance, and while they are pretty much always within sight, they are few and far between, often requiring significant travel time to reach. Arriving at the nearest obelisk told me that I still needed to acquire certain items before taking on this quest anyway, so my journey remained fruitless. With such a large open world to explore, Ark just feels empty and in need to some clearer goals. There is nothing wrong with encouraging discovery, I just wish that there were occasionally a clear path to show me what I should be doing.

Still, Ark has the potential for some awesome moments between friends. The brief E3 demo only gave a glimpse into Ark’s vision, but what I saw provided the tools to create some entertaining moments when teaming up with friends online. At the moment the goals may seem to be too vague, and there some aspects that still need some tweaking, but Ark shows strong potential to be a unique sandbox in its final release.

Ark: Survival Evolved is currently available on Steam Early Access. The finished game is scheduled for a June 2016 release on PC, PS4 and Xbox One. For more on Ark, as well as the rest of our E3 coverage, be sure to check back to Gaming Trend.