I really didn’t know what I was getting into with Phantom: Covert Ops. I’m pretty horrible when it comes to playing stealth games, but I’m also pretty bad at shooters… until you put them in VR. Phantom: Covert Ops is one of the strangest concepts I’ve ever heard of, and it’s even more strange to think that the concept, think Metal Gear Solid but played entirely from inside a kayak, is actually rooted in reality. Bursting with curiosity, I strapped on my headset and settled into my virtual kayak to see what kind of an adventure I was in for.

Phantom: Covert Ops is set during 1991, and while the cold war is over, a group of military extremists refuses to lay down arms. Missiles are poised to obliterate life as we know it, and you, as a member of special ops, have been charged with infiltrating the enemy base and ensuring the continued habitability of the planet. The bad guys are well fortified inside a waterlogged area, and the only way in is… by kayak. It sounds crazy, but apparently there are, indeed, individuals within special forces who are specially trained in all sorts of aquatic travel, including kayaking. 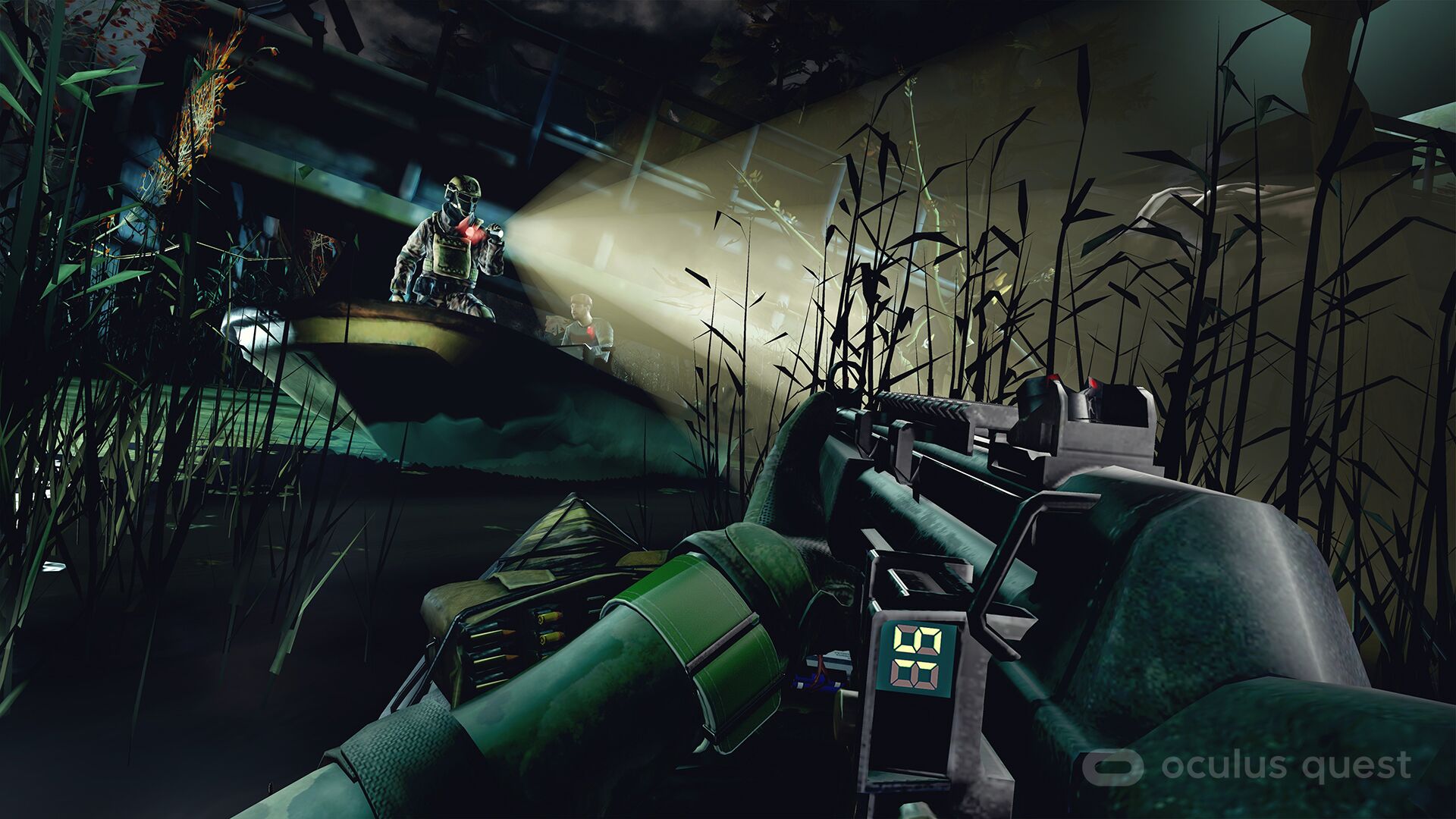 You head in heavily armed, a pistol at your chest, a machine gun strapped to your back, and my personal favorite, a sniper rifle, mounted on the right of your kayak. Oh–and you’ve got some C4 on board. Just in case. Everything is pretty intuitive, you grab your paddle off the left side of your kayak, and it will conveniently snap back into place, should you drop it suddenly. You squeeze the grip buttons to hold things and pull the trigger to fire. All your guns have sights on them, and I found the sniper rifles to be especially good. I became the headshot queen, and managed to clear the demo using almost exclusively that weapon without running out of ammo.

Completing your mission will require a combination of stealth and deadly force. Avoiding distant spotlights, hiding in reeds, destroying search lights, creating distractions, and taking out lookouts before they spot you are all equally important. If your path is blocked, well, it just might be time to whip out that C4. The fate of the world is at stake, so you can’t let a little thing like some inconvenient rubble slow you down. 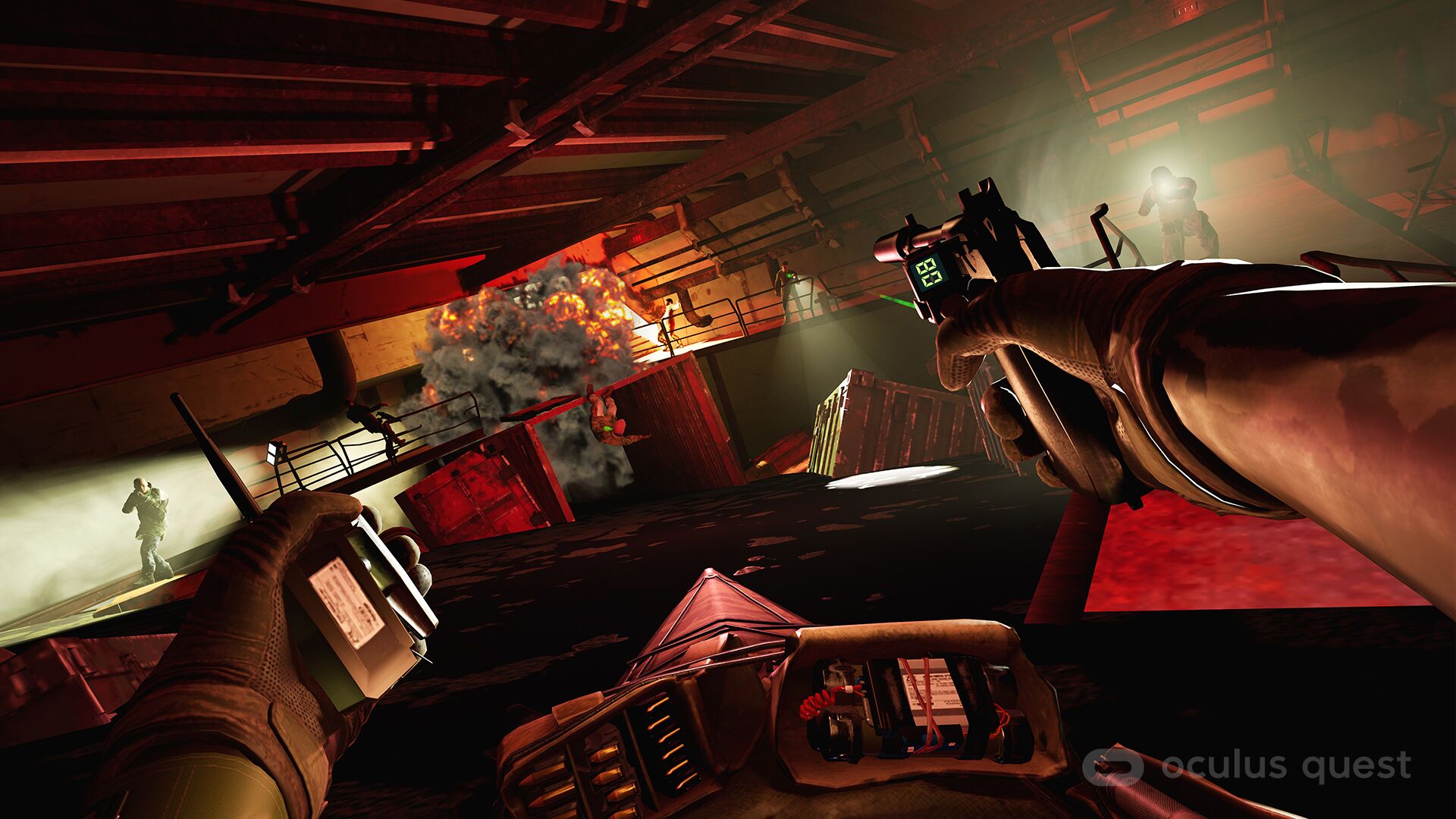 While the controls are pretty simple and intuitive, the kayak does have realistic physics, and it did take me a bit to get the hang of certain things like making sharp turns and reversing my kayak, especially while under pressure. I only got one playthrough of the demo level, but it was easy to start imagining different, creative ways to navigate the area, from throwing ammo clips to create a distraction to winging a guy off to the right and cause him to raise the alarm in his direction as you frantically paddle away to the left.

Phantom: Covert Ops will be coming to both the Oculus Quest and the Oculus Rift in 2019. Check out the trailer above and the nDreams website to learn more, and be sure to check out our E3 coverage for more hands-on gameplay and interviews from the convention floor.