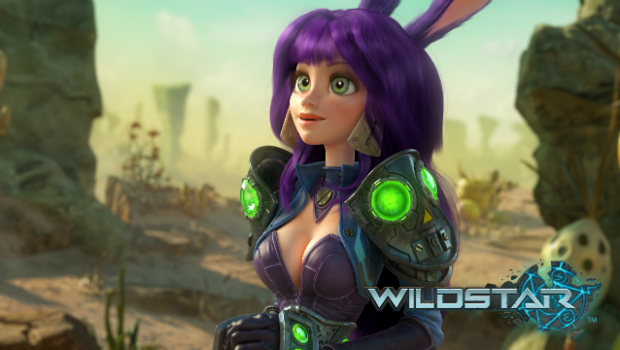 Rebellious outcasts, exiled from their home planets, set to the stars on ancient warships in search of a new home and base of operations.  Hot on their trail is a demonic alliance of warring aliens, equipped with intergalactic death machines.  If it sounds familiar, then you’ve probably watched, read, or played anything science fiction made in the last 200 years.  WildStar, a new MMORPG from NCSoft, is set in this cliche universe.  While this may raise red flags regarding the story of WildStar, the character and world design make a far more positive first impression.

Players can choose to fight for the Exile or the Dominion Faction, each consisting of four unique races.  On the exiled side, humans are more or less jack-of-all-trades in true “human” fashion.  The Aurin are a race of forest dwelling rogues.  The Granok are a race of rock men who make great warriors.  Lastly, the Mordesh are a spell-casting, scientifically advanced race of alien who have strange mechanical body modifications.

If dominance is more your style, you can fight for the Dominion, consisting of four other races.  The Cassians are an alternate version of humans, one of more substantial wealth and status than the exiled humans.  The Draken are a demonic-style warrior race.  The Mechari are a mechanical race of engineers and scientists.  Dominion’s final race, the Chua, is a genderless beast race that best resemble guinea pigs best known for their intensely inventive minds.

While the names and descriptions of the races are not very inventive, the design of each is impressively unique and detailed.  In addition, each race can be modified in great detail, making character creation a very wide open and interesting endeavor.  WildStar provides the player with not only a decent quantity of options for character design, but each option is high in quality as well.  The facial construction settings work well, and the auxiliary options, such as hair style, color, and facial accessories are all varied and look great.

The graphics in WildStar are very sharp and full of detail.  The worlds are well populated with static items, most of which can be interacted with in some way.  Nothing is too repetitive, at least in the beginning.  The camera is hard to control, forcing you to hold the left mouse button down to look around, rather than just freely moving with the movements of the mouse.  It’s a complete hassle to remember to hold the button down to move the camera, and it wastes a button that could be used for a number of other things, such as activating items or using weapons.  The other controls aren’t so bad.  Using and activating items is easy to learn.  A simple marker system leads you to your next objectives.  While movement controls have a bit of an adjustment period, and clearly aren’t what you’d expect out of a brand new franchise, they work well enough. Perhaps ArenaNet and Carbine Studios will refine this post-launch.

The biggest surprise of WildStar is that the game seems to focus heavily on the minutia rather than the big picture.  For a game with very little press or hype, the cutscenes and voice-overs are of a very high quality,  with well written lines and nice camera angles and action shots.  The world is populated with dynamic scenery and items that add a ton of life to your surroundings.  That is in direct contrast with the trope-filled storyline and lazy writing in regard to character styles.  There is a certain ambition to WildStar that offers hope for what the game will be like going forward, but also a cloud of doubt as to whether or not it can stand up to the giants of the genre.