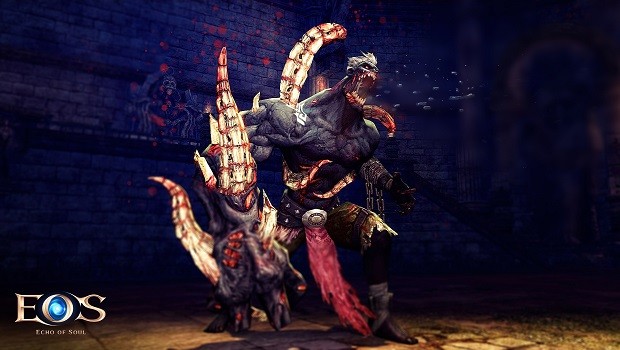 Echo of Soul is a hit MMO in South Korea and developer Nvius, along with publisher Aeria Games, is hoping it will catch on in North America and Europe as well when it launches this May. If you’ve played an MMO before, like World of Warcraft or The Elder Scrolls Online, you’ll know what to expect in Echo of Soul. You’re probably wondering whether the game will require a subscription fee or not; the answer is that the game will be free-to-play, but certainly you can spend real money on the likes of costumes, mounts, and XP boosts. The developer has assured me that anything that can be purchased in the game can be earned by working towards it in-game, and ultimately I gather that this is not a pay-to-win, but rather a “pay for convenience and cosmetics” arrangement.

The game features three primary modes of play: questing, dungeons, and player-vs-player (PVP), all of which you can level up by doing. The quests themselves are where the bulk of the storyline will be served, but the dungeons and PVP battles are where a true test of skill will come into play. PVP is said to be the focus of the game, with options ranging from 1 on 1 to 15 on 15 battles. There will also be arenas where smaller groups of five can compete against each other and gain rank.

Being in a guild means you’ll have people to team up with in dungeon raids and the like, but it also means you’ll get to contend with other guilds in full-on guild vs guild battles. This guild combat will take place in a separate instanced battlefield, but there’s nothing stopping you from duking it out in the open world. Or, if you’re friendly with a particular group, you can work together to take down world bosses. This is easily one of the coolest features of this MMO, one I’ve not seen pulled off well in other games of this type.

There are five classes you can choose from and each has unique specializations. Interestingly, there is no healer class. Instead, each player can carry healing potions and healing scrolls and take up the duty of healing when needed. Positioning, timing, and awareness is important in combat – enemies will deal various types of damage and the player will need to know when to dodge, when to cancel, and when to attack. Bosses wield unique tactics so it will be important to concoct a strategy. From what I saw during the demo, combat is much closer to a fighting or action game than most other MMOs, with the action being very fast paced.

Gear will come in various styles and specs which will cater to different play styles. Although much gear will come from questing, dungeons, and PVP, Echo of Soul provides professions and a crafting system that will give you additional ways of filling your inventory with the likes of gear and consumables.

Getting around is a big part of what makes an MMO an MMO. When traversing such large maps, you want to do so both quickly and in style. Flying is not going to be an option, sadly, but mounts will still allow you to move quickly and avoid aggro. Additionally, you’ll be able to collect pets which will carry your inventory and loot corpses for you. I forgot to ask whether or not you could send your pet off to sell your loot to vendors, a la Torchlight.

Immediately upon seeing the game you’ll recognize how beautiful it is. The world itself has been lovingly crafted with environments that not only look good but are unusual and abstract in creative ways. My favorite environments from the few I’ve seen so far are an entire continent under the ocean and a dream world filled with strange objects like cranial nerves and puzzle blocks made of brain tissue. On the more traditional side, there are still caves and forests and the like, as well as meticulously crafted, sprawling metropolitan towns. The game is being fashioned to scale on a large range of PCs, so you won’t be seeing extremely high-res textures or cutting edge lighting and shadow effects, but the look of the game is still spectacular.

The character models are boring relative to the rest of the game. Unlike some MMOs where you have a host of distinct races to choose from, Echo of Soul offers you plain Jane humanoids. There’s the dude with the white spiky hair, the girl with the green hair and ponytails, and… you get the point. I’m hoping that the gear sets look so good that it overshadows the homogenous character design. On the other hand, enemy design is excellent, especially the bosses which are right out of the Final Fantasy playbook.

Echo of Soul seems like a promising new MMO that fans of the genre should definitely keep an eye on. They’re being smart by not bothering to go up against World of Warcraft with a subscription fee model while also not undermining dedicated players by allowing you to buy your way to the top. It looks good, plays fast, and basically offers you all the features you would expect from a modern MMO. I look forward to playing the game when it releases this May.