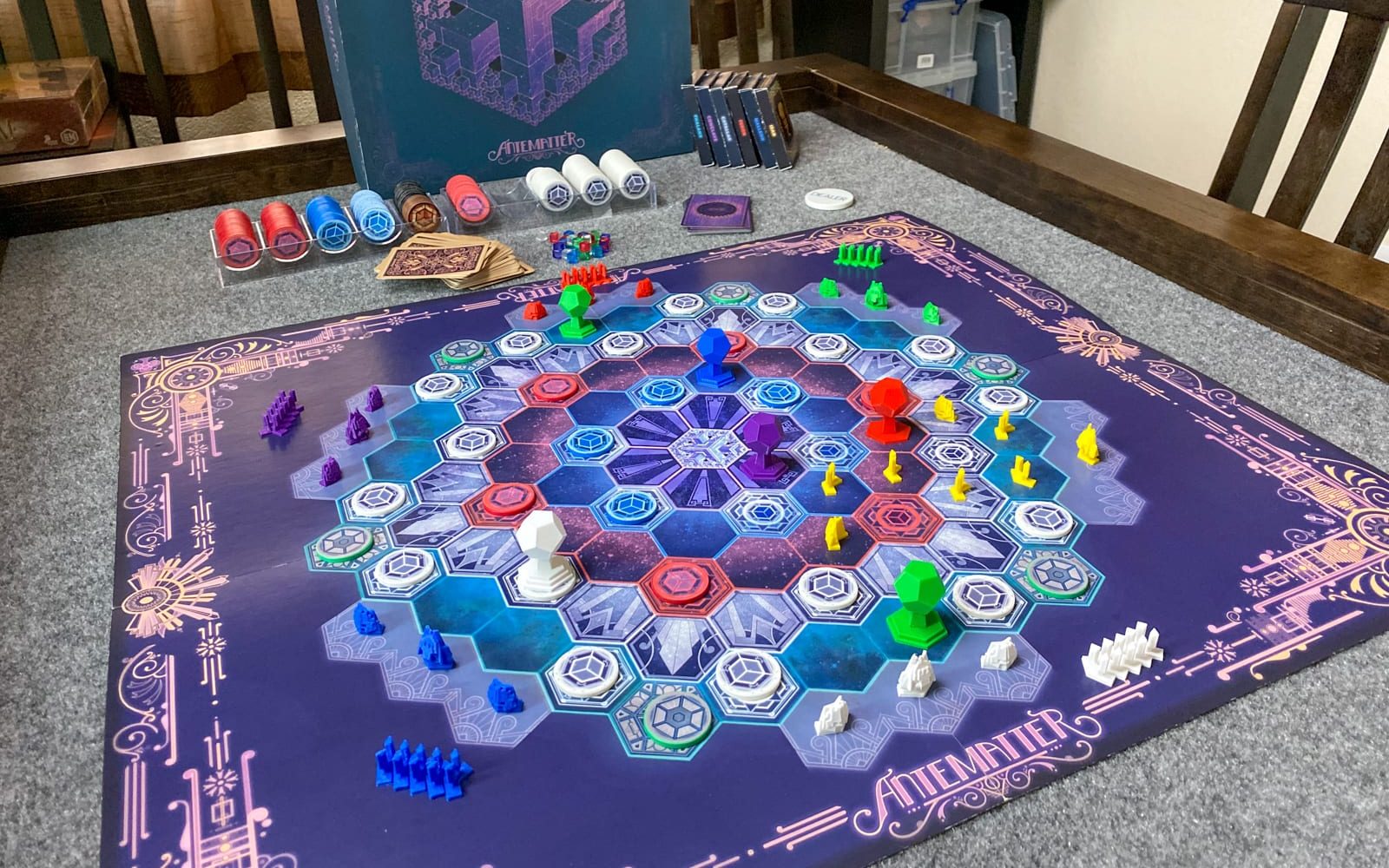 In space, no one can hear you fold—Antematter preview

There is a long-standing tradition in Sci-Fi movies and television that where there are scoundrels or smugglers, there are cards and there is gambling. Whether it’s Sabaac in Star Wars, Pyramid in Battlestar Galactica, or just straight-up poker like we play here in the real world, just about every wretched hive of scum and villainy that pops up on screen has a group of sketchy individuals sitting around a dimly lit table glaring at each other over a hand of cards. There have been several genre-themed tabletop games that have abstracted gambling games, providing little more than flavor for a random card draw, but I’ve never seen a board game incorporate actual poker mechanics to the extent that Bardshark’s debut title Antematter does. They sent us a prototype of the game leading up to their Kickstarter, and we took it for a spin.

Dubbed “the first and only poker strategy board game,” Antematter is a 3-6 player game that alternates play between an elegantly designed hex-based tactical map of a solar system and a custom poker deck. As in poker, the goal is to have the biggest stack of chips (here called ‘Nephelium’), though the exact amount needed to win is determined by player count. Players select their color and corresponding 25-card crew deck, place their three ships in the base area nearest to where they are sitting, stash their four bridge pieces just off the side of the board, and collect 300 Nephelium chips (one blue, two red, four white) for their starting stack. Each player draws a beginning crew of four cards from their crew deck, and is dealt a card from the poker deck to determine who goes first. High card gets the dealer button, with gameplay commencing in two-part rounds, here called cycles. 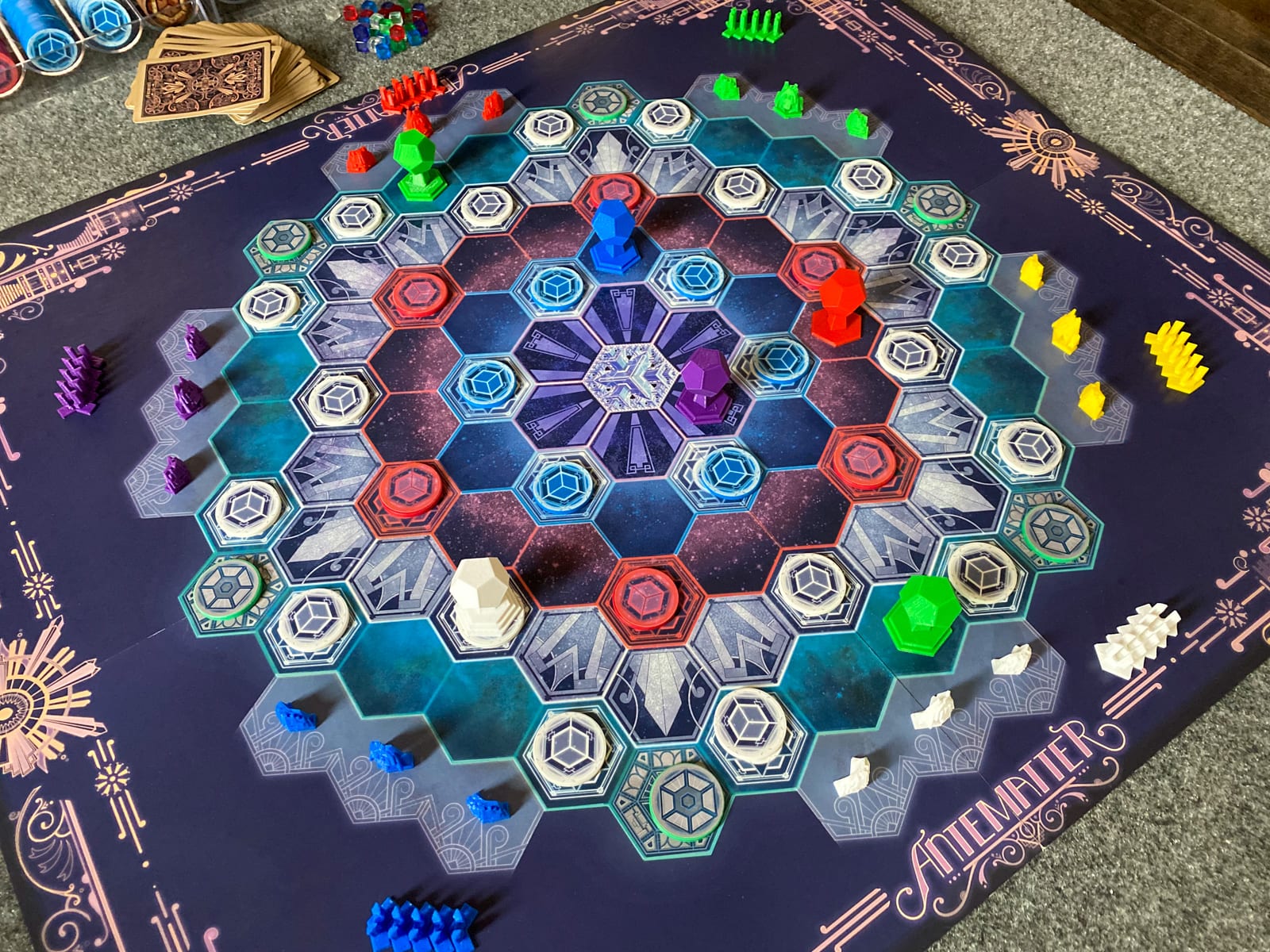 This is where the Loot phase happens

During the “loot phase” of each cycle, players take turns piloting their ships around the map, looting “Plunder hexes” and planets for chips and more. Each player gets three “burns” on their turn. Ravens can move two hexes on one burn, and can plunder the white, red, and blue plunder hexes for Nephelium of the corresponding color and value, also drawing a new card from their crew deck to be added to their hand once they complete their turn. Rocs, however, can only move one hex per burn under normal circumstances. They cannot loot the Nephelium on plunder hexes, but they can land on planets and loot them for two Nephelium of the corresponding color (when applicable) and a matching cargo cube. Cargo cubes can be traded for 100 Nephelium each at the center hex, known as the Engine Star. Each player’s Roc can only carry one cargo of each color, and if a complete set is traded in at the Engine Star a bonus 250 Nephelium is awarded.

Player’s can apportion their three burns to their ships as they see fit. Each of their ships can use one burn apiece, or any one of their ships can use two or even all three. There are several loot phase crew cards that can add more movement options, but Rocs in particular have a couple of unique ways to get further on one burn. First, there are the bridge tokens, which can be placed by Ravens on an adjacent hex after a burn. If a Roc moves onto a hex with a bridge token of their color, they can move an additional space. If there are multiple bridge tokens lined up on adjacent hexes, the Roc can travel along them as if they were a single space. Second, on a turn following a planetary visit, a Roc can use the planet’s gravity as it moves in orbit around the Engine Star after each cycle to “slingshot” off the planet and move two hexes instead of one. 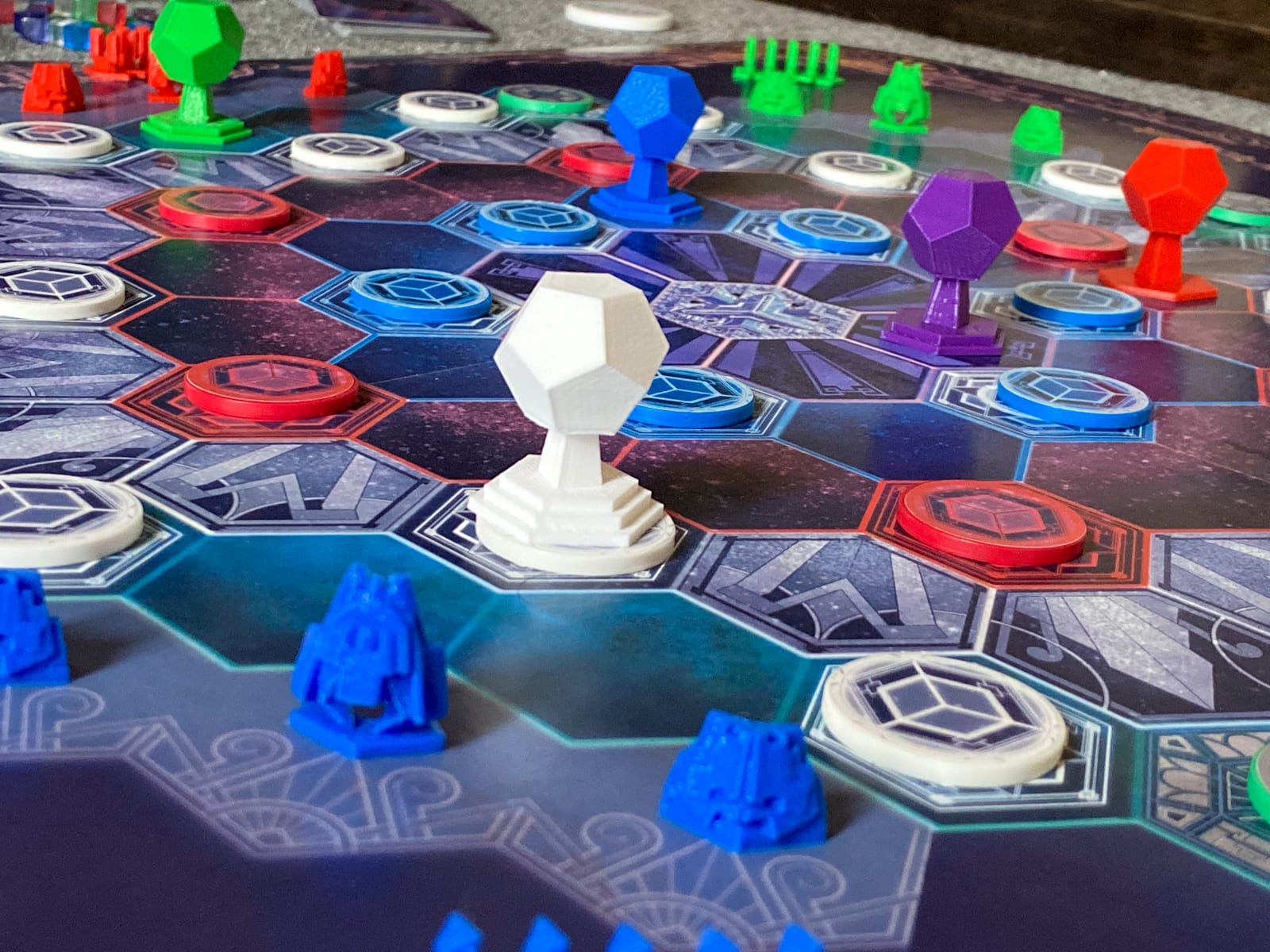 Both Rocs and Ravens can visit “Dive Bars”, Green hexes with a green Dive chip. You don’t get to keep the chip, but you can draw up to a full hand of seven crew cards, or discard what you have and draw a complete fresh hand. Each crew deck has a theme and unique gameplay style: The Isan (yellow) are all about speed and distance during the loot phase, while the Conclave (purple) can trump other bets and even manipulate the cards on the tableau.

The real opportunity to amass chips, however, is the “poker phase”- Texas Hold’em with a twist. In all respects, this phase plays like a normal hand of poker- each player antes up, gets dealt two pocket cards, and betting proceeds at each step of the hand: pre-flop, flop (first three cards), turn (next card), and the river (final card). It doesn’t stay that simple in Antematter’s version of Hold’em, though, and there are a few ways the game injects a layer of unpredictability and disruption into the tried and true poker gameplay. For instance, using poker phase crew cards can radically alter the course of a hand: Gambit cards can beef up your bets, Trump cards can keep you in the hand and get you out of paying into the pot, and other cards can provide awareness and even control over other players’ hands or what’s dealt to the table. 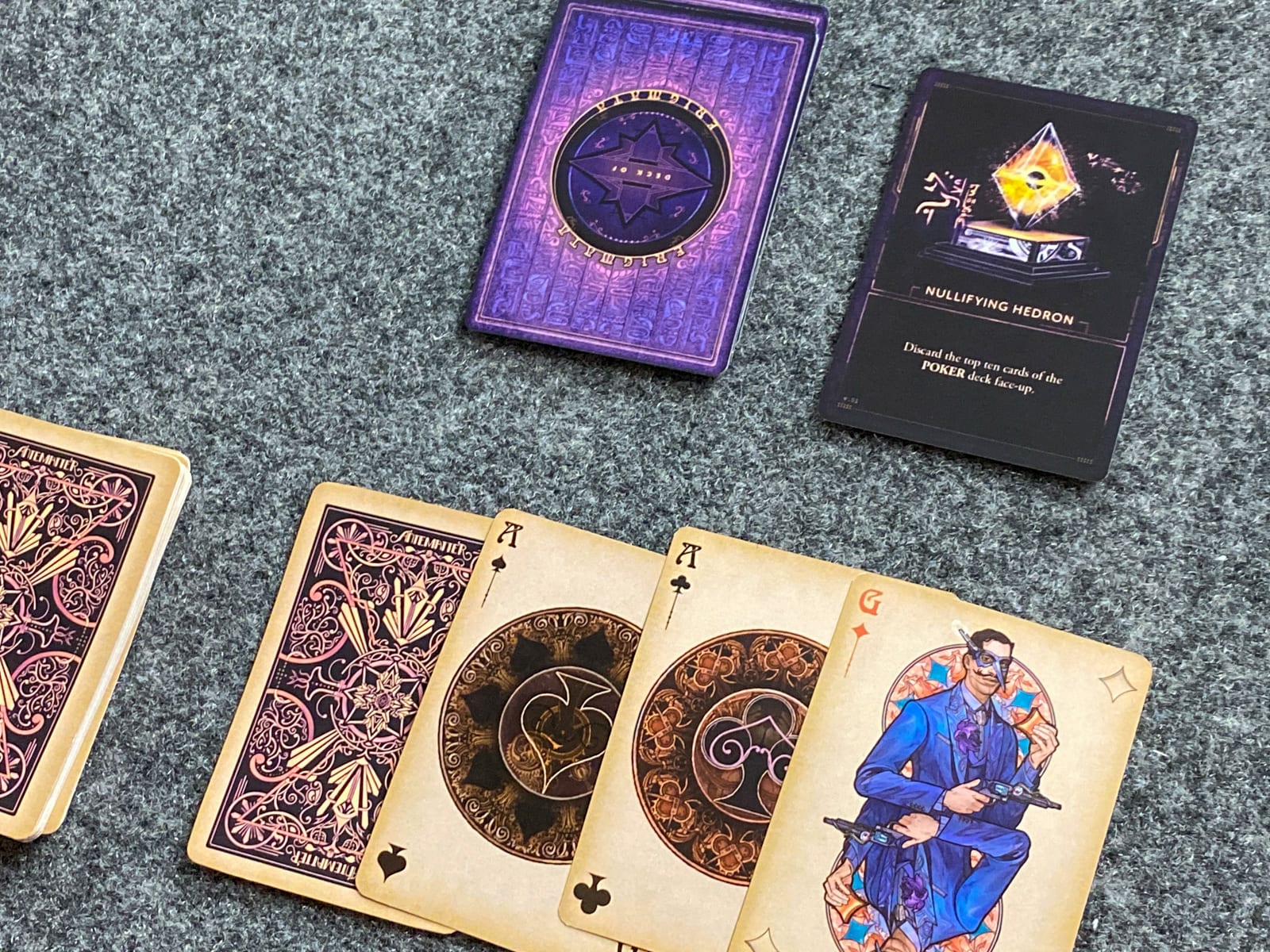 A Grifter on the flop means its time to draw an Enigmata card- rules are gonna change!

Another key addition is the Grifter card. Grifters are described as Antematter’s Joker cards, but instead of leaving them out of the deck, they can end up in a hand or on the table, and where they land determines the consequences. When a player is dealt a Grifter, they can choose to either replace it with a new card or hold onto it. If they keep the Grifter and are able to bluff everyone out of the hand they get a massive payout of 20x the current ante value. A Grifter hand cannot win in a showdown, however, even if the player’s other pocket card would ordinarily result in a win. Anytime a Grifter card is dealt to the board, it is removed to the burn pile and a replacement is drawn. If it happens to come out on the flop, then an Enigmata card is drawn. This small deck of cards has only one specific purpose- to dramatically change the rules of the hand. Some examples include reversing the order of play/betting around the table, dealing a second flop that the players can choose to use instead of the first one, or forcing each player to choose one of their pocket cards and hand it to the player on their left. Enigmata cards can swing a hand in just about any direction, and the deck introduces the biggest changes to the standard Hold’em rules.

Gameplay continues in this fashion until one player meets the winning conditions. Every four cycles (called a stage) the ante goes up and the board’s plunder hexes are replenished with the next highest chips (White plunder hexes get red chips, red get blue, blue get black, and unclaimed chips from the previous stage are left on the board to stack with the new chips). Additionally, when a player goes bust after a poker hand, they aren’t out of the game, but their ships return to base and they get another base stack of 300 chips to keep going. Winning Antematter isn’t just about having the biggest chip stack, players not only need to meet the winning threshold of total chips, they also need to attain the Token of Respect, a coin awarded to them according to a seperate (slightly lower) threshold, and hold that token for a full cycle as well. This prevents an instant win situation after a big hand during the poker phase, and gives the other players a chance to scramble and thwart them during the next loot and poker phases. 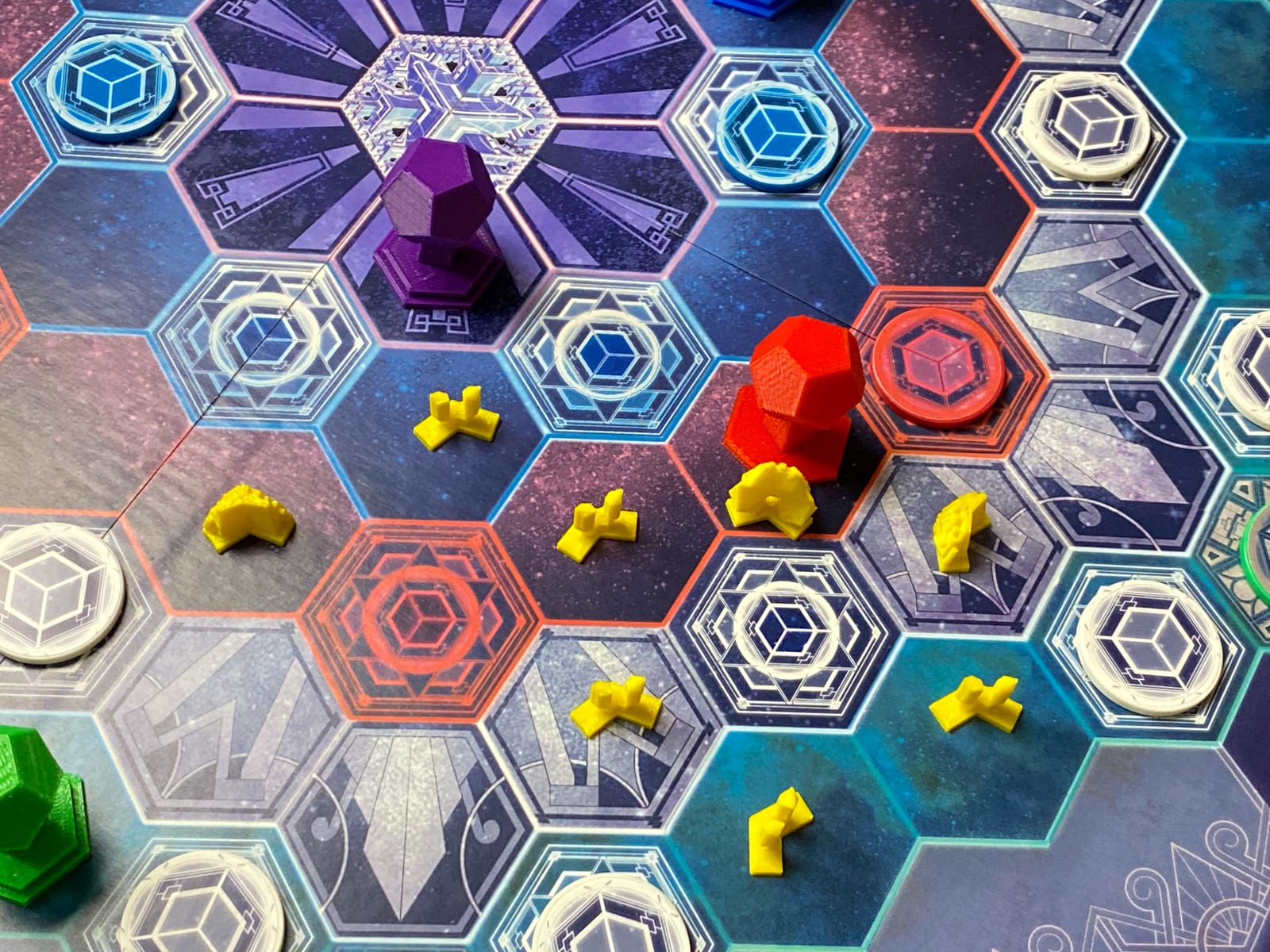 This Roc can visit two planets with two burns, some bridges, and a crew card that lets it plunder more than one planet this turn.

We had a lot of fun with this game! I’m a big fan of Hold ‘em, and Antematter deftly scaffolds a sci-fi strategy game on top of the familiar gameplay. The loot phase provides an interesting way to build a chip stack up to fuel more daring strategies during the poker phase, and the give and take of it becomes even more hectic and interesting the more players you have, as loot is more scarce and ambushes are more prevalent. I especially liked formulating strategies around bridge placement, surprising opponents with unpredictable board traversals and snapping up chips right under their noses. It’s nice having a set of game mechanics I’m familiar with out of the gate, but that is a double-edged sword- those same mechanics I’m counting on are easily subverted by crew abilities or enigmata cards. I had a blast with these added rules, but I would like to see how playing more than one hand impacts the game overall, as I feel playing only one hand blunts the experience a bit. It’s harder to get a read on your opponents and I’d love to spend more time with the rule-bending Enigmata and crew cards. The most exciting parts of the game happen during the poker hands, and I want more!

Even in prototype form, the visual design of the game stands out, blending Art Deco, Steampunk and science fiction. The board alone is a beautiful sight on the table, though I would like to see a little more utility added- a tracker for cycles and stages for instance would be very helpful, or even a chart that displays the winning thresholds by player count. Having more prominent visual cues for these mechanics might help enforce them better during the game. All in all, I’d guess the prototype is very close to what the final product will look like, and I’m eager to see how improved build quality and printing enhances the beautiful artwork on the various components. 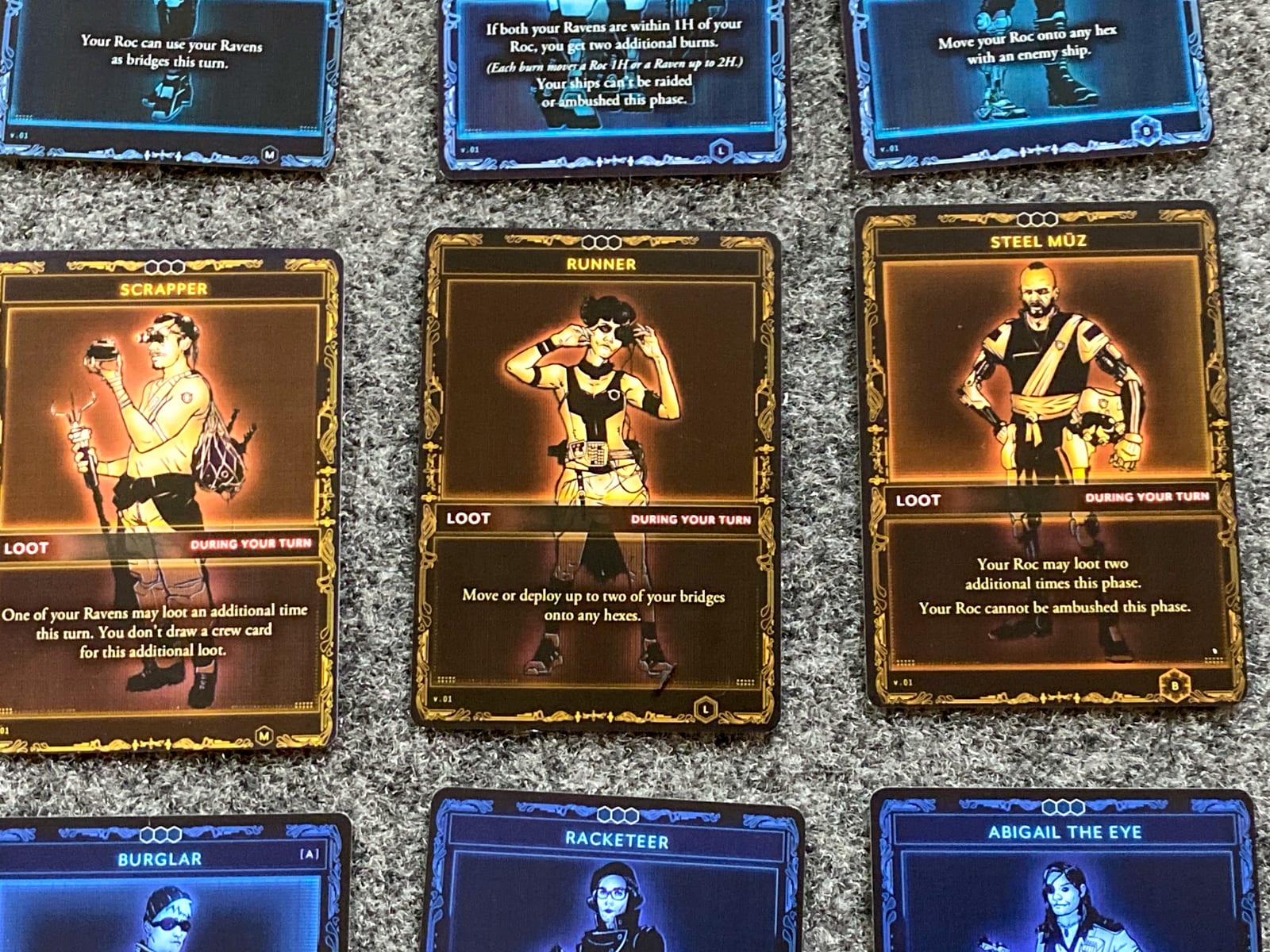 Just a sampling of the high quality crew card art.

Antematter is an interesting blend of traditional Texas Hold’em and Sci-Fi themed strategy, with over a week to go left in the Kickstarter campaign. The game has already achieved its funding target, and is steadily progressing through stretch goals, including a new crew faction deck and additional Enigmata cards. The campaign ends on September 24th, so there’s still plenty of time to back this safe bet!

In space, no one can hear you fold—Antematter preview