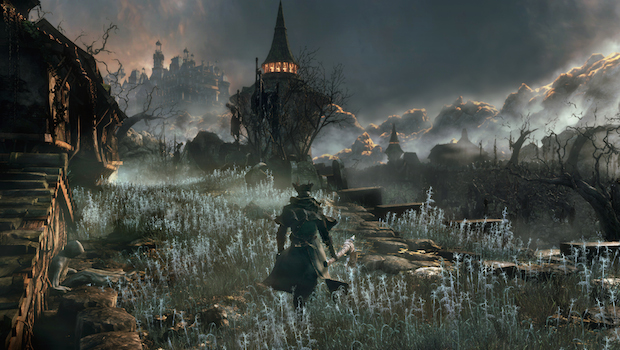 As an avid and awful player of the Souls series, I was really looking forward to getting to die a million times over in the spiritual successor to the franchise, Bloodborne.

Greeted with the choice of four classes, I chose the standard hunter that’s been seen in many videos and previews, wielding a blade that resembled a straight razor and a blunderbuss. Bloodborne’s weapons are in the driver’s seat, much more than previously. The options available, from the war hammer to the twin daggers, are all unique and viable, and there’s more room for personal choice in weapons over than having to choose based on stats or ability to wield. Each weapon also has an alternate mode, in place of the Souls’ series two-handing. For example, the straight razor can extend out or retract in, allowing for slow sweeping arcs or a quick succession of cuts, respectively.

The city is beautiful, but the architecture also hides many deadly encounters.

As the loading music slowly faded out and my hunter rose up from the ground, I ventured forth into the ruins of a Victorian-era city gone wrong. It was empty, besides a few lunatics with pitchforks, axes and torches. The city is both beautiful and haunting; tall and intimidating buildings watch over the dangerous streets, and each steeple and gargoyle inspires both a fear of the unknown, and a desire to explore the abyss awaiting inside.

As I dealt with the first enemies I encountered, I realized how different the game feels without a shield. My last bastion of safety when everything has gone wrong, I was afraid of every incoming hit.

Luckily, the game has made some allowances to make up for your missing bulwark. Projectile weapons are always available, regardless of what mode your main weapon is in. The blunderbuss is brutally effective, although it still means having to get in close and in range of enemy weapons. Enemies have guns as well, though most in the demo were unwieldy single-shot rifles with poor accuracy, easy enough to dodge as long as you weren’t pre-occupied.

The villagers are not happy to see you, and it’s never clear whether they’re crazy or trying to stave off something more evil.

Dodging is also seriously enhanced in Bloodborne, with the option to do short dashes as well as full combat rolls in any direction. Dodging and retaliating is key in this game, as you gain health back from hitting enemies and that tends to be a reliable source of mitigating damage in place of using precious resources.

As I progressed through the town, I found where everyone had gone – in the town center, citizens had gathered around a burning stake. As I approached, they grew hostile, and I finally started to hear their words. “Go away!” “You’re making it worse!” “Please!” I felt like the invader in their world. In Bloodborne, not all your enemies are ghouls and skeletons, and the feeling of having to forcibly bypass an entire town of villagers was impactful.

Alongside my main melee weapon and secondary weapon, I also acquired some gadgets and items. As always, there are healing items, like blood vials. Molotov cocktails are also an option, acting similar to firebombs with a little more kick to them. There’s also the option to use pistols instead of the blunderbuss, though pistols felt a little more useful in picking off enemies at the start of the fight, rather than a viable option in the heat of battle.

Combat in Bloodborne is brutally fast, and a few mistimed dashes will result in a quick death.

There’s still a lot to be seen in Bloodborne. There’s still no sign of upgrade systems or levelling, and the use of a resource received from killing enemies is still ambiguous. You definitely receive something for killing enemies, but whatever it is has yet to be revealed.

As a gameplay demo, though, Bloodborne’s showing at the Playstation Experience was strong. Miyazaki and his team at From Software are innovating on many of the standards they set themselves, and doing it in style.