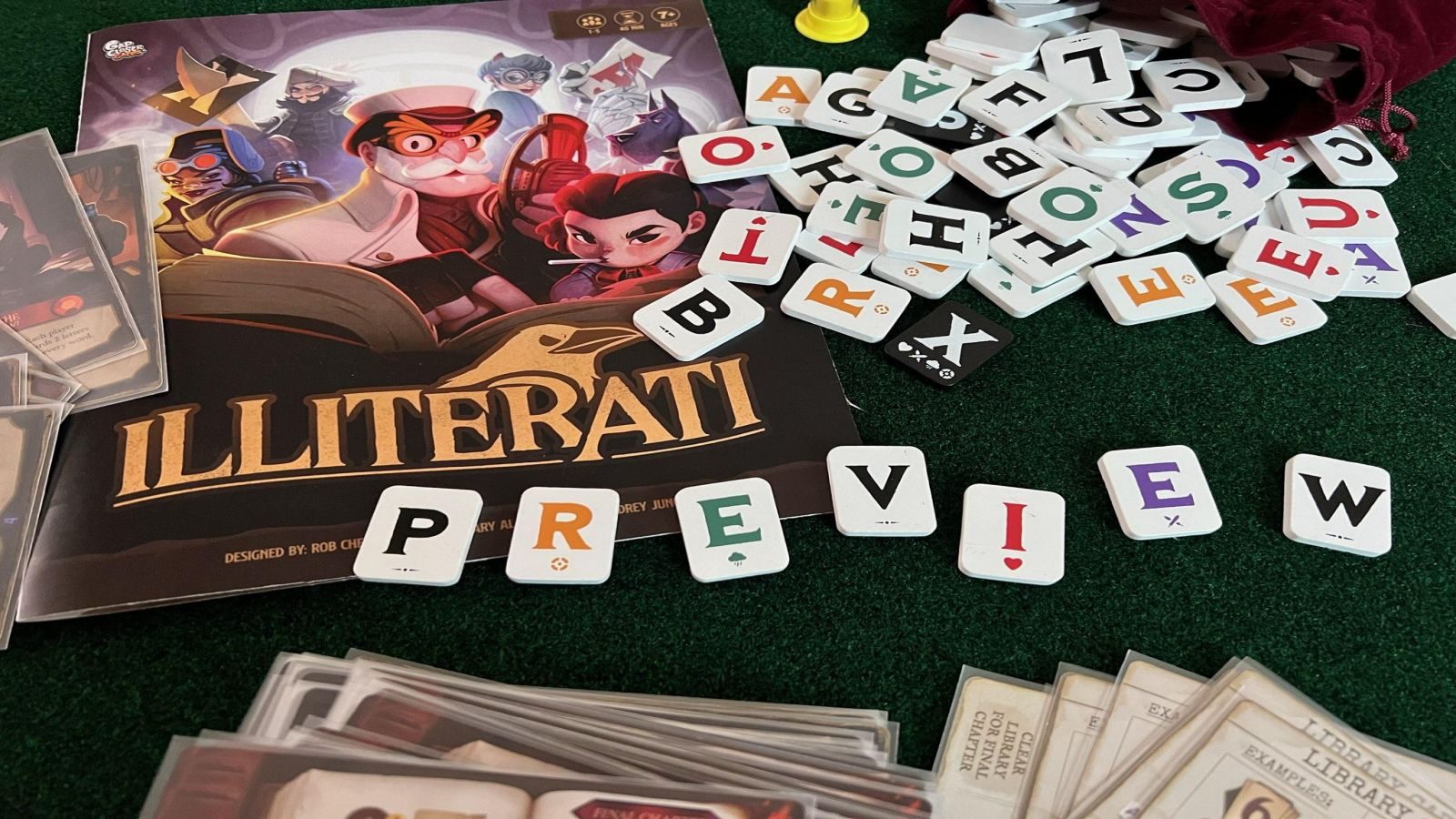 In a world of letters and words that serve to bring everyone together, the illustrious, incorrigible, Illiterati seek to make the world illiterate. Illiterati is a co-op game for one to five players made by Gap Closer Games, in which players combat the secret organization of the Illiterati. Designed by Gary Alaka, Rob Chew, Jon Kang and illustrated by Audrey Jung, Illiterati boasts a relatively short play time. As a real time game, Illiterati definitely stays true to its play time.

A game of Illiterati takes place over many rounds in which players are given wood letter tiles to construct words which help them to bind books and keep the Illiterati from succeeding in making the world illiterate. To start a game, all players get a book that is either torched (red) or waterlogged (blue) and receive some letter tiles to go with their books. The timer is then placed within view of all the players, and during a round after players get their new tiles, and the timer you just placed, flips signifying players have three minutes to make words and not have letters left over. Letters that are left over are either added to the library, which can be accessed by all players, or if there are more letters left than the burn limit would allow, then a letter gets burned at random and the rest of those left over letters get discarded. 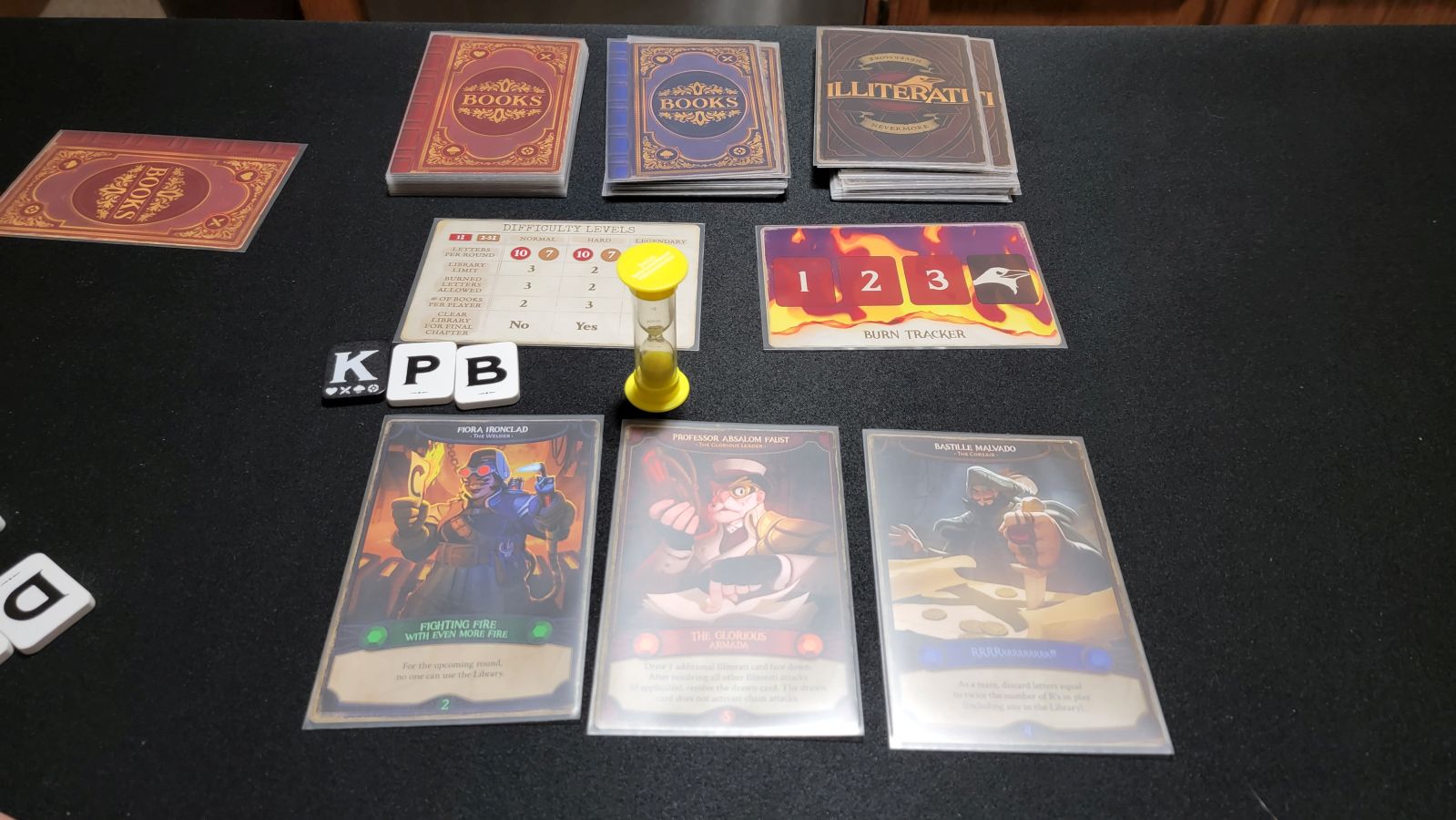 The small but interesting idea here is to at least make words, even if they do not contribute to your book. How do words contribute to your book you say? Well each type of book wants different types of words to fulfill and bind your book. Red books players are typically making words that correspond to something like holidays and events,or movies and tv shows. Meanwhile, blue books have players making words that are things like anagrams or homophones and more along those lines. The caveat to both of these is that they require a certain amount of letters. Now it is not quite that simple, on the letter tiles there are also one of four different symbols, that correspond to a color, or it is a standard tile. The book requirements also require within those letter tiles, to have certain amounts of one color. So between having to reach certain amounts of letters, and having certain amounts of one color, players might have to form multiple words to satisfy these conditions.

This is all well and good until the Illiterati get wise to your efforts to keep the word literate. These guys as a secret society are unrelenting and take no prisoners. They work hard to keep players down by making them remove tiles, remove words, block off the library to players and even sometimes make players craft extra words to bind their books. This is problematic when letters are at times in short supply. What might happen is one player makes all the words they need for their book to be bound, but the Illiterati that came out last round might have said now they must use an extra four letter word to bind a word this round. If a player is not able to get more letters from fellow players or the library to make a four letter word, then this puts players behind another round from vanquishing the Illiterati. 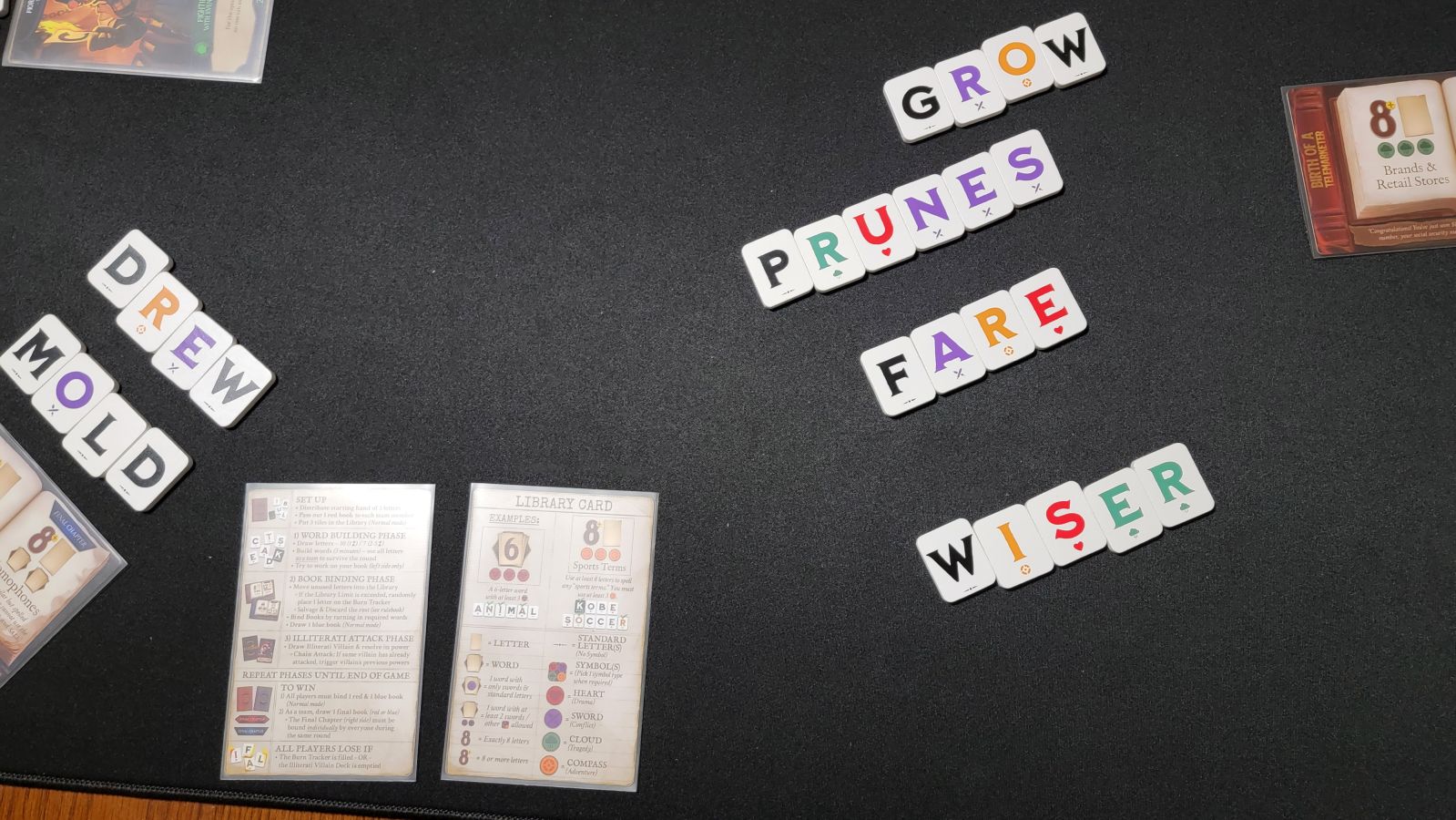 Why does playing another round matter this much? In Illiterati there are five different characters that make up the titular organization. When one comes out, their effect happens. These effects can include blocking the library or requiring extra words to bind books, but are not necessarily the worst when they happen initially. What makes them worse and perhaps even deadly are when a different type of the same character gets revealed. Now there are two of the same Illiterati character present, and this means they chain their effects. If in one round you were required to discard a word, well now based on this new card you follow the previous Illiterati card that made you discard a word, and then you also have to spend an extra word to bind a book. These effects can compound effectively which can make succeeding difficult. While this may be difficult it does thematically present as a great challenge that forces good interaction between players, after all this is a co-op game, and keeps one player from telling everyone else how to just win.

Well, how do you win then? Winning can be simple, or it can be very difficult based on the amount of rounds you play. Each player has to bind a certain amount of books. After players have all bound their required amount of books, one last book is drawn from either torched or waterlogged books and now all players must bind the same book in a round together to succeed at banishing the Illiterati once and for all. The more rounds you play, the deadlier the Illiterati become in their quest for word illiteracy. The quicker everyone works together the less difficult and more triumphant you are over the Illiterati. 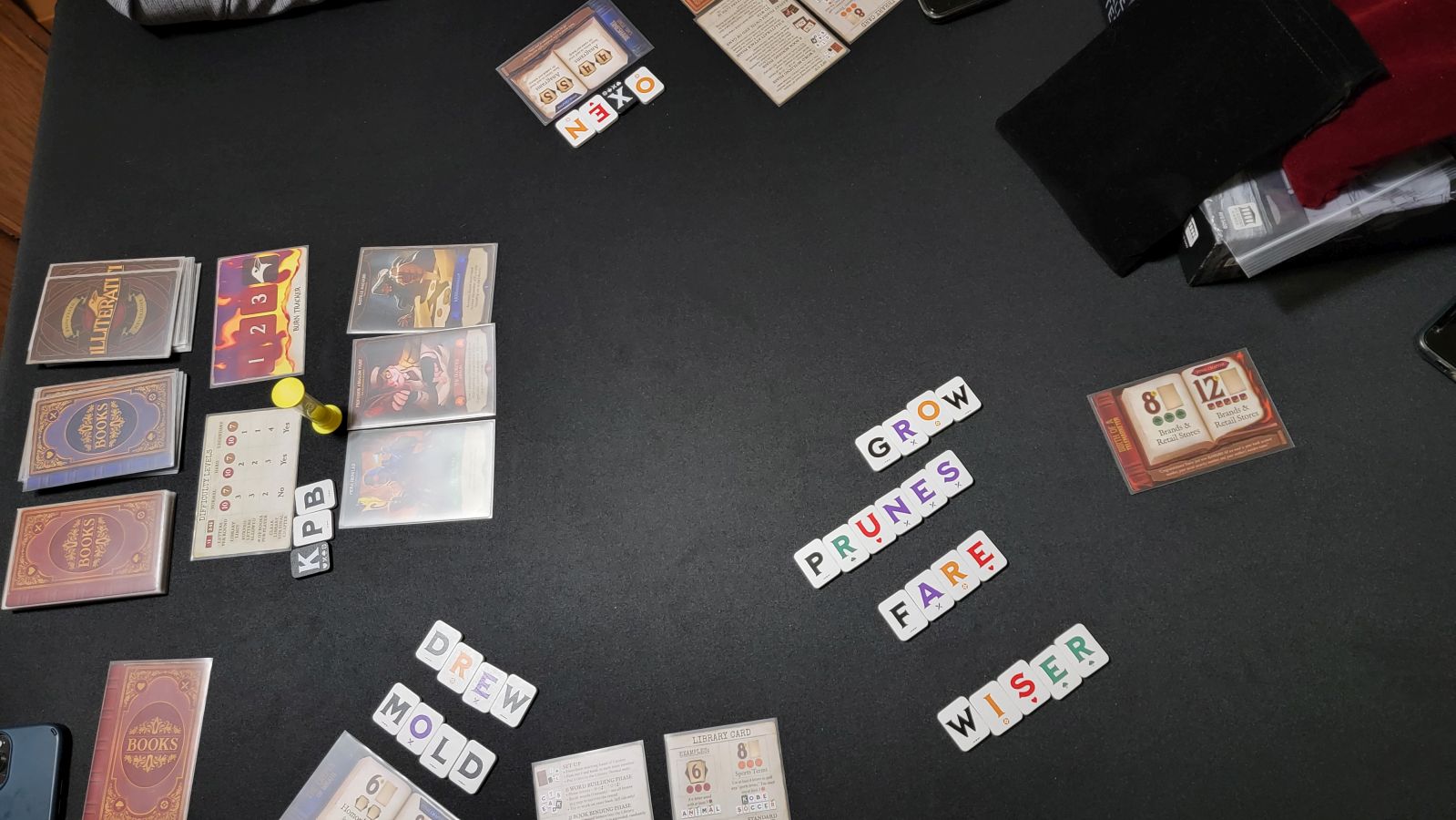 Illiterati functions as a fun and fresh co-op game that will definitely carve out its niche in the board gaming industry, if it already has not. My experience with Illiterati was a pleasant one. Good times with friends, little to no down time, fantastic communication between said group, and lets not forget the letter tiles, there is plenty to like here. The downside, if there is any, is that the game functions better depending on the group of people you are playing with. Playing with a group of people on a day where you meet up to play board games somewhere works and is fine. Where this really shines for me is when you have a close group of friends that all share a similar vocabulary or short hand of sorts.

At the end of the day Illiterati will carve out its own area of the game industry, and will cement itself as one of the better co-op games that exists. In a fight to keep the world literate and not let the Illiterati succeed, this game brings with it a level of complexity and brain burn that makes even the most seasoned players think twice. Having just finished their recent Kickstarter campaign and with rousing success, Illiterati looks to expand its way into the homes of players and become a standard for what real time co-op games could look like in the future.