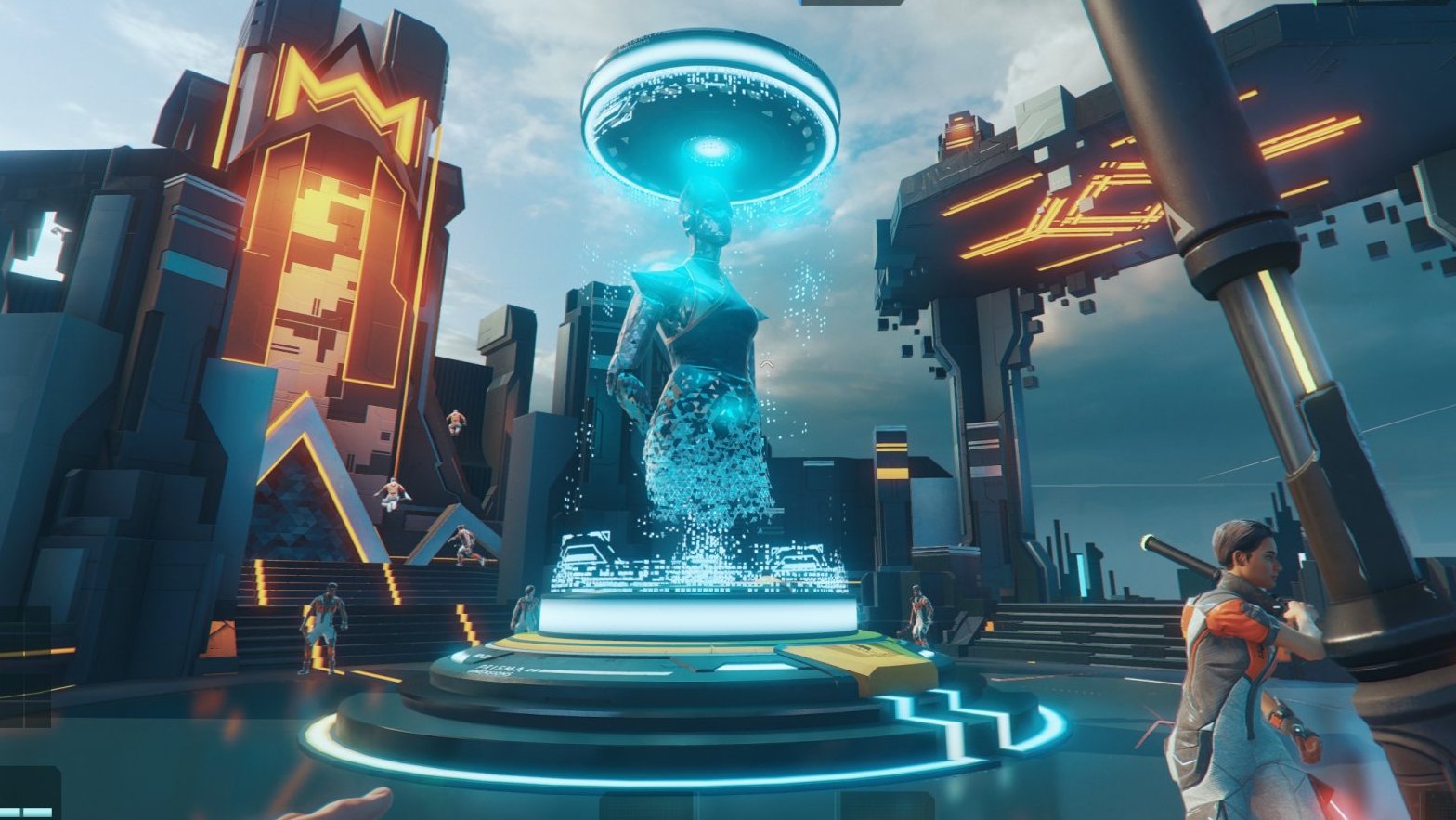 Hyper Scape is Ubisoft’s new entry in the battle royale genre that looks to differentiate itself from a cluttered genre by focusing on speed and mobility. I also hate its name. Hyper Scape. I keep wanting to call it Hyper Space. Thankfully, the gameplay itself is much better than the name.

Hyper Scape has players choose from a diverse cast of characters and hop into the Hyper Scape. What is the Hyper Scape? Think the interconnected virtual world of Ready Player One, a place for players to shoot each other in a battle royale. It isn’t a great narrative, but it gets the job done. Although one of the people you can choose says “git gud” and I hate it.

The beta had two game modes for me to try out: Crown Rush and Dark Haze. Crown Rush has three-man squads compete with other squads to either be the last ones standing or capture the crown. Dark Haze is a more limited, slower-paced solo mode with fewer hacks and weapons and a fog that covers the map, making it difficult to see. No crown in this one, you just have to be the last one standing. Dark Haze just seems to be the exact opposite of what Hyper Scape is going for and it just wasn’t as fun as Crown Rush. Hyper Scape is at its best when you and your buddies are moving, coordinating, and taking out other squads in a quickly. Slowing the pace down takes away some of what makes Hyper Scape unique.

What are hacks? No, I’m not talking about aimbot here, I’m talking about abilities your avatar can pick up and use such as healing, armor, bouncing around in a protected ball, teleportation, invisibility, and more. These are genuinely fun and I enjoy being able to use whichever ability I come across without having to be a specific character. You can have two of them equipped at any given time and they have quick cool-down times so make sure you use them.

If you are going to play Hyper Scape you better be able to go fast. This is a game that focuses on mobility. It reminds me of Apex Legends but amped up to 11, with its focus on parkour and varied movement abilities. There is no fall damage, you get a double jump, and the map is one large city. You will be running up, around, and through buildings looking for loot and players to kill. I like the look of the city, called Neo Arcadia. The bright colors and towering buildings do a fantastic job when it comes to helping Hyper Scape stand out from a dense crowd. 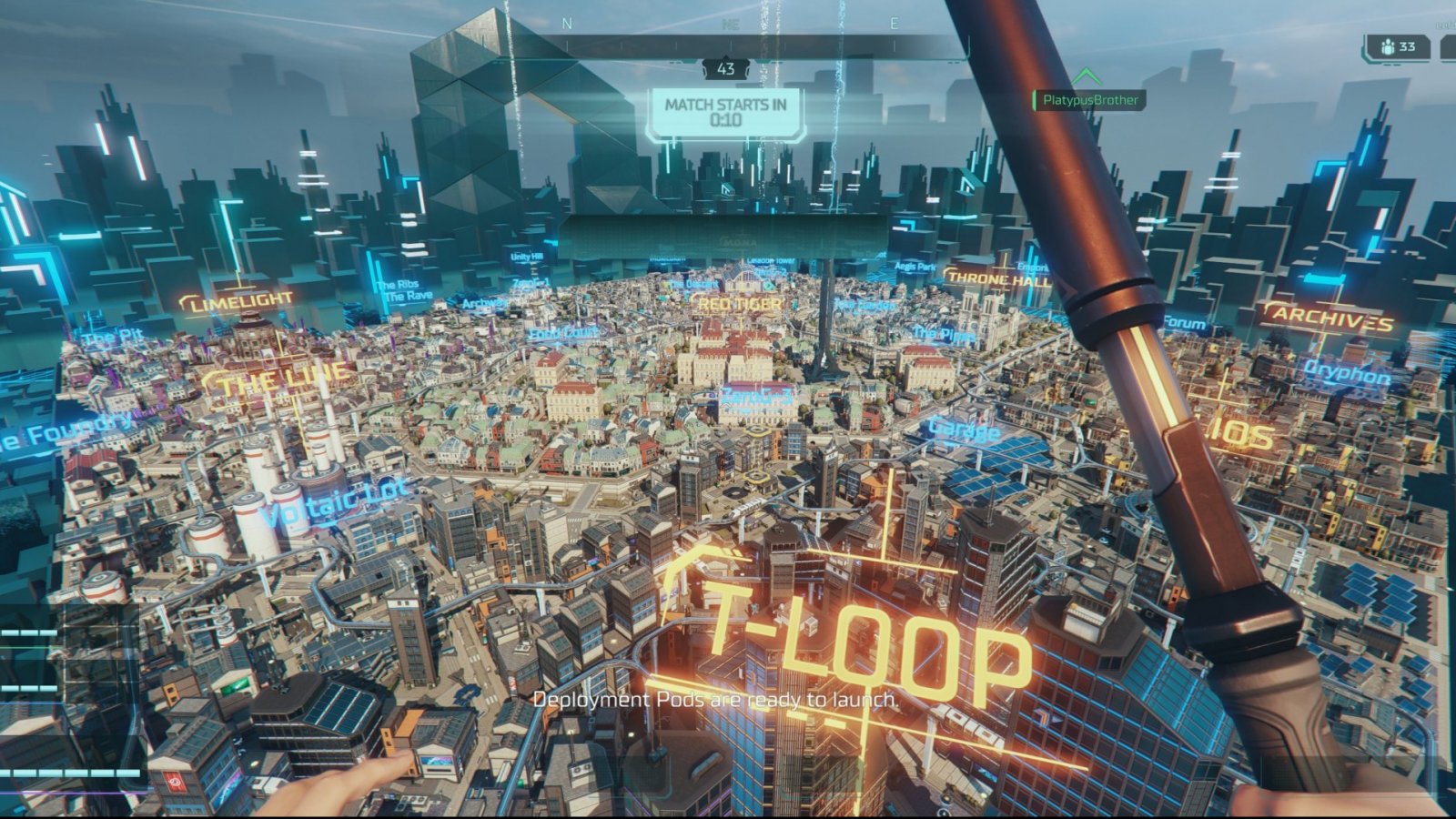 The environment isn’t the only way Hyper Scape is a bit different. The main mode is called Crown Rush for a reason. When you get to the last available area, a crown appears. If someone manages to grab the crown and survive for 45 seconds they win. It doesn’t matter how many people are left. This is an interesting twist on the battle royale formula even if it does generally come down to killing everyone else. At least there is something else to worry about.

Death in Hyper Scape is also more interesting than the typical battle royale than other squad-based battle royales. When you die, you may be out of the fight, but you aren’t useless. You can still run around, scout areas out, and mark items and enemies for your living teammates. Once your teammates are safe, you can look for a respawn pad that you can activate so your teammates can bring you back into the fight. Respawn needs work; it often glitched out and made me constantly restart the revival process.

Hyper Scape doesn’t have a circle like other battle royales. Instead, the city is broken up to different zones and those zones are destroyed over time starting with the outside edges and working in which limits where the player can go. It works the same way as a circle, but I do think it is visually more interesting. When the zone you are in starts being destroyed, you get a warning and a marker telling you where the nearest safe zone is. You also see the zone being destroyed over time as blocks of it are steadily picked up into the air until there is only an untextured husk left. Like a circle, being in these decaying zones does injure you. 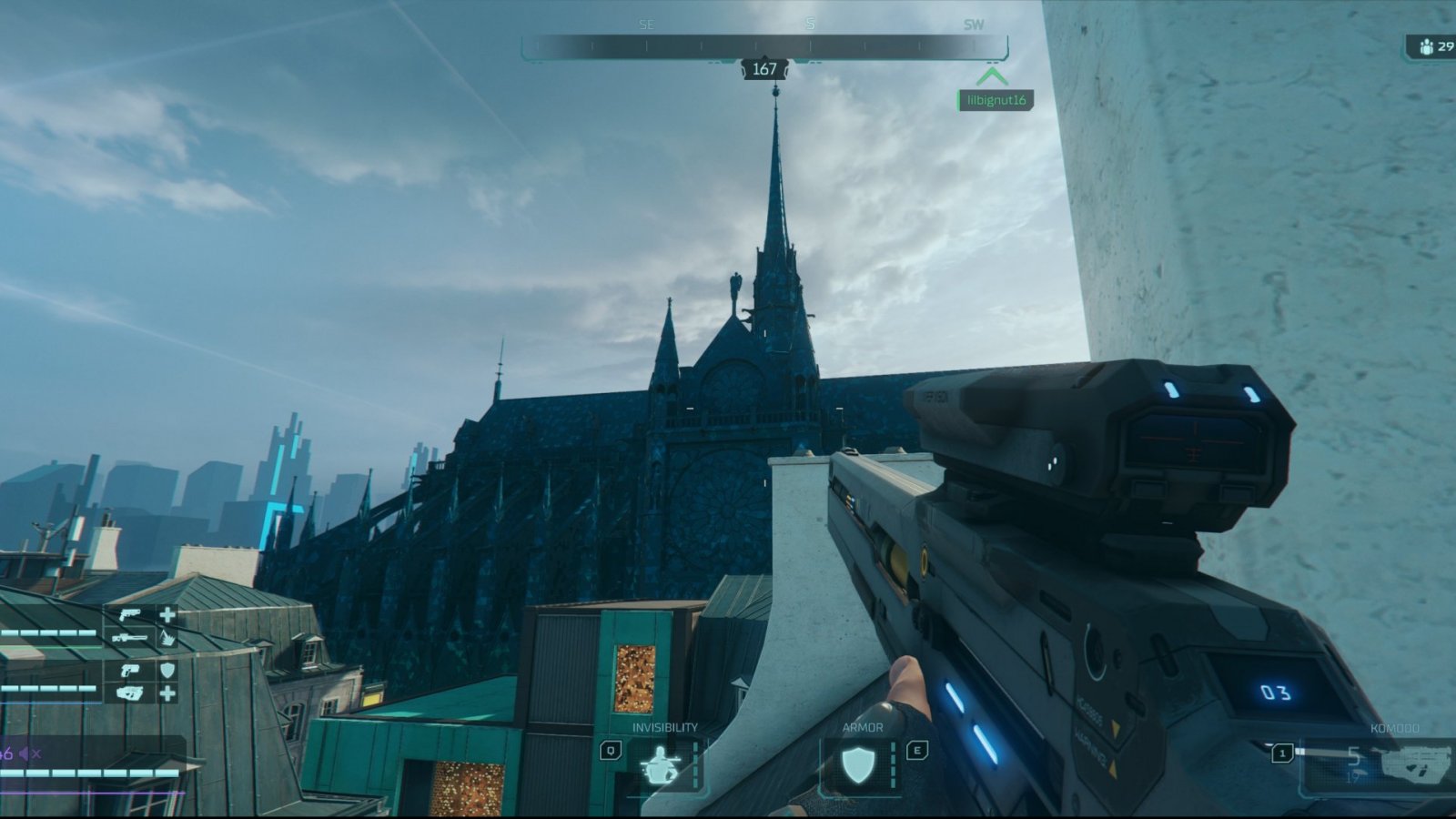 Along with all this, Ubisoft is also adding Twitch integration. What does this mean for you as a player? People watching your match on Twitch will have the ability to vote on an event that will change the game up for a limited time. This could be zero gravity, infinite ammo, or an extra jump among other things. Zero gravity is my favorite. I loved having the ability to leap over buildings to quickly get around. You have to be careful, however, as explosions will send you flying.

Hyper Scape’s weaponry needs work. They need tweaking and I’m just not a huge fan of how some of them work. I don’t care for the pistols at all. The D-Tap is a weak, auto-aiming pistol, but in a game about being able to outshoot people, it removes the point if you include weapons that eliminate aiming. The Riot One is a slow shooting, heavy-hitting pistol. You will find yourself getting completely out-gunned by the other weapons. 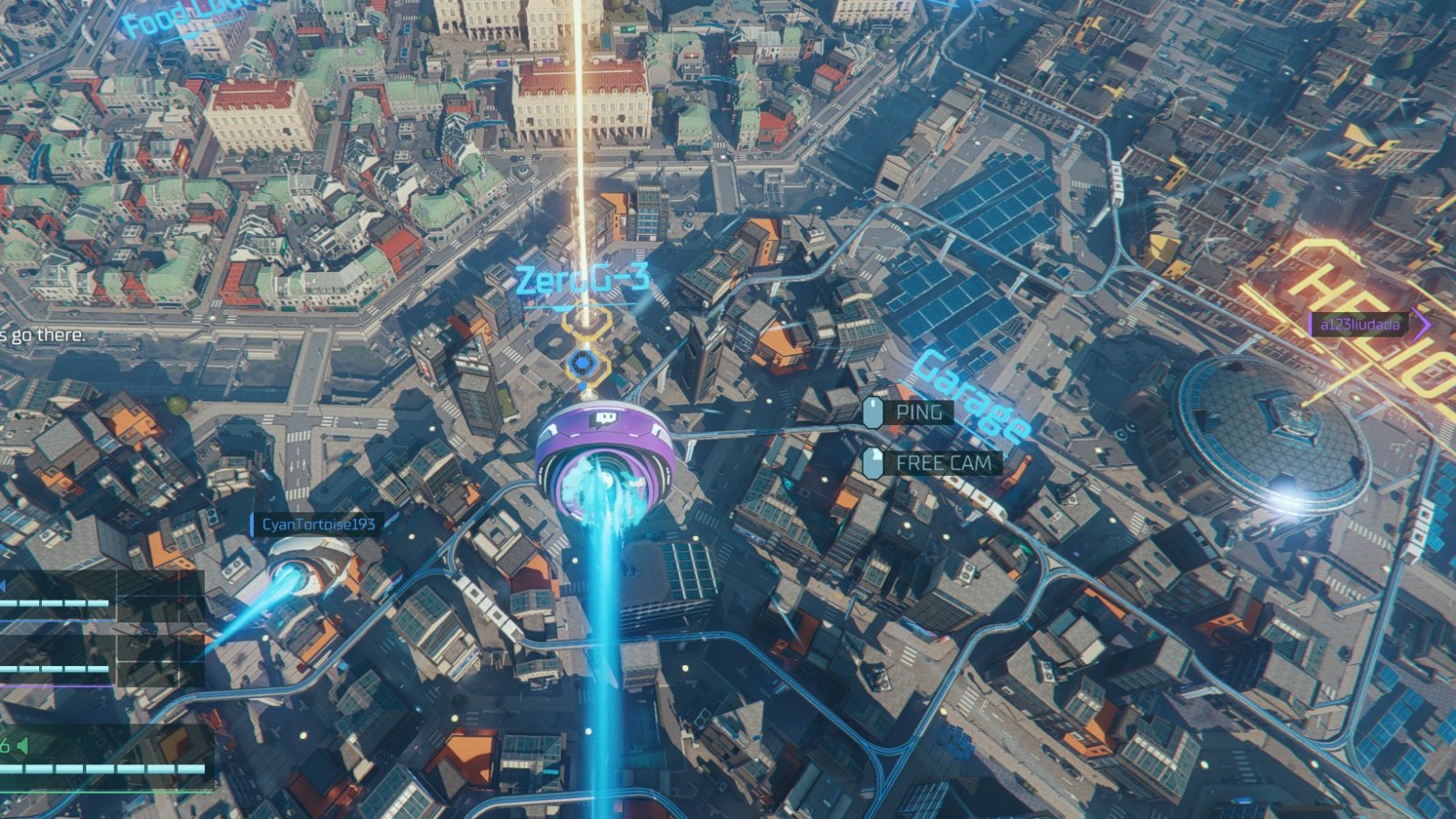 Where we dropping boys?

Yes, Hyper Scape suffers from the same issue I find all battle royales suffer from: there are really only three weapons that are any good. The Hexfire, the Protocol V, and Skybreaker outclass the other options. The Hexfire is a minigun that destroys everything in front of it, the Protocol V is a sniper to take out targets at long range, and the Skybreaker shoots an energy ball that deals massive damage. You can throw the Mammoth MK1 shotgun and Salvo grenade launcher in here as well but they are more situational. They will deal damage to opponents up close or indoors, but they really suffer if there is any distance between you and your target. My favorite loadout was the Hexfire as a primary and the Protocol or Skybreaker as a secondary. You are set to handle any combat situation.

Something else that separates Hyper Scape is how upgrading weapons and hacks works. Rather than just finding higher-level versions around, you fuse guns to level them up. So if you have a Hexfire and see another one on the map, you can fuse it into yours to get a bonus to damage or ammo size. These are important for the end game where you are going to want every edge you can get over your opponent.

Overall, I enjoyed my time with Hyper Scape. I think the weapons need to be re-worked but I enjoy the idea of hacks and the combination of mobility and speed is addicting. There are a lot of good things here and I’m excited to see where it goes.