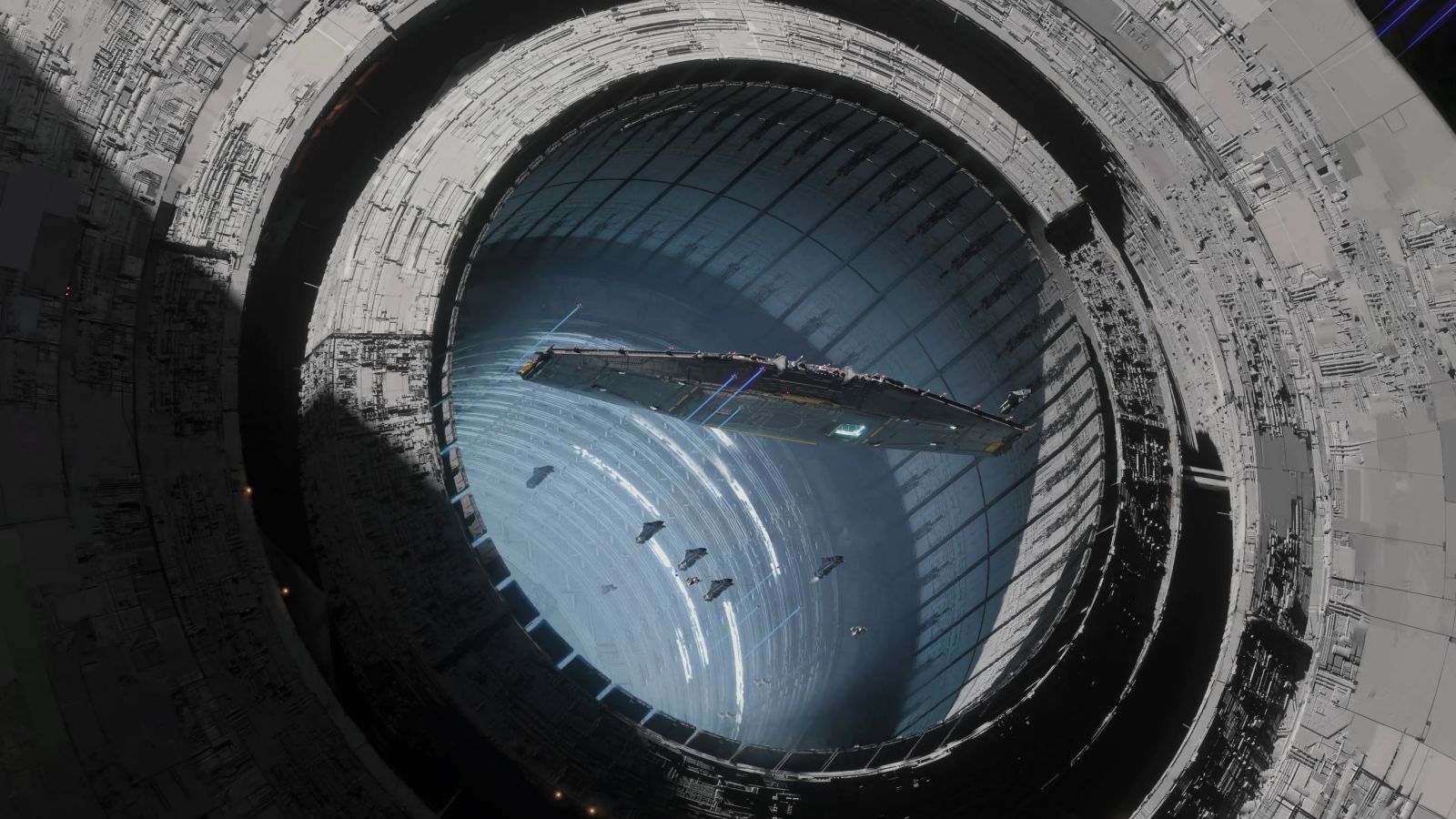 Homeworld revolutionized the RTS genre, pushing players to think multi-dimensionally about their engagements with the enemy. No longer would you meet foes on a level playing field, able to attack from all angles, utilizing a wide variety of tactical configurations such as sphere or wall. It evoked the same panic, exhaustion, and desperation as we saw in Battlestar Galactica as jump after jump slowly whittled away resources in a desperate bid to follow a mysterious stone map leading to a place called “Hiigara”. With a neuroscientist named Karan S’jet wired into a massive ship known as the Mothership for control, they opened slipstreams into the furthest reaches of space, giving us Homeworld (1999), Homeworld Cataclysm (2000), Homeworld 2 (2003), Homeworld: Remastered Collection (2015) and finally Homeworld: Deserts of Kharak (2016). Now, thanks to Gearbox and Blackbird Interactive, we’ve finally gotten our hands on Homeworld 3, and wow…you aren’t prepared for what’s next. It’s time to revolutionize the RTS genre all over again.

Homeworld 3 doesn’t suppose that you have played any of the previous titles. While it is a numbered sequel, you don’t need more than what you’ll find in the trailer below to get started. While the game takes place hundreds of years after the events of Homeworld 2, you might see a few familiar things. I’ll say no more for fear of spoilers. Additionally, it’s worth knowing that the game will feature a robust multiplayer mode, but the emphasis will once again be on an engaging single player experience. 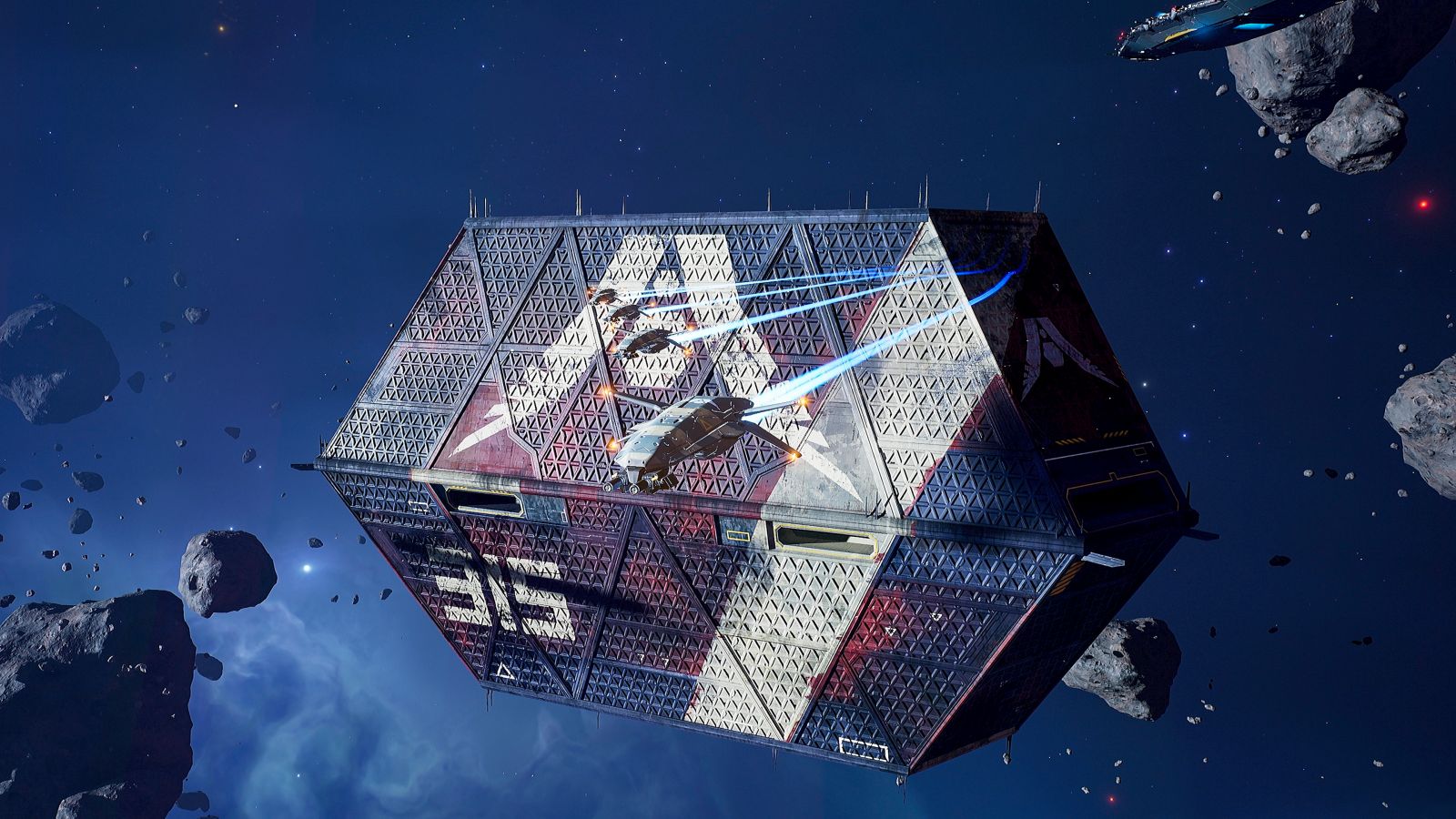 I got to play two levels for my hands-on time (Incidentally, I was the very first person in the world other than the developer and publisher to play Homeworld 3) – an early game tutorial, and a mission that showcased a true game changer for the series – cover.

The tutorial mission is called Facility 315 and is actually the second mission of the game. Facility 315 is a storage facility just outside the vast Kalan Wastes where we might be able to recover a Production Facility module for our Khar-Kushan Mothership. This module will let us outfit it with the tech needed to build additional ships, so it will be crucial on our journey. The mission opens and immediately demonstrates one of the strengths of this series, but amped up for a new generation of players – scale. The Mothership is a massive ship, but it’s dwarfed by the nearby station, asteroids, and the nearby celestial body. This would prove to be a persistent theme, and one I suspect will pay off in the final game with some battles against foes far larger than we’ve seen thus far.

Before we could recover the module from the facility we would need to secure the area of operations. Constructing some basic probes and locating them in a sphere at six locations around Facility 315, we were able to ensure we had full visibility of the battle space. Flipping to the tactical map, the probes were easily dispatched to the various points throughout the asteroid-strewn Kalan Wastes. Moving my Mothership into position above the facility, it was time to boot up the facility. Unfortunately, this would leave us in our most vulnerable position as the module slowly locked into the underbelly of the ship. Constructing a handful of recon scouts proved wise as our first test arrived right on schedule. 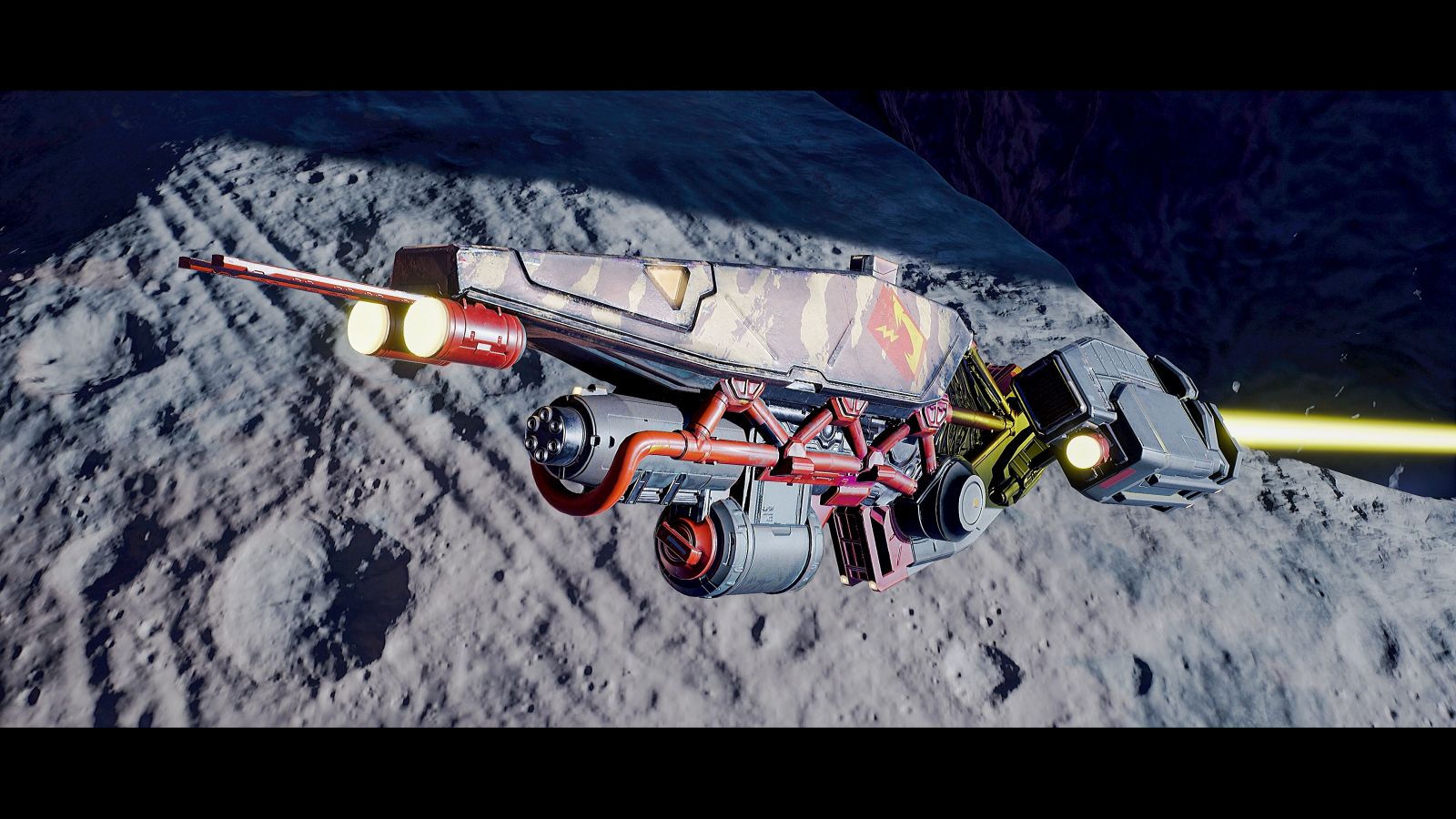 Out of a nearby asteroid a handful of hidden unknown ships roared towards our vulnerable Mothership. Sending our tiny recon fleet to intercept, I had to grapple with the 3D space synonymous with the Homeworld series as these unidentified hostels were homing in on our ship from all directions. Once they closed position two things were immediately apparent – these were Kalan Pirates, and they were far more prepared than we’d expected. As the production facility made its final ascent into the loading bay of the Mothership, a ballet of death unfolded around it. Small explosions as the pockets of oxygen within each ship flashed and died along with their hull structure, debris scattering amidst the stars. Chaos reigns as the only true identifiers between their ships and ours are the contrails of orange and blue that stream behind each. We had them on the ropes and pressed the attack until we saw what else they had brought to the party – a capital ship of their own.

With the module in place, I was now able to produce Interceptors. These small fighters are light anti-strikecraft, able to obliterate other fleets with numbers and speed. Using the limited RUs at our disposal (the resources collected from the wrecks of other ships used as currency and materials for building) I instructed the Khar-Kushan to build five Interceptors – we’d need them to survive the next wave of Kalan Pirates. 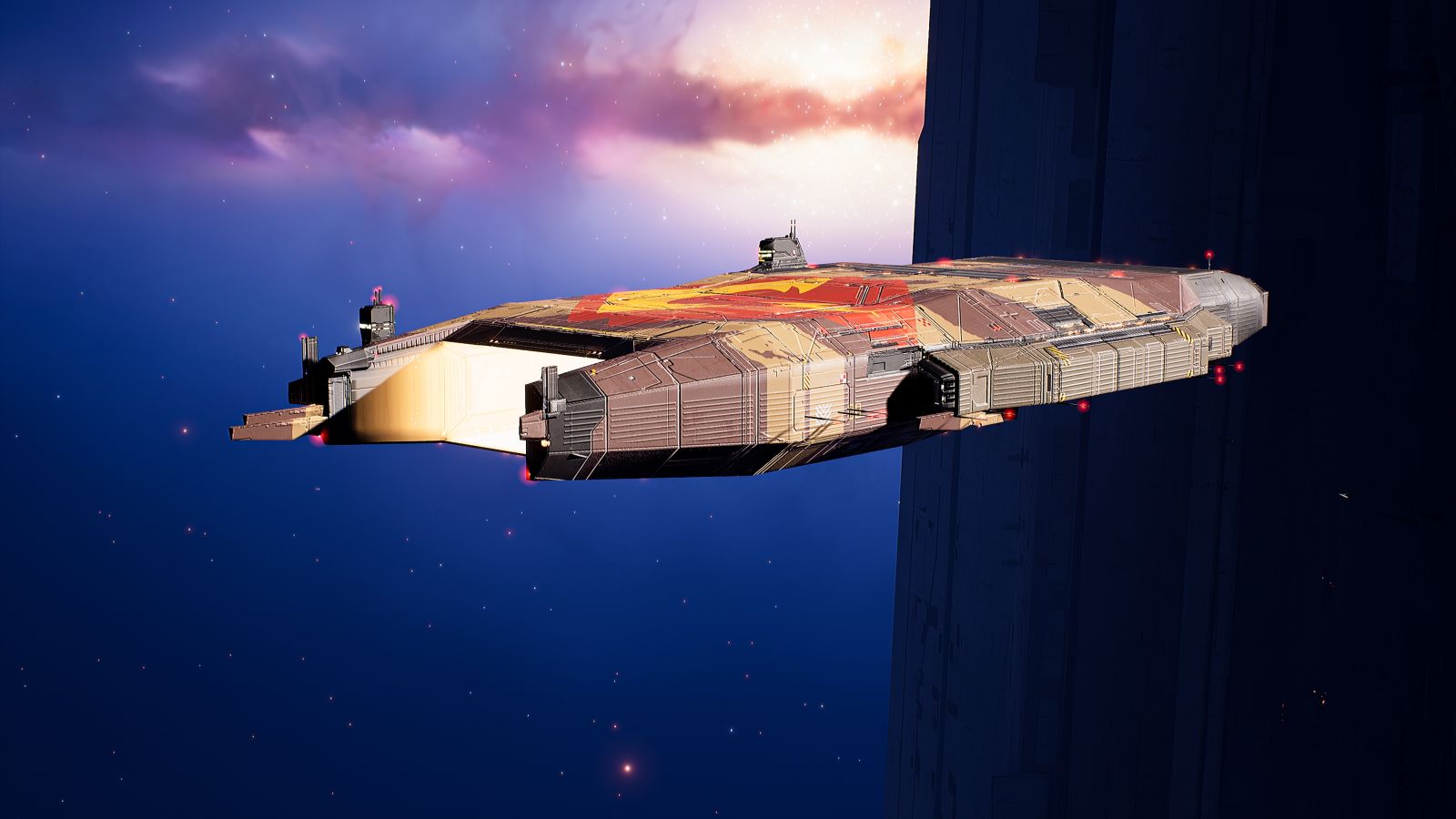 Luring the pirates into range of the Khar-Kushan, she unleashed a constant barrage of firepower that, combined with my Interceptor and recon scouts, made short work of the pirates. Their carrier commander, knowing that he stood little chance against my rapidly expanding fleet, quit the field to fight another day.

The second mission I got to play was the third in the campaign entitled Kesura Oasis. In it we were tasked with heading to a waypoint gate, re-establishing power and control of the hyperspace portal, and making the leap. It sounds straightforward, but doesn’t it always? 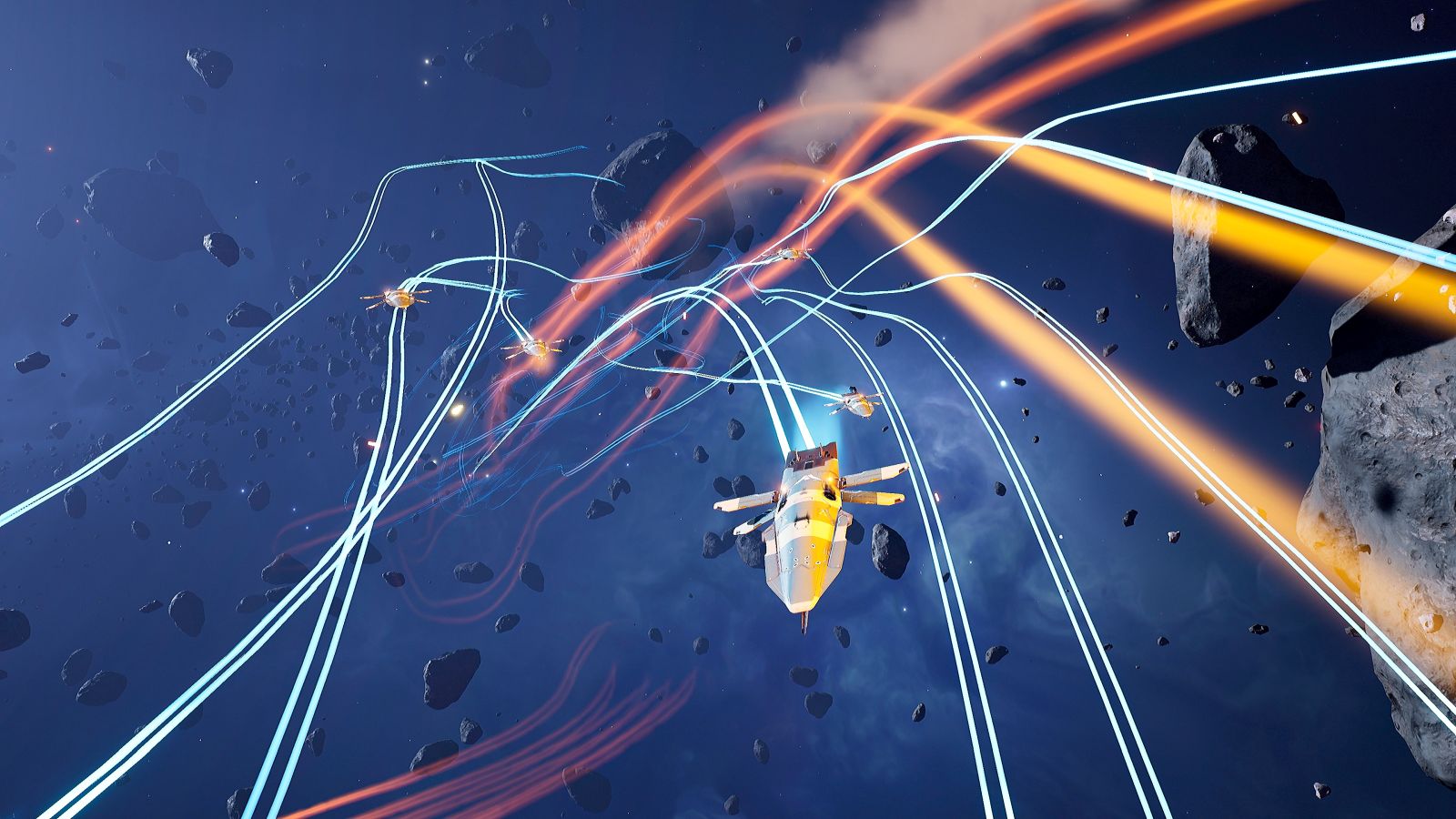 I knew I was playing a Homeworld game the first time the camera glided into the cinematic mode, showing the action from a new perspective. The enemy had ambushed me, waiting behind a large piece of debris and unleashing a barrage of missiles at my unsuspecting scouts. They stood no chance, exploding almost immediately as missile after missile slammed into their hulls. It was well executed, and it showcased what has to be the biggest draw (that we know of so far!) for Homeworld 3 – cover based combat.

Homeworld 3 brings a lot of subtle and significant improvements to the formula. Just a moment prior I’d experienced the fully simulated ballistics system, and I got to use it for myself soon enough. Missiles fired from either side have a travel time, and while they are quick, they are also possible to evade. Enemy missile frigates would send missiles careening towards my ships, and I could use a nearby chunk of capital ship to hide behind as cover. The missiles uselessly impacted on the surface of that space debris, allowing me to pop out to launch my own attacks. This fully simulated ballistic system is a game changer as careful planning and skill can create ambush, hit-and-run, and bombing run tactics that go well beyond just sending your fleets to die among the stars as you hope the numbers favor you in the final balance. 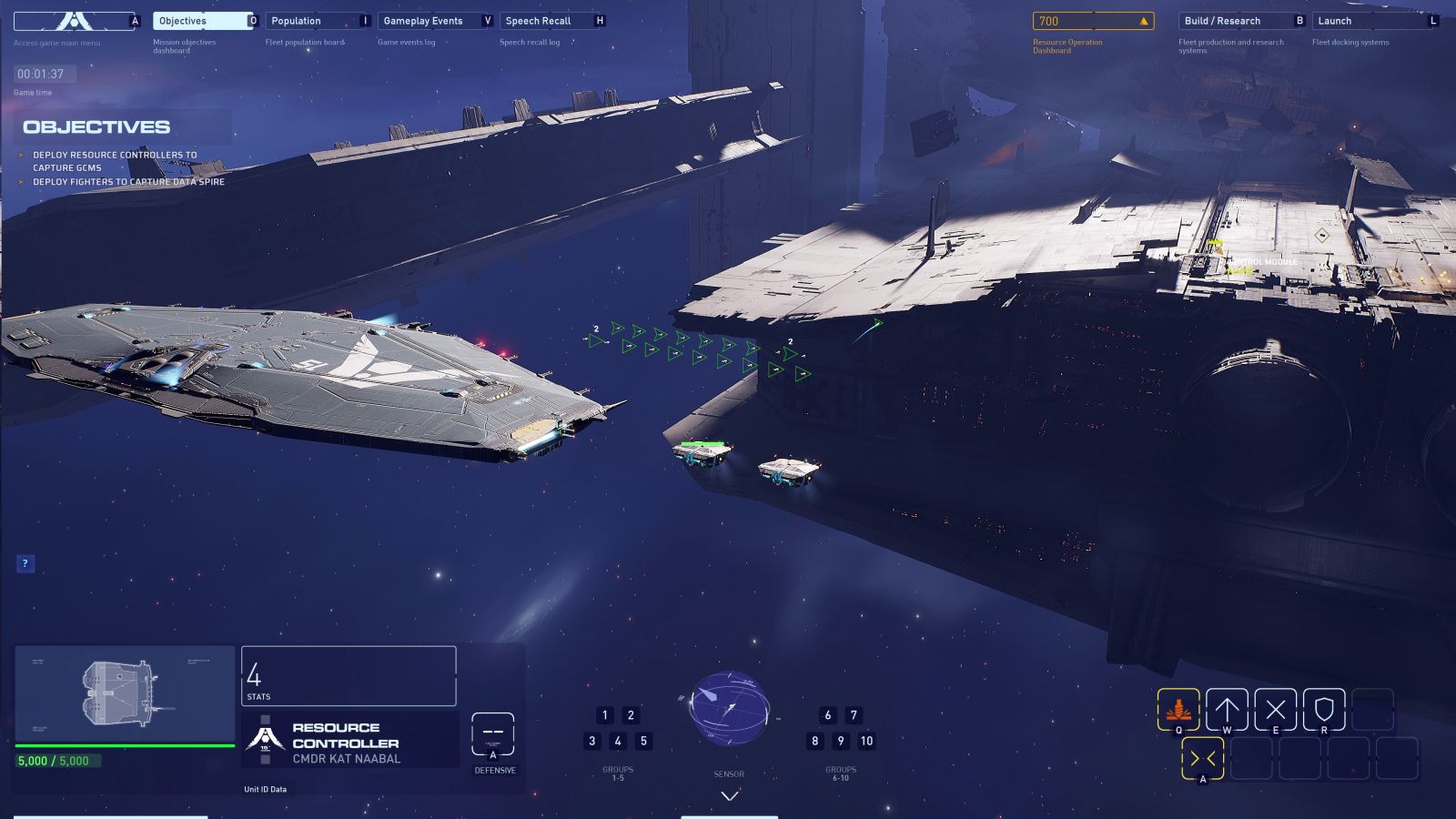 This mission to re-establish the jumpgate showcased the sense of scale once again as the gate itself is massive, as is the derelict capital shipwreck nearby. This ship had long since been looted and stripped, leaving gaping holes where the engines and gun ports once were, and chunks of armored plates floating in space. During my efforts to re-establish the jump gate, I used hit and run tactics of my own by flying my Attack Bomber fleet through the disused ship engine ports. This cover allowed me to swing behind the pirate defenders, flanking and obliterating them in very short order. A frontal assault would have resulted in far more losses as the enemy would have had the opportunity to use cover and surprise – turning the tables felt good, and finding all of these moments in the campaign is exciting.

We didn’t get to experience another new element, but the team described a cooperative mode with a “roguelike twist” that should give us some new ways to play. New elements like particle storms and other environmental hazards will also play into the campaign and multiplayer, so look for future coverage on those elements as we get closer to the mid-2023 launch.

From the melancholy and eerie soundtrack to the comic-style cutscenes, it’s clear that Blackbird Interactive is bringing this franchise back to life in the best way. I came away from my time with the game wanting nothing more than to just play through even this small slice once again to see how I might tackle it differently. These fresh twists on the established gameplay should add replayability and new ways to challenge the player, and I couldn’t be more excited for it. As my fleet swarmed and danced around the enemy, crushing their ships under the weight of our combined firepower, the gate opened. The Khar-Kushan Mothership slowly slipped inside, ending my time with the game, for now, and making one thing abundantly clear – Homeworld 3 is poised to reinvent tactical combat all over again.

Homeworld 3 is slated for release on Steam and the Epic store on PC in mid 2023.