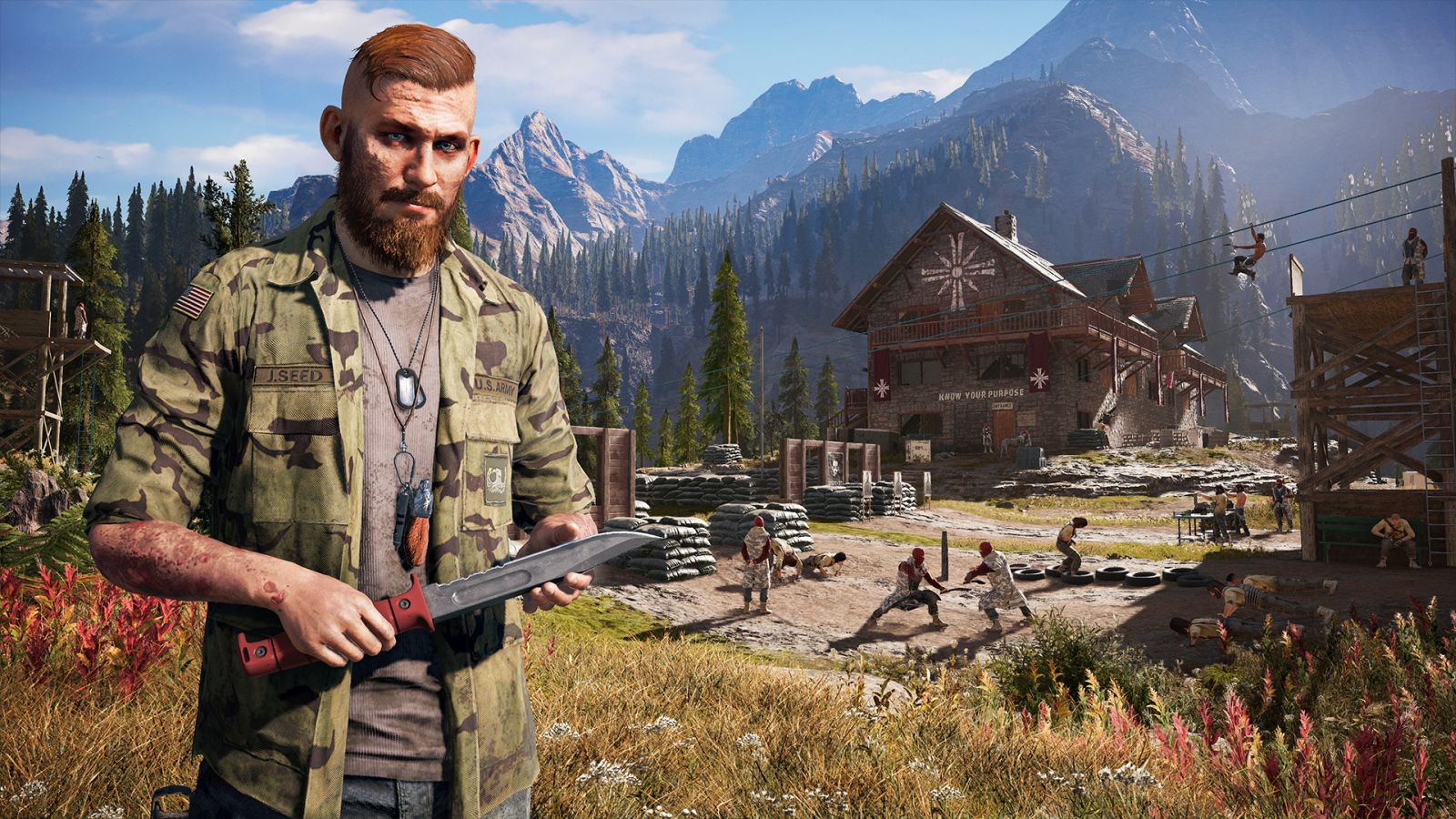 Belly up to the bar and let’s have a chat. I can understand if you feel like you might have a little “Far Cry Fatigue”, given that this is the 10th Far Cry game (though the fifth cardinal entry), and that you are likely a little tired of climbing towers and liberating camps. You might feel like it’s a big world full of meaningless tasks and omnipotent enemies. Well, partner…all that’s about to change.

At an honest-to-goodness ranch well beyond the sights and sounds of noisy California I got to sit down and play a whole lot of Far Cry 5. Rather than what’s typically called a “vertical slice” (that is, a representative sample of typical gameplay), the team at Ubisoft Montreal started the game from the beginning and handed us the reigns. Below I’ll give you a look at solo gameplay, cooperative fun, an interview with the Drew Holmes, Lead Writer, the actor behind The Father, Greg Bryk, as well as a chat with Dan Hay, Executive Producer and Creative Director for Ubisoft Montreal, and a quick introduction of Cheeseburger – a grizzly bear who you can, of course, have on your team. BIG fangs for hire!

If you are interested in the first opening minutes of the game, read on — if not, skip down to where you see the end of the spoilers tag. You’ve been warned.

If you missed the lead-in (and in case you’re wondering, it’s available to read right here), the game takes place in fictional Hope County, Montana. Having been stationed in Montana for a number of years, it looks like every small city I’ve been to in that state, and feels like Billings and Great Falls merged together. Friendly folks, a whole lot of flannel, and omnipresent pistols on every hip are almost a trademark, and that’s well-represented here. You’ll play as a Jr. Deputy on your very first day who has been tasked with arresting a suspected cult leader named Joseph Seed — a man who is affectionately known as “The Father” by his followers, Eden’s Gate. He is to be arrested in connection with a whole host of allegations, the least of which is kidnapping and murder. Naturally, everything goes exactly according to plan — it’s a short game.

When a man comes willingly, you should ask why.

Of course that’s not the case — this is Far Cry! The game starts with the player, the local Sheriff, a U.S. Marshal, and the pilot and co-pilot flying past a massive statue of The Father on approach to an incredibly well-protected compound. The “peggies” (the nickname the locals gave the “Project of Eden’s Gate” cultists) are patrolling around a large church and surrounding buildings, barbed wire creating a maze-like layout likely to confuse any outsider. The Marshall won’t be dissuaded from serving the warrant, despite the shaky objections of the Sheriff’s dispatcher, and the Sheriff himself.

Setting down, we come face-to-face with the “well-armed” and entirely unregulated militia calmly ready to deal with our incursion. Heading into the church we can hear “Amazing Grace” being sung by the congregation as they listen to the proselytizing of The Father. Though he surrenders willingly, serving the warrant triggers the expected response. Calling us the “locusts in our garden”, the congregation becomes agitated, but citing Revelation, The Father commands his flock to “go” before we approach him and place him in handcuffs.

Calmly, The Father tells us, “God will not let you take me” as the team walks the cult leader to the helicopter for extraction. Out of nowhere, the mob turns violent, latching onto the chopper as it feebly wobbles trying to rise in the air. Overwhelmed by the additional weight, the chopper augers into the ground. As we wake, we find ourselves face to face with The Father who tells us the obvious – “No one is coming to save you”. If you thought Vaas Montenegro or Pagan Min had all the stock in crazy, let me assure you that The Father, a “true believer”, is far more terrifying. Even breaking the fourth wall, as we did in this interview below, you can see that Greg’s portrayal of The Father is terrifyingly compelling.

Hanging upside down, we unlatch our restraints as the helicopter catches fire, groaning under its own weight. Making a hasty escape, we snap up a gun from the ground and make our way to a nearby trailer. Miraculously, the U.S. Marshal that was in the chopper with us is alive, and, despite his stunning failure to serve the warrant on The Father, is steadfastly insistent on taking down the entire Seed family. There are few quiet moments in the beginning of Far Cry 5, so naturally the Eden’s Gate followers uncover our hiding spot. Amidst a hail of gunfire, we do our best to escape, but the cult is well-armed, well-staffed, and apparently has air support. Bombing the bridge ahead of us, our truck is thrown from the bridge, flinging us to safety. Unfortunately for the Marshal, he’s taken hostage on the opposite shore. Succumbing to our likely concussion, the game fades to black.

Awakening to an unfamiliar face, we’ve been rescued by a man named Dutch. Dutch reveals that our friends have been captured and split up amids Joseph’s “Heralds”, and with the authorities deeply unprepared to deal with Eden’s Gate, our only chance is to build a grassroots resistance, show the locals that they can free themselves from The Father’s influence, and ultimately overthrow the Seed family to rescue our friends.

From the start, it’s clear that Ubisoft Montreal is pushing the graphical envelope with Far Cry 5. Most recently (like in our AMD article) we’ve been using Far Cry: Primal, Assassin’s Creed Origins, and For Honor to benchmark games, and it looks like Far Cry 5 will be a good addition to that suite. From the forest and rivers, to the mountains and “big sky” of Montana, the graphical fidelity of Far Cry 5 is going to make an impression. Rather than describing it, check out the video above of me tackling the liberation of the F.A.N.G. Research Center, captured on the PlayStation 4 Pro.

The game proper begins with character customization, and for the first time in the series, you’ll be able to create a male or female character. Selecting from eight face types, three skin tones, and twenty eight hair styles, as well as a handful of torso, pants, headwear, and handwear to pick from, and yes — plenty of it is flannel or camo.

“Accept the power of yes” – John Seed, aka The Baptist

There are four ways to build a resistance in Far Cry 5 — rescuing civilians, destroying properties owned by Eden’s Gate, completing missions for Hope County residents, or liberating cult outposts. Before you can get to any of that, however, you need to liberate Dutch’s Island. This small area serves as the tutorial for the game, giving you a chance to learn the controls in a way that ties directly to the rest of the experience.

Wandering through the woods, I stumbled on some cultists beating up a civilian. Carefully and quietly cutting them down with a crossbow, I rescue a civilian. Talking to him, he thanks me profusely, letting me know that cultists are also holding a nearby boat house which hides a prepper stash underneath it. This represents one of the bigger departures in Far Cry 5.

Previously, Far Cry games sometimes felt like an adventure in climbing towers, and then tackling swaths of icons that signified activities. Here, talking with the locals is how you’ll get your missions, and few people know entirely what’s going on. I stood in a barn from 1860 and interviewed Ubisoft Executive Producer Dan Hay on how Far Cry 5 is changing things up for the better.

After one self-aware tower climb (again, the developers are doing away with this mechanic), I closed out Dutch’s Island and opened the entire game world, as well as enabled the multiplayer and cooperative portions of Far Cry 5. Looking north, I see the Whitetail Mountains, home to Jacob Seed — the military trainer of the cult, and the man leading the Whitetail Militia. To the east, I see Faith Seed. Faith is responsible for the chemical called “The Bliss” which seems to mentally break and supplicate anyone subjected to it. In the south, John Seed seizes food, supplies, and worst of all, people. Ultimately, I’ll have to take down all of them, but the world stops holding your hand — Hope County is yours to explore in any way you wish from this point on.

On the map I set my objective — Dutch’s niece, Jess Black, runs a lumber mill nearby, and is ready to cause some havoc. But first, I needed to learn the legend of Clutch Nixon. Clutch is known as the greatest stunt man on planet Earth, and after studying an ancient Wenja ritual, I saw exactly why. The game world continues while you are on these stunt missions, and as you can see below, I damned near hit a moose and splattered a cultist across the bumper of my ATV. Enjoy the madness:

One of the other big features in Far Cry 5 is the “For Hire” system. Guns for Hire lets you bring friends you meet in the world you to help you take down the Eden’s Gate cult. These specialist characters each have a power or skill, such as piloting a crop duster to bomb targets, sniper skills, or silent crossbow work. Fangs for Hire lets the player recruit all sorts of animals such as Boomer the dog, who can stealthily identify any enemies in the area, and fetch weapons to bring back. There is also a cougar named Peaches who can silently take down enemies, using her stalk ability to stay hidden in tall grass. While those two beasts sound like they’ll be amazing characters for my cause, the moment I heard about Cheeseburger, I knew he was the right bear for the job.

You see, Cheeseburger is a massive grizzly bear. Previously housed at the F.A.N.G. Research Center I showed above, Cheeseburger got his name from, unsurprisingly, eating cheeseburgers. Unfortunately, he got “the diabeetus” and now eats a yummy salmon slurry instead. To track him down, I’d have to figure out where the Eden’s Gate folks took him, rescue him, and give him a yummy fish to eat to earn his trust.

Joining with one of the Ubisoft team (“Friends for Hire”), I jumped directly into the cooperative play aspects of Far Cry 5. Recruiting a man I’d rescued earlier named Cliff Lee, we set off to do a bit of fly fishing for Cheeseburger’s lunch.

With our giant furry buddy in tow, we took the fight to Eden’s Gate. While we didn’t have a ton of time to play, I did do a bit of poking around the character skill advancement system. There are a massive 50 skills ranging from items like “Kickass binoculars” that let you mark targets through solid walls, health boosts, and rifle mastery that helps reduce rifle sway, as well as reloading and aiming speed. Beyond the wealth of weapons in the game, the nine specialist characters, and deluge of vehicles, this upgrade mechanic and ability to play all of it with friends, made the game feel entirely new.

Ubisoft Montreal has done their homework, combining some of the best elements of all of their properties into Far Cry 5. I came away from my time with the early parts of the game eager to see more of the incredible performances and writing I’d seen thus far. Far Cry 5 looks like it’s going to be the best of the series, and with a protagonist this hair-raising, easily the most memorable.