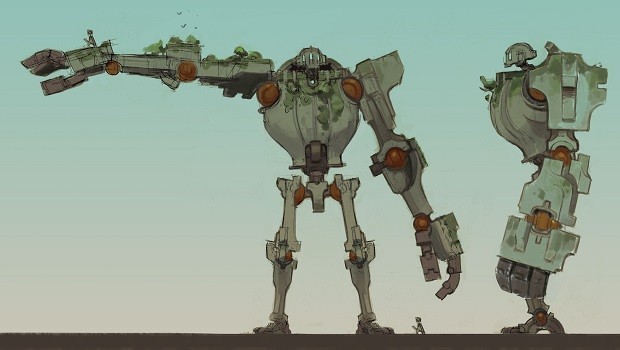 After two excellent action-RPGs, developer Runic Games is ready to make something different. It’s a game they say takes inspiration from the likes of Zelda, Ico, and Journey. After playing the game at PAX Prime this year, I can see how that inspiration is shaping the game. There’s no dialogue whatsoever, Runic wants the narrative to be told through the environment and the silent, gesticulated interactions between the characters. And though there’s certainly an action component to the game, from the slice I played it appears the emphasis is clearly on exploration and puzzle-solving.

Our protagonist is equipped with a large, robotic arm which serves as a utility tool as well as a shield. When enemies attack, you can hold your hand up to deflect, or when you need to navigate across chasms, as an example, it allows you to create a sort of “energy rope” to swing around with. Over time you’ll be able to modify and upgrade the arm in various ways which will open up new gameplay avenues. The combat does resemble a Zelda in the way that you dance between striking, dodging, and blocking, as well as the general simplicity of the mechanics, but it still feels like a subdued aspect of the larger game… which in my opinion is a good thing.

I think Hob takes more pride in its platforming and puzzle-solving than anything else. The world itself has been shifted and transformed into an abstract version of its true self in order to challenge your progress, most of the puzzles I encountered prompted me to manipulate a series of levers, buttons, and boxes in order to re-calibrate the environment so I could continue onward. You’ll also need to exercise agility and coordination to land all your jumps and swings.

Along the way you’ll be treated to gorgeous and unique environments propped up by striking art direction. Hob features a cartoon-like visual style that that gives the artists the flexibility to get creative. Think Zelda: Wind Waker but with a more somber tone.

While on the surface Hob appears innocent and almost childish, make no mistake that this is a dark and dangerous world. When you kill an enemy there is usually a trail of blood left behind, and some areas of the level were adorned with nightmarish imagery. It revels in the dichotomy of dark fantasy themes that have you riveted by your surroundings but also threatened by it.

Hob is still quite early in development and when prodded for a release window, Runic couldn’t give me much more than a vague timeline. My feeling is that the game is somewhere between 12 and 24 months off. They have the vision and the fundamentals of the game nailed down so it’s likely a matter of building out the content and refining the experience. If I could hope for one thing from Hob as it progresses it’s for an increased gravity to the movement, as currently it feels a bit loose and floaty. Otherwise, it’s looking like a fantastic follow up to the excellent Torchlight series.