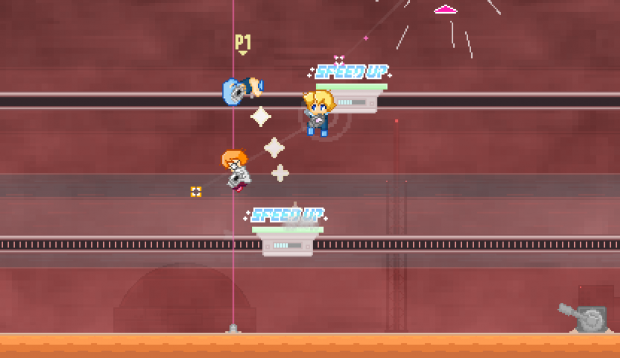 With Iron Galaxy’s recent success as the developers behind titles such as DiveKick and the Xbox One reboot of Killer Instinct, it makes sense they would want to try their feet in publishing. They have done just that as they have three independent games slated for their New Indie Publishing Program — Videoball, Gunsport, and Capsule Force. These titles all feature one major thing in common, local multiplayer. Iron Galaxy’s publishing adventure is banking highly on local head-to-head multiplayer/co-op being a feature that players desire in the coming year.

Do not let the simplicity of Videoball deceive you into thinking there is no strategy to be had during your time with the game.  It puts you into the role of an arrow in a two vs. two battle where you hope to slap the appearing balls into the opponents’ goal. You do this slapping by forming larger arrows in front of you (using X) and shooting them directly at the contested ball. This kicks the ball in the opposite direction and, in theory, into the opposing goal. For myself, it resulted in me shooting the ball directly into the wall. I was pretty good at that.

The real strategy of the game comes into play when you begin cooperating with your partner, which is key. If you hold down X, the arrow gets larger, meaning more power, but it also means your opponent could be using that time to move the ball and muck up your well designed plan. The best way to combat this is to assign one player to the role of just shooting the opponent, which throws them off course and stuns them for a moment. The moment only lasts a second, but a second is all that is needed to turn the game around in Videoball.

You can also continue to hold X and form a square, which can be placed in front of the goal in order to deflect any shots from the opponent. This combined with the gorgeous and simplistic art style make Videoball feel like a promising multiplayer experience. The concept is simple, but the execution seems to be heading to success. It is only a matter of time before Videoball begins its takeover of the universe.

As you may expect, Gunsport is another two vs. two game that draws some similarities to Reptile’s Lethal League. Except instead of using a bat to reflect the dangerous object back and forth, you use bullets and other objects. In the world of Gunsport, the powers of Earth have decided to use the game of Gunsport to settle all issues, these powers include Neo Tokyo, Neo USSR, Blue Cambodia, and everyone’s favorite, The People’s Republic of Oakland. The game will give you five teams of two characters each. The teams, themselves, will have their own special abilities to use throughout a match. To score, you must continue knocking the ball at the opposing team until it either hits the wall behind them, or drops on the ground.

The levels seem to be one of the more interesting aspects of the game. Based in a Cyberpunk universe, everything has a unique shine to it, which is highlighted with bright neon colors bordering certain objects. These levels also judge how many points you can get from shots. For example, the level shown to me featured three areas, one high, one in the middle, and one low, all of which were located behind the player character. The low one netted the scorer five points, while the middle was three and the top was one. You also increase the amount of points you achieve in each round the more the ball is reflected between players. This leads to matches becoming intense to the point where one player may throw down the controller and run away, never to talk to you again.

Arguably the most popular game at Iron Galaxy’s PAX East booth was Capsule Force, a game developed by Eric and Kat Wenske. The game focuses on two to four players as they run back and forth across a 2D plane, similar to Nidhogg. But the real difference comes in the form of being able to shoot your opponent instead of using simple sword combat. You also have two platforms that you must hop onto in order to slide to the next screen. The weaponry is inspired by 80s space anime and features a shield which will repel your enemies projectiles.

One of the biggest things plaguing many multiplayer games these days is what do players do if they do not have a friend immediately available to play a game with them? Thankfully, Capsule Force provides a unique single player experience bolted onto the multiplayer. The game features over thirty-two single player missions. You can choose to do these missions one by one or, instead, by taking on the Extreme Mode, which has you running through all the missions in succession.

This Extreme Mode creates one of the more intense situations you will experience as you progress through the level and must hit every target in front you. You begin the mode with a five second timer and every target you hit adds a few more seconds to your clock. Due to the strict time limit, if you miss a target, that’s your ass. It is not impossible to run back and hit the target, but it is damn near close. Due to the frantic nature of the whole experience, this mode feels like a ton of stressful fun. Whereas many games disregard a single player concept, or half-ass it in other cases, Capsule Force has a solid single player experience as well as exciting multiplayer action.