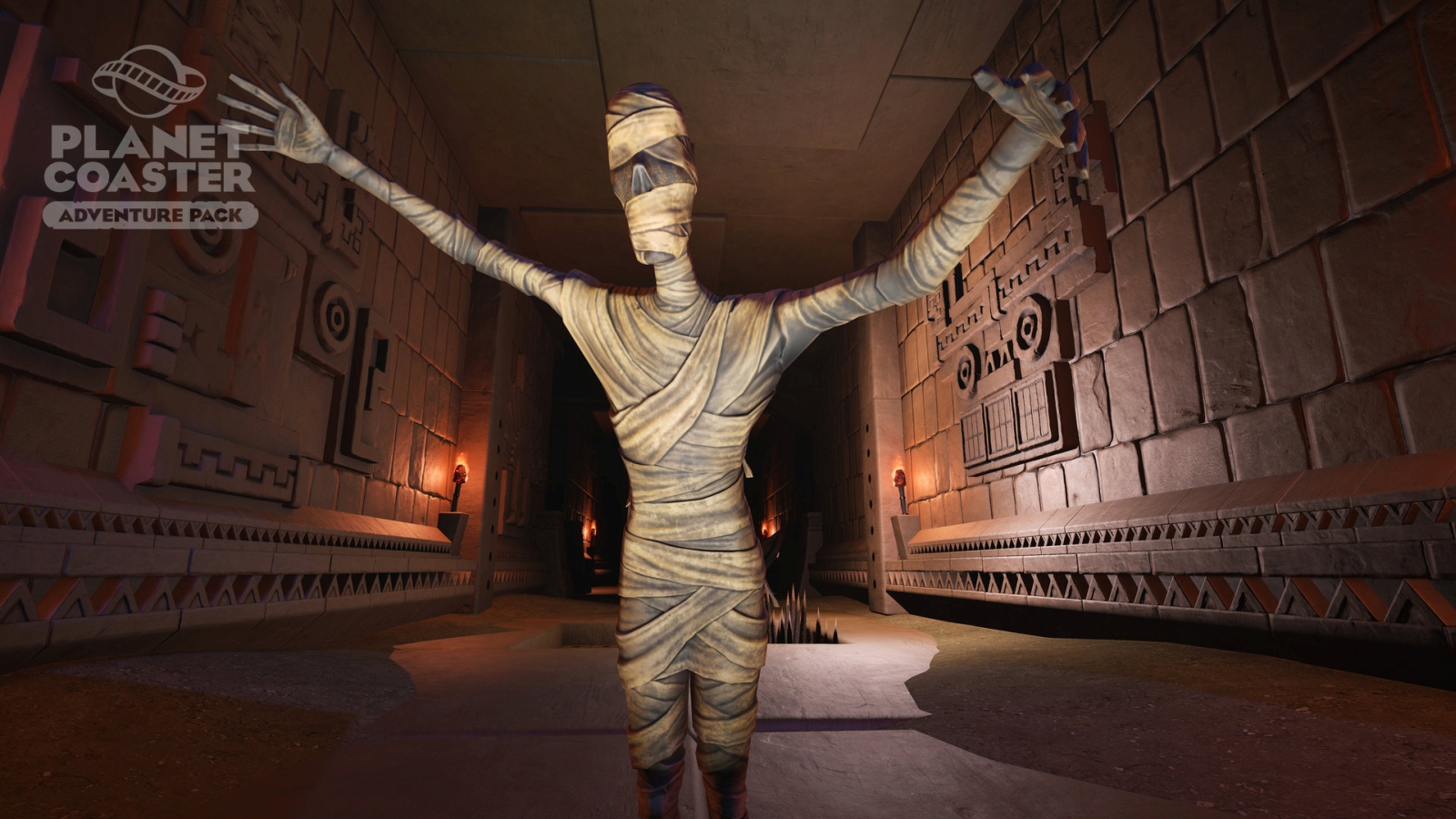 My wife and I went to Universal Studios Orlando just recently, and as we walked through the Islands of Adventure, I couldn’t help but think just how much Planet Coaster (my review) needed an Adventure Pack. Here we are two months later, and my wish has been granted. Packed to the gills with new content, this may just be the biggest addition to the game we’ve seen yet.

Even if you aren’t the creative type, there’s a lot to be excited about this time around. Gold Fever, a new self-contained pre-built swinging mine train, provides an awesome new coaster type with cool new animations. If you’ve ridden the Seven Dwarfs Mine Train at Disney World, it uses the same mechanism, letting the cars pendulum back and forth on a central axis, which you can see in this video.

Pyramid of the Serpent is a massive Mesoamerican pyramid structure with a sprawling rollercoaster running inside and around it. It looks not unlike the Temple of Kukulkan in Chichen Itza, Mexico. It comes in pretty well decorated, but lighting, fog, fire, and extra snakes are always welcome additions. Given that the blueprints included would allow you to create this same structure any way you’d like, I can see people repurposing all of these assets into something even more impressive.

Another pair of pre-built examples are Land Ahoy and Island of Adventure. Land Ahoy and Island of Adventure are boat rides, which we’ve had before. What makes them different is that they have stations, and as such, can be used as transport rides. This means you can, as an example, ring your entire park with this boat ride, carrying your visitors to and from your various themed areas. These also have a sort of trough that they travel through, complete with greenery camouflage, letting them ride about 10 feet off the ground. It also means that they don’t require a body of water to operate – they are self-contained. This would be a fantastic addition to the game for other coaster types – I could imagine jetting my visitors from one side of the park to the other in some sort of high-speed ride.

Not unlike the Jungle Cruise ride at both Disney parks, you can now add in sounds for your boat rides, complete with tinny-sounding speaker effects, which would allow somebody to recreate that iconic attraction. There are several dozen sound effects already represented, including quite a few pre-made tour guide phrases. Folks have already re-created the iconic Disney rides using triggers and sequencers earlier this year, but this will allow you to do it without importing a thing.

If you are a builder, there’s a lot to be excited about. There are 75 building items, 323 scenery items, audio options, blueprints, effects, and so much more. To match the decor of the Pyramid of the Serpent is a series of statues, both intact and in various stages of decay and rubble. Four varieties of crashed planes, as well as cargo trucks that have gone off-track and into a quicksand pit (or a water pit – you can always modify these pre-built options) filled with angry animatronic alligators are ready for immediate placement.

One of my favorite new additions are some of the animated booby traps. Rather than making one solid piece, the team at Planet Coaster instead created items like a giant stone fist that slams a nearby wall utilizing several gears. Another structure is a set of steps that lead up to a set of doors concealing a swinging pendulum trap as little purple scarab beetles scurry around underneath it. Similarly, another pre-built trap has a skull that opens its mouth and pours lava into a basin, controlled with the sequencers introduced in July of this year. Spikes, saw blades, fire, water wheels (with real waterfalls!), swinging doors, a giant ball and chain, rolling cement and lava boulders, spinning spikes, battering rams, posts that crack and break, and more immediately make me want to start building a big Indiana Jones or Mummy-themed coaster. As usual, all of these pre-built or partial piece builds can be repurposed and deconstructed. I can’t wait to see what the community comes up with.

The plane additions are awesome.

To help spruce up this island adventure, there are a dozen different crocodile types, and about as many hippos. I really have to take my hat off to the team as these animatronic animals are absolutely superb. Little tails flick on the hippos as their feet gently rudder their swim through the water, their eyes open, they open their mouths, and they look incredibly (but deceptively) cute. The crocodiles swim on a track, jump out of the water, snap, and are sure to scare the pants off your guests.

If hippos and alligators aren’t your thing, there are also a few new adventurers, a shocking variety of snakes, plenty of scarabs, a whole mess of scorpions, and a massive disembodied giant scorpion. I’m sure these are best used when reaching from a dark place to scare your guests, but I intend to use the rope bridges and scaffoldings and the giant claws to create new ways to make my guests jump.

Beyond new coasters and theme pieces, there are a number of pre-built shop buildings. Statues with large trees over them, as well as a mini-pyramid for a Tikichiki food vendor. Your hat vendor has two new hats, naturally – a crocodile hat, and an awesome “rock” hat which looks like a Mesoamerican headdress. There’s also a number of great shop decorations, including a new façade shaped like a giant tiki-face. Coupled with the absolutely huge number of palms, moss, undergrowth, ferns, weeping-style deadwood, banyan, stalactites and stalagmites, hanging vines, and an embarrassment of riches in terms of façade decorations and gemstones, you’ll be able to build whatever sort of treasure-themed milkshake-dispensing awesomeness your mind can create.

There is a huge update for those who like to build from scratch. You can now select a grid size, all the way down to 1m. I have no doubt that this feature will be one of the most well-received goodies, even beyond the wealth of objects included in this update. To dress up your existing creations, or to spruce up anything new, the team has also delivered a plethora of new effects. Falling, bubbling, exploding, and pooling lava, a larger variety of fire (and you can’t have too many varieties of that, am I right?), geysers, some new smoke and dirt puffs to go with the giant falling traps, and more. The belle of the ball, however, has to be waterfalls. There are a number of nice approximations on the Steam Workshop, but now you can place these as single objects, and they look magnificent. They even included pools that bubble to show the impact of the water from two different heights. Naturally, all of these come with requisite sound effects. Garbage bins, customizable signs, new arches, spiked-poled fences, and plank wood walking paths round out the new flooring for adventure-themed areas.

To help attract your guests to the areas of the park you’ve built for them, there is a new object called a Vista Point. These objects build up a bit of prestige over time, attracting guests to come and look at whatever it is you’d like them to see. Doing so gives them a bit of a happiness boost, and you as the player get to feel happier that they saw the awesome thing you spent 20 hours of your real life creating. You don’t have to drop in hidden gold chests or jam fireworks into an area any longer.

The new storefronts are inspiring.

While previous DLC has been impressive, I am completely floored by what this Adventure Pack has to offer. The items are plentiful, and the animations are a massive step up from previous packs. It really makes me excited to see where the team takes Planet Coaster, and even more excited for Jurassic World Evolution.

Planet Coaster’s Adventure Pack is available now for $10.99 via Steam.