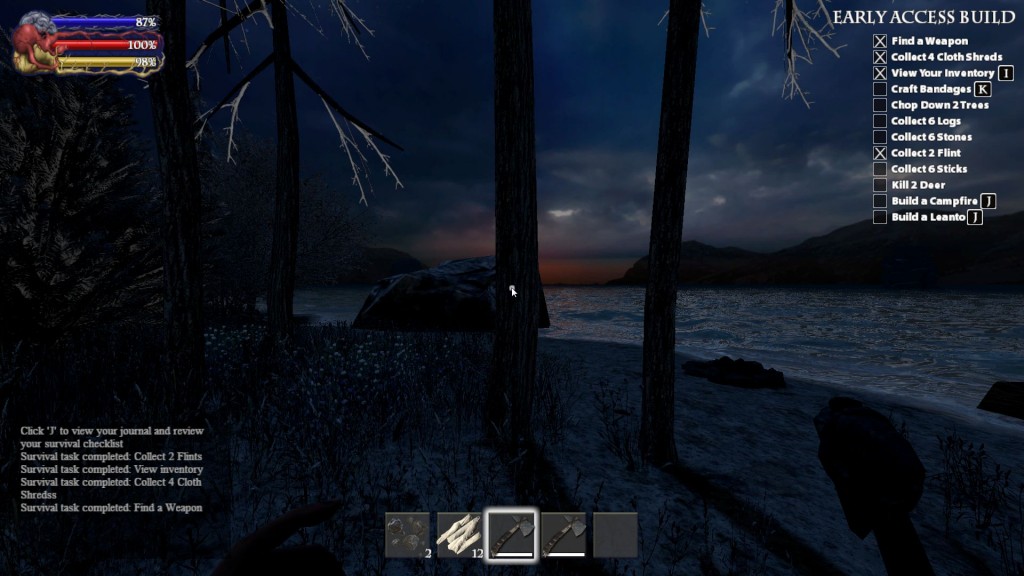 Savage Lands from Signal Studios and DigitalDNA Games is that latest Steam Early Access title to try and put a fresh spin on the sandbox survive-a-thon genre that seems to be all the rage right now. For you Steam Greenlight regulars, you probably know exactly what to expect already: a desolate, open, dynamically generated world, an environment generally hostile to the player’s existence, and a whole lot of scrounging, scavenging, crafting and dying. Savage Lands’ iteration of this blueprint skews heavily in the fantasy direction, and I’ve managed to put some hours into exploring the world and struggling to survive. Honestly? It’s somewhat solid at this stage of the game, but not really at the point where it’s clear this will be a hit rather than a miss.

First things first. There’s a lot of talk going around about Savage Lands feeling like a survivalist-themed version of Skyrim, but really, that seems to mostly come down to the fact that the game’s setting takes place in a cold, snowy forest area with a swords-and-shields theme. That’s compatible with the nordic life, I will grant you, but if that’s all it takes to make a game Skyrim-like, then northeastern Pennsylvania functions as a live-action Elder Scrolls simulation five months out of the year, so long as you stay away from the buildings. The point is that Savage Lands feels less like Skyrim and a whole lot more like a desolate freezing wasteland whose only human inhabitants up and died a while ago. Considering the theme is supposed to be solitary survival, that’s fitting.

Isn’t it pretty? Stay out of the water if you don’t want to freeze to death immediately.

So far the fundamentals are implemented in this game – your basic melee combat, your tree-and-ore harvesting, the ability to scrape together ingredients to fashion primitive implements of survival and so on. There’s also a day-night cycle implemented in the game, and though it doesn’t seem to matter all that much yet, it’s a feature I always welcome in a game like this, if only because of what future possibilities it may present in terms of shaking up the experience of the environment. Promotional screenshots show some more fantastic creatures to encounter, which will no doubt promptly tear the player’s head off for the crime of being in its general vicinity for more than five seconds, but so far my forays into the forest have only lasted long enough for me to encounter some deer, wolves and death by starvation and/or freezing.

“Freezing” is part of the whole vaguely nordic feel of Savage Lands, with emphasis being placed on warm clothing, fires, and shelter. This adds another dimension to the whole “try to survive” aspect of the game, and to be honest, I wonder if it may not be overkill. Savage Lands is particularly unforgiving when it comes to just plain keeping yourself alive, and between the somewhat rapidly diminishing hunger meter and the frostbite risk, it’s even more difficult to survive than it usually is in this sort of game. For players who like a challenge this may be welcome, but as odd as it is to say, I prefer to meet my end at the hands of large, dangerous things or other esoteric oddities. Starving and freezing to death is the exact opposite of exciting compared to getting hunted down and mauled by a pack of wolves. In Signal Studios’/DigitalDNA’s favor, there are wolves, and they will bite you to death on sight, so at least there’s that.

Is there such a thing as a non-primitive flint … anything?

On the crafting front, Savage Lands so far offers a decent spread of basic survival-tools to create – various grades of axe and hammer (which can be used to kill things, or just farm wood and ore from the all too obvious resource points), increasingly powerful varieties of clothing, and ultimately some better and better forms of shelter, ranging from little quasi tent-like structures to proper homes complete with nearby blacksmithing points. The crafting of structures is a bit more scripted – expect less Minecraft-style modularity, and far more in the vein of placing pre-fabricated structures and running around repeatedly dumping resources on them to complete their creation. While that sounds like a creativity-stunting design decision, this is something I welcome – hopefully Savage Lands turns out to be a game with a bigger focus on gameplay and exploration than tapping the unlimited resources of the human imagination. Sometimes it’s nice to play a game and experience someone else’s imagination for a little while.

The most unfortunate thing is that right now, Savage Lands is a bit of a barren game. Even in the short time I’ve had to review it, more has been added – complete with just-released PVP functionality – so I can at least report that the developers are continuing to work on the title at full throttle. But between the Early Access state and the game’s barebones survivalist genre, the fact is that there’s just terribly much more to report on it at this point. So far the implementation is solid, if not wholly original, and it remains to be seen if the game will end up standing out among the throng of competitors in this particular genre – the multiplayer, day/night cycles, and emphasis on freezing will at the least put it a step ahead of some of its closest competitors.