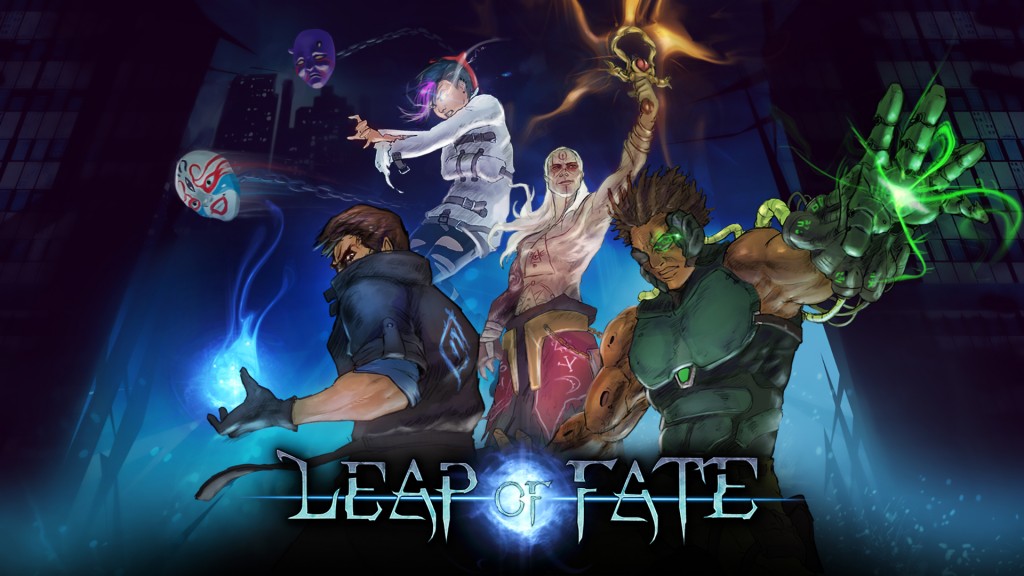 The roguelike category on Steam continues to expand at quite a clip, with developers finding more and more ways to innovate and experiment with the whole ‘dynamic content and permadeath’ routine. Leap of Fate is one of the more recent titles to take a stab at the genre, and it’s currently percolating in Steam Early Access. Billing itself as ‘a rogue-lite with a unique blend of hack-and-slash, cyberpunk and cards’, this title manages to give off a unique, Shadowrun-ish vibe while presenting a new spin on the usual approach to dynamic roguelike gameplay. I’ve been pounding away at it for a while, and I’m happy to report it’s shaping up nicely – and turning into a game that manages to offer entertainment in relatively quick doses, while still providing a feeling of progression over the longer course of playing the game.

Come on, they all have to be left-handed too? As if they aren’t freaky enough.

Looking at the screenshots, it’s easy to write Leap of Fate off as a pretty straightforward game: you play as one of four (two currently available) characters, each with their own appearance and abilities, and you run around blasting enemies in a top-down third person isometric arena. The usual aspects are here: the action-focused gameplay based around shooting and dodging, the power-up experience, and of course the usually-inevitable permanent death penalty which has your character starting all over again from square one in the case of a severe enough screwup. That sort of experience is enough to send most people packing, though Leap of Fate is a bit more forgiving than most on this front: there’s a currency system in the game which allows you to buy a second chance at life if you’ve stored up enough cash-equivalent, as well as an unlock system that allows you to slowly but surely build up more and more power for each of your successive playthroughs. It’s a bit reminiscent of the Dead Rising series in this way, where there’s an actual sense of progression even if you’re starting over from the very beginning again and again.

While the game is explicitly billed as a ‘rogue-lite’, the one area where Leap of Fate is tactically thin is in the character abilities. Characters are restricted to a single standard ability, plus two special (and limited use) abilities on the side, though specials can be changed during the course of the game. There are a variety of upgrades available, both in the form of per-playthrough boons as well as permanently unlocked buffs linked to the in-game achievement system, but these upgrades are largely passive in nature. In truth, I didn’t find myself pining for a deeper system than what Leap of Fate already provides – like The Binding of Isaac, this is a game where twitch skills are center stage, and a tight handful of abilities pairs well with this sort of experience.

Intelligent use of barriers is essential, especially when a machine gun turret has a bead on you.

While the action is not too surprising – WASD to move, left click to shoot, and a couple other buttons to use your special abilities – the layout system in Leap of Fate is fairly unique. Reminiscent of the unrelated Hand of Fate, Leap of Fate discards the usual dynamically generated dungeon system for a card-based progression system. Picture this: each ‘level’ is dealt as an arrangement of cards in a pyramid formation. The cards represent different challenges – single-room confrontations with swarms of enemies, sometimes with particular victory conditions (Each shot is a one-shot kill! Kill this particular monster last to succeed!) At other times, the card just provides a boon to the player – granting a per-game ability upgrade, or some much-needed healing. It’s a refreshing change of pace from the usual dungeon-crawl roguelike titles are known for, and while a bit more variety is needed (and hopefully on the way), I’m happy to say: it works. The result is a game where challenges are taken one step at a time, leaving the player having to make decisions about which cards to go for and which, if any, to leave untried.

The feel of the Leap of Fate world also stands out compared to the usual roguelike experiences – ‘cyberpunk’ just isn’t a popular theme, for whatever reason. While the game is thin on story – another genre mainstay – the world manages to leave a distinct impression: dark and gloomy urban areas are the main fare here. Enemies tend to be cut from a similar cloth, ranging from bullet-spraying mecha-monstrosities to the more weird and infernal-biological threats. A bestiary which provides some flavor text about the various creatures encountered during the game would be a big plus – games like this are usually more interesting to learn about in an in-game unlock way, as opposed to having to sit through a formulaiac story. That said, there’s a nice selection of achievements in Leap of Fate, typically tied to unlocking permanent character upgrades – but also allowing for story-based unlocks. I admit, I haven’t seen much of those yet, owing to a combination of a lack of skill (this game can be punishing) and a more focused interest on the gameplay than the details.

I see you’ve selected the pacifier-sucking raver card! This bodes well for you, at least if you’re into clubbing.

The short of it is that Leap of Fate is a promising roguelike title, offering up a rarer-to-find cyberpunk setting and a relatively novel approach to dynamic content generation. We’ll be keeping an eye on this one as more content shuffled into the deck, and in the meantime those of you who are willing to brave the Early Access waters can check this out on Steam.