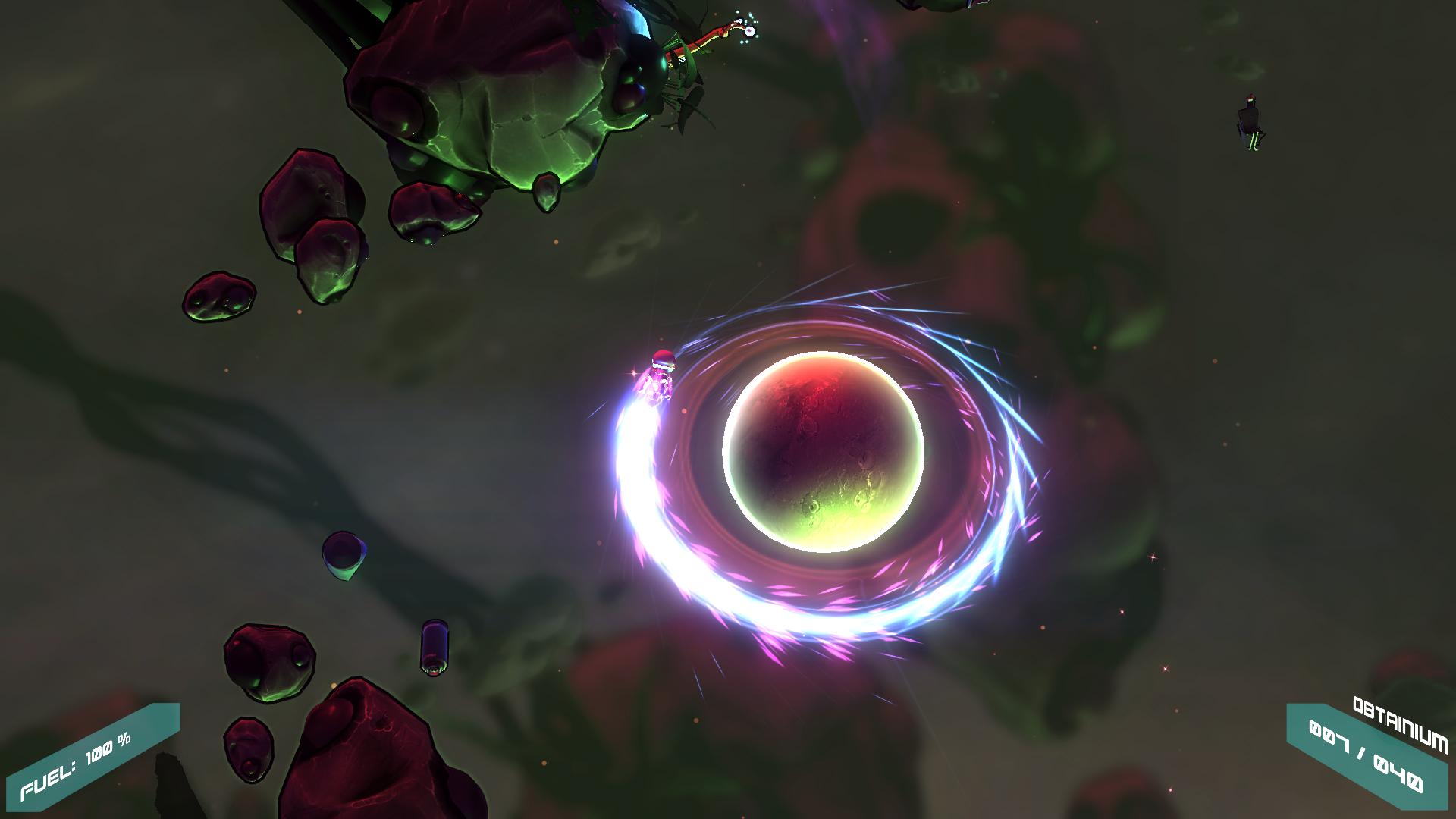 PixelNAUTS, an indie Canadian developer behind the environments in 2013’s Contrast, were at the Playstation Experience with their new space-based speeder, Lost Orbit. I got a chance to check it out and chat with developers Chris and Alex, and die a few hundred times along the way.

Lost Orbit follows a spacefaring astronaut named Harrison, shipwrecked with nothing but his jetpack. Guided by a strange green friend, you must guide him through fields of astroids and other dangers to get home. Hitting any obstacle means instant death, and by the time you get going at top speeds, most deaths end up looking similar to the ending of a Wiley Coyote cartoon.

You could take the game slowly and methodically, but who would want to? This game is about speed!

In flying through space, you’ll have to collect both fuel to keep your jetpack going, and obtainium, the game’s cheekily-named minerals. Collecting all of them is key to getting the best score possible in a level, but players will have a good time trying to find every bit of obtanium in every level.

It’s gleeful fun to speed through a level, trying to beat your best time and find all the collectibles while also trying to not comically splatter into objects. The game starts out with simple dodging and flying, but soon introduces planets, which allow you to either enter orbit and speed up for a boost, or simply boost next to it for a slingshot effect, Apollo 13 style.

Planets add both a potential for speed and a hazard. Messing up your entry into orbit could mean another splat on the rocks.

As the levels progress, even more features get added to the mix. Portals that redirect you and minerals to collect litter the vacuum of space, and soon the game is as much about making split-second adjustments as it is about pure speed. Flying through space is very enjoyable, as the faster speeds build up tension, and even a tiny adjustment too far could result in a headlong crash into spacerocks. Luckily, the checkpoint system is very forgiving, allowing you to jump back almost immediately after death and go again.

There’s a number of upgrades you can use to improve Harrison’s equipment as well, speeding up his boost abilities and other aspects as well. There’s also leaderboards and a multitude of levels to keep you coming back and competing for score. I’m certain speedrunners and perfectionists will certainly enjoy getting the best times possible.

There’s a large variety of locales, even in the depths of space, and the colors and effects blend beautifully.