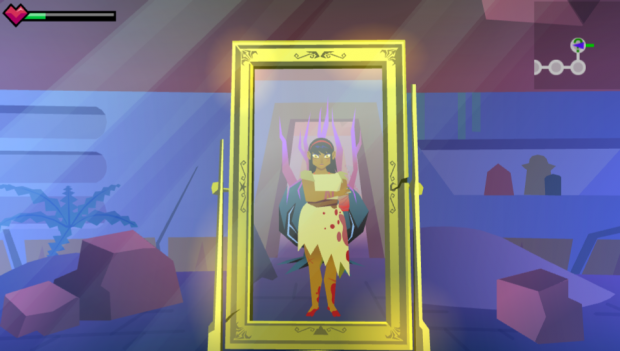 Drinkbox Studios’ new title, Severed, was announced at the Playstation Experience event among a sea of indie games featured for the Vita. If its striking visuals and interesting swipe mechanics didn’t catch your eye at first glance, well, I’m here to shove your face into the screen.

Severed is a first-person action-adventure title, one part old-school dungeon crawl and the other part, a hack-n-slash. In Severed, you take on the role of an enigmatic one-armed heroine. You use left and right to pan, moving forward and back through a beautiful world broken up by nodes on a map.

Your character is quiet and ambiguous, and often you question what exactly you’re looking for amidst the ruins and forests.

Designer Chris McQuinn described each node as a cylinder of 2D art wrapped around to create a 3D atmosphere, as you move through different rooms and dungeons to find keys to progress.

The game starts out slow on combat; first you learn the basics of swiping to attack, and then using swipe to parry as well as counter-attack. The movement is fluid, and creates a smooth back-and-forth of parry and attack, almost resembling strumming a guitar or swiping with a paintbrush.

The art style is striking, and really shows off the Vita’s chops at rendering Drinkbox’s beautiful artwork.

Soon, however, enemies learn to attack you in groups. At this point, you’ll have to use your pan to change your center of focus, managing enemy attack timers and looking for openings to unleash your swiping fury. Enemies start out easy to read, but monsters start to almost grow and adapt. Some must be whittled down to find their weak point, while others only expose their weak point in a small horizontal area, requiring you to slash accurately rather than swipe like a madman.

If you manage to pull off a strong sequence of moves without being blocked or attacked, you’ll be rewarded with a sever – a quick event where you must sever the enemies’ limbs to kill them. Doing so rewards you with items that you can spend to boost your stats, and boss severs reward you with new abilities. I didn’t get a chance to test out the new ability I won for severing the demo’s boss, but I did get to see the reward I received – an intimidating crown made of the boss’ own armor.

Enemies gradually scale up in difficulty, forcing you to understand their patterns and adapt to new situations constantly.

The story is told through both flashbacks and small moments littered around the areas you explore. An early, haunting moment has you looking in a mirror for the first time after starting the game – a sudden realization of your lost arm and the appearance of a sword in front of you all come together beautifully, without any spoken dialogue. The game’s aesthetic also lends itself nicely to the plot, as each area, enemy and character is poignant and stands out from each other.

Drinkbox already had a smash indie hit with Guacamelee, and Severed looks to be another fantastic title for the studio when it comes to the Vita in Spring 2015.