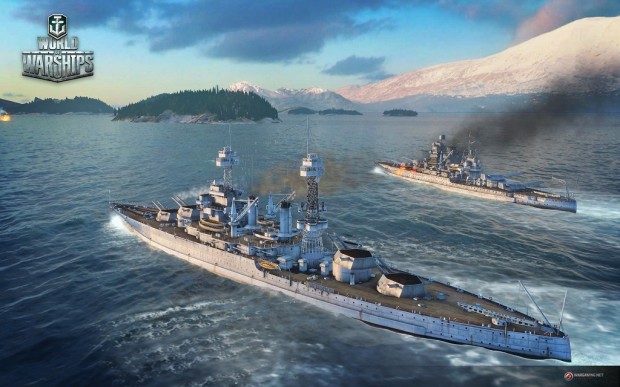 During E3 we got a chance to take a break from the noise and chaos to sit down with Gareth Luke, Sr. Producer at Wargaming to get a brief look at World of Warships, as well as a glance at some of the World of Tanks products we’ll see in the near future.

The team at Wargaming has been working on World of Warships to add to their cadre of combat action-sims, and they’ve not been sitting idle. Even at this early alpha stage, what I was shown was a vast improvement over their previous showings. The first thing I noticed is how much the team has focused on accurate depiction of scale. Maps are over often hundreds of kilometers in size, which is important when a beast like the USS Idaho can reach nearly 19 miles with her 14” guns. The next thing immediately apparent is the level of detail that Wargaming was putting into each and every warship. Using the same example, the real-life USS Idaho sported a dozen 14” guns, 14 5” 51 caliber weapons, four 3” short range armaments, and a pair of 21” torpedoes, and that destroyer was built in 1914! More modern battleships easily have more than double this number, plus automated anti-aircraft and anti-missile batteries. Wargaming had the difficult task of bringing each and every one of these weapons to life, firing and targeting independently! If you were wondering what was taking so long, you don’t have to look much further than this bit of detail.

Cosmetically, the game has also seen a vast upgrade. Graphical shaders have also been significantly improved. Using subsurface scanning, Wargaming is delivering water surfaces with multiple layers. The armor on ships look like steel, not painted onto the surfaces. Rivets gleam in the sun as the camera swung around the battleship. While these models aren’t final, they are a significant upgrade from anything we’ve seen thus far from Wargaming, even eclipsing the detail in World of Tanks.

Digging into the details we took a look at the four classes of ships we can expect from the game. World of Warships will feature four levels of naval vessels on release – Destroyers, Cruisers, Battleships, and Aircraft Carriers. Destroyers are the fastest and lightest (relatively speaking) of the ships, serving as fast attack boats. Using smoke screens they can slip in and do incredible damage with their close quarters torpedo compliment. Cruisers are the middle class of ships, featuring decent armor, scout aircraft, anti-aircraft guns, and deck-mounted guns. This ship class will be your first line of support, and your largest source of support. The Battleship class is absolutely huge, featuring ships that are heavily armored, very slow, nearly impossible to sink, and armed to the teeth. Sporting ranges above 30km or longer, these beasts can unleash over 150 guns all targeting independently. The final class of ships is the Aircraft Carrier. These ships operate more like a real time strategy game than a direct combat weapon. From the rear echelon of your fleet you’ll launch scout, dogfighting, dive bombers, and torpedo planes with deadly purpose.

Scout planes are a major part of your battle strategy in World of Warships. Given the incredible distance at which you can engage other vessels, finding other ships is paramount. Using fast attack ships or scout planes you can dispel the fog of war for a better look at the map. Switching to a top-down full grid view of the map, you can set waypoints for the scout planes, allowing them to investigate and report back as they uncover the selected grids. Given that ships are able to fire at vast range, and over the top of small islands, having scout planes helping to sight in targets will be paramount.

In a quick gameplay demonstration we set out in a Cruiser class vessel. Within just 20 seconds we’ve engaged another ship at 13km away, using our long guns to pepper it in the distance. Loading high explosive rounds we engaged a battleship, using our superior maneuverability to dodge the incoming volleys from the steel beast. As we closed distance we opened torpedo ports, causing a semi-circular grid to appear for launching and targeting. Selecting a wide arc, we launched several torpedoes, switching to a torpedo cam as they struck our selected target broadside, sinking her in short order. You are able to tighten this arc for greater lethality, but also allowing it to be widened for a wider shot arc. We got a rough demonstration that light and midsized ships also carry torpedoes as we found ourselves struck by several, sinking our vessel into the deep and closing our demo a bit prematurely. As we all laughed at our accidental misfortune it did demonstrate nicely that, despite an incredible scale and rendering all the way to the horizon, this game features some pretty fast action.

While we don’t have any sort of release window for the St. Petersberg studio-powered title, the team is very committed to bringing these beasts of steel and gunpowder to life. Just as with their previous games, all ships will be built on actual blueprints of weapons that were either fielded or designed but never released, ensuring as much authenticity as possible. Based on what I’ve seen thus far, they’ve clearly learned a great deal from the launch of World of Warplanes, taking player feedback to heart. We’ll keep you posted as we move closer to leaving port with this already-impressive looking title.

The World of World of Tanks
Before we headed back to the fray of E3 we got to check out some of the upcoming World of Tanks products we can expect very soon, starting with World of Tanks Blitz. This mobile title launched in Europe six weeks ago, immediately roaring to the top of the App Store charts. We went hands-on with the tablet-based app and came away impressed. It’s clear that the bar was set very high for this game as it is essentially World of Tanks but can be taken on the go. Utilizing all of the hard work they’ve put in on the flagship PC and Xbox 360 titles, they’ve brought over 90 tanks to life at launch, delivering graphical quality fairly close to the game running on high detail settings. With an average play time of over 60 minutes per session, it’s clear that they’ve succeeded. The game is coming to the United States after a bit more testing in Europe, and it’ll be free-to-play, so there is literally nothing stopping you from trying it for yourself.

On the Xbox 360 front, World of Tanks has been extremely popular. At over 3.8 million downloads in 86 different countries, roughly 10% of ALL Xbox Live users have played World of Tanks since its February launch. Wargaming has also released their first major content update last week, introducing Soviet steel into the game. With platoons that’ll allow up to 7 of your friends to join as a group coming in an upcoming patch, the team is heavily focused on the Xbox 360. Surprisingly, given that World of Tanks is a primarily digital product, Wargaming is also partnering with retail channels to bring a retail sku to shelves. Rather than just a disc with 7 gigs of data on it, the retail product will also give you an exclusive German Tier 2 premium tank, 200,000 silver, 3 days of Premium status, 1,500 gold, 30 days of Xbox Live, and all at a price less than those items would come in piecemeal.

Closing things out with the PC, the team at Wargaming are ready to celebrate the World Cup. The April Fools Day video they showed with tanks playing soccer? Yea, that’s a thing now. Launched on the 17th, you’ll be able to play World of Tanks Football through June and July. This mode will be limited to just those two months, so get in there and play some Soccer…er, I mean Football.