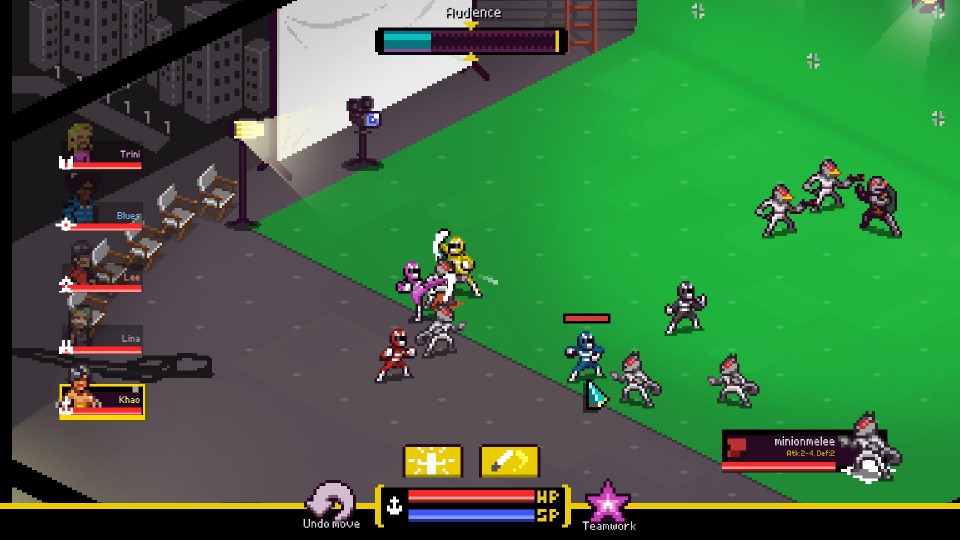 Some games have you save the world. Some have you rescue the princess, or journey to a foreign land. But how many let you take over a studio and produce your own sentai TV show? Well, Chroma Squad is here to save the day, one episode at a time.

A clever turn-based RPG with a management metagame, Behold Studios’ Chroma Squad is all about the audience. You play as a group of stuntmen who, after being fed up with doing all the work and getting none of the credit, decide to start their own studio and produce their own shows. Sentai, for those unaware, are shows that revolve around costumed superheroes with superpowers, who can form together to make some sort of super-being; think Power Rangers, or Captain Planet.

Those familiar with turn-based strategy games and RPGs will feel right at home here.

Chroma Squad definitely plays up the Power Rangers references, though, with not only color-coded heroes on your team, but a giant robot that you can form and plenty of aerobics on the side. As you combat enemies, you’ll have to build up the audience meter and complete objectives to make the best episode you can. Producing a good show means better equipment, nicer cameras and mics, and bonuses for your actors.

As manager, you’ll handle every aspect of the show. Determining equipment for each character, leveling up their skills and handling their actions in combat. Outside of recording episodes, you’ll also have to run marketing campaigns, purchase equipment for the studio, manage funds and listen to fan requests.

There’s plenty of equipment to buy for your team to increase combat effectiveness.

I got check out Chroma Squad’s PS4 build at the Playstation Experience, and what I played made me very excited for the final product. Battles weren’t just about moving your allies according to strategy, but also setting up acrobatic maneuvers and teamwork options to pull off the flashiest finishes on enemies.

The story of the game is very tongue-in-cheek as well, with plenty of parody and comedy to keep the story going. As the game progresses, the main stuntmen begin to believe that the episodes they film are becoming real, and their banter during and between missions is hilarious. There’s plenty of references to shows like Power Rangers and Captain Planet as well, so fans of those Saturday morning shows will be right at home here.

You’ll customize each character with items and cosmetics, along with serving a specific role within the squad.

Look for Chroma Squad to hit the PS4 before the end of 2014.